The Bathroom Manufacturers Association (BMA) Conference hosted a Big Debate to discuss if current routes to market are sustainable, with the emergence of click and collect and growth of online. 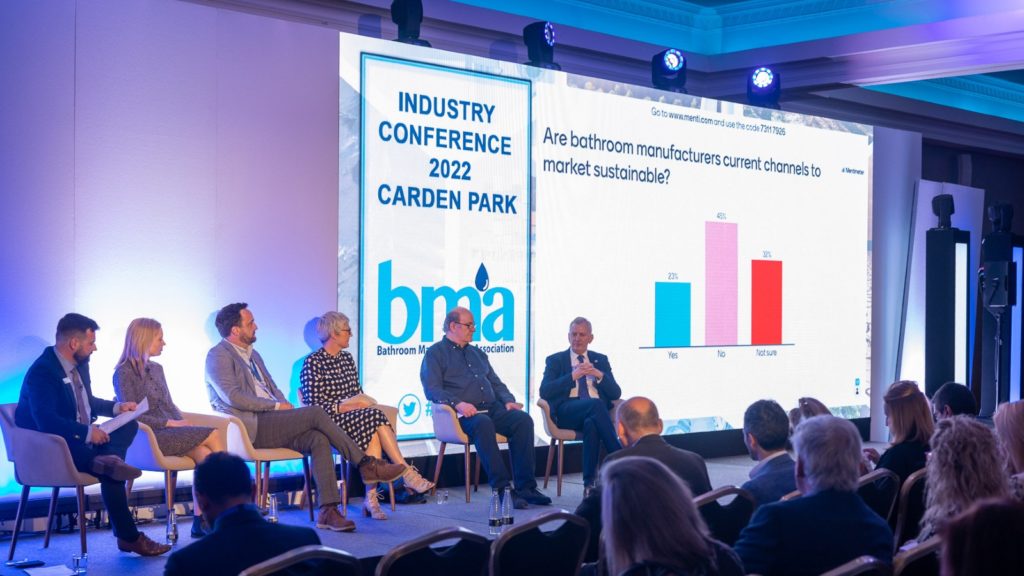 Kickstarting the discussion, at Carden Park Hotel, audience members were asked to vote on whether existing sales channels for bathroom manufacturers are sustainable, with most (43%) stating ‘no’.

Chief executive of the BMA Tom Reynolds hosted a panel of industry experts who highlighted the importance of bricks and mortar routes, together with online sales, and considered how the channels were cementing their future.

John Newcomb of the Builders’ Merchants Federation stated merchanting was a “very healthy” sector with sales up 30% on last year, which were up 20% on the previous year.

And he stated the future for construction sales was also strong for merchants, both in new build and retro-fit opportunities.

The Covid pandemic saw a change to traditional routes of supply, with the growth of digital sales, and the panel explored whether this rise was sustainable.

Account development manager for home and garden at eBay Rosalind Bridges stated the online platform saw a growth in sales of building materials during this time.

However, John Newcomb of BMF warned manufacturers against choosing an online only strategy, stating merchants help break bulk and also have the direct relationship with local tradespeople.

He stated: “The bigger issue is when manufacturers choose to go direct online, bypassing traditional forms of distribution. I know that is being discussed in several boardrooms.”

But Rosalind Bridges also pointed out eBay can offer manufacturers and retailers a dual approach to building their customer base, as she commented: “It’s normally new customers we bring to them, not cannabilising their existing customer bases.”

In fact, Dave Rushton from Eureka Research stated online should be used as part of a repertoire of sales channels, as he pointed out tradespeople use up to four outlets when buying bathrooms.

The need for omni channel sales was supported by Mike Rigby from MRA Research who said a third of tradespeople still go into store, as well as Jane Blakeborough of TrendMonitor who added: “We do know that online sales during Covid rocketed. We also know 72% of all retail sales took place in a physical store in 2020. That’s a huge number.”

Driven by the pandemic, merchants embraced digitalisation, with the sector offering the likes of click and collect, which John Newcomb said is part of the adaptation of merchanting but not the only future.

The panel agreed the need for merchants and retailers to meet the changing needs of their customer base will be the most important factor in the sustainability of sales channels.

Jane Blakeborough explained: “Consumers are more confident and have certain expectations. They expect speed. They expect personalisation. They expect to be able to have online interaction and choice.”

She stated DIY used to be dominant but now consumers are buying across a variety of channels and concluded: “I think the power of the consumer has grown during lockdown. They have expectations and the channels to market will survive if they meet these expectations.”