Reacting to a video interview, held at the outbreak of the COVID  pandemic, kbb expert Toby Griffin says working at home will now  "be a permanent fixture" and it could reverse open plan living, as consumers demand quiet, closed spaces.

Reacting to a video interview, held at the outbreak of the COVID pandemic, business consultant at KBB Support Toby Griffin says working at home could reverse open plan living.

He says his initial thoughts of the lockdown lasting “at least weeks” was a “slight understatement” and  pointed out the first lockdown actually lasted three months, which was subsequently followed by two more national lockdowns and tiered systems.

However despite the lockdowns, Griffin said: “The second half of last year was possibly the busiest I’ve ever known in the industry” and said installations from orders at the second half of 2020 kept retailers going in the first quarter of 2021.

In the exclusive video series by Kitchens & Bathrooms News #KBNOne2One, Griffin said a year ago the potential of working from home “is massive” and remote supplier meetings and design consultations “will become completely natural.”

And he still firmly believes working at home will “be a permanent fixture”, whether full-time or hybrid, which could “slightly” reverse open-plan living, as consumers may demand quiet, closed spaces: “It has been automatic people have taken out the wall between the kitchen and the dining room and making a kitchen diner. Now, that will continue to be the case because it’s a lovely way to live.

“But if you are likely to be working at home for long periods and possibly for the rest of your career are people going to start looking to having an office at home, meaning small spaces that are quiet, that are walled?”

Griffin has been surprised clients hadn’t taken up full remote design service and produced the numbers of clients he expected in 2020.

But he pointed out it could be due to ‘hibernation mentality’ during the lockdowns and also due to the fact older people, who have more disposable income following the pandemic, haven’t yet embraced the technology.

However, he still believes there is a future for remote design and said it has been a kickstart and will build.  Griffin added: “As I did say [last year], it has to be in the portfolio of a “retailer’s services.”

Kbb showrooms are now open but to ensure they are meeting COVID prevention procedures many are operating as ‘appointment-only’.

Griffin says the ‘appointment only’ system is beneficial not only to manage customers and workflow, but to reduce the number of ‘tyre kickers’.

“A year ago, we were staring down the barrel of a gun, really, and everyone was wondering if they were going to have a business to go back to and pretty much everybody has done.” 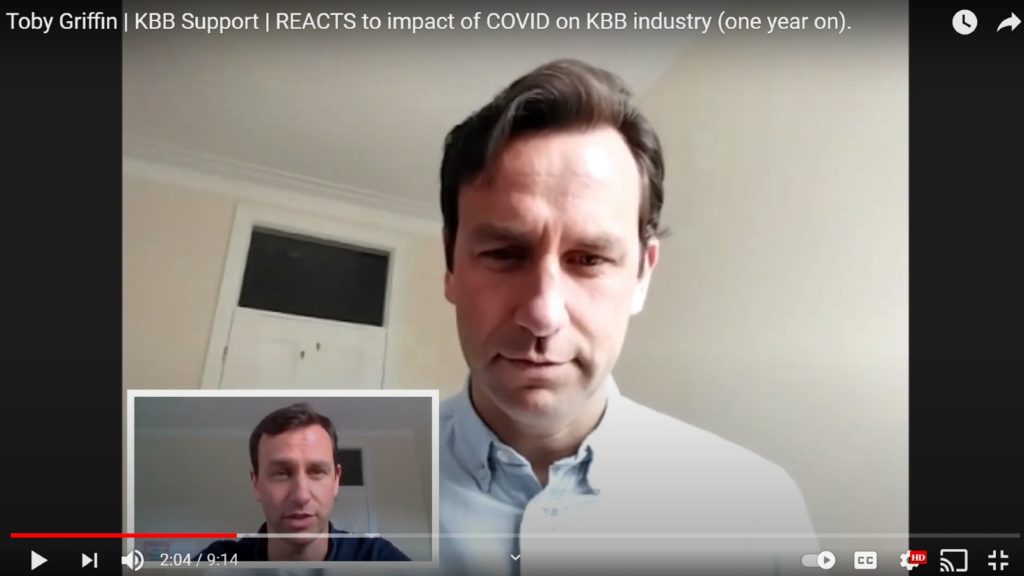 Griffin pondered on when furlough comes to an end, whether this situation would change: “What will happen when all these schemes end will be interesting, because I wonder if there are a few businesses which have been kept afloat and once that umbilical cord is cut, then the truth will be out.”

However Griffin believes we will get a second bounce out of retail sales, with the easing of lockdown restrictions in 2021, similarly to 2020, and stated: “I would presume we will see the same thing again. I don’t see any reason why not and from what I see and hear, it’s already started.”