Haier outlined its ambition to be number one appliance group in UK & Ireland by the end of 2023, at its 1 Vision conference.

In a return to a physical version of its 1 Vision conference, following the COVID pandemic, Haier outlined its ambition to be number one appliance group in UK & Ireland by the end of 2023. 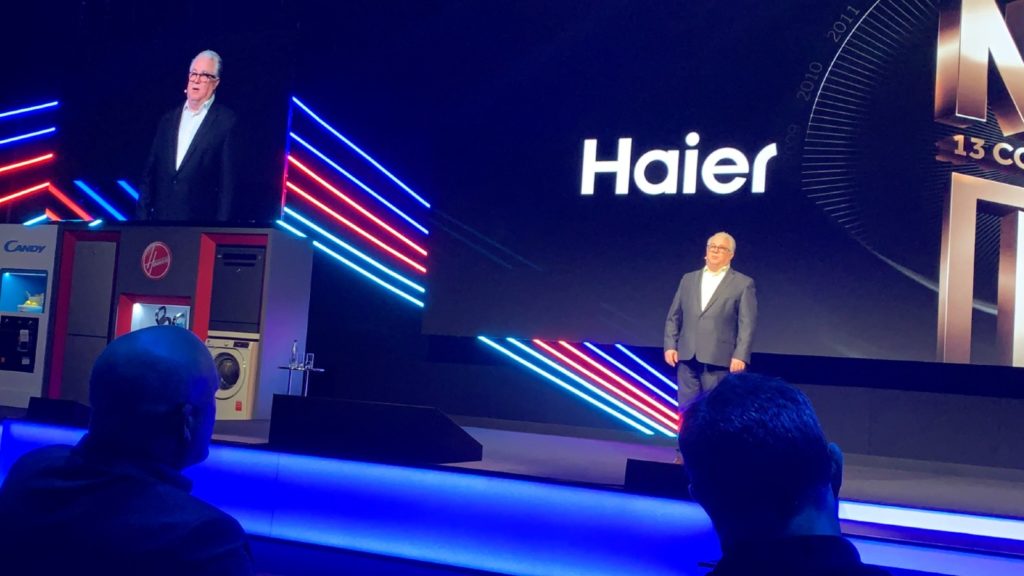 CEO of UK and Republic of Ireland David Meyerowitz

Opening the conference, CEO of UK and Republic of Ireland David Meyerowitz said the company planned to leverage group resources and experiences.

He stated: “We are afforded the luxury to dream big, with confidence, in the knowledge that we can leverage the winning resources and experiences of Haier in order to repeat their global successes right here.

“Together, we can harness the strength of this proven winner to provide the foundations on which to build our own dreams and our ambitions.”

He said the group, which owns Hoover, Candy and Haier brands, had been working to prepare for a much bigger business, including the expansion of its HQ in Birchwood, Warrington and launch of brand activation centre.

Meyerowitz said the built-in appliance business had an original vision of delivering 500,000 units in 2022, which was achieved in 2021, with growth of 65% on the previous year.

He commented on built-in sales: “This is an incredible business that has doubled in size within the last three years.”

Sales of its premium brand Haier were also reported at 65% growth, which Meyerowitz said made it one of the top 30 fastest-growing Chinese companies in the UK.

He also stated last year the group had sold 1million connected appliances in the UK & Ireland.

But he said it wasn’t enough just to sell more, the company also increased value by optimising its brand positioning and grew value of its built-in, freestanding cooling and freestanding washing machines.

“Our dream is to be supplier of choice for our trade partners and to help us to be number one in the UK and Ireland by the end of next year,” stated Meyerowitz.

CEO of Haier Europe Yannick Fierling reported the company has been the fastest-growing appliance manufacturer for the last three years in Europe and for the sixth year in a row it is the biggest appliance group in the world.

He stated the company has been developing an “ambitious but also practical and articulable” plan for the next five years, including moving from a product to an experience offer.

It intends to open its ecosystem offering services for smart appliances, such as weather.

As part of its growth strategy, Haier has invested €71million in a cooling factory and increased capacity for tumble dryers up to 2million pieces a year.

In addition, it is set to shortly launch a €45million dishwashing factory in Turkey, with a cooking factory also planned in the same country, to open in 2023.

He exclaimed the vision of the group remained “to enter into the top three home appliance companies in Europe by 2026.”

Fierling concluded: “We want to have 100% of our appliance connected between themselves and also with third parties. Our mission is to increase our turnover five-fold within the next five years.”