Italian kitchen furniture manufacturer Minotticucine celebrated its 70th anniversary with the launch of its Terra kitchen made in solid cast bronze. 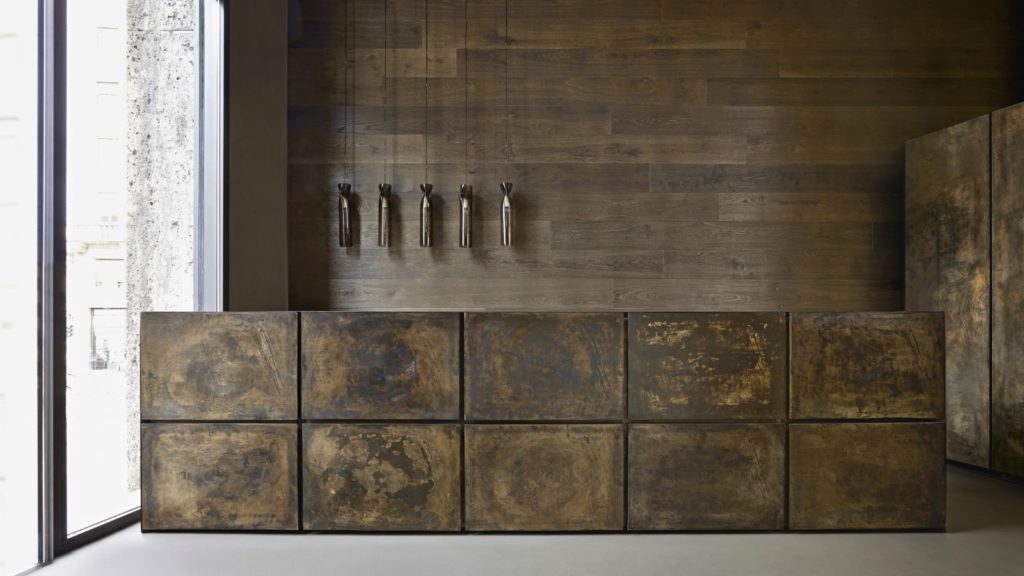 It is on display in the company’s Fitzrovia’s London W1 showroom, along with its Seta Silk (behind glass) kitchen and solid stone kitchen displays.

To create the solid bronze kitchen, the company worked with craftsman to melt and sculpt the molten metal made from bronze ingots.

Poured into moulds, the casting process of the liquid bronze gives each kitchen its own texture and patina.

According to world-renowned architect Claudio Silvestrin, who designed the Terra kitchen including the solid bronze creation, it is “a pure force, an element of weight and of art.

“Innovative and inimitable, provocative, simple to say but extremely difficult to realise. In a word – unique.”

Speaking about conceiving the Terra kitchen, Silvestrin said: “I imagined an object that is useful and functional and presents itself with the same strength as nature: solid, timeless and abstract.”

Minotticucine was founded in 1949 by Adriano Minotti, with his son Alberto Minotti taking over the company in the late nineties

In 2003,  Alberto Minotti met Claudio Silvestrin and Terra  –  the first kitchen to be made in solid stone – was launched.

Minotticucine is a part of the ASSO Group, which is owned by the Venturini and Zardini families.