CEO of Bathroom Manufacturers Association Tom Reynolds reported shipping is still the biggest concern for the industry but said it will be a short-term problem.

CEO of Bathroom Manufacturers Association Tom Reynolds reported shipping is still the biggest concern for the industry but said it will be a short-term problem.

The global issue follows countries shutting down during the pandemic, with containers not in the scheduled places, and the subsequent surge in demand following the lockdowns.

Speaking to Kitchens & Bathrooms News as part of its video interview series #KBNOne2One Tom Reynolds said the issue had taken a “long time to unwind and unravel.”

He commented: “Shipping is causing an awful lot of concern and is the most business critical issue for most manufacturers.

“Companies are investing management time trying to work around [the issue] and consult with their customers about the way forward, keeping a good line of communication.”

The shipping issues have seen an “enormous” spike in costs for manufacturer, as Reynolds reported a container was £1,500 for a container and is now £10,000-£15,000 to ship a box from the Far East. 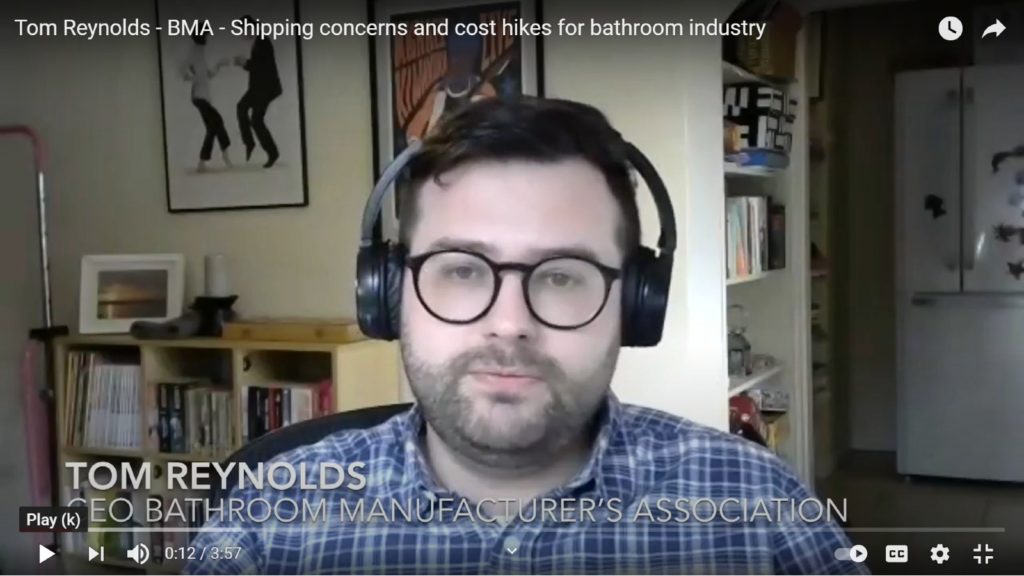 Reynolds said: “The reason for that is the North European routes aren’t as attractive to the shipping companies as the trans-pacific routes and they price the shipments to make it more competitive for them. That’s an enormous additional cost manufacturers have been having to soak up

He stated it some cases it has seen an eradication rather than erosion of margin, adding “there are some murmurings in the marketplace that those cost increases and surcharges have been introduced already.”

He added: “The shipping lines have made record profits over the past few months. You do wonder where the financial incentive lies in them sorting out this issue.”

However, Reynolds believed the shipping issue “was pretty short term”, as he added “the market will settle. Hopefully sooner rather than later. But I can’t see this becoming a long term structural issue for the industry.”

The BMA recently had to postpone its conference, for the second time running, due to the ongoing travel restrictions.