This year's show sees greater appliance participation, a return of brand names as well as new and established exhibtors

The UK’s largest show for the kitchen, bedroom and bathroom industry Kbb Birmingham is set to take place on March 1-4, 2020 at the NEC. 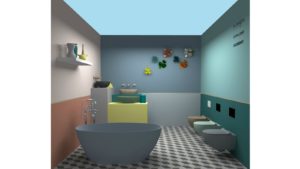 Although measuring around the same size as the event in 2018, with similar exhibitor numbers, the show sees a greater representation of appliances and a return of brands such as Zanussi, Bosch, Neff, Siemens, as well as Alno.

And despite its longevity in the market, Kbb Birmingham has still welcomed debutantes to the event, such as Aquaella Brassware and Atlanta Bathrooms.

Sales director of kbb Birmingham Jon Johnston said: “We always get some new stuff and it’s really exciting to see that flow and that continuation of new exhibitors coming to the show.”

However, he also pointed to the importance of long-standing exhibitors of the event, adding: “We mustn’t forget that some people have supported the show for a long time, bringing new design.”

Johnston said he was particularly pleased to see British design coming back to the show, with the likes of LochAnna Kitchens, alongside German companies.

As well as exhibitors, the event will feature concept sets in the atrium “to give people some experience before they’ve even walked into the show.”

In addition, kbb Birmingham will also play host to bathroom and kitchen features inside the halls.

Joining forces with The Kitchen Education Trust (TKET) and Rob Mascari of Mascari Designs, students of the Foundation Degree in Kitchen Design will be creating their vision of the future.

Johnston added: “We have partnered with Virtual Worlds to bring those concepts to life, so we can really feel and see what the minds of those students are looking at.”

While the bathroom hall will include a feature, looking at personalisation, which Johnston says depicts the storyboard of what the show is all about.

Mindful of the current health climate, Kbb Birmingham recently closed its Chinese Paviilion and  will feature signage around the show, reminding visitors how to avoid the risks of catching the Coronavirus.

Having faced criticism about the length of time it took to make the decision to close the Chinese Pavilion, Johnston stated it was due to legalities.

He said the organiser had to wait until each Chinese exhibitor informed Kbb Birmingham they were unable to attend the show, before it could release a statement.

Discover which companies will be exhibiting at the show in our preview of Kbb Birmingham.

Miele pulls out of IFA and Kuchenmeile