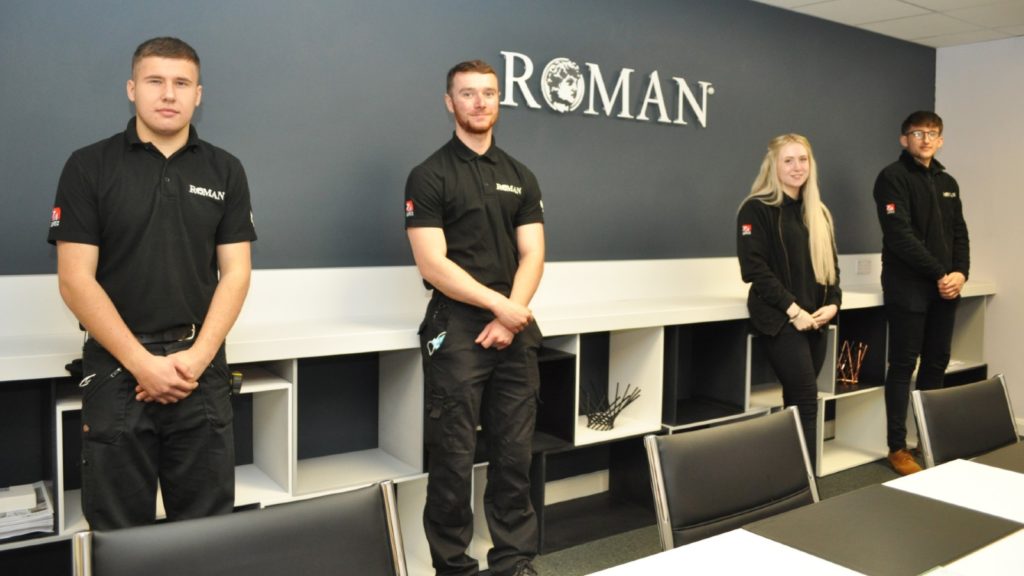 Leah Scott, 16, and Connor Gillard, 18, are both undertaking an apprenticeship in Design Engineering.

While Adam Barnes, 22 and Joe Wilbraham, 18, are on an apprenticeship in Mechanical Engineering, after pursuing their careers at Roman following college.

Roman has had an ongoing student apprenticeship scheme running for over 20 years.

Design engineer apprentice Leah Scott commented: “I’m developing invaluable skills and knowledge at Roman by gaining experience in over seven departments which have allowed me to gain a full rounded understanding of the company, and I feel prepared to kickstart my ambition to become a Design Engineer.

“Whilst gaining practical and experience, I am thoroughly enjoying the balance between learning whilst learning and studying towards my Level 2 Qualification.”

Connor Gillard, design apprenticeship, said he was also already gaining skills and experience:  “I am commencing my Design career at Roman and I have already gained some necessary skills to help further my progress in this sector.

“I have also used my prior experience in the Roman assembly process to widen my knowledge of the products I now design and I’m very excited for my prospects in the future with the company.”

Roman believes apprentices are a foundation for young people to go on to a career in the bathroom industry, and reports there are examples of this at the company.

Mechanical engineer apprentice Joe Wilbraham, who joined the company in October 2020, is already working on his own projects: “I have been able to experience different departments in depth and understand how they work.

“This has helped me to understand the production process much better rather than just staying in one department.

“I have also been trusted with my own projects which has helped me to grow and made it much more enjoyable. I am excited for the future ahead and to see how far I can go and what I can achieve working for Roman.”

Adam Barnes originally worked in production for the company, and has taken the opportunity to progress his career:  “I started Roman working on Line 5 and wanted to progress, so when an apprentice engineer role became available I applied.

“Since I started my apprenticeship, I have loved every minute of it. I have enjoyed learning new skills in work and in college, also working here I have been given freedom to design and create my own projects.”

Roman believes apprenticeships are now more important than ever, following disruption to education following the pandemic.