We discover how ceiling and pendant-style cooker hoods are holding firm against the emerging market for pop-up downdrafts and venting hobs.

We discover how ceiling and pendant-style cooker hoods are holding firm against the emerging market for pop-up downdrafts and venting hobs.

With pop-downdrafts and venting hobs an emerging sales trend, you could be forgiven for thinking this is the only future path of extraction.

However, industry experts point out for the kitchen island space there is still a market for both pendant and ceiling extraction. 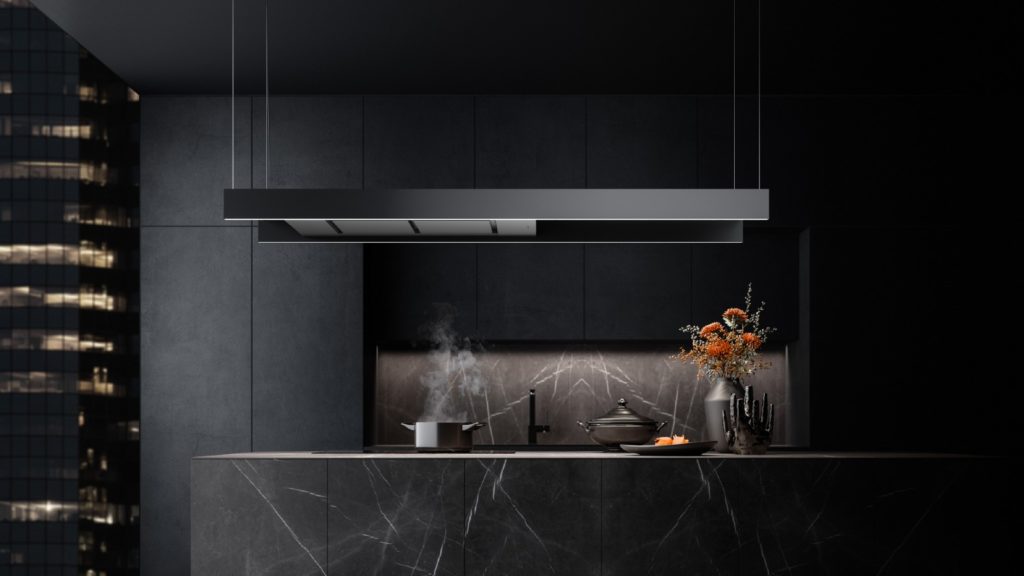 Heading up the sales team at Falmec UK Ron Blount points out: “At Falmec, all types of cooker hoods are available in the range, including pendant, ceiling, integrated and downdraft models.

“Around 15% of our sales are for pendants and 20% for ceiling models with probably 40% now integrated into cabinetry.

“The rest are for vented downdraft models, a category that has seen – and continues to see – a significant increase in demand, particularly in open plan kitchens.”

In fact, Falmec, Faber and Caple have all recently introduced pendant hoods on to the UK market, from ultra-thin suspended models, though to structural designs with open storage and lampshade designs. 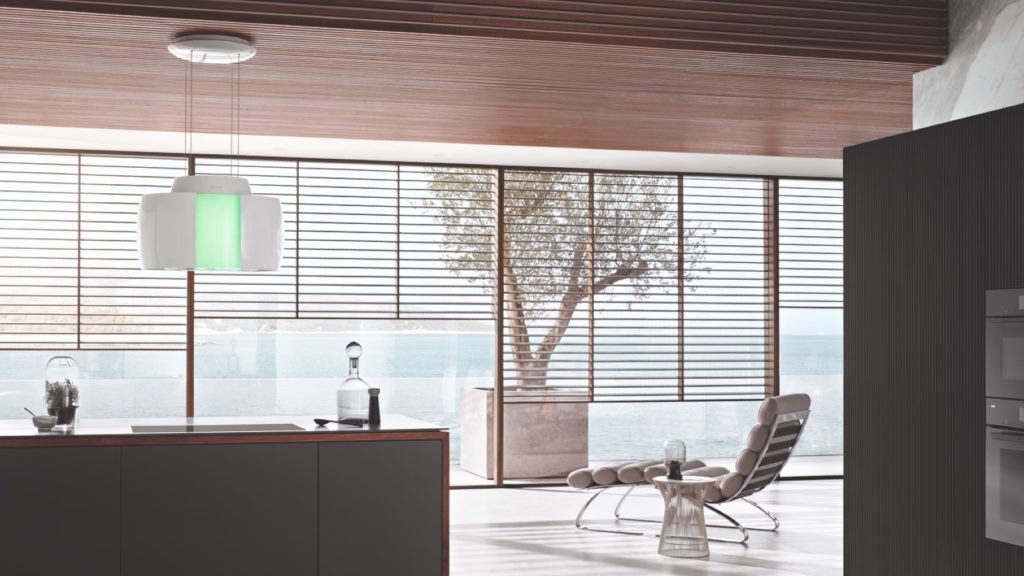 The Aura 4.0 from Miele  is a recirculation cooker hood, which has adjustable colour lighting and fragrance and is operated by Con@ctivity 3.0 technology, which means it can work in unison with a compatible Miele induction hob

And pendants boast high-tech features from Miele’s extractor with mood lighting and fragrance, through to Falmec’s air purification system.

So pendant extraction is far from outmoded and old hat.

In fact, with the advent of the rise and fall cooker hoods, positioned over the hob when in use and retracted flush into the ceiling when not in operation, it calls into question if pendants could even become a hybrid form of extraction. 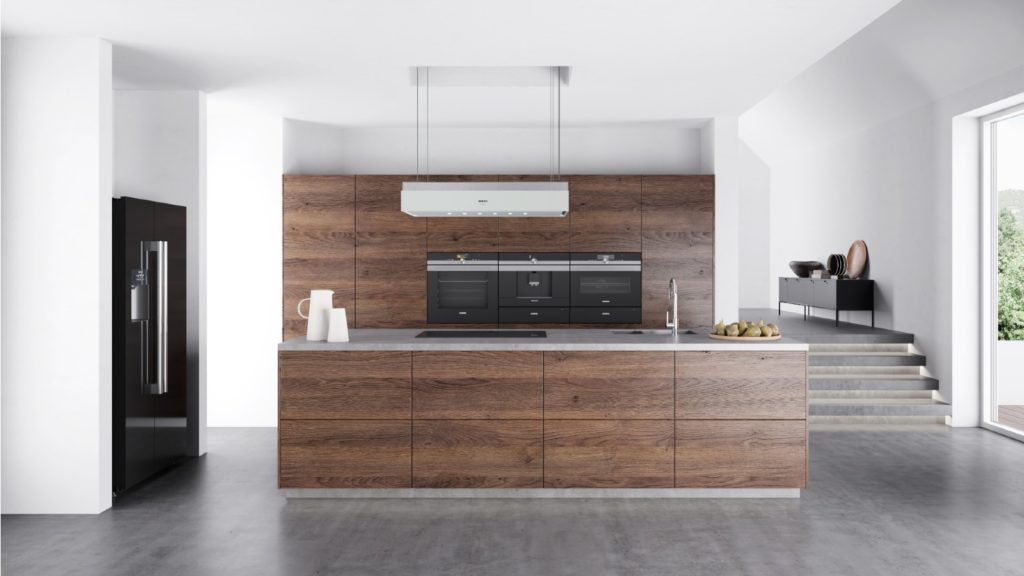 Part of the Siemens iQ700 collection is the varioLift studioLine ceiling extractor, which can be lowered when in use and retracted when switched off. It is operated by cookConnect, which controls the hood from the hob.

Industry experts also point to the flush-fitted ceiling extractor as being key to their sales for above a kitchen island. 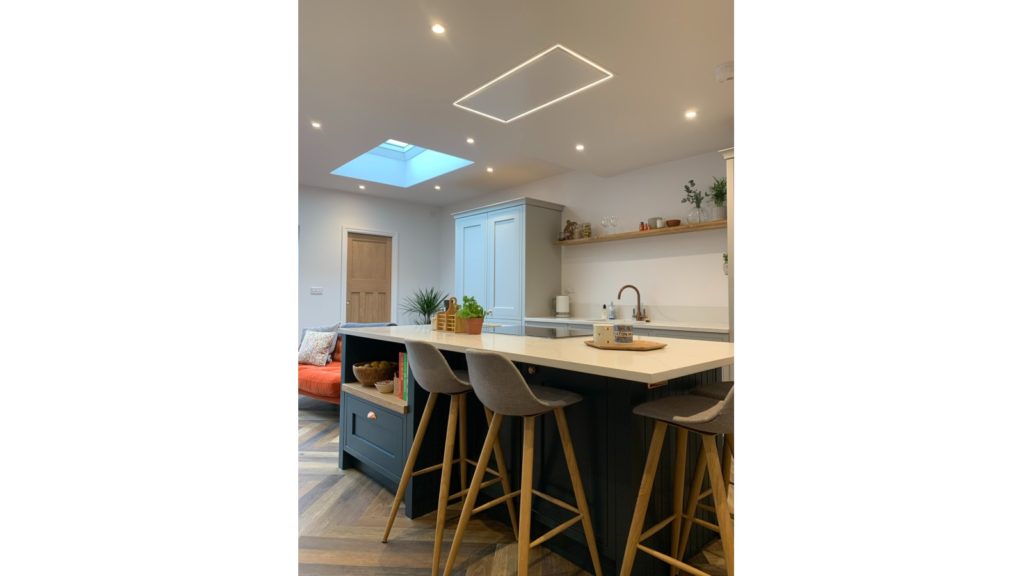 Sense 360 from Miro is available with a choice of 3000K warm or 4000k cool LED perimeter lighting. It has three speeds boasts a 1mm profile and comes in a matt white or black finish

The popularity of the cooker hoods is also echoed by sales and marketing director at Franke UK Jo Sargent who says: “Built-in ceiling hoods are among our best sellers and have consistently grown in sales year-on-year because they offer effective and discreetly-designed extraction that ensures open sight lines across the island unit, giving consumers a more open feel in their kitchen.

In fact, such has been the interest in ceiling models, Novy reports they account for a third of its sales. Country manager of Novy Owain Harrison points out: “While we manufacture all types of cooker hoods and vented hobs, the flush-fitted ceiling hood, represents 30% of our total sales.”

The unobtrusive style of a ceiling extractor provides a kitchen designer with more flexibility, says Jo Sargent of Franke UK: “Built-in ceiling hoods are popular because they harmonise easily into any kitchen design without causing design ‘conflict’.

“At an island unit, consumers often want to make a feature of pendant lighting, often in a row of three for symmetry, and a flush-fitted hood that blends seamlessly into the ceiling void enables these to become the focal point and design priority.”

However, it’s not just the aesthetics that ensures cooker hoods are discreet but also a reduction in noise level for operation. 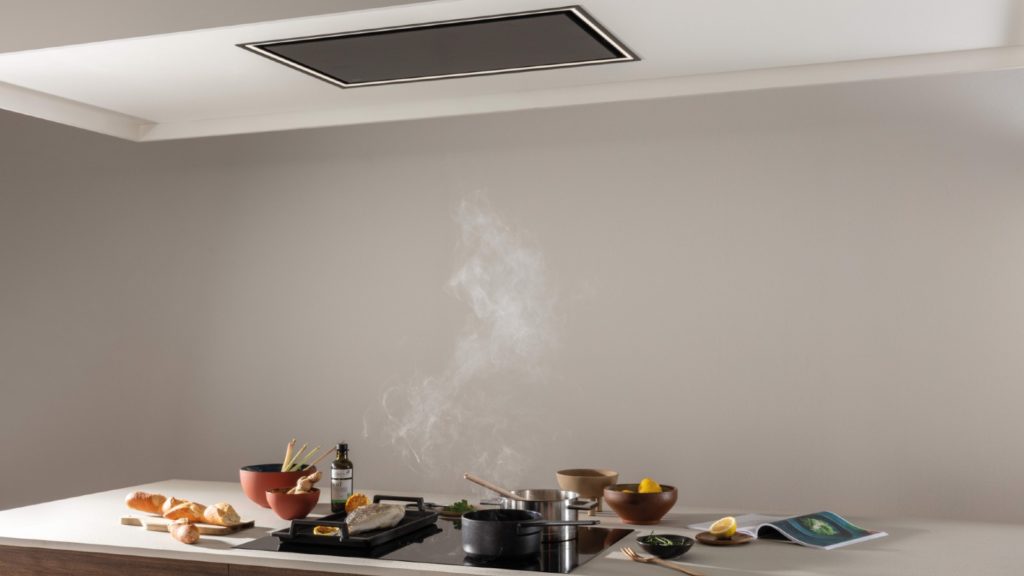 Measuring 900mm wide Novy Pureline Compact PRO comes in stainless steel, black and white. It has three speed setting, plus power boost and has a maximum noise level of 61dB.

Liam Lord of Miro comments: “With modern day, open-plan kitchen living, where the kitchen is the heart of the home and people spend most of their time, the most important features that designers should consider are performance and noise levels that extractors provide.”

Owain Harrison of Novy agrees and comments: “Many of our models have noise levels of less than 38dB at level 1 and 61dB at maximum, similar to the sound of normal conversation.”

And Ron Blount concurs ceiling hoods benefit from a reduction in decibels: “Noise level is key with these hoods so Falmec has just introduced two new ceiling models that include an acoustic baffle which reduces the sound levels by at least 7 decibels.”

However, there has been a drawback with ceiling hoods, and that is the typical British property which doesn’t boast a lot of space in the void.

The Maris Flat ceiling cooker hood from Franke is available in recirculated or ducted options, as 900mm and 1200mm widths. It has three speeds, plus an intensive function and comes in stainless steel, white and black

Jo Sargent adds: “The main considerations when installing a built-in ceiling hood is the depth of the ceiling void above and whether it can house the venting unit, as well as the run of the ducting pipe to the outside – a short and straight run is always the most effective.”

Industry experts also point to the width of the ceiling hood and report it must exceed that of the hob below.

Export manager of Pando Inaki Iturbe states: “They must be 300mm larger than the hob underneath for a standard 2.4m ceiling.”

However, there is more choice in ceiling extraction than before, with a greater variety of ceiling models to suit kitchen projects.

And Franke has recently introduced a slimline ceiling model to suit UK homes, as Jo Sargent explains: “Depending on the age and style of the property, the ceiling void can at times be too narrow to house the venting unit – period properties being a good example.

“Recognising this and the ongoing demand for discreet styles, we’ve developed a broader range of built-in ceiling hood options that give retailers more design flexibility, without compromising on extraction performance.”

She continues: “The Maris Flat ceiling built-in cooker hood, for example, is a new addition to our portfolio and is designed with a slim, overall height of under 200mm, making it perfect for installing into tight ceiling spaces with a smaller void.”

In fact, Inaki Iturbe at Pando says its most popular hood to be used with a kitchen island in the UK is its ceiling models E-295 and E-297.

The company states these models have been adapted for low ceilings and narrow ceiling joists.

And now ceiling and pendant extraction is easy to control too as, similarly to the venting hob, they can be operated by the cooking surface. 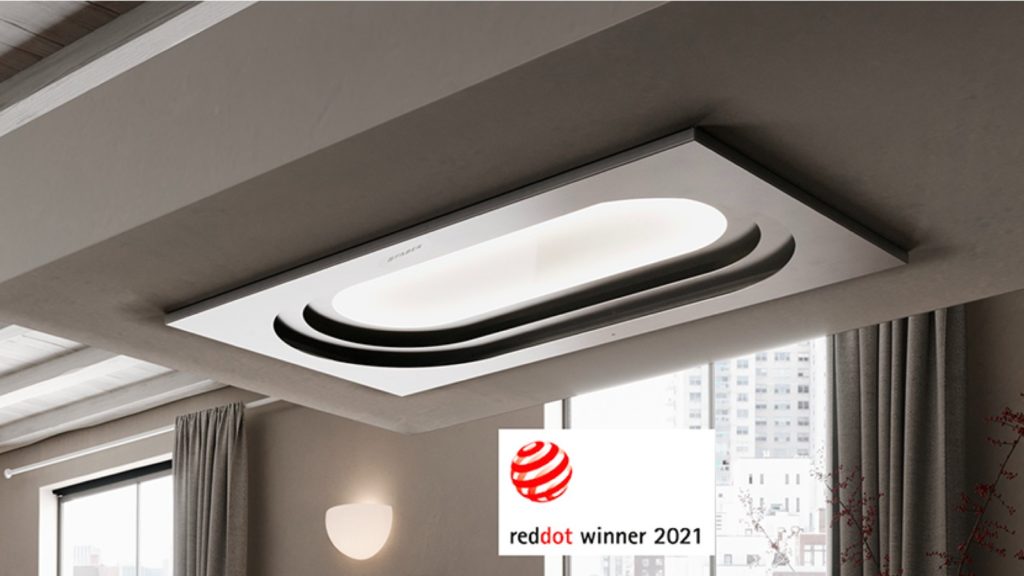 Pantheon from Faber features a tunable light, and layered design, which adds depth to the ceiling and transforms the hood into a décor element. It measures 900m and comes in white matt or stainless steel

Extraction can be powered on and off and power can be adjusted automatically during the cooking process.

In fact, ceiling models in the Bosch and Siemens brands can even be controlled by voice, using Alexa.

So, will the market for pendants and ceiling models ultimately be wiped out by the downdraft? Appliance experts say not.

Product manager for kitchens at Miele GB Max McCormick says: “Downdraft extraction is definitely the emerging trend, however pendant hoods will always have their place in kitchen design.

“Firstly, downdraft extraction will not always be possible due to space or the type of hob being installed and, secondly, from a design point of view, pendant models can offer an interesting design reference point, including an additional lighting option.”

And Owain Harrison of Novy also believes the market for ceiling hoods will remain as he concludes: “As a brand that has a very strong presence in the vented downdraft hob sector, we believe that there will always be a market for ultra-quiet and disceet flush-fitted ceiling hoods due to their excellent performance both in terms of powerful airflow and silence in the kitchen.”