Baths versus showering | Cleaning up

When it comes to the requirement to create a spa-like sanctuary is it really a case of baths versus showering in projects or can both exist in harmony?

Baths and showers could be considered at the opposite end of the spectrum when it comes to the requirement to create a spa-like sanctuary but is it really a case of baths versus showering in projects? 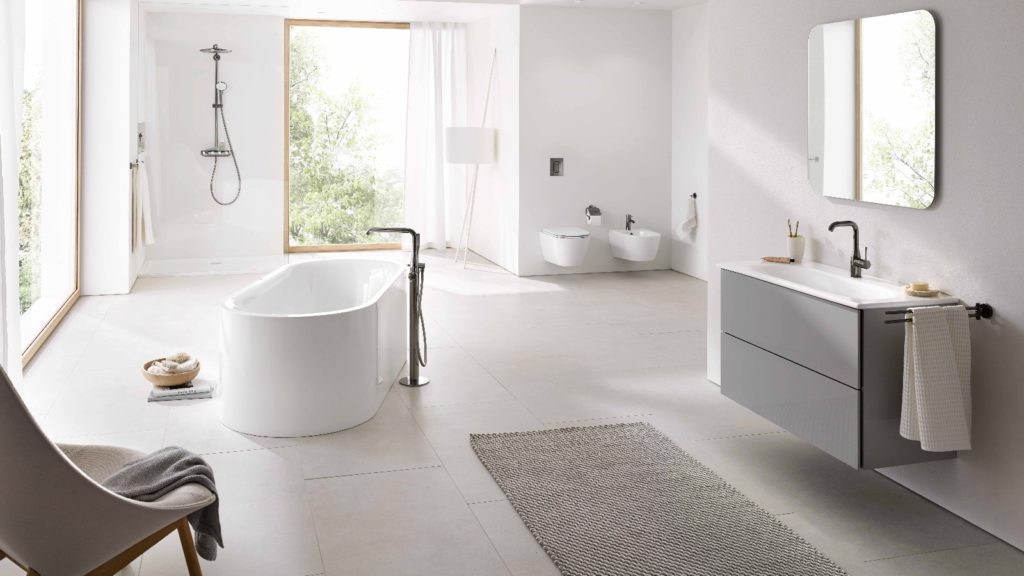 As part of its Essence Ceramic bathroom collection, from Grohe, is the freestanding bath. It boasts an electronic waste kit which senses when the water rises above overflow level and unlocks the drain.

On the surface of it, showering offers speed and convenience and baths an indulgent soak with both vying for space in the confine of a typically small bathrooms.

Managing director of Roman David Osborne states: “As the leading shower enclosure manufacturer, we don’t see ourselves in conflict with baths.

A few years’ ago, there was clearly a trend for replacing baths with large showers, which was we assessed as being mostly due to very little choice of baths at the time. That certainly isn’t the case nowadays.”

In fact, he adds: “In a family bathroom, it is highly likely showers and baths are sold together.”

Of course, showering has its practical benefits with low level access that can suit multi generations, including young and old. 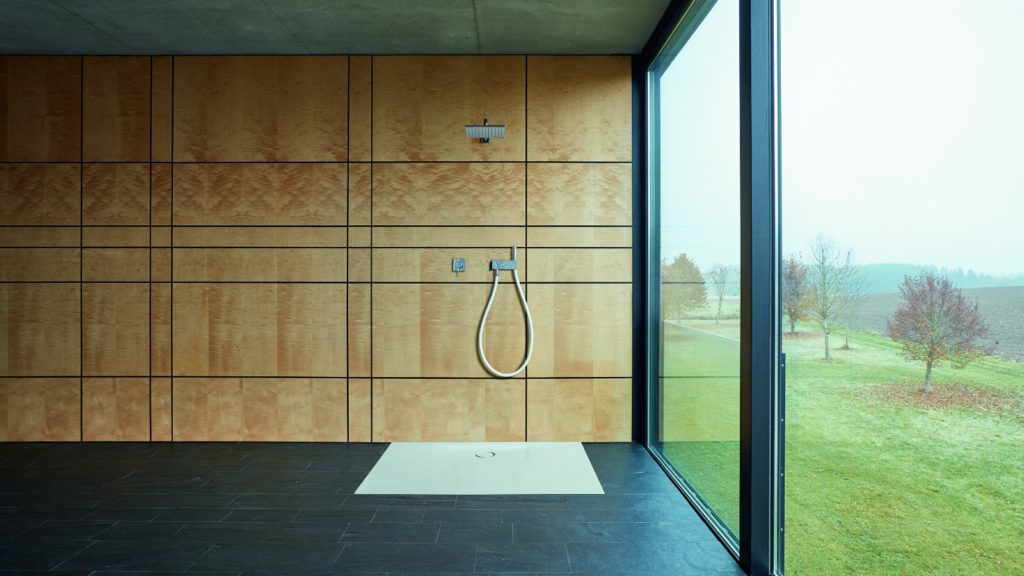 Head of marketing at Bette Sven Rensinghoff points out: “The trend for multi-generational and other alternative households is leading to the selection of products that work well for everyone.

Showers, particularly with stylish and accessible flush to floor shower trays, are popular as they are easy to clean, while also looking stylish.”

And marketing director of Crosswater Juan Pillay agrees, commenting: “Walk-in showers are future-proof. They are ideal for multi-generational bathing spaces, where young children and the elderly can easily access the shower space and be supervised/assisted without restriction if needs be.”

And these spaces feature shower fittings with built-in safety features, such as thermostats, temperature stops and technology which ensures the outer surface remains cool to the touch.

However, the showering market is not clear cut – simply based on practicality alone, as sales and marketing director at RAK Ceramics Ben Bryden explains: “As with everything in the bathroom, the focus in showering is now very much on luxury and wellbeing, as well as practicalities such as water-saving and efficiency. 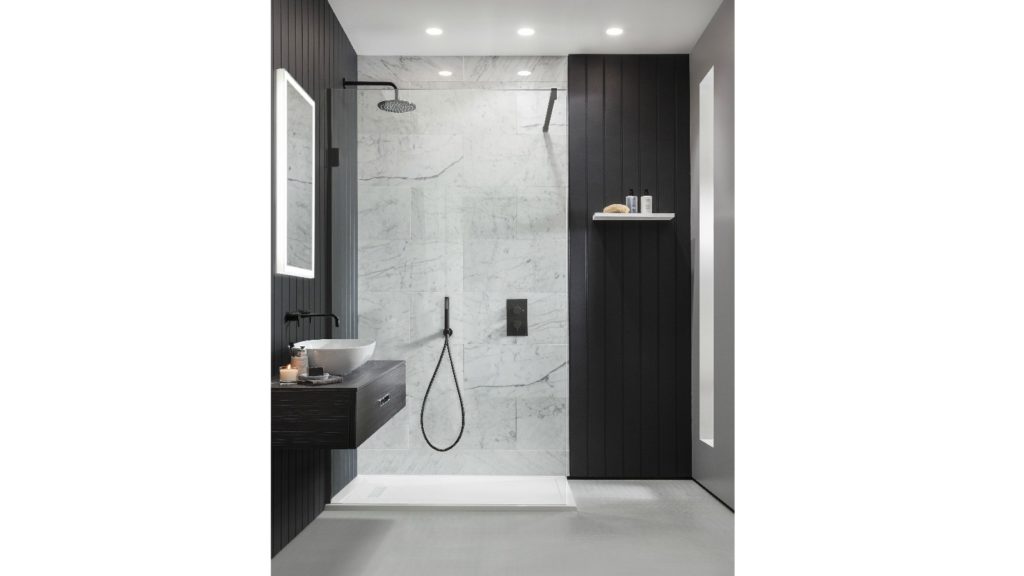 Adding to the MPro brassware range in Matt Black, from Crosswater, is the two outlet, two handle shower bundle. It includes an overhead shower and handset with control and diverter

“There have also been developments in style choices too, with shower brassware becoming much more of a focal point in the bathroom, particularly as consumers move more towards open plan and walk-in environments.”

And, together with the advent of technology, from dual showers to digital controls, showering manufacturers have worked hard on creating experiences for the user.

Senior category manager at Grohe UK Paul Bailey continues: “Brands at the forefront of innovation in technology continue to deliver a shower experience that is increasingly personalised to individual preferences.

“For example Grohe SmartConnect shower systems allow users to adjust the spray settings of their shower via a Bluetooth puck which offers two spray types.”

And marketing manager at Kohler Mira Elisa Paratore agrees there is an increasing demand for smart technology when it comes to showering, adding: “Products such as the Mira Activate digital shower add greater functionality incorporating the latest technology to enable benefits such as user presets and app-enabled remote controls.”

However, the bath remains at the centre point of schemes for consumers who want to  luxuriate in the bathroom. 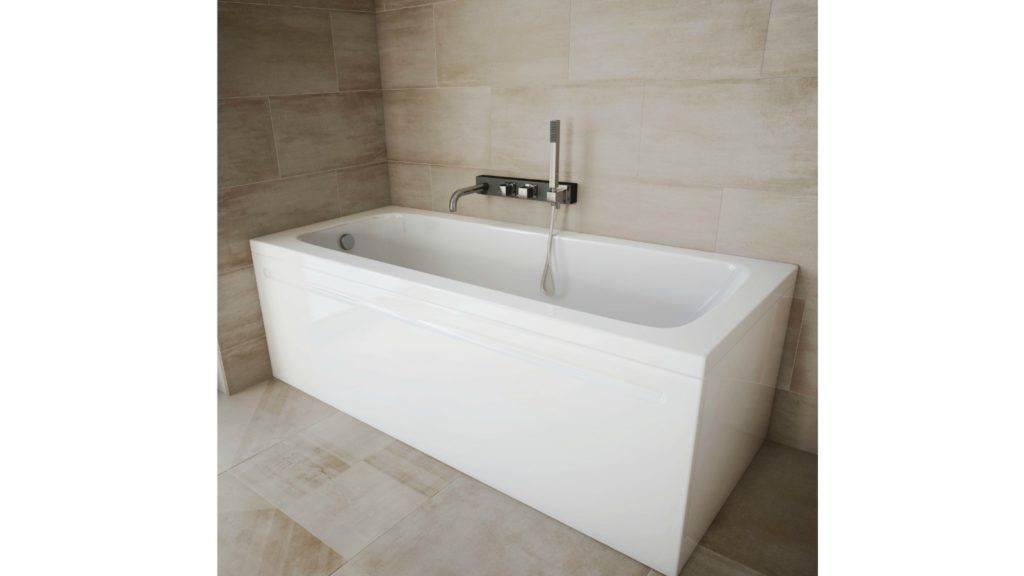 The RAK-Orient bath from Rak Ceramics measures 1750 x 750mm and is double-ended so bathers can sit at a choice of ends. Made from acrylic, its is available in Alpine White.

And it’s reflected in the sales of Clearwater, as marketing manager Faye Froy points out: “We’re seeing an increase in customers looking for luxurious, deep baths for the ultimate in bathroom relaxation and home spa style.”

Marketing manager of BC Designs Sally Cutchie agrees, commenting sales are “strong”: “BC Designs has seen significant growth in the bath market, along with an increase in sales in different finishes and coloured ceramics.”

She further adds: “Bathrooms are now becoming sanctuaries and a place to escape to, but a freestanding bath is often needed for this to happen.

“It is why we have seen a move to people splashing out on freestanding bath tubs.”

Interestingly, however, the bath market seems to have borrowed from the showering market too, with possible multiple installations – similarly to showers which are not restricted to the main bathroom. 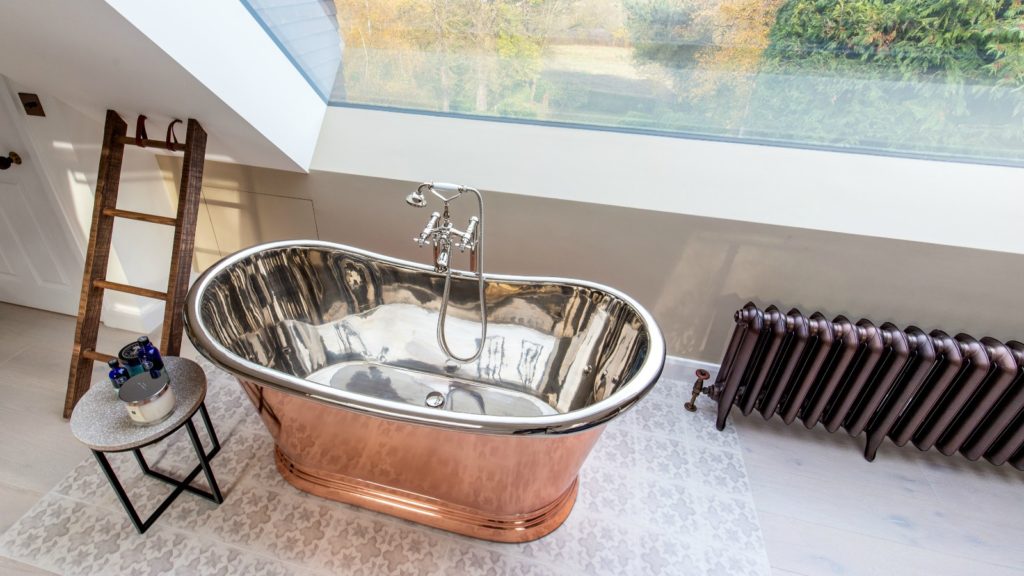 The Copper Nickel boat bath from BC Designs comes in a choice of two sizes and four finish options. It is made in a traditional, handcrafted manner and so features variations in finish.

Sally Cutchie of BC Designs explains: “We have also seen a rise in the trend for the bath to be placed in other rooms in the house, including the master bedroom to create a statement and focal point.”

And technology, arguably driven by the showering market to optimise the washing experience, can now be seen in baths too. Baths have embraced the use of digital technology both in fillers and wastes.

Paul Bailey of Grohe continues: “One example of this is models that are designed without an overflow and instead offer an electronic waste set system.

“Aside from the enhanced minimalist and elegant design a bath without overflow provides, it also cleverly uses pressure sensors to detect the weight of the water.

“This allows models equipped with these sensors to sense when the water rises above overflow level and signal to the electronic control to unlock the drain to prevent water waste, flooding and damage to the home.”

So are shower and bath sales essentially disparate, with one method of bathing eventually losing out to the other? 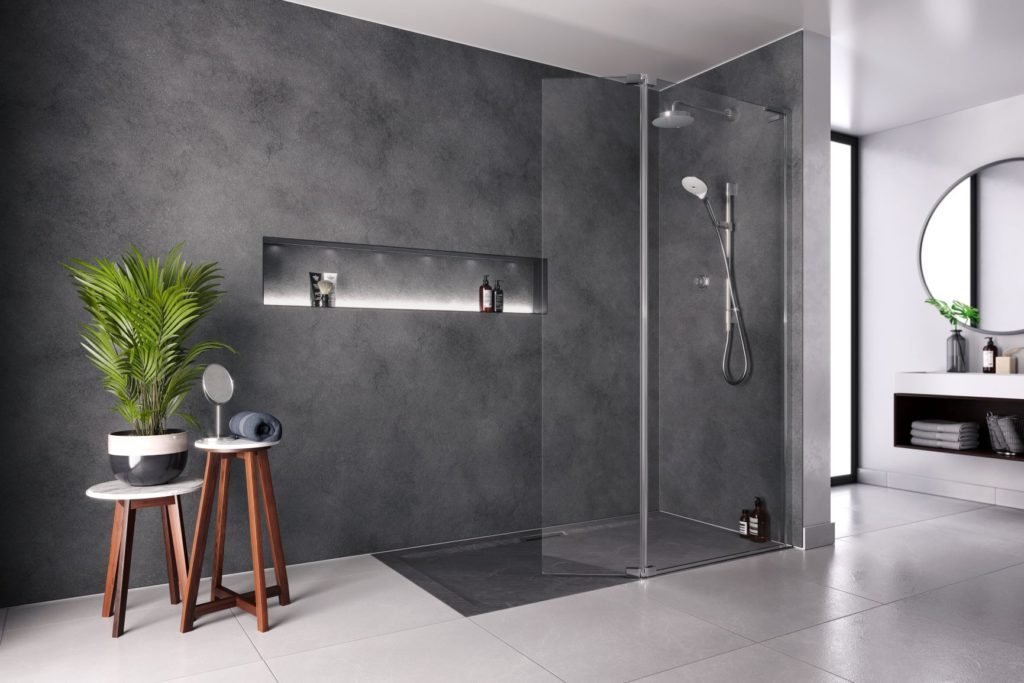 Combined with a low level shower tray, the Mira Ascend enclosure is offered in a choice of 7 options from pivot and sliding door to quadrant and walk-in. It has a semi-framed design and comes with CleanCoat technology.

Well, there could be perceived to be more sales opportunities for showers for additional bathroom facilities.

However, shopper journey research conducted by Mira Showers in 2019 revealed the majority (55%) of shower purchases were for a full bathroom refit, with only 2% of showers being brought for an extra facility.

Although the showering brand did point out 26% of consumers surveyed said the shower was the most important item in the bathroom, compared with 19% who preferred the bath.

Equally, it could be argued showers are more useful as they are used more frequently.

David Osborne of Roman states: “Clearly with time pressures, gyms and exercise regimes, showers are always going to be used more than a bath, but that doesn’t mean people don’t enjoy having a nice soak in the bath.”

And Sally Cutchie explains the bath actually has greater functionality, explaining: “A bath can function as a bath, but you can also have a shower over the bath so you effectively have two products in one.” 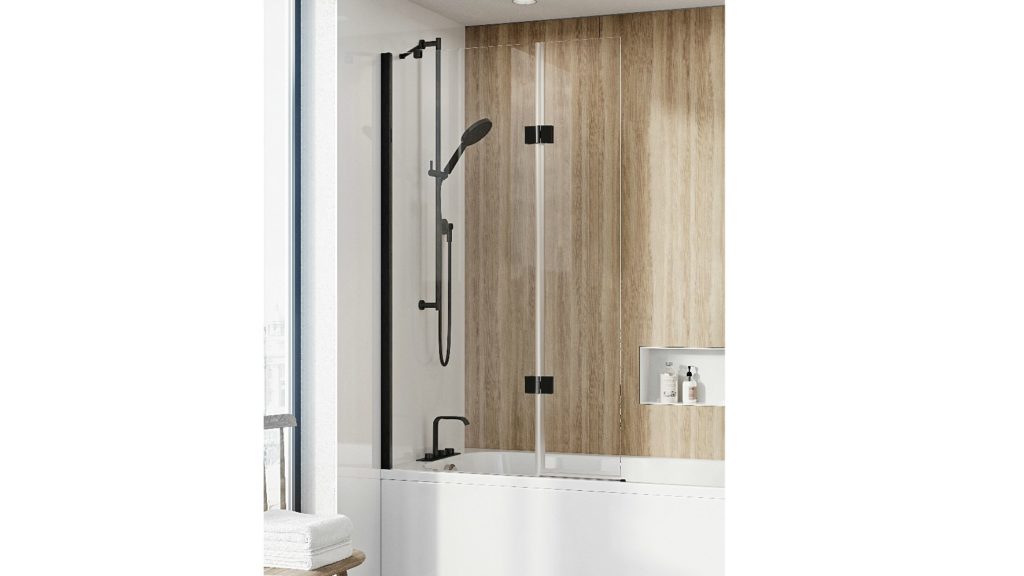 Part of the Lumin8 range, from Roman, is the Pivoting Black Screen with a Matt Black frame which, as the name suggests is made from 8mm glass. It measures 150mm high and can be fitted left or right-handed

In fact, it seems shower and bath sales can continue in harmony, as Paul Bailey of Grohe concludes: “Baths have long been and will continue to be a bathroom staple.

“While showers are definitely a popular choice for modern bathroom spaces, it is fair to say that they will never truly be able to provide the benefits unique to a traditional tub – and vice versa.

“Showers may certainly continue to rise in popularity, but we do not predict that the bath will become obsolete any time soon.”