We take a look at how slimmer models, solid surface and a palette of colours is influencing shower tray sales

We take a look at how slimmer models, solid surface and a palette of colours is influencing the design and sales of shower trays

It wasn’t so long ago, a 40mm tray was considered the slim and refined choice for showering spaces, but it has since been joined by models with reduced heights. 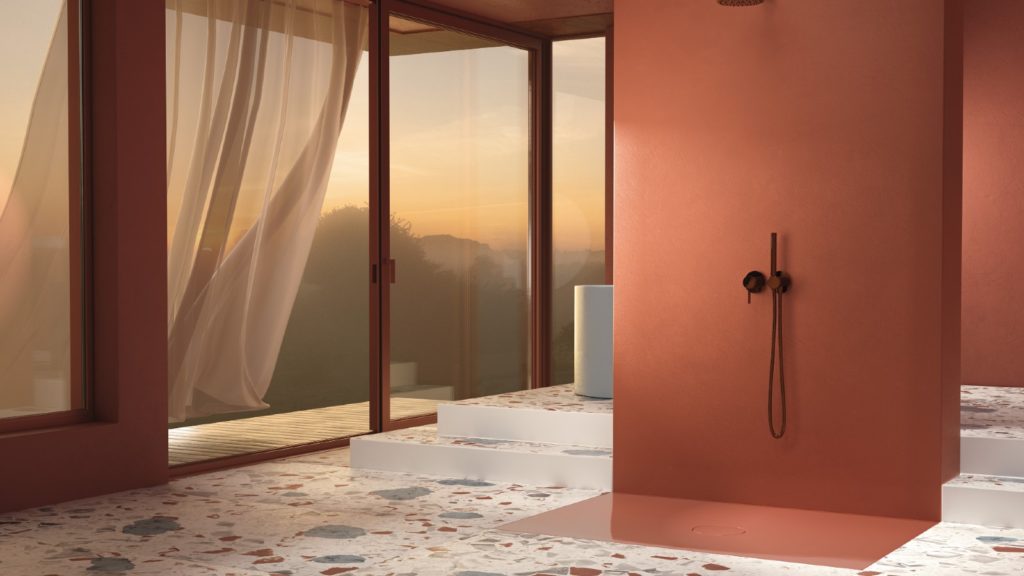 Measuring 10mm thick, BetteAir from Bette is made from enamelled titanium steel,  boasts an enlarged 200mm waste and comes in a choice of 32 colours and eight sizes.

So, is the 40mm model now in danger of becoming the commodity tray it succeeded? Managing director of Matki Nicholas Cunild says not, as he points out: “The 40mm white shower tray is definitely one of the most popular shower trays on the market, but we wouldn’t regard it is a commodity as within the broad classification there is significant variance in manufacture.

“This could be based around the design, or materials used manufacturing process and the rigour of quality standard, all of which have implications on the look, feel and longevity of the product.” 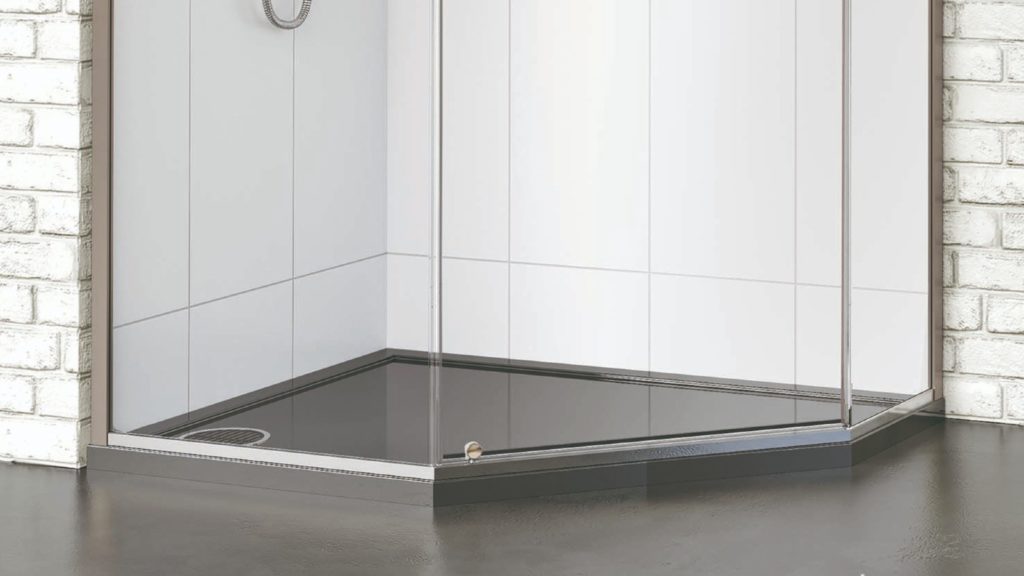 Manufactured from cast stone resin, the 40mm Quintesse Shower Tray from Matki is available in any colour to match RAL or Pantone and comes with a 10-year guarantee.

However, product manager of Acquabella Fernando Maceda believes the market is moving towards slimmer trays.

He exclaims: “Now shower trays are becoming slimmer, we consider 40mm too thick. Slim shower trays which range from 25 to 30mm thick we believe is the optimum level.” 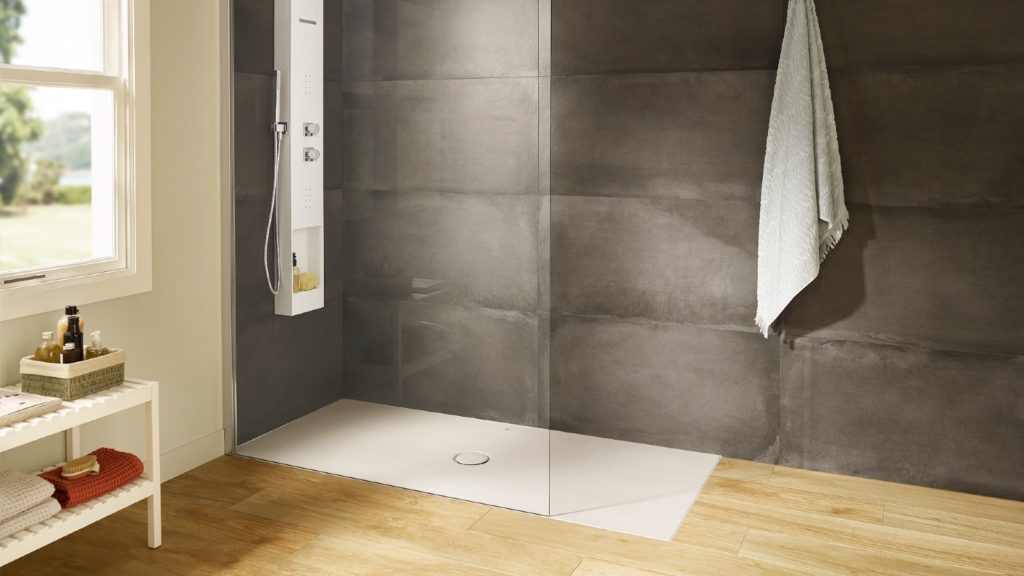 Indeed, the popularity of slim shower trays is reflected in the sales figures of Bette UK, as its country manager Samantha Lewis reports: “Over the years there has been a continual reduction in the height of shower trays with those around 40mm or less the most popular at the moment.

“The market is moving towards flatter and flush-to-floor options and the majority of Bette’s shower tray sales are of 25mm and 35mm options.”

Product and marketing manager of Ambiance Bain Karen Jervis says she also noticed the move towards slimmer shower trays in her company’s sales: “At Ambiance Bain we offer a choice of shower trays from 20mm, 30mm, 33mm or 40mm thickness, and our best-selling trays are Atima and Altimax which are 30mm thick, which supports our research findings that as long as the shower tray is robust, then consumers prefer the aesthetic look of a low-level shower tray.”

Such has been the move towards ever slimmer shower trays, Bette recently introduced a flush-to-floor shower surface BetteAir, which the company calls a shower tile rather than tray.

Samantha Lewis explains why: “It’s thickness is roughly the same as a large format tile and it can be installed flush with the floor, providing all the advantages of a tile, without the disadvantages.” 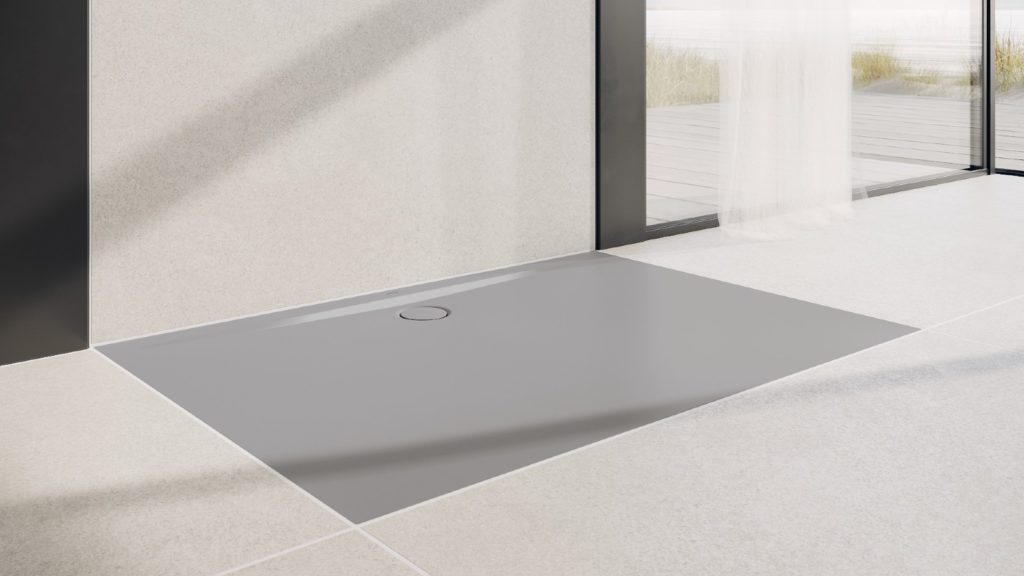 Superplan Zero, from Kaldewei, is a floor level shower surface which can be accessed from three sides and a waste positioned close to the wall.

Head of sales at Kaldewei UK Adam Teal explains the benefits: “A zero level shower surface creates a seamless transition from shower tray to the floor.

“This has numerous advantages such as making the bathroom appear larger.

“It is also an extremely suitable option for multigenerational families, especially when combined with Kaldewei’s Secure Plus anti-slip finish.”

In fact, anti-slip is one of the latest developments which is resonating with consumers. 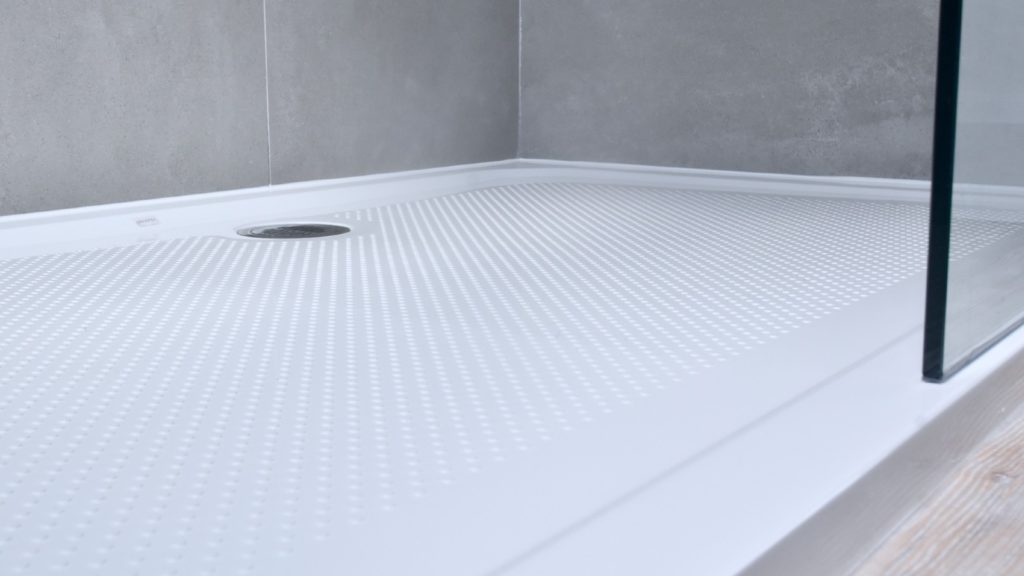 Boasting a patented anti-slip design, Senstec comes in white as standard, or any colour at no additional cost and is manufactured by Classic Marble.

“Texture and anti-slip, which is particularly important for an ageing population, has grown with the increase in multi-generational living”, says sales and marketing director at Kudos Nick Graville.

He continues: “The technology on anti-slip is also improving, instead of the original painted on solution, the anti-slip component is now usually an integral part of the tray material.”

In fact, a shower tray with integral anti-slip properties was the reason behind the development of Classic Marble’s Senstec collection.

Working with an aerospace engineer, the company created a patented model, which was tested by UKAS laboratory and independently recognised to have anti-slip properties.

But how does the trend for increasingly flat surfaces correlate with the requirements for anti-slip? 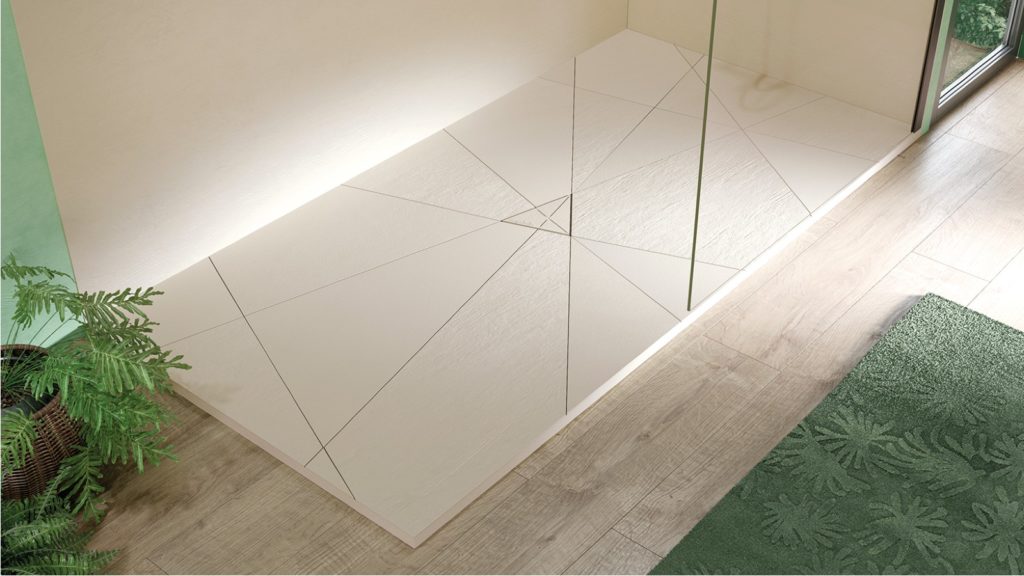 Acquabella offers the Smart Quiz shower tray which features three finishes – Beton, Zero and Ethnic – in one product. It has a central drain integrated into the shapes of the shower tray.

Karen Jervis of Ambiance Bain comments: “Anti-slip properties have always been something of a misunderstood science.

“People think that the rougher the surface, the more slip resistant it is, however, the opposite is usually the case, because with a flatter tray, then more surface area of your foot sits on the tray, giving more grip.”

Bette also points to its BetteAnti-Slip Sense with group C to DIN 51097 which features micro particles and provides a friction effect activated on contact with water.

The company states when dry, users won’t notice any difference in the look or feel of the bath or shower to a standard shower tray. 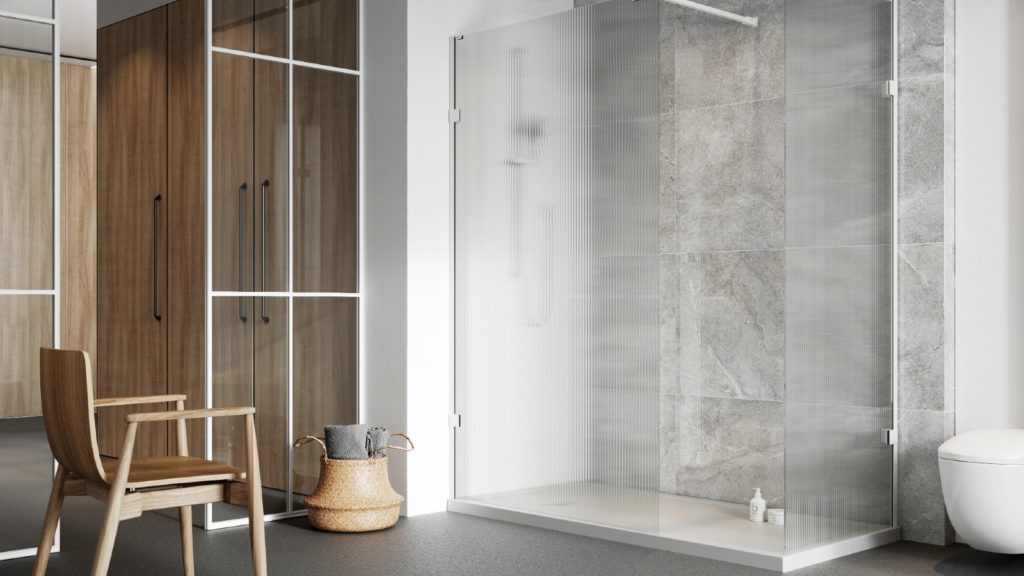 Although available on acrylic and enamelled steel trays, Roman believes it will be solid surface trays leading the added value market with their anti-slip properties.

“Anti-slip trays are significantly gaining traction and the natural grip texture of the matt finish quickly justifies the premium for what is a key product in bathroom design.” 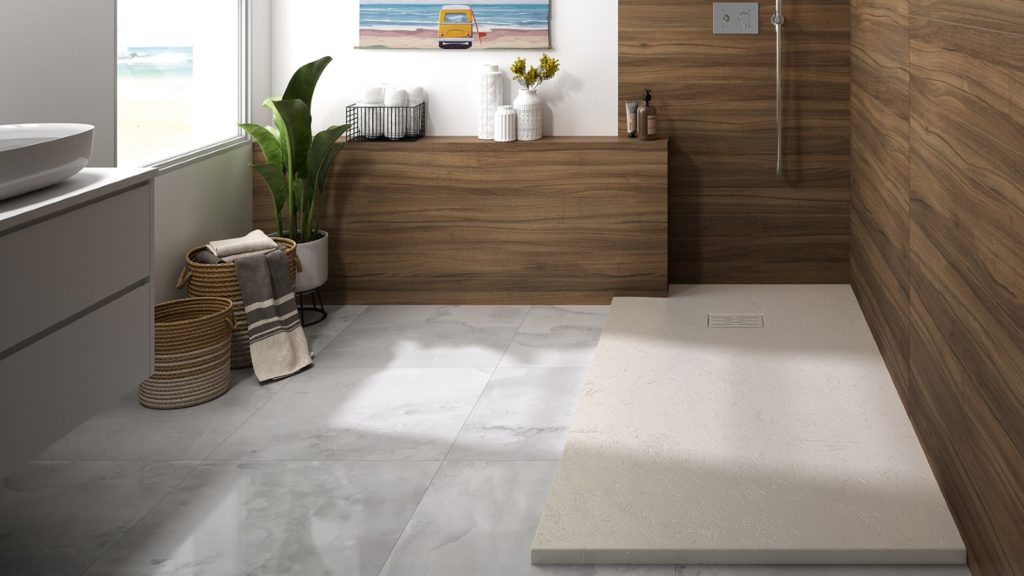 Kinerock Evo by Kinedo is a stone resin tray which comes in 38 sizes, across square, rectangle and quadrant styles, and comes in five colours.

“They offer a solid structure, are warm to the touch and are available in a huge range of finishes.”

She highlights the popularity of its Kinerock Evo range from Kinedo stating it can emulate natural stone, even providing the texture, and can also be cut-on-site to be shaped around obstacles.

Product and marketing manager of Ambiance Bain Karen Jervis states:“Solid surface shower trays are the way forward, allowing a choice of colours along with the flexibility of being able to cut to exact dimensions.”

In fact, David Osborne of Roman believes there will be a shift towards solid surface shower tray sales, as he explains: “We explain the shower tray market to evolve significantly in terms of material selection as bathroom designs, such as hotels, prioritise sustainable design and credentials.

“Some other tray materials have landfill as their only disposal option at the end of life – solid surface is clearly the market for the future.”

Whatever the choice of material, now or in the future, colour can also play a role in shower tray specification. 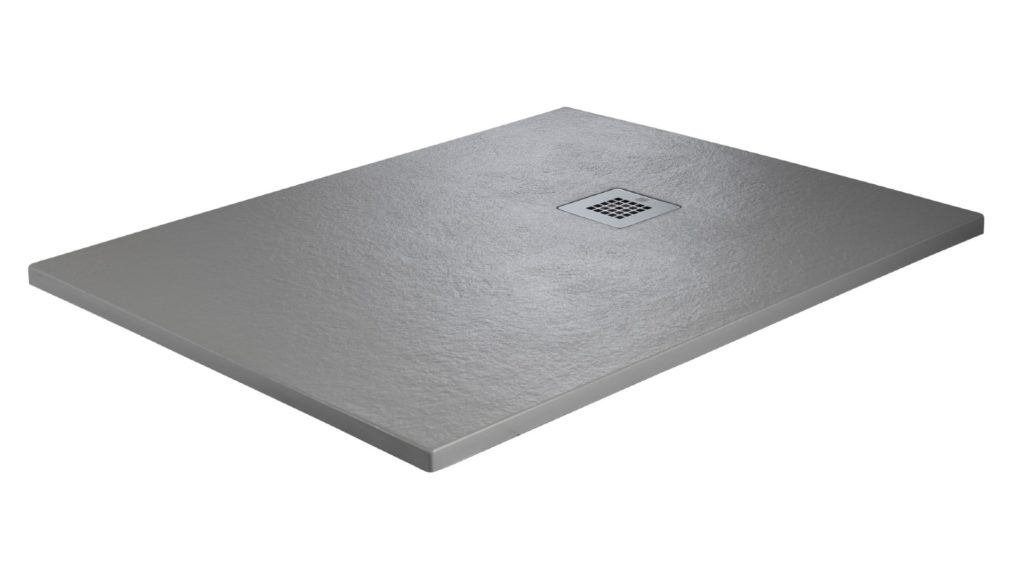 Manufacturers have introduced a wide array of colours and co-ordinating or contrasting wastes to enable designers to individualise showering spaces.

At ISH 2019, Kaldewei introduced its Nexsys shower surface in 17 decors and five waste finishes, three surface finishes and in 20 sizes.

It offeres bathroom designers a choice of up to 5,000 possible combinations.

Despite this, Nick Graville of Kudos comments: “Colours haven’t gone crazy, white is still the biggest seller by far, but we are seeing market increases in slate and dark grey.” 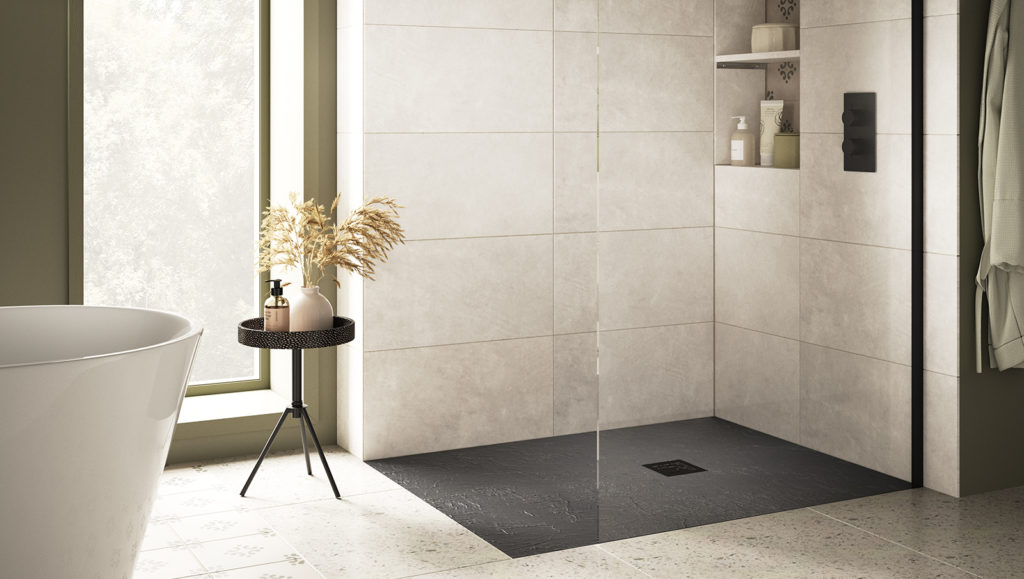 With a depth of 35mm, Trojan Baths offers Slate effect shower trays in range of shapes and choice of four colours.

It could also be considered a missed opportunity, as Samantha Lewis points out colour could play a larger role in designing shower tray sales, adding: “Colour can often be overlooked. Choosing a shower tray in a colour that co-ordinates with the flooring can make a huge difference to how the bathroom looks, but may designers opt for a white shower tray.

“There are hundreds of different colours available and matt as well as gloss finishes.”

Karen Jervis of Ambiance Bain said designers are also missing a trick by not considering co-ordinating the shower tray to the worktop or wall panels.

“Being able to contrast or co-ordinate with other worktops and basins to complete the look is a key consideration for consumers.

“Ambiance Bain have matching SMO integrated washbasin and worktops which match the exact colour of the shower tray and the wall panels.”

Certainly, there are a wide array of options for bathroom designers to encourage their client to trade up and for the shower tray to take its rightful place as a premium shower specification.

From slim profiles in a broad palette of colour and the practicalities of anti-slip, the market looks healthy to provide consumers with an added value shower floor for consumers who want the wetroom look but without any potential risk of leaks.