Reducing the impact on the environment but adding practicalities of installation and anti-slip, is this the sales formula for shower trays?

Reducing the impact on the environment but adding practicalities of installation and anti-slip, could this be the successful sales formula for shower trays?

With form now reduced to the bare minimum, with the likes of BetteAir shower tile and Kaldewei SuperPlan Zero surface, where does it leave shower tray design? And has the ‘less is more’ mantra infiltrated more than just the aesthetics? 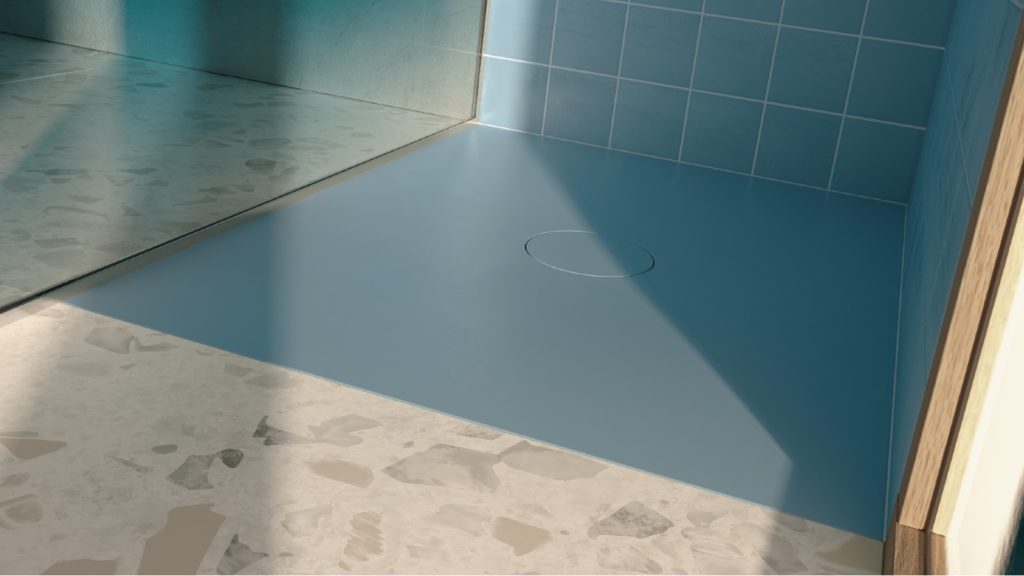 Certainly, that seems to be the case, as JT has recently reduced the weight of its stone resin shower trays by 25% and CCL Building Products has reduced water use with its waterless trap on its Garla tray.

Both trays have benefits for the environment. According to CCL Building Products, the 50mm Lo-Seal Trap has a return mechanism that doesn’t require water and, since it will never dry out, will prevent odours from entering a building. So, it will enhance the atmosphere of an indoor environment. 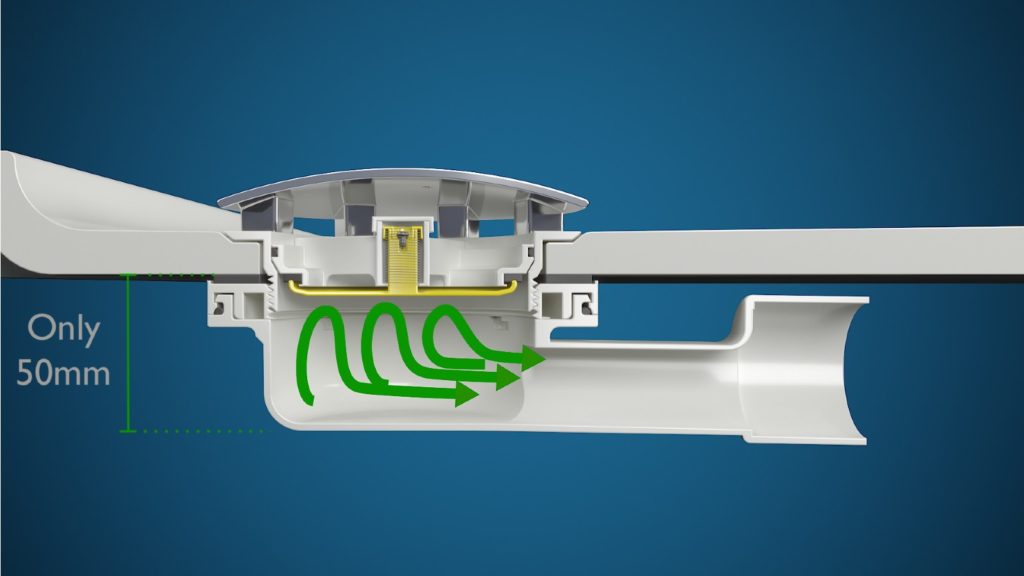 Featured on the CCL Building Products Garla shower tray, the Lo-Seal waterless trap is only opened when in use, preventing odours from pipework entering the bathroom.

Whereas the reduction of weight of JT’s resin stone trays makes them easier to transport, reduces the shower tray’s carbon footprint, and therefore impact on the planet, as well as trade professionals.

It could even be argued the focus on the environment could see the reduction of some materials in shower tray manufacturing, such as acrylic which can end up in landfill rather than being recycled.

David Osborne of Roman states: “Solid surface is clearly the material for the future due to its ease of recycling and re-use at its original value, which is firmly at the core of the circular economy.”

While Kaldewei has introduced Bluemint Steel, which it states is steel with a low CO2 intensity.

However, Ann Boardman, head of marketing and product development at Saniflo, points out: “Green acrylic has recently hit the market, sold as a more environmentally friendly plastic than other acrylics.

“This could be either acrylic recycled at the end of its consumer life or scrap acrylic captured from the production line.”

Certainly its likely shower trays which have less impact on the environemnt will be more successful in sales, as head of marketing at Bette UK Sven Resinghoff points out: “There seems to be a desire to buy better and to buy in a more considered way. How a product is made and used, and the resources used to make it are an important part of that story.”

But that’s where the story of ‘less is more’ ends, as bigger is better for shower trays, in terms of sizes and choice of colours. 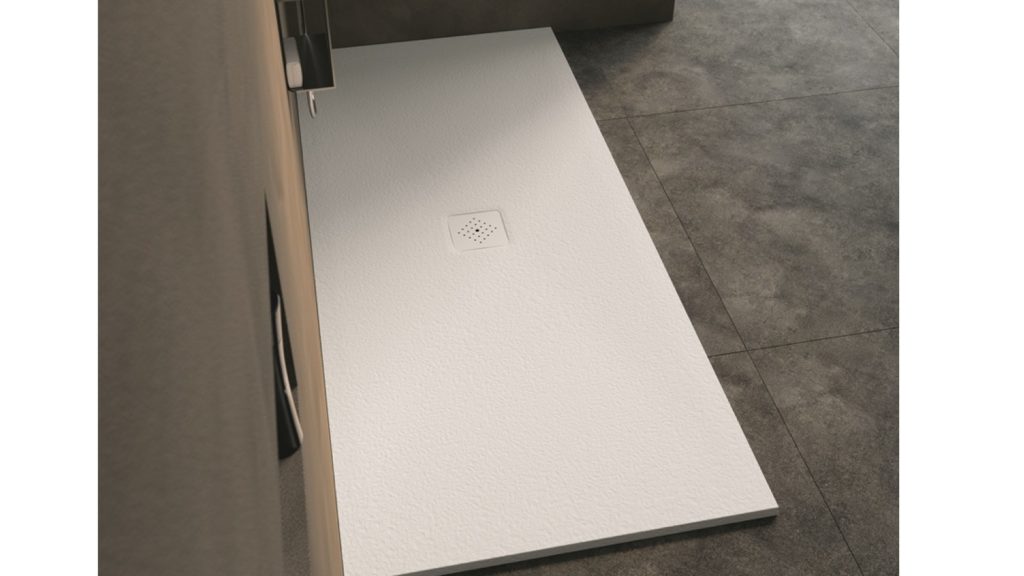 Kinemoon from Kinedo is a stone-effect tray which measures 26mm deep, comes with a choice of three wastes and measures up to 1800mm

Head of sales at Kaldewei Adam Teal says this is reflected in his company’s sales: “There has been a marked increase in the sales of larger shower trays, such as Cayonoplan or new Superplan Zero. Other options such as the Nexsys shower surface are increasing in popularity this is due to the waste channel which can be colour matched or have a contrasting finish.”

Manufacturers are also looking at the bigger picture of practicalities with made to measure, through to optional anti-slip. 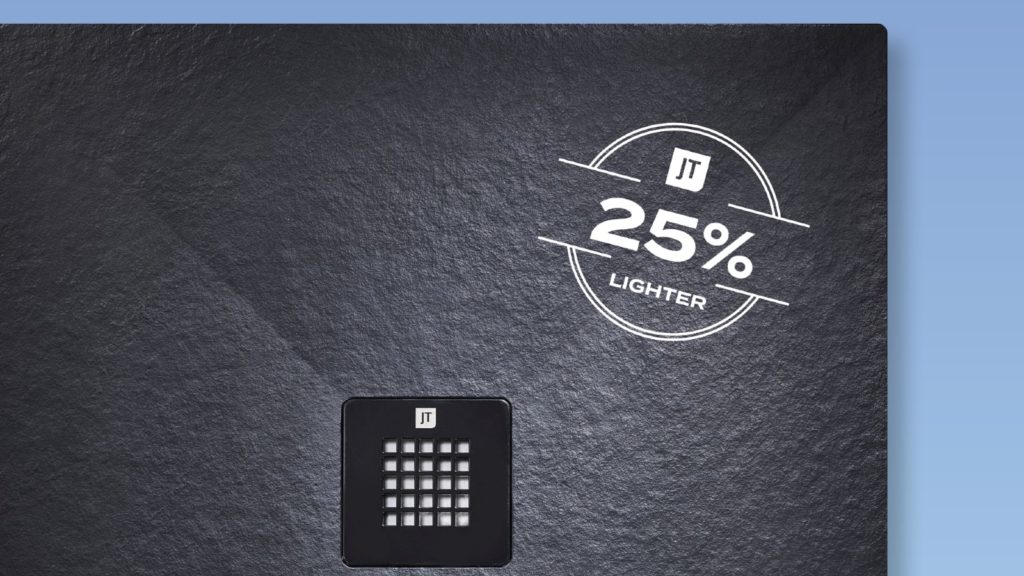 JT has committed to making all its stone resin shower trays 25% lighter in weight, which come from a new blend of natural fillers, promising less stress on both the environment and fitters

“Designers should appraise themselves of the current range of trays that can be cut on site if there is an unusual space that requires a tray or there is an obstacle to cut round,” explains Ann Boardman.

And sales and marketing director of RAK Ceramics Ben Bryden agrees there will be a need for designers to embrace the practicailites of made to measure trays as well as anti-slip, which is gaining traction: “Made-to-measure trays are likely to take on greater significance, as homeowners continue to carve out some bathroom space from their existing square metres and shower areas are formed from awkward corners etc.

It’s likely we will see more in the way of textured surfaces coming through too, incorporating anti-slip in a style-led way.”

He concludes: “Designers taking time to understand the advantages of such features, particularly as well as in terms of style and visual appeal will be able to encourage consumers to trade up confidently.”