In part two of our review at ISH, we take a look at some of the product launches set to influence UK consumers

In part two of our review at ISH, we take a look at some of the product launches set to turn heads and influence the UK consumer for the next two years 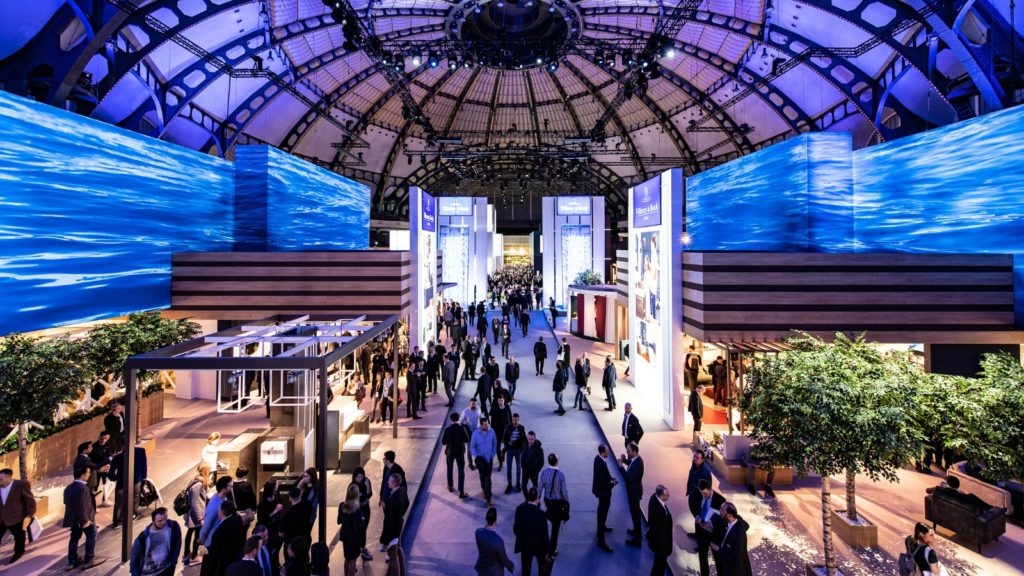 With nearly 200,000 visitors attending the biennial ISH in Frankfurt, it can quite rightly lay claim to be among the world’s best bathroom show.

Also featuring heating, ventilation and air-conditioning companies, ISH covered a total of 275,000sqm, which is the equivalent of 39 football pitches.

And during the five-day duration of the exhibition, attendees could see the latest products from 2,532 exhibitors from 57 countries, all of which will influence global home interiors over the next two years.

Such is the reach of the exhibition; nearly half of all visitors (48%) were from outside its native Germany.

And the UK was cited as being among the largest represented visiting nations.

So it is no surprise, President and CEO of organiser Messe Frankfurt Wolfgang Marzin commented: “ISH has once again demonstrated that it connects all international players from the sector.”

And in fact, exhibitor Jaquar said it was its best show to date. Darren Chisholm, Jaquar national sales manager (UK, Ireland, Benelux)  said:“This wasn’t Jaquar’s first time exhibiting at ISH but it was certainly our most successful.

“The volume of interest was unprecedented. We left Frankfurt with lots of new contacts and leads, many of which were from retailers not previously on our radar.”

This year not only saw collaborations between bathroom manufacturers and architects but a strong story was the riotous return of colour in earthy tones, pastels, candy colours and dark, luxurious tones.

Here we will offer our final assortment from the show, which will attract minds and wallets of the buying public. 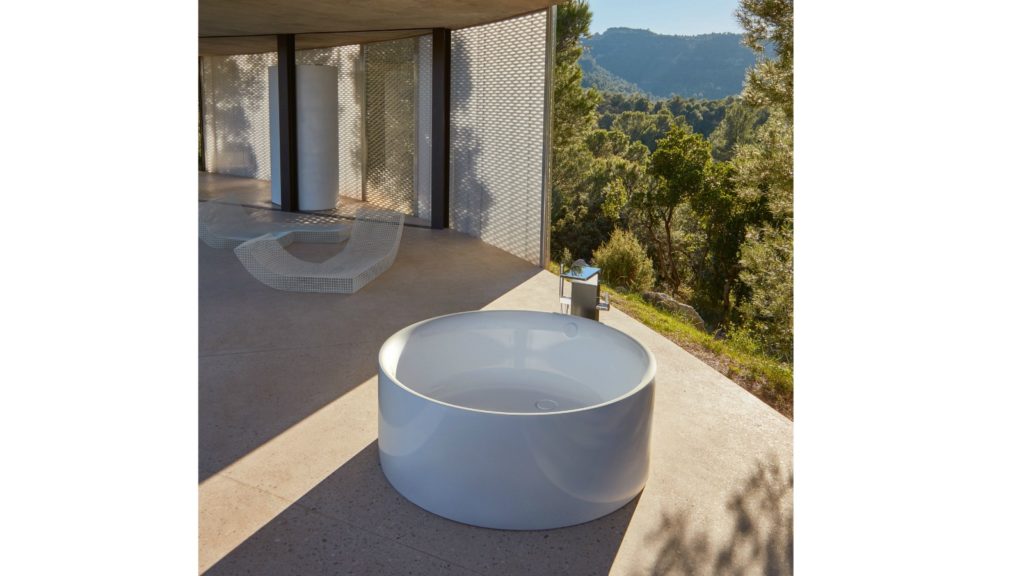 The design stories on the Bette stand focused upon BetteCraft basins in a range of colours and a circular bath, BettePond, all manufactured from enamelled titanium steel.

These were joined by BetteSpace, a range of three trapezoid models to make use of space in small and medium-sized bathrooms. 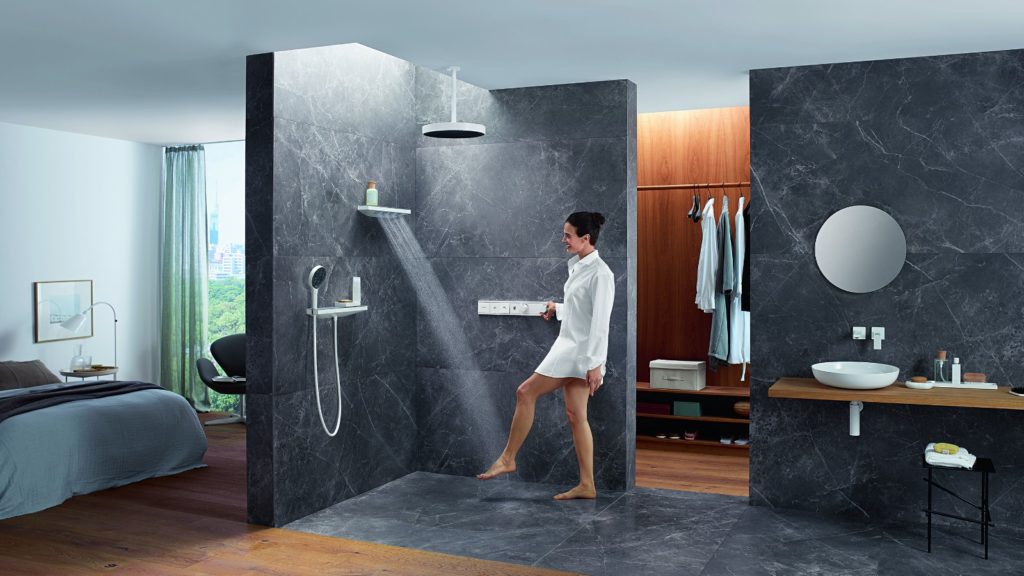 Star of the show on the Hansgrohe stand was the RainInfinity shower system, which features a concave spay surface, so it doesn’t require a wall arm.

It comes in a choice of wall and ceiling mounted overhead, with the choice of a single or three-mode handshower, a Showerpipe with head, hand shower and shower bar, with concealed control.

In addition, the range includes the Shoulder Shower with integrated shelf. 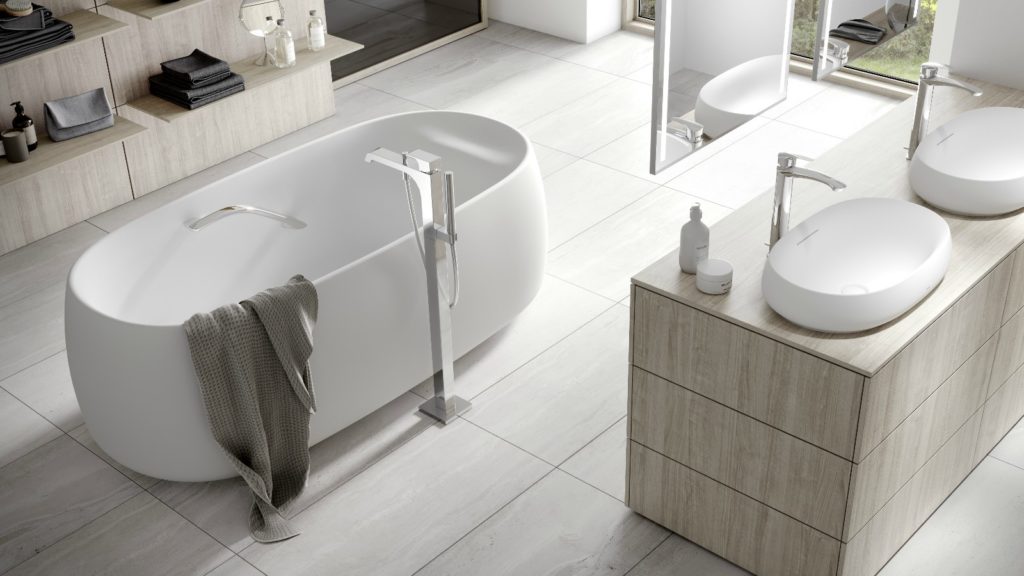 On a stand highlighting bathrooms for defined consumer segments, the story of the stand for Toto was floating bathtubs, designed for relaxation and regeneration.

The tubs are designed following ergonomic studies, to ensure the bath inner puts the bather’s body into the “ideal position” for relaxation.

Available in rounded or angular versions, rhe floating bathtubs feature a headrest and a footrest, which can also be used as a seat, and hand grips. 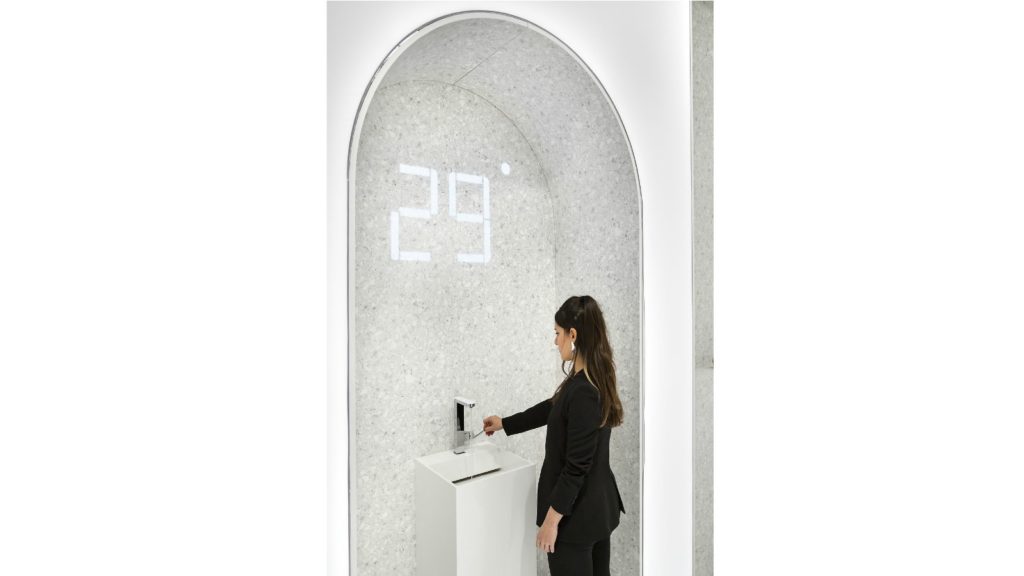 Once again taking residency in the Forum, Grohe introduced 500 products across bathroom ceramics, brassware and framing systems for smart toilets.

It extended its line of sanitaryware, introduced baths, 3D printed metal taps, and Grohe Colour taps and accessories in a choice of 10 finishes.

However a talking point of the stand the digital tap Grohe Plus, with LED temperature readout and sensor control for a water-saving flow 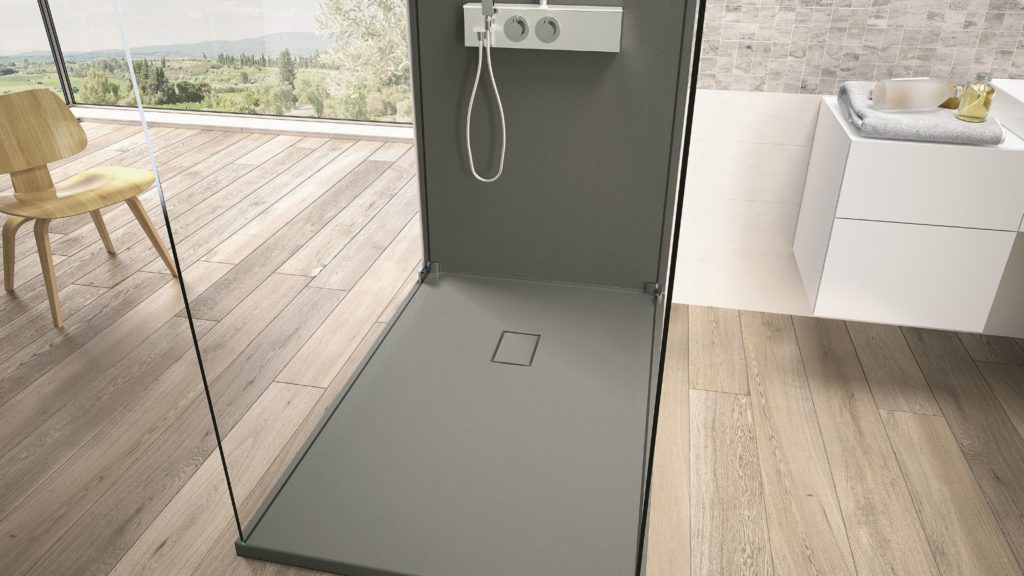 Designed to look like slate and available in six colours, Kinestone has been launched for the top-end of the market, while Kinesurf Pietra with a mineral textured surface and Kinesurf+, featuring a fine textured surface, are for the mid market.

Serving the contract market is Kinelisse, white slim tray which, like all the models, can be installed in raised, recessed or flat installations. 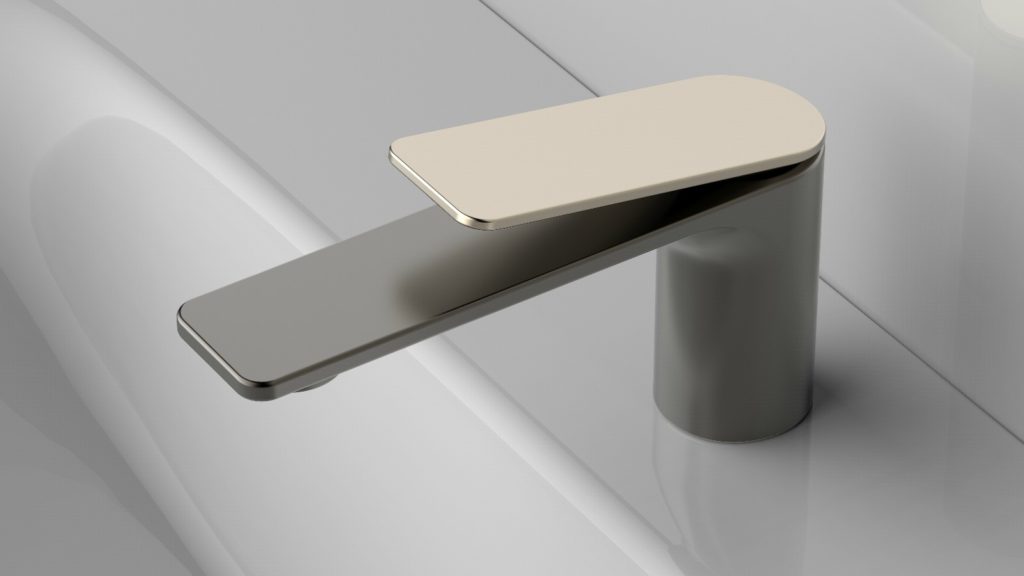 Designed in collaboration with Matteo Thun and Antonio Rodriguez, Laguna comes in a choice of matt and high shine finishes, as well as a two-tone décor.

The company had also signed the contract for a flagship showroom in Leeds, Jaquar World, which is due to open in September, with a second planned for Dublin. 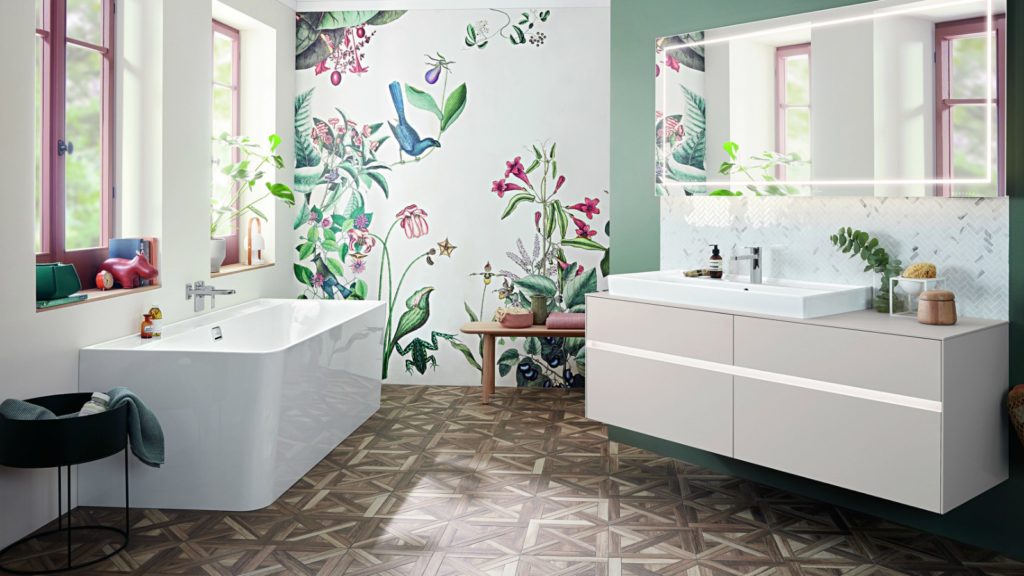 Alongside a colourful “His and Hers” bathroom concept, designed by Gesa Hansen, Villeroy & Boch introduced an updated version of Memento, Memento 2.0.

It added to its premium Finion collection and extended its brassware offer with Liberty and finishes for its Dawn range.

However a star of the show was the Collaro collection which is based upon fine-lined washbasins, with corresponding furniture, and brings TitamCeram to the mainstream market. 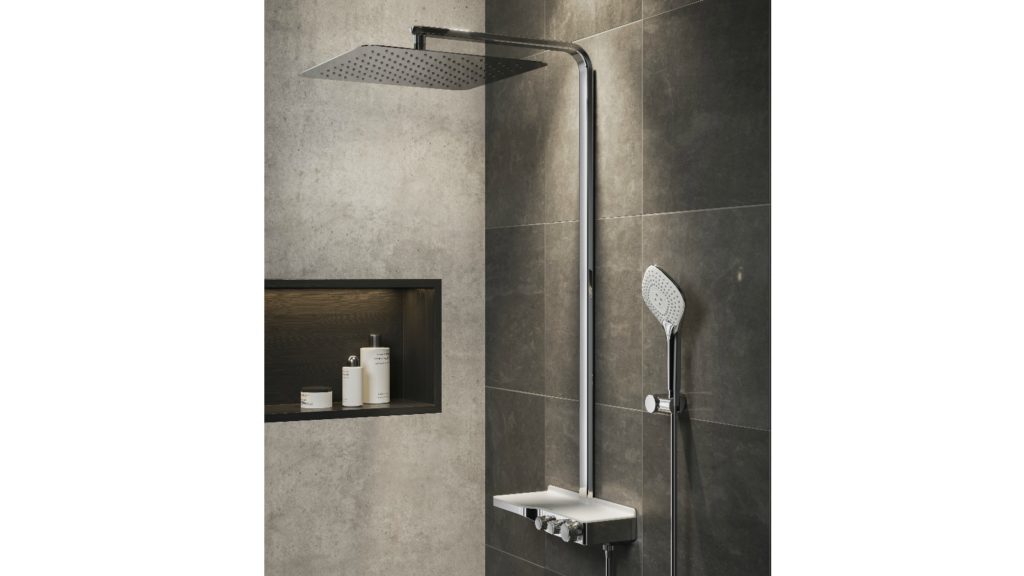 At the heart of the Ideal Standard stand was its first collaboration with Palomba Serafini Associati and the re-imaging of the Conca suite, together with colourful Ipalyss basins.

However, not to be outshone, was its showering range with upgraded thermostats, slimmer exposed valves and shelf thermostats in solid surface.

Push button controls, Navigo, has been incorporated into the Ceratherm 300mm shelf model, as well as the Easybox Navigo. 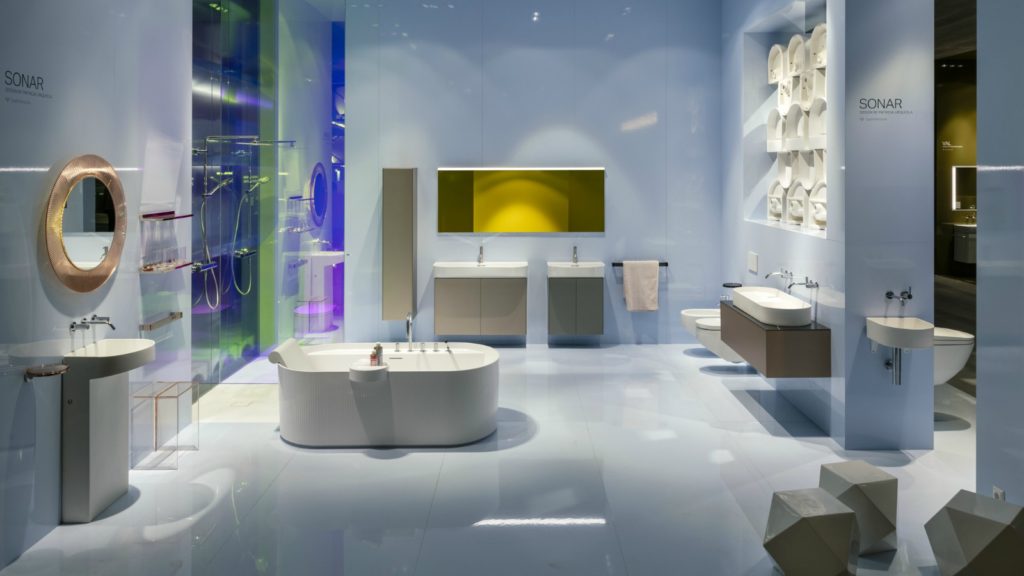 It built on its shower toilets, offering its latest Cleanet Navia to a broad market, with side-mounted control augmented by an App control.

It also introduced the pioneering Save! WC which separates waste at source to reduce excessive nitrogen entering the ecosystem.

Read about the designer collaborations at ISH in Part One of our show report.