The rate of pace in sales may have slowed, but induction hobs remain a firm favourite

Although the rate of pace in sales may have slowed, induction hobs remain a firm favourite, having overtaken gas hobs at the top of the market. But induction is now hot on the heels of the sector as a whole.

Despite establishing its position in the marketplace, with around a third of all hob sales now induction, 2018 has not seen the same levels of growth as in previous years. 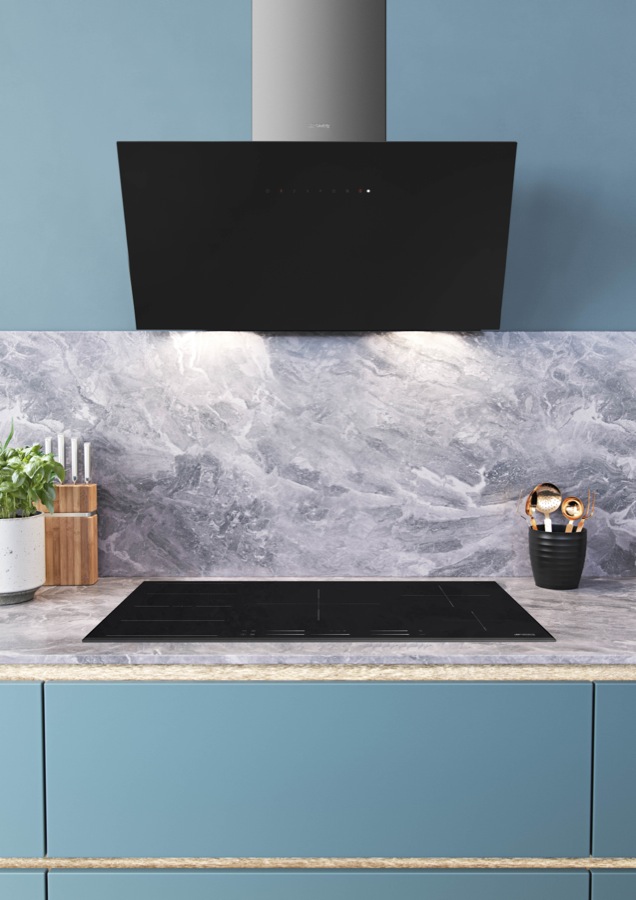 Smeg – Expanding its existing cooking range, Smeg has introduced a collection of intuitive slider controlled hobs. All models have 14 power settings, as well as MultiZone which can link two zones to create a 200 x 390mm area.

However, although sales have been slower, they are still on a positive incline. Jennifer Taylor, head of brand at Hotpoint, points out: “[Induction hobs are] generally continuing to grow, but at a slower pace than previous years.”

The continued growth of induction in a slower environment is arguably because of its popularity at the top-end of the market.

It’s the view of managing director at Bertazzoni UK and Eire Maurizio Severgnini who highlights: “[Induction hobs] tend to be favoured by the most affluent households, with 13% in socio-economic group A owning an induction hob, compared to just 3% in group E.”

Kuppersbusch – The 900mm Profession+ KMI9850 is a 2-in-1 induction hob and downdraft extractor in a black finish with stainless steel frame. It features the Individual VKM 1800 ventilation grid, with Plasma technology, which can be personalised in six colours

And this is confirmed by KitchenAid’s channel controller Lee Collett, as he comments: “Sales of induction hobs are generally resilient to economic shifts.”

But to truly topple gas as a go-to fuel choice, induction still has ground to make up across the market.

Nick Platt of Hoover Candy UK notes: “While induction is the biggest area of growth, looking at the last three months, it still only makes up 3% of sales overall, whereas gas still commands just over 40% of hob sales.” 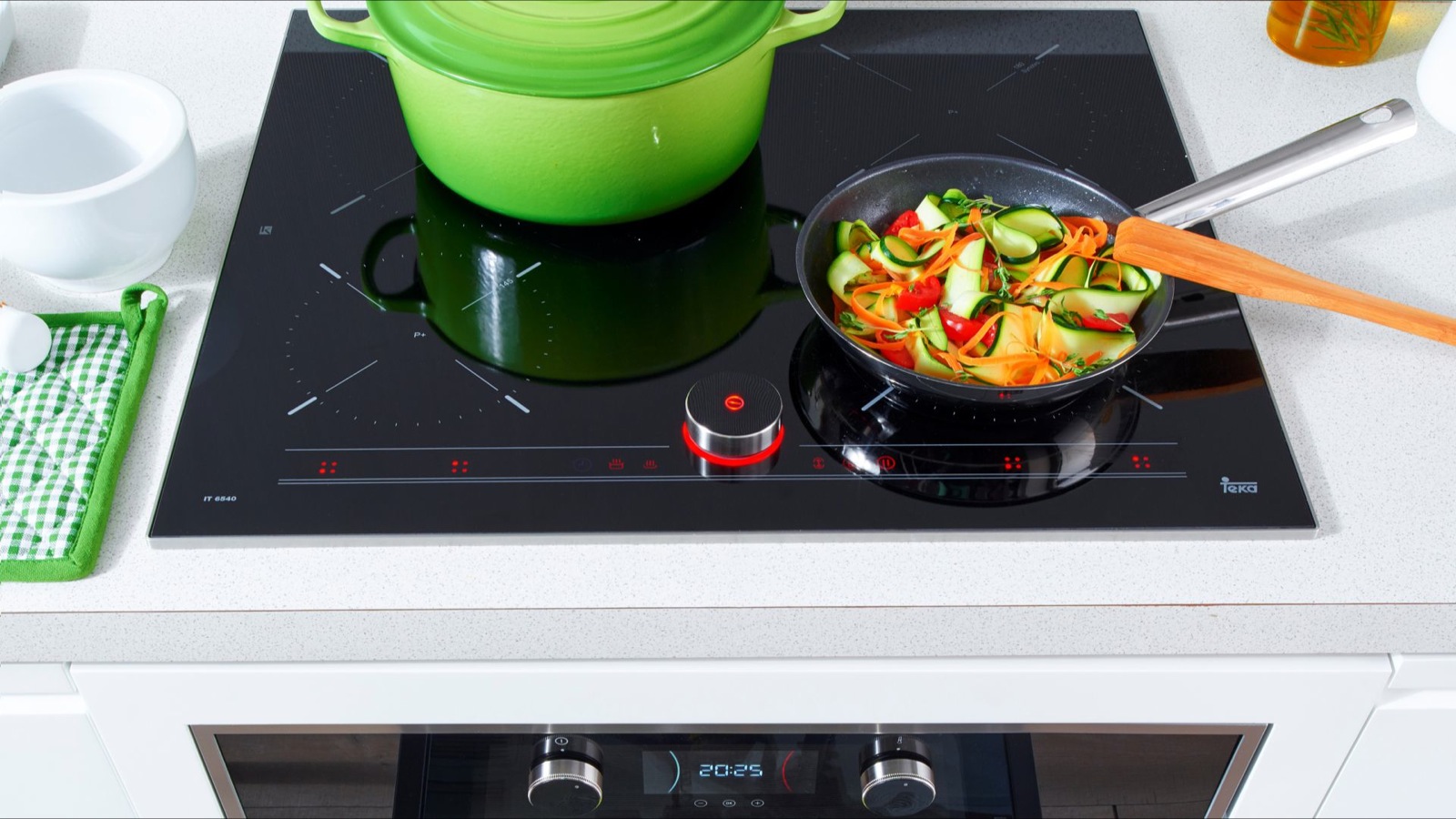 Teka – The 600mm iKnob Induction Hob features a detachable magnetic knob. Attaching it activates the functions and allows the user to select the power level and the cooking time for each zone. When removed, it facilitates easier cleaning

Moving forwards, however, the percentage of sales that gas commands is likely to reduce further, as both Indesit and Whirlpool point to the recent Houzz UK 2018 Kitchens Trends Survey in their evidence.

Sara Bazeley, brand manager at Indesit, draws on the fact that “41% of kitchen renovators opted for an induction hob when updating their kitchen,” and brand marketing executive of Whirlpool Sinead O’Brien points out that “only 29% of consumers opted for gas.”

So, for kitchen specialists who operate in the mid to top-end of the market, induction hob sales are instrumental for success.

We reported last year sales of induction hobs through these channels accounted for approximately 50% of the total induction hob market. But industry experts suggest this figure has grown. 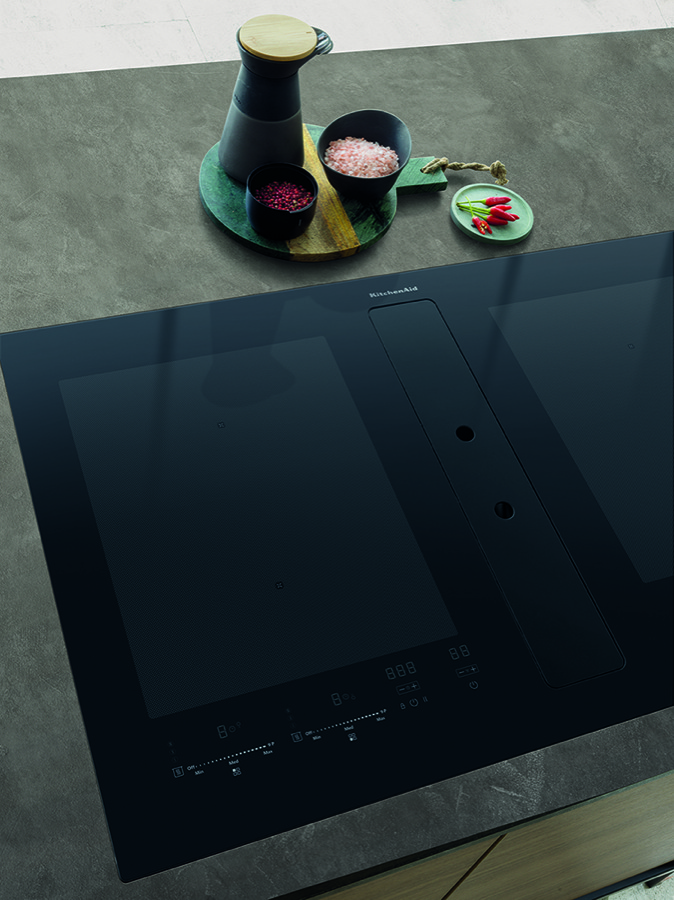 Maurizio Severgnini of Bertazzoni highlights: “From our perspective, especially with high-end kitchens, around 80% of kitchen specialists have opted for induction.”

And Jennifer Taylor of Hotpoint reports a similar situation: “Sales through the kitchen specialist channel have indeed continued to grow.”

She goes on to say this is the case despite the fact “induction hobs are not typically the ‘go-to’ hob choice for the mid-market housebuilders due to their cost.”

The cost of induction hobs has traditionally been the major stumbling block for most consumers when considering a purchase but industry experts report it has become less of an issue.

Matt Dougan of GDHA says “[Induction hobs are] definitely appearing across all levels of the market now, most notably at lower price points than in previous years.” 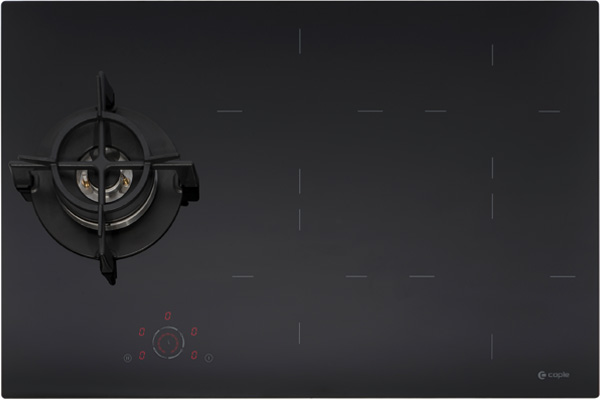 Caple – the C896IBK induction and gas hob allows consumers to pick and choose their preferred cooking method. It features a black, frameless design which can be mounted flush to the worktop. It has four induction zones which are operated via a 10-power level digital display

And it is this reduction in cost, providing wider availability, which will allow more consumers to become aware of the benefits of induction hobs. Together with the likes of 13amp ‘plug and play’ models, induction will become ever more accessible. 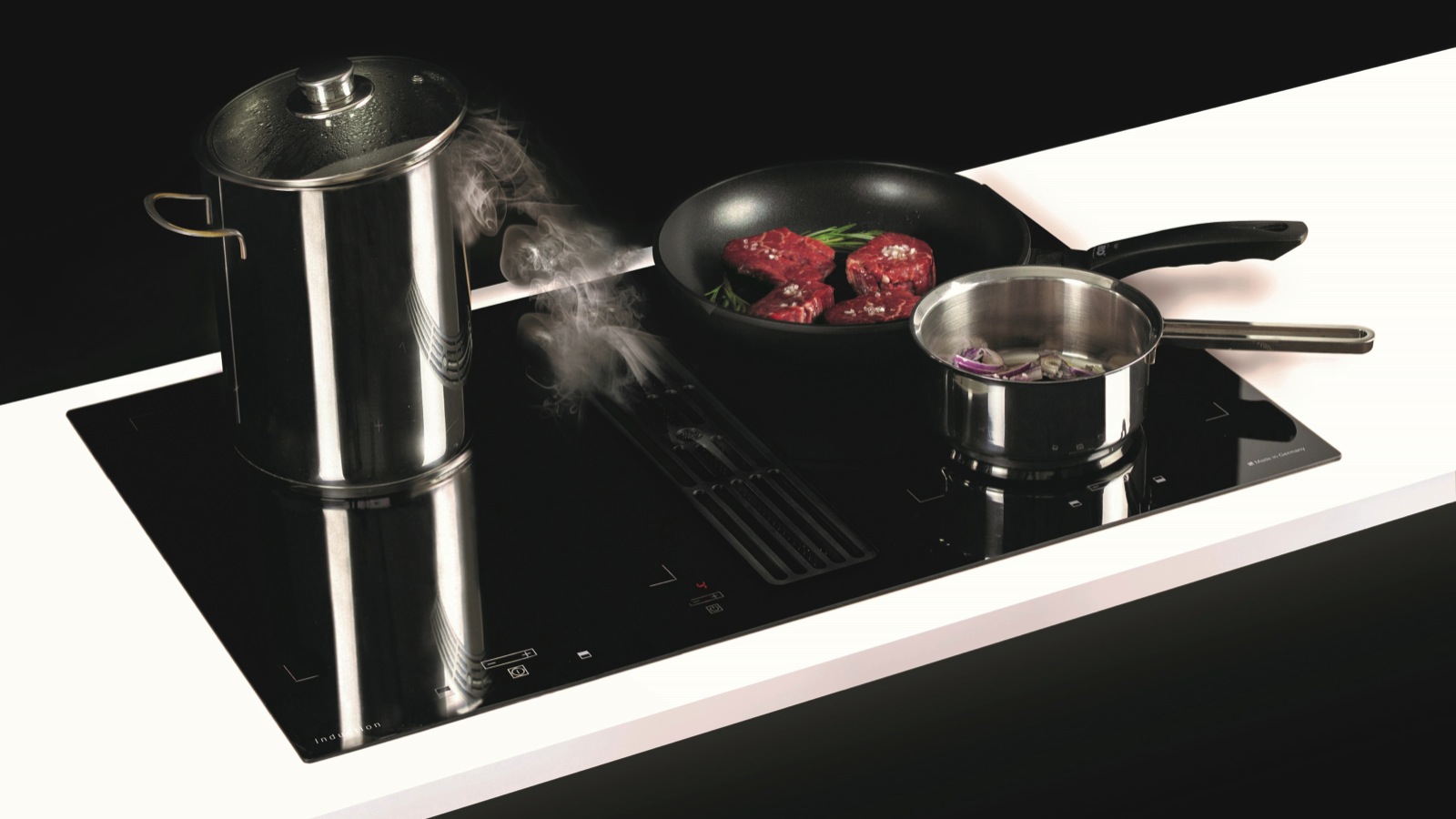 Airuno – A combination countertop extractor and hob, the Combi-flow 800 is a frameless black glass induction hob with built-in extraction. The worktop extractor operates at a maximum rate of 600m³/hr, is energy rated A and has a noise level rating of 48-68dB

Sinead O’Brien is quick to point this out: “As consumers become increasingly aware of induction as an energy efficient and environmentally friendly alternative, gas is getting squeezed out as induction technology becomes more competitive.”

However, she does echo the concerns of Jennifer Taylor at Hotpoint and Maurizio Severgnini at Bertazzoni: “Due to the initial cost of induction hobs, however, they continue to be most popular among the most affluent households.”

It always used to be the case that the premium models were easily distinguishable from the mid and lower priced models due to the differences in technology.

However, the pace at which tech now filters down the market is rapid and highlights the fact it is no longer exclusive to premium brands. 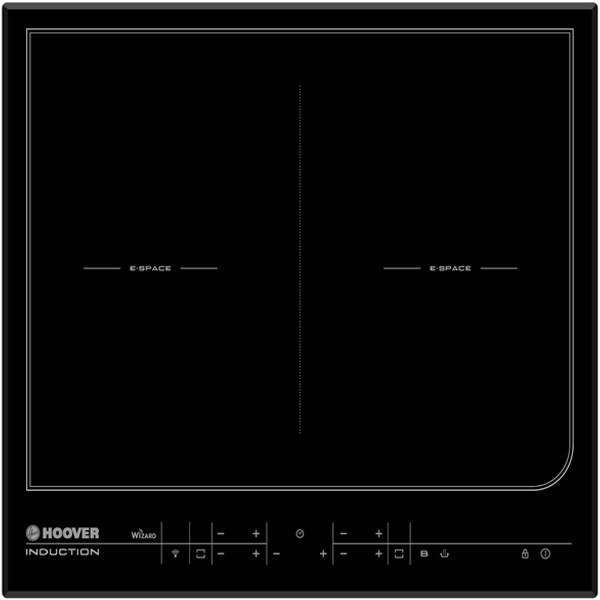 Hoover – The Hoover HESD4 600mm Wi-Fi Flexi-Zone Induction Hob can be operated via the Hoover Wizard app. It has 15 power levels, with boost options on all zones, while each individual zone has its own timer

This availability at mid-market prices is evidenced by Nick Platt of Hoover Candy UK, who highlights: “Bridging zones and connectivity are two of the most recently introduced features that are driving interest in induction.”

So, in order to keep ahead of the market, premium appliance manufacturers have had to work even harder, with integrated extractors now a coveted feature at the luxury end of the market.

Falmec, for example, has introduced Sintesi. Fiona Barker-Scott, brand manager at Falmec UK, explains it “combines cooking and extraction in one single unit.” 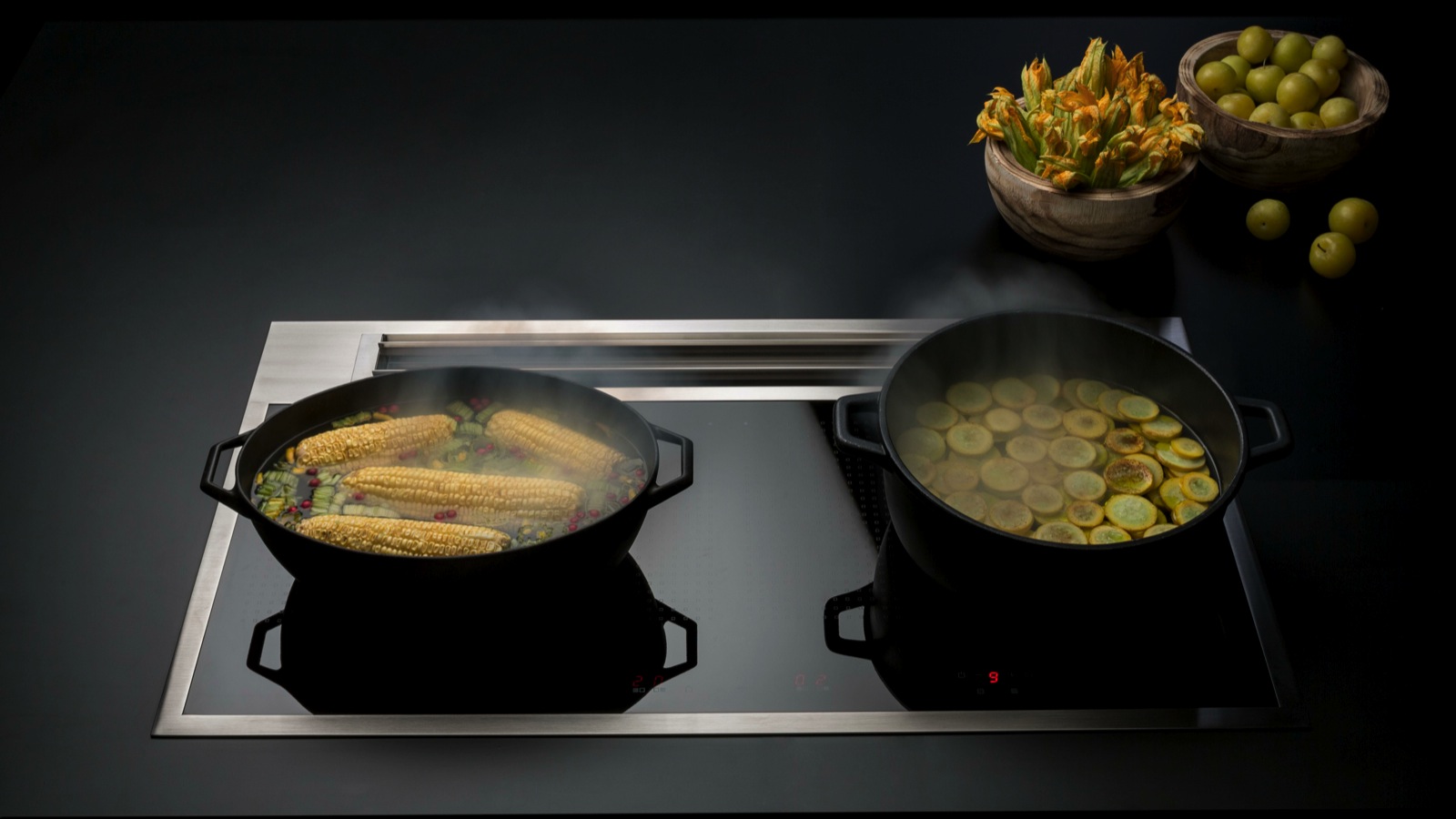 Falmec – Sintesi is a multi-functional one piece kitchen extractor and induction hob which features Falmec’s Carbon.Zeo filter. It also has nine speed levels with an additional boost function, allowing for rates of extraction of up to 600m³/hr

The popularity of these combined units is echoed by the chairman of Airuno Geoff Baker, who states: “The introduction of one-piece induction hob and extractors has really helped drive induction sales over the last nine months.”

But the industry doesn’t stand still and, going forwards, it is of course connectivity which will be the next game-changer in the induction market.

And who knows, perhaps voice-controlled operation through the likes of Siri and Alexa will take a starring role? 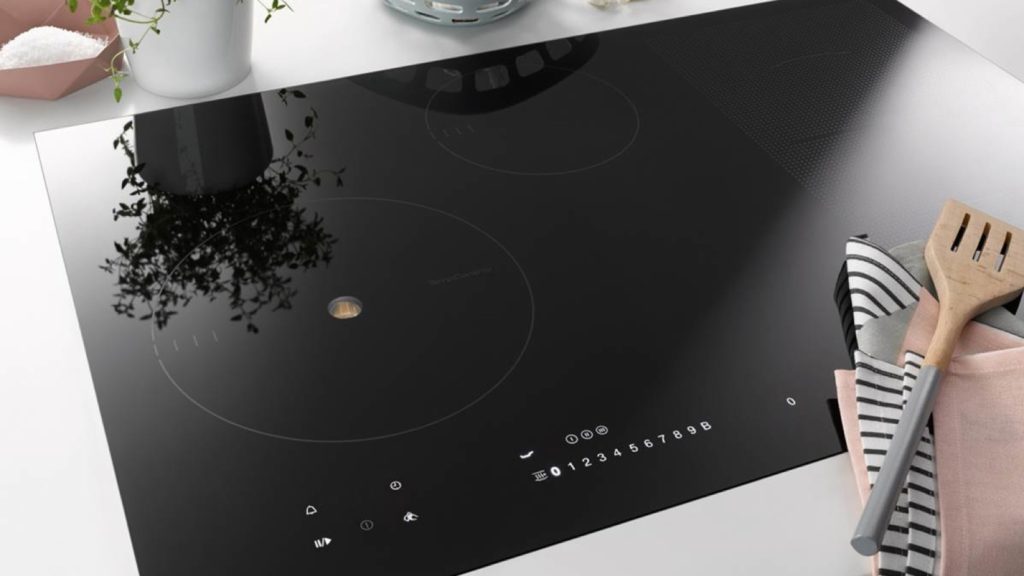 Miele – The KMDA 7774 FL Induction Hob with Integrated Extractor is framed by two PowerFlex zones which allow two individual rings on either side to be combined to form one large ring or a rectangular zone. In addition, TwinBooster technology delivers extra power when needed

Geoff Baker of Airuno believes that “hob to hood technology is the next major technological breakthrough.” But this is not simply anecdotal; there is factual evidence to back the continued march towards the smart home.

Offering some market statistics, Sinead O’Brien of Whirlpool comments: “With 8 out of 10 consumers aware of the connected home, consumers may now expect to see connected appliances in store.” 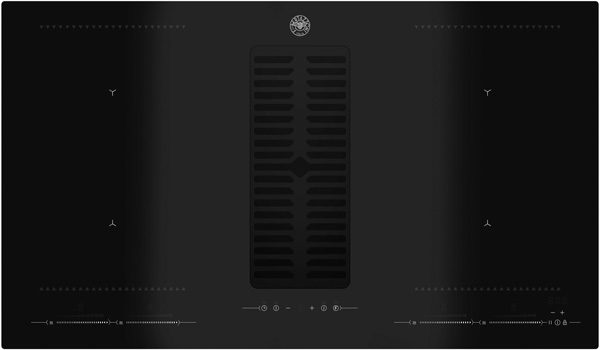 Bertazzoni – The Bertazzoni P784ICHNE 780mm induction hob with integrated ventilation has four power zones, while the extractor has a maximum airflow of 720m³/hr. It has an energy efficiency rating of A++ and measures 750 x 520mm

However, she has reservations about the pace of the development and says the kitchen retail channel must play its part in educating consumers: “60% of people do not entirely know what the connected home entails.

“Kitchen specialists must be able to demonstrate their expertise, as 40% of consumers further agree there is a lack of information for the products available.”

However, advancements in appliance technology are not just based on flash app controls, allowing remote or voice operation. A key focus in the industry is sustainability, utilising waste materials and reducing energy use.

Sara Bazeley of Indesit states: “[Our focus] will continue to be about reducing resource consumption, protecting the environment and making life easier for the consumer.” 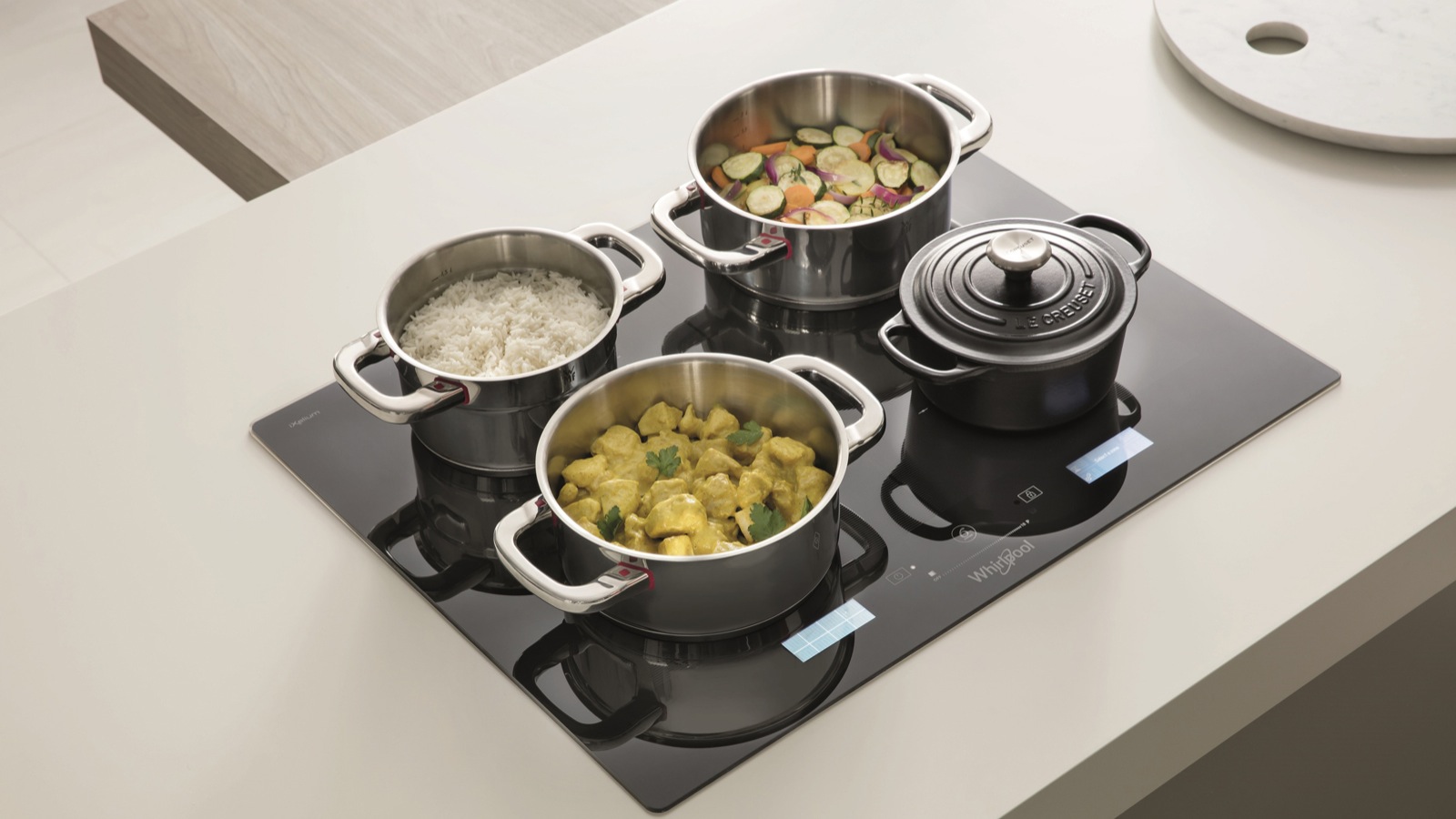 Whirlpool – The Whirlpool SmartCook induction hob (SMP 778/C/NE/IXL) brings together 6th Sense technology with a modern design, while an intuitive touch interface guides the user every step of the way

And Sinead O’Brien of Whirlpool draws on a similar sentiment: “The environment today is a focus for most of us, and with the increasing cost of energy and utility bills, everyone is looking to run the home more economically.”

She continues: “It is anticipated that the future will see increasing sales of induction hobs, in all areas of the market, which contribute to long-term energy and resource saving in the home.”

Given the increased focus on the environment and growing sales, it certainly looks like it’s green lights all the way for induction. Although the pace of sales may have slowed, the march is relentless.

With induction already taking on gas at the top-end of the market, it surely is only a matter of time before it conquers all hob sales.

The Durham Collection unveiled by LochAnna

Most Wanted products from June