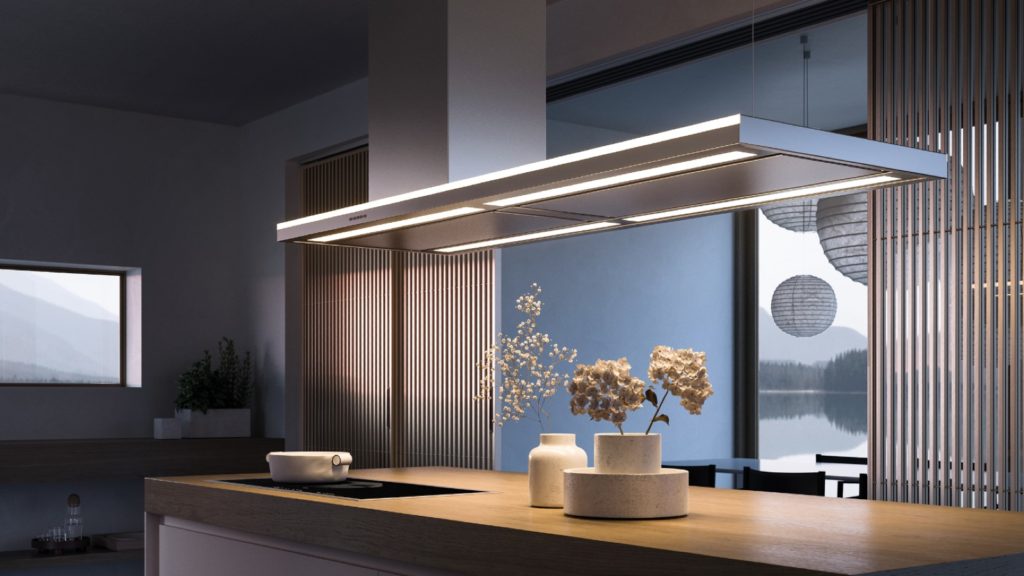 The Lumen NRS, from Falmec, features the company’s Noise Reduction System and is available as a wall-mounted or island-mounted unit measuring 900mm wide.

At the premium end of the market, the change in cooker hood styling is indisputable with venting hobs now becoming a go-to specification, alongside the more ‘traditional’ decorative designs.

Country manager of Novy UK Owain Harrison puts some figures to sales, when he comments: “When Novy entered the UK five years’ ago, the company launched its first venting hob.

“Fast forward to 2022, where we now offer a range of different venting and vented downdraft induction hob models that represent almost 50% of our UK sales.

“This percentage looks set to increase further by 2023.”

But venting hobs are not the only extraction sales in the premium market and in fact are set to become less exclusive, as market product manager of Fisher & Paykel Jo Jackson adds: “As this product becomes more popular, it will become more affordable and widely available.”

It is not only the slimline aesthetics of the venting hood which has gained attention as the visual lightness has been replicated in island models, such as the Lumen NRS by Falmec and Phantom by Novy.

It is the technology behind the looks which is of equal importance in the living space of the kitchen.

A demand for cooker hoods to operate as seamlessly as their aesthetics has seen the development of technology such as condensation-free surfaces, as well as enhanced integral lighting. 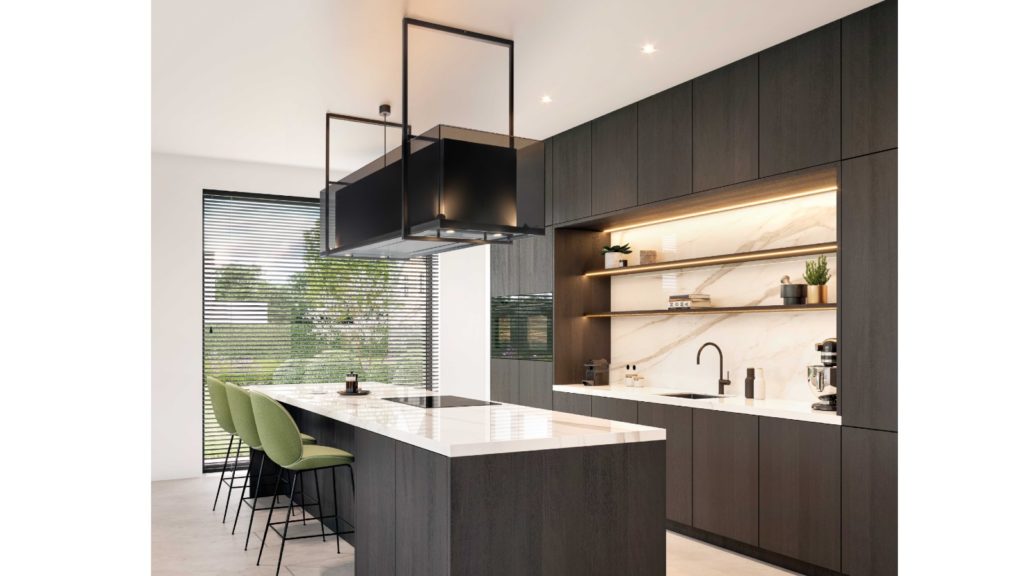 This sees the hood form a holistic part of the architecture, rather than a separate appliance installed into the kitchen scheme.

Product manager – taps and hoods at Franke UK Alison Booth explains how this has impacted on the company’s research and development.

Addressing the issue of condensation exacerbated by the growth in induction hobs, she comments: “Anti-drip hoods that capture rising steam before it condenses on surfaces are growing in popularity.

“We are adding a new wall-mounted model to the range which is ideal for stopping any drips, condensation and unsightly moisture stains from cooking, which can be especially problematic with induction hobs.”

She adds there is also a greater emphasis on kitchen illumination, not only for practical task lighting but to create a mood.

Priced at the premium end of the market, she suggests this helps retailers to upsell.

At the higher end of the market, as well as removing odours, steam and grease from the air is the demand for the extractor to become more of an air conditioner. 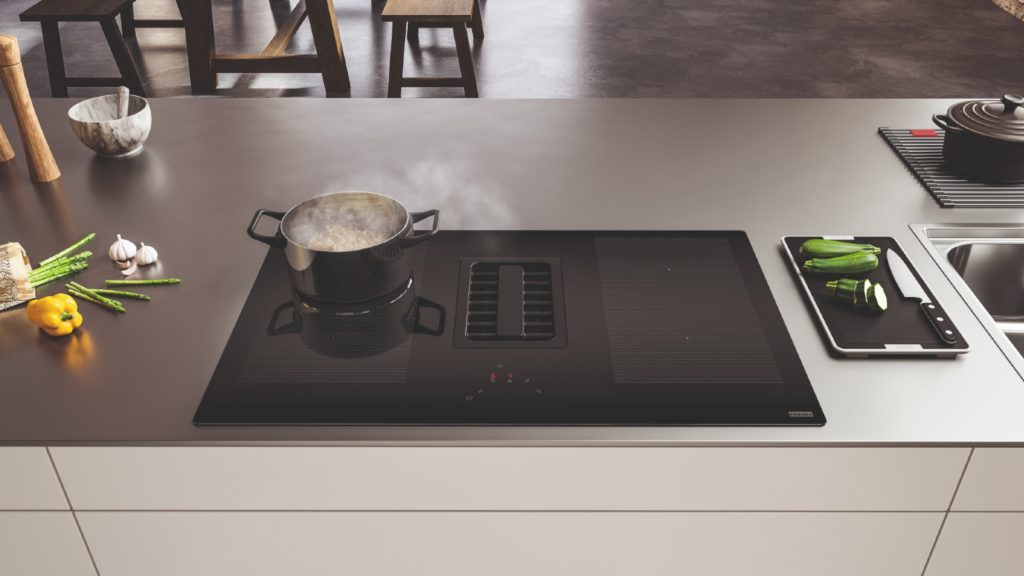 In fact, Alison Booth of Franke says the company is set to launch a premium cooker hood with integral air conditioning: “Franke is expanding its cooker hoods offer with an augmented range from May with a multi-functional premium model incorporating Wi-Fi, voice activation, a touch screen computer, as well as an air conditioning unit.”

Enhanced air quality in the home also provides some interesting challenges, as ducted models are more effective but yet less energy efficient.

It has seen a move towards recirculation models specification, as managing director of Falmec UK Sean Drumm continues: “Sales are rising for the quieter hoods and recirculating models, especially in open plan layouts.

“The recirculating units prevent the loss of warm air being vented out, so are becoming more popular as the importance of energy efficiency rises up the domestic agenda.”

Owain Harrison agrees and explains not every home can have a ducted hood, plus the move towards environmental house construction is spurring sales: “Many kitchens in flats and apartments have no access to extract to the outside, and with more energy efficient and eco homes being built, such as Passivehaus projects, we are seeing a rise in demand for pure recirculation hood models.”

Recirculation hoods also pose the additional issue that they can be noisier than their ducted counterparts. 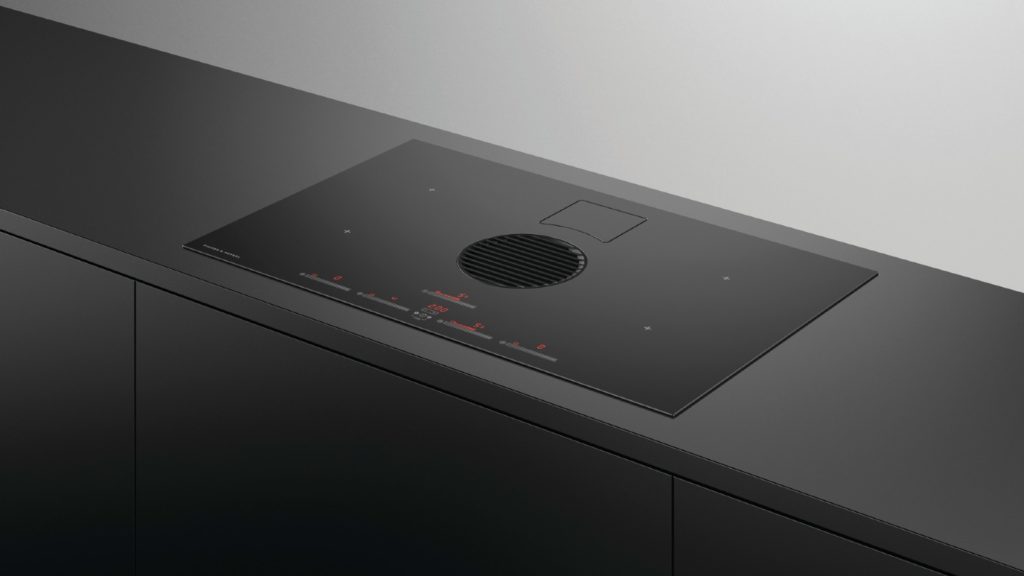 Again, it gives the kitchen retailer an opportunity to sell up to models with noise reduction. Owain Harrison explains: “This is where there is a difference between mid-priced hoods that will work in recirculation mode, but tend to be noisier than extraction versions, and a dedicated recirculation model from a premium brand, like Novy, where the appliance is developed to ensure that sounds levels remain low.”

Falmec introduced its Silence Noise Reduction System 10 years’ ago and according to the company it reduces sound by 86%.

While Franke recently took the decision to redesign its motors for quieter operation, as Alison Booth adds: “Cooker hoods models that are low noise are also driving sales, particularly with the open plan trend.

“Responding to consumer needs, we’ve recently undertaken a major development project to redesign the motors in many of our existing cooker hood models and new additions to the range which will reduce the noise level by 5db for a more relaxing and sociable kitchen environment.”

An equally invisible factor affecting extraction sales are the running costs of the appliances, with Sean Drumm highlighting a cheaper model could see consumers buying twice.

He states: “Inexpensive hoods cost more to run as their fan motors and lighting are of the lowest quality. What’s more, they don’t last long so are a false economy in the long term.

“Selling up for extractors is vital in my opinion for all these reasons.”

He concludes: “At the end of the day, customers want to remove any odour and grease from their homes, so they are demanding extractors that offer better airflow and cost savings, whilst being more energy efficient and quieter than ever before.

“Customers will pay more to ensure all these features are included.”