Still in their infancy and priced at the premium-end of the market, have venting hobs started on a journey to become more mainstream?

Still in their infancy and priced at the premium-end of the market, have developments in venting hobs started them on a journey to become more mainstream? 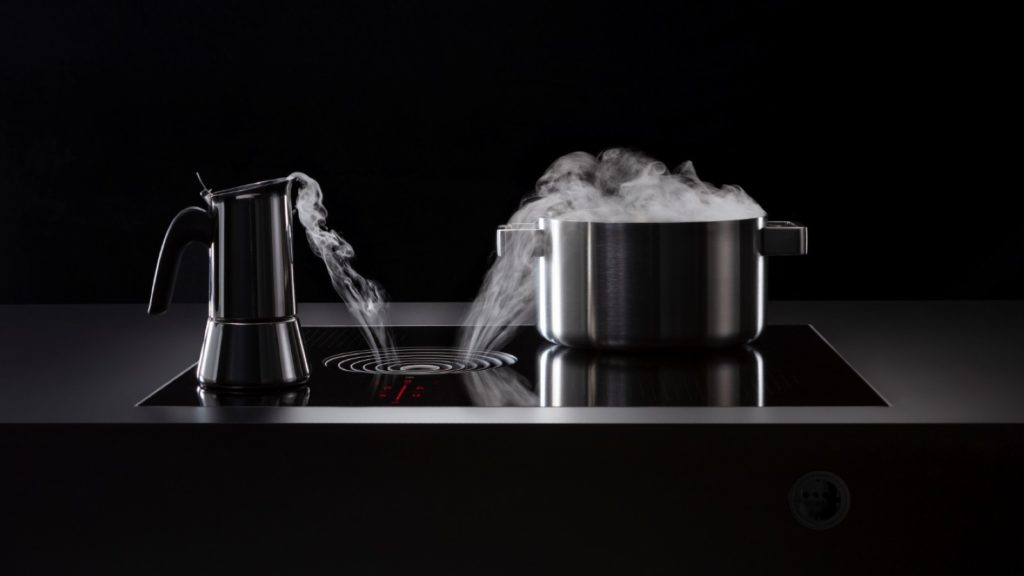 Open-plan living has impacted kitchen design at all levels – from cabinetry designed to blend into the ground floor through to concealed appliances.

It is particularly true of cooker hoods, where downdraft models have now been integrated into induction cooking surfaces to create venting hobs.

Founder of Bora Willi Bruckbauer explains: “For the modern kitchen, downdraft extraction systems integrated into the hob rather than as separate overhead hoods are an increasingly popular option, because of all the advantages practically and aesthetically that they bring.

“A downdraft cooktop extraction system is particularly advantageous in the open-plan setting, where a head-height extractor hood above an island can create a visual barrier and conflict with the ambience in larger spaces, and in small kitchen such cooker hoods can appear bulky.”

Willi Bruckbauer points out: “This is a growing market although still at the higher-end price-wise.” 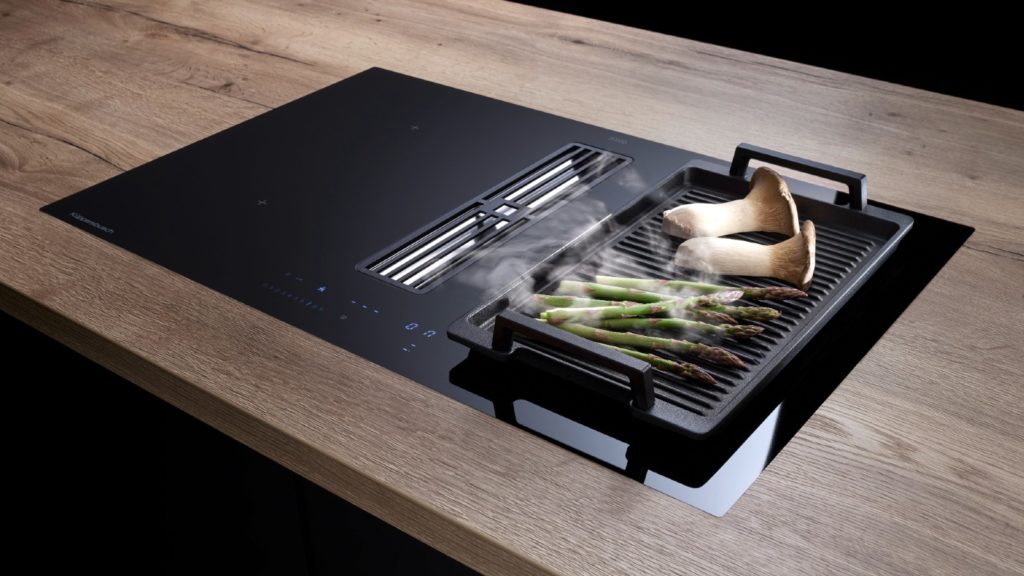 Part of the Kuppersbusch K-Series 5, KMI8560.0 is a two-in-one induction hob level extractor, with 10 power levels and plasma filtration

And consumer marketing manager for CDA Carrie Bell agrees, adding: “The market is still very much in its infancy and is largely confined to the upper end.

“There aren’t that many products on the market and price is a factor. Only a small proportion of our induction hob sales is for our venting hob.”

Yet the venting hob was once only available from specialised brands and is now available across a wider selection of well-known appliance manufacturers.

Westin made its first foray into venting hobs at Kbb Birmingham 2018 and was joined at the show by Belgium manufacturer Novy launching into the UK with its induction hobs with integrated downdrafts.

But a real drawback of the venting hob has been the reduction of storage space in the cupboards, beneath the appliance, limiting the kitchen design. 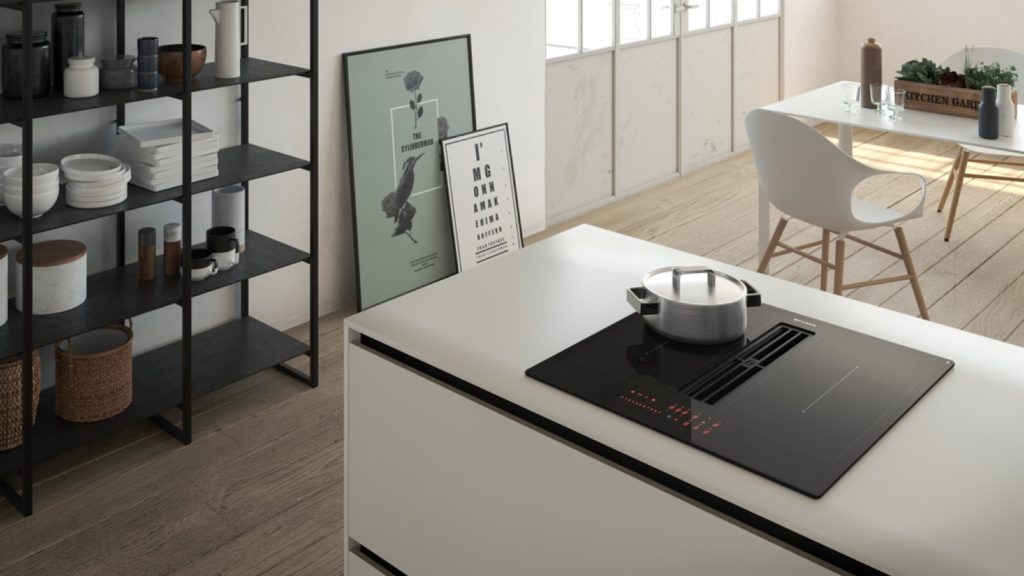 The Galileo Smart 60, from Faber, has been designed with a compact design and waterproof motor allowing for storage space, such as a utensil drawer, to be fitted underneath

Carrie Bell of CDA says when specifying venting hobs designers need to consider “how it fits into the kitchen design – and the fact that this type of hob restricts storage space and the possibility to install a built-in oven below.”

It means that, along with a premium price tag, venting would only be suited for larger kitchen projects, such as those with an island.

Sales and marketing director at Franke UK Jo Rawstron continues: “When installing integrated hob extractors, it is important to ensure the kitchen is large enough and offers enough storage space to make the loss of the undercabinet space inconsequential for the homeowner.”

However, there have been recent developments in the design of the venting hob, with select models now allowing for storage space beneath the appliance.

Export manager of Pando Inaki Iturbe explains: “One of the problems with many induction hobs featuring built-in extraction is that space below is lost for storage.

“We have solved this at Pando with innovative design including high spec German motors that provide maximum performance with minimum noise, a clever installation system that means there is still space below the hob for drawers, bridging zones, slimline profile and sleek slider controls.”

This move to provide storage space below the appliance has also been considered by Caple which has introduced the DD780BK induction hob downdraft.

It doesn’t have to be installed on an island and has usable cupboard space below.

Plus, Faber has recently introduced a smaller version of its Galileo venting hob, measuring 600mm, and with a waterproof motor allowing for storage space, such as a utensil drawer, to be fitted beneath the appliance.

Certainly, there has been a focus on concealed extraction over the past couple of years. 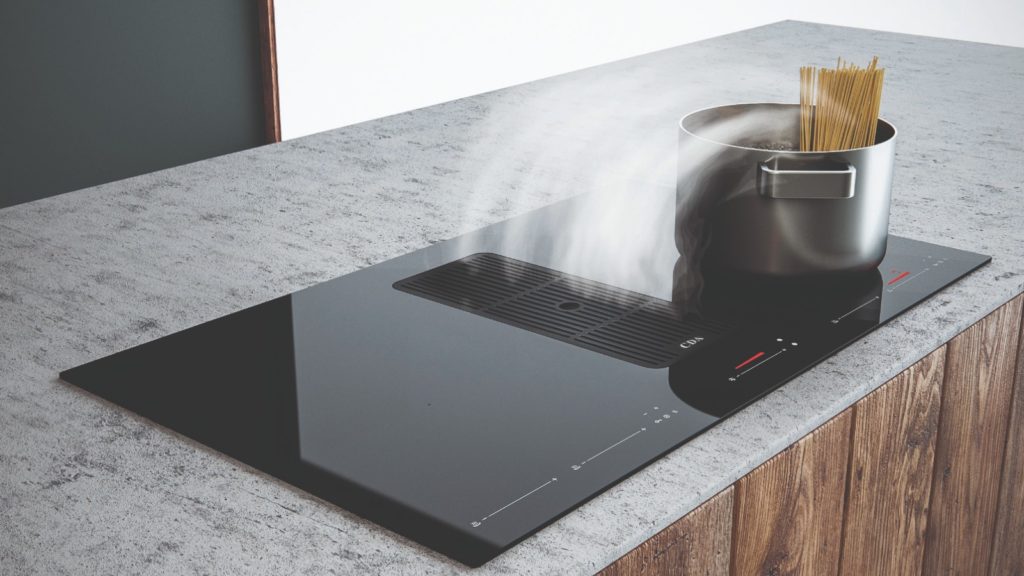 The Indu-Air from CDA features a four zone induction hob with bridging technology and a built in extractor. It is operated by slider controls

Downdrafts with their rise and fall motion and even glass-lit panels have become a focus of home interest magazines and kitchen showroom displays, attracting consumer attention.

But can an appliance which does it all – cooking and extraction – be as effective as separate appliances? Will Bruckbauer says yes.

He comments: “In the case of Bora, they are much more effective. Downdraft extraction stops cooking vapours and odours from rising in the first place by extracting them from the place they are created. Steam and odours rise at a maximum speed of one metre per second.

“However, the Bora cooktop extractor instantly draws these off in a downward direction at approximately four metres per second.

“The result: vapours are fully extracted and odour and grease particles are unable to spread around the room, settle on unit surfaces or penetrate materials.

“Instead of spreading around the room, grease particles released while cooking are trapped in the stainless steel grease filter.” 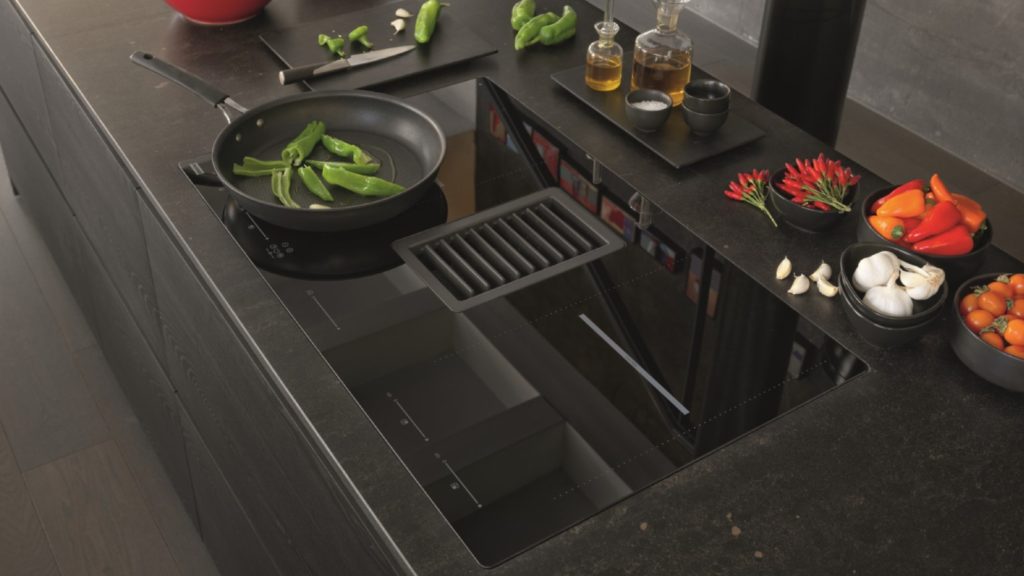 So it may just be a case of ensuring the extraction performance is suitable for the room, as Jo Rawston explains: “Whether your’re installing an integrated hob extractor, or any other type of extraction, it’s always crucial to be aware of the minimum performance required of a hood, by considering the room dimensions and volume.

“The room volume figure is then further multipled by 10 to obtain the optimum rate of airflow for that room, based on the need to change the air 10 times an hour.”

But what of the future of the venting hob? Will the niche of induction complete with integrated downdraft extraction continue to rise? 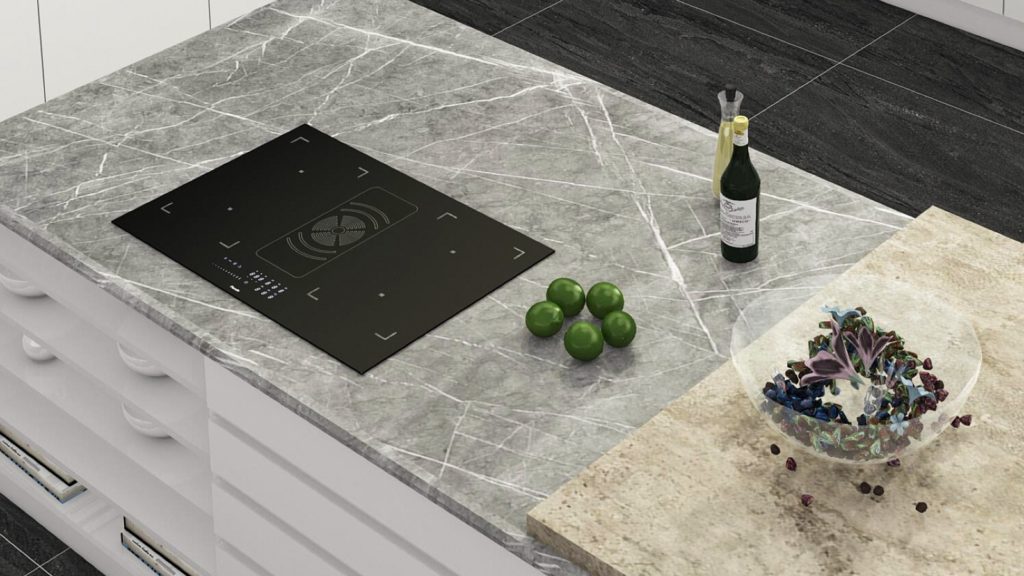 E391 induction with extraction, from Pando, is a slimline design that can be built-in under 197mm, leaving space for drawers. The hob has slider controls, ceramic carbon filters, and operates at a maximum of 61dB.

Export manager of Pando Inaki Iturbe says: “Although induction with extraction is relatively new, I believe that this is an idea that will grow at the upper end of the market, especially in kitchen designs that feature a cooking island.”

And Jo Rawstron of Franke UK agrees commenting: “We anticipate steady growth given the continued appeal of open plan living, integrated hob extractors are a good open in open plan spaces as everything is kept at hob level for a very discreet and steamlined aesthetic.”

Whereas Carrie Bell of CDA is slightly more hesitant when she adds: “I think that as more products come on to the market and consumers become more aware, we will see an increase in sales, but it will be mainly at the top-end.

“Downdraft for use with modular hobs has, after all, been with us a long time but has never been a big seller.” 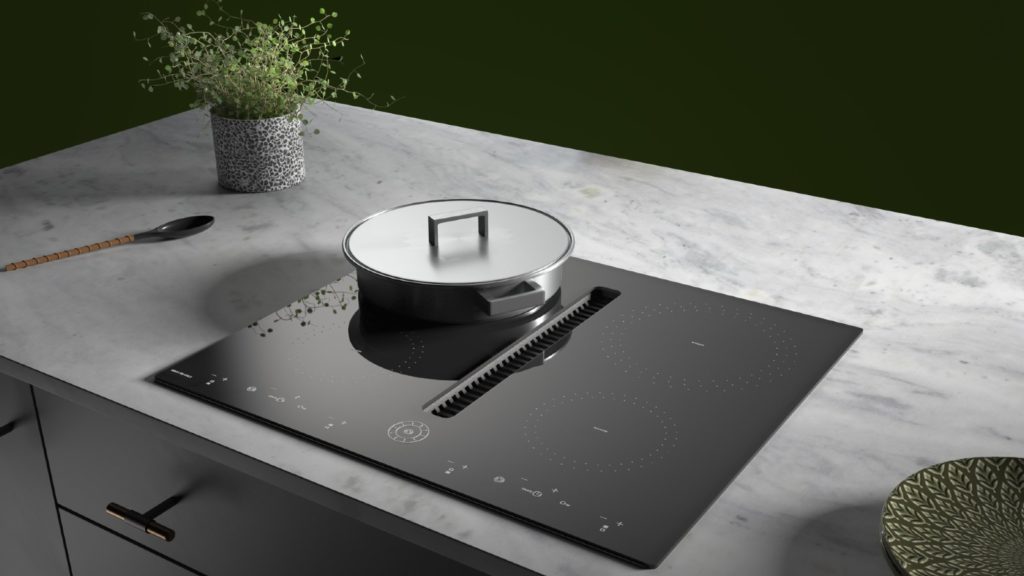 The Diamond 60 from Air Uno has been designed for smaller kitchens and can be installed as a recirculation or ducted model. It has a removable grease filter and 1.5 litre liquid collection channel.

Yet, with the sticking points for venting hobs slowly being resolved from availability of brands, through to allowing storage below the appliance, surely it’s only a matter of time before manufacturers focus on price?

In fact, managing director of Küppersbusch Sales UK Bodie Kelay comments: “As a manufacturer we have expanded our offering at different price points to give retailers more choice, as well as product training to help highlight the benefits of the dual combination.

“We envisage venting hobs will continue to be popular as consumers create larger open plan kitchen designs and with home working spend more time at home.”

Just as the induction hob was firmly positioned at the top-end of the market, and is now more accessible, is it now not inconceivable to believe venting hobs could do the same and become more mainstream?