Undoubtedly induction hobs have been a success for cooking appliance sales, so much so it is gradually replacing gas.

Undoubtedly induction has been a success for cooking appliance sales, so much so it is gradually replacing gas hobs. 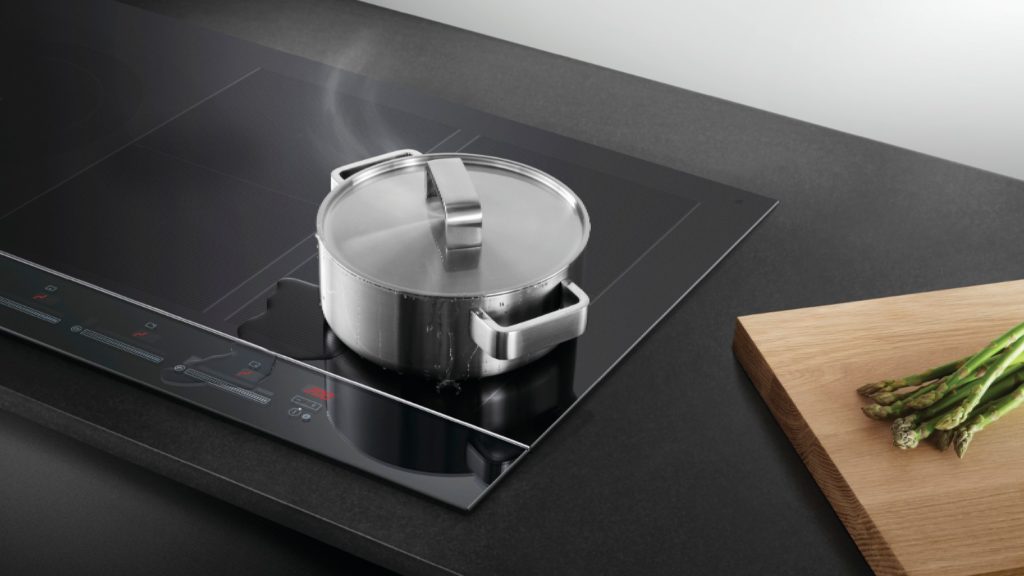 Measuring 900mm wide, the CI905DTB3 2 from Fisher & Paykel features four cooking zones that can be combined to create a larger area plus a dual zone. It also has a Powerboost to bring liquids to the boil in under a minute

In fact, it could be argued it is already the preferred choice for consumers, as Indesit brand manager Charmaine Warner points out: “According to a survey conducted by Houzz, induction hobs are the most popular type of hob with 41% of kitchen renovators opting for an induction hob when updating their kitchen.

“Gas is the second most popular type of hob, with 29% of renovators surveyed choosing a gas hob or cooker.”

Consumers have caught on to the benefits of induction over gas of speed, controllability and energy efficiency. 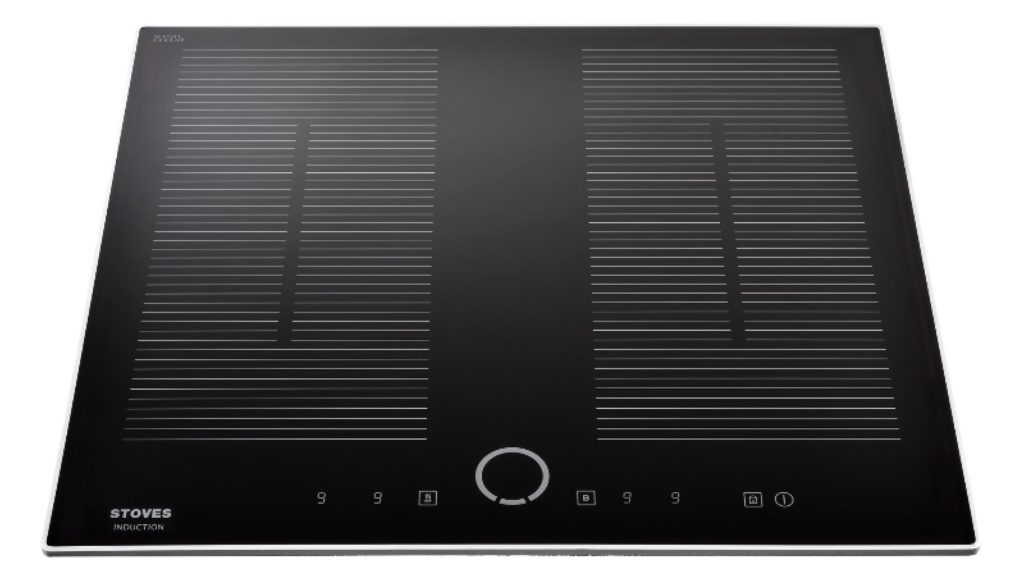 He says: “The growth of sales in induction is simply down to the benefits that it offers over ceramic and gas – namely faster, smarter, safer and greener.”

And head of marketing at Fisher & Paykel Helen Haider agrees pointing out: “More than ever before, people are extremely eco-consious and constantly making changes in their lives to help the environment.

“Those looking to reduce their energy usage are choosing to swap their gas hob for an induction cooktop.”

It could also be argued induction has become popular as it is more accessible, such as featuring on range cookers, as well as less price prohibitive. 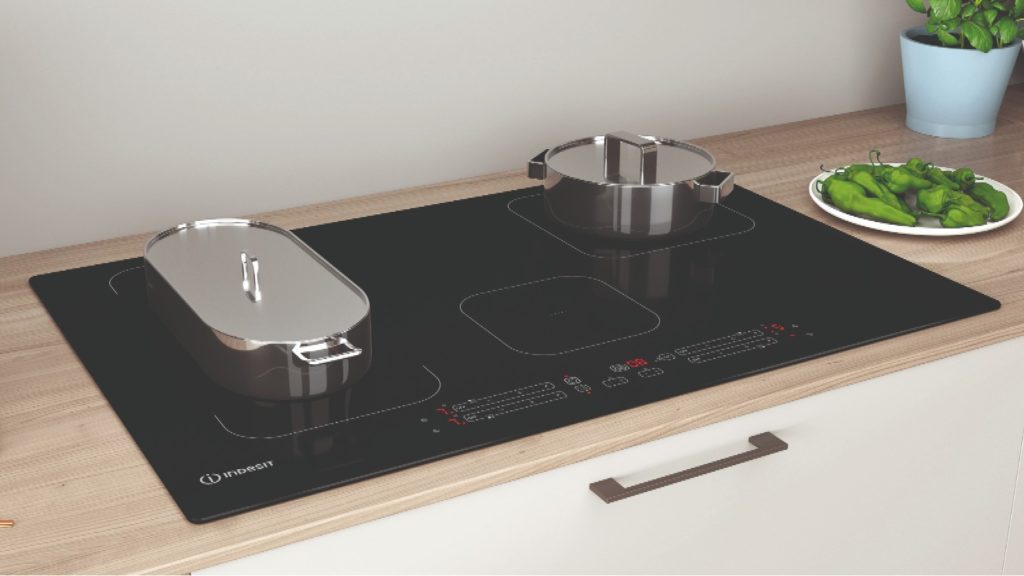 The Indesit Push & Go induction hob (IB 21B77 NE) can be started with just one push. It features four zones, including a boost zone

Liam Cookson of GDHA continues: “As induction has become more widely accepted and understood, manufacturers have been able to react to demand and expand the range of products they offer – bringing costs down to make them much more accessible at different market levels.”

And Charmaine Warner of Indesit agrees, stating: “Consumers are now able to purchase a state-of-the-art induction hob with a plethora of advanced features and programmes from entry level brands.”

The growth of interest in induction cooking could also simply lie in how we now live our lives. A demand for clean-lined aesthetics fits the style provided by an induction hob.

The Hotpoint ActiveCook induction hob features My Menu to guide users through the cooking process with step-by-step instructions. It boasts eight individual cooking zones, which can be combined to create one large cooking surface.

Hotpoint brand manager Kimberley Garner explains: “Aesthetically, the sleek black glass of an induction hob means that it blends seamlessly into worktops, complementing the rest of the kitchen and providing a stylish, uniform design.”

But the biggest change to everyone’s lifestyle has been the focus on hygiene following the outbreak of COVID-19.

Again, this is where induction hob sales can reap the benefit, as product manager of hobs at BSH Home Appliances Adam Norris says: “I think induction hobs appeal because they’re a sleeker-looking appliance. No protruding parts and one flat surface – so it not only looks good in the kitchen but is also easy to clean as any spills can simply be wiped up.

“Touch control models are also easier to clean with no control dials for dirt to get stuck behind.”

In fact, cleaning the home has become ‘a thing’ on social media, with the likes of Mrs Hinch. Marketing manager of Kitchen Ex Laura Gardiner adds: “Watching people clean their appliances has become ‘the norm’ with induction hobs being one of the most popular due to how easy they are to clean. People now look at influencers at their ‘go to’ for knowledge on buying big purchases.”

And there has been a greater interest in cooking, following the first national lockdown, and implementation of tier 3, where restaurants have been or are now closed. 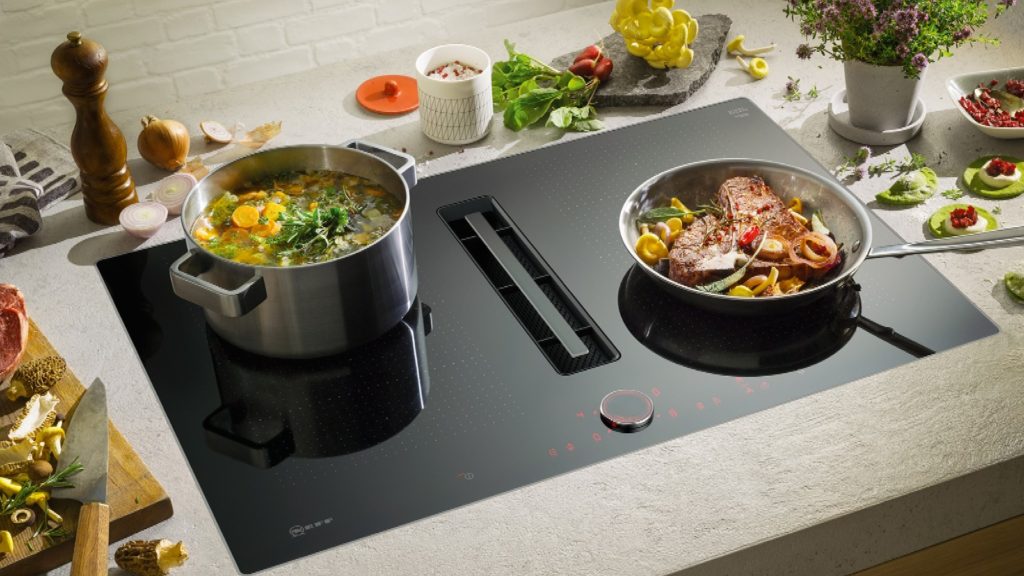 The N90 T58TL6EN2 induction venting hob from Neff features FlexInduction which lets users place pots and pans anywhere on the surface and integral extraction. It also boasts a FryingSensor to reduce the risk of food burning

Head of brand and digital at Whirlpool Tim Buszka reports: “Research conducted during July and August 2020 noted during the pandemic 50% of respondents enjoyed eating more family meals, and when asked how they spent their extra time at home, 49% enjoyed cooking more.”

This, combined with consumer’s refurbishing their kitchens having spent more time at home instead of going on holiday, also play into the hands of induction hob sales.

But what are the must-have features for induction hobs and how are manufacturers differentiating between higher-priced and more accessible models?

Liam Cookson of GDHA explains: “As demand at the top end of the market grows for induction, the products need to offer greater flexibility with multiple bridge zones to enable different-sized pans to be used and also moved around without losing heat.”

Sensor controls to prevent food spoiling or spilling over and assisted cooking functions such as recipe programmes, are also fast becoming must-haves at the top-end of the market.

“And lest we forget, induction with integral downdraft, which was once niche, is now available across a variety of brands

Without question, the market for induction hobs is growing and with Government focus on replacing gas boilers by 2023 will legislation further support sales?

Kimberley Garner of Hotpoint concludes: “There is no doubt that sales of gas hobs will be affected with plans to reduce the use of gas in home for more sustainable alternatives.

“Despite this, with the majority of existing UK homes currently receiving gas, and with much of the population having grown up with gas hobs, the mass change to induction will not be immediate.”

But she concedes: “Induction will undoubtedly become the predominant type of hob going forward.”

Most wanted from February issue

VIEWS: What are the changes to the Energy Label and rating system? Director of sales and marketing at… https://t.co/WVyaNSlCm4

NEWS: The Energy Label for household appliances has changed today and @AMDEA_UK is calling for Government to incent… https://t.co/N0UQN3Tk3n

NEWS: In our first virtual reader roundtable, we find out how kitchen and bathroom retailers are powering up for wh… https://t.co/iY596VH1rJ