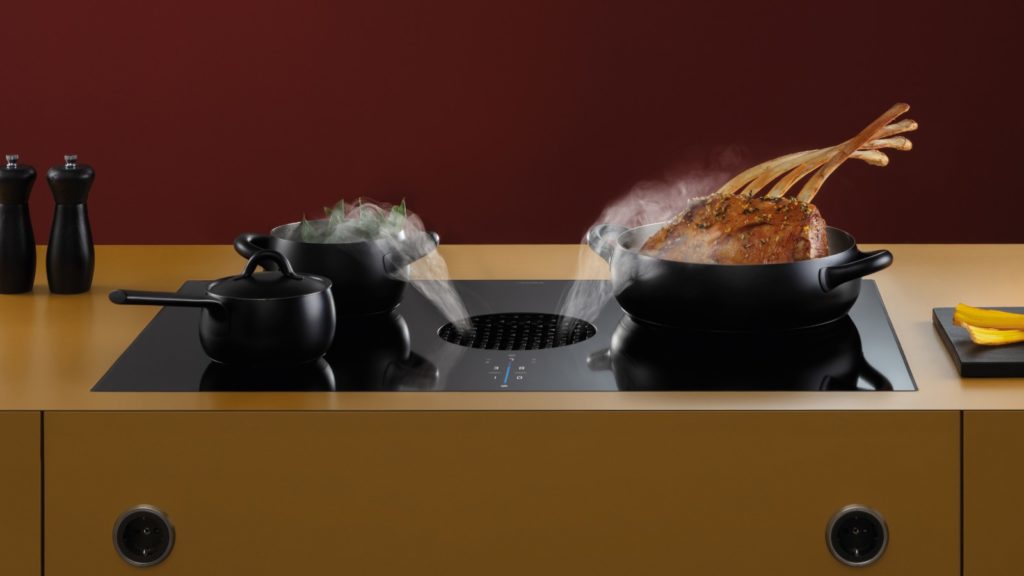 The Bora X Pure combines an extra-wide cooktop and recirculating extraction with an air inlet nozzle in a choice of colours, all of which is controlled by a slider.

Having been established in the UK for more than 20 years, induction hobs need little introduction to kitchen professionals.

But as this cooking sector matures, what is the next step in technology driving the design and sales of induction hob models?

And how can kitchen retailers encourage their consumers, perhaps even those experienced with earlier models, to trade up.

The induction hob has grown in size from the traditional 600mm up to 1200mm and with it the flexibility of a larger cooking surface.

Bridging zones and full surface cooking allow more pans to be used at one time and, together with automatic pan detection and tracking, enabling ease of monitoring for the user.

Head of marketing at Smeg UK John Davies comments: “Consumers are looking for flexibility, more and more, so multi-zone appliances or zoneless appliances offer that.”

He points to Smeg’s Area induction hobs, as an example, and these are joined by the likes of Fisher & Paykel Full Surface Induction Hob and Novy’s Pro series of induction hobs.

Owain Harrison comments: “Our Pro series of induction hobs are packed with technologies to make cooking easier, from independent minute minders on each hob, to a bridging function that converts two octagonal zones to a single zone for larger pans, to a Chef function that automatically links the bridged zones to set the temperature at a single touch from intensive cooking to simmering to keep warm settings.

He points out: “Customers are demanding more cooking space and more pans on the surface simultaneously – but without any reduction in power.”

Drumm exclaims that the performance of an induction hob, particularly on the lower settings, are “often found to be inconsistent on cheaper models.” 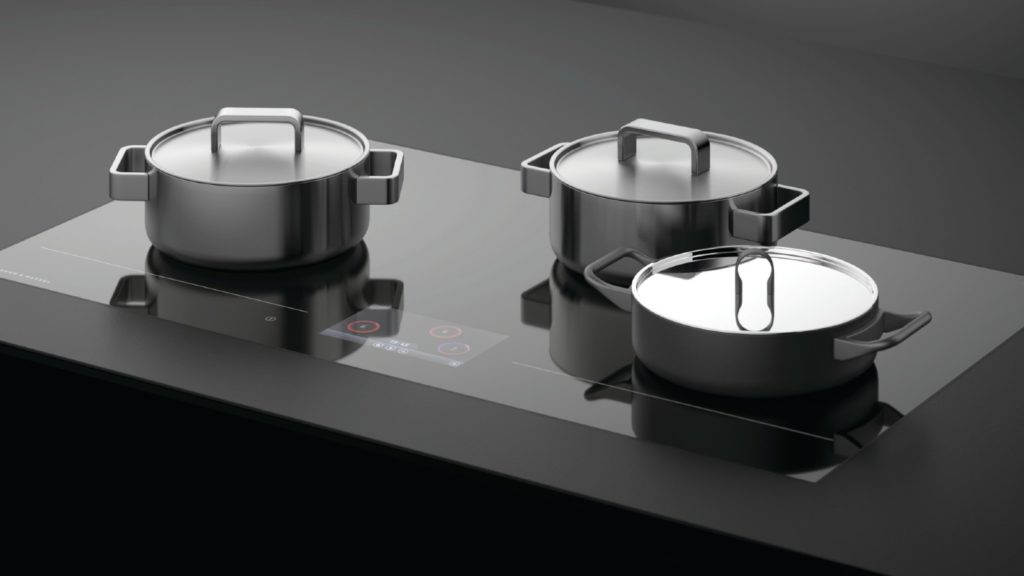 Fisher & Paykel has released its first full surface induction hob, CI926DTB4, where users can place up to six pots or pans within the cooking surface

As the hob powers up, so does the level of extraction for cooking odours or steam. This relationship between induction hob and extraction has seen the development and subsequent growth of the vented hob.

Founder of Bora Willi Bruckbauer comments: “The inclusion of downdraft extraction is a major advantage at the premium end of the market.

“By removing vapours and odours directly from the cooktop, it is like cooking with fresh air, a major advantage with today’s living kitchen lifestyles, where lingering cooking odours are not left to permeate soft furnishings.”

However, for a kitchen project which isn’t suited to a downdraft model, there are induction hobs which can connect to compatible cooker hoods, which can be found in the likes of Whirlpool, Miele and Novy brands. 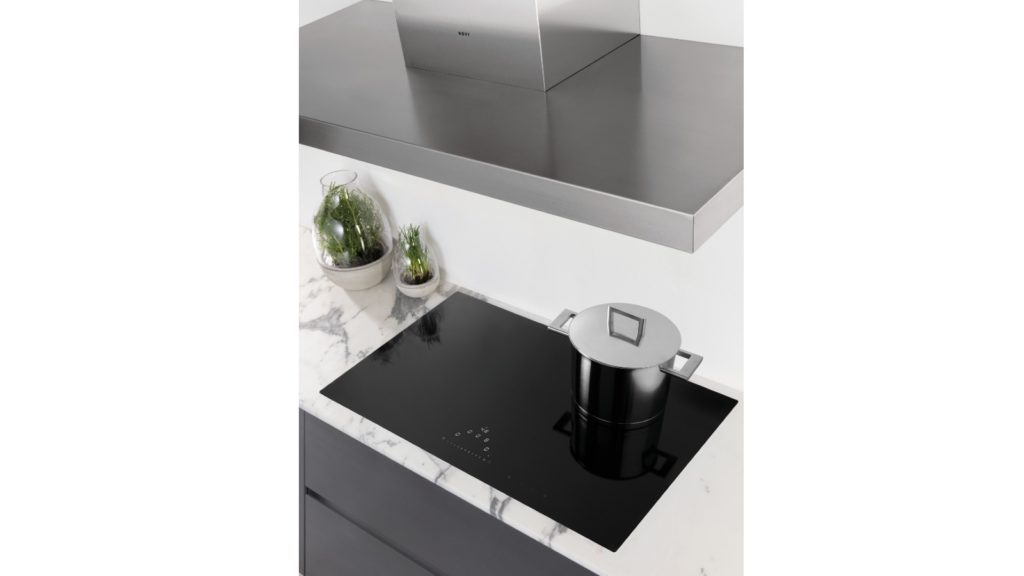 The next step then, surely, must be for greater automation to improve ease of use and optimise power. Perhaps the hob could make suggestions and automatically monitor the cooking of dishes, perhaps using Artificial Intelligence.

Hoover reports connected appliances have established themselves in the laundry sector and predicts this focus to move to cooking appliances.

Owain Harrison of Novy adds: “For retailers, explaining the additional functionality that are included in premium induction hobs will enable them to easily trade up to a higher priced, yet better specified models and this is why, at Novy, we continually focus on providing training for our retail partners.”

However, it’s not just technology which is important to induction hob choice, they are now offered in a variety of aesthetics to suit a wider choice of kitchen schemes.

The black, frameless glass could have held back some sales but they can now come in a choice of coloured glass, combined with gas burners and even suited to more classical schemes.

John Davies of Smeg adds: “Smeg’s induction hob range is available in finishes like silver glass, white and black, and with different controlled trims in its Victoria 50s aesthetic. Individuality and fitting into colour schemes are crucial.”

While Bora introduced a choice of coloured air inlets to personalise its vented hobs. Together, with the minimal, one-piece aesthetic to ease cleaning, induction hobs fit into the ‘improved health and hygiene’ narrative forming an integral part of home design.

But, arguably, the greatest influence on hob sales will be the much publicised spike in energy bills, encouraging a broader church of consumers to consider sustainability in kitchen specification. 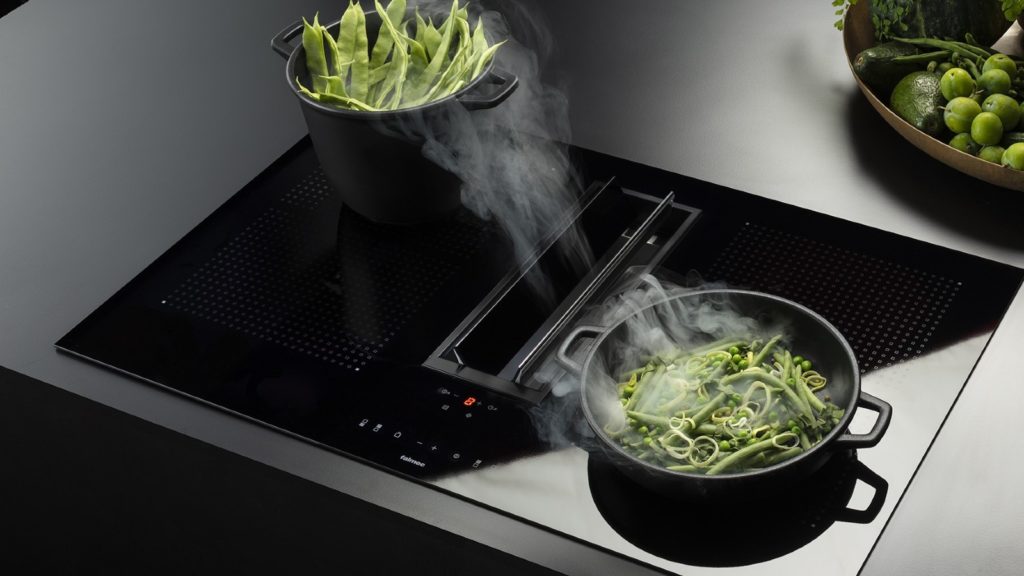 The Quantum hob, from Falmec, is now available in an “easy” version, which incorporates the Filter Carbon.Zeo within the suction part of the extractor, so there is no need for additional ducts and filtering kits

Induction heat is more direct, conducting through the pan and so is not lost heating the outside environment. It means it is quicker to boil, further reducing energy use.

Sean Drumm of Falmec UK comments: “Induction is a clean energy and is very eco-friendly, particularly with electricity, so will continue to be very much in demand by consumers.”

He concludes: “Truth is that consumers and retailers all favour induction for its many benefits in the kitchen, so I have no doubt that this sector will continue to grow exponentially over the next few years.”