Home baking has seen a resurgence, over recent years, possibly from the popularity of TV shows such as Masterchef or Great British Bake-off which introduced viewers to the world of tray bakes. 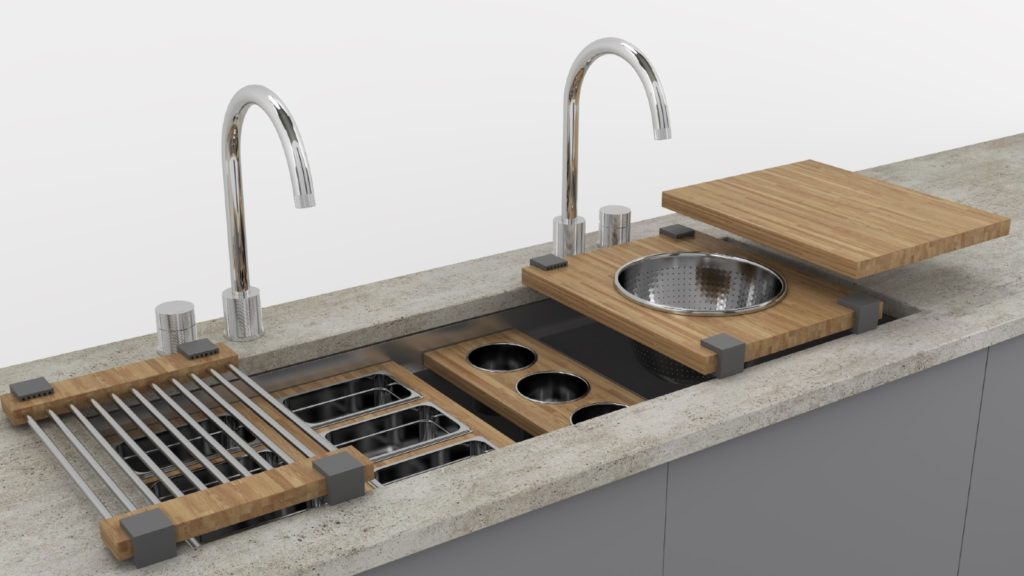 The twin bowl Zenduo10 1100 Options sink, from The 1810 Company, measures 1150mm wide and demonstrates the various accessories available. It is available in flushmounted or inset options

The pandemic saw it escalate further with home cooking becoming a necessity rather than for entertainment.

And there has been a rise in the likes of meal kit companies to help consumers continue to cook from scratch, albeit with added convenience, and providing the benefit of zero waste.

All of which means, has meant a greater focus on the food preparation area of the kitchen – or put simply, the humble sink and mixer tap.

Sales and marketing director at RAK Ceramics Ben Bryden agrees, pointing out: “This has all changed how we use the kitchen, and therefore the requirements of the sink and tap to a certain extent too.” 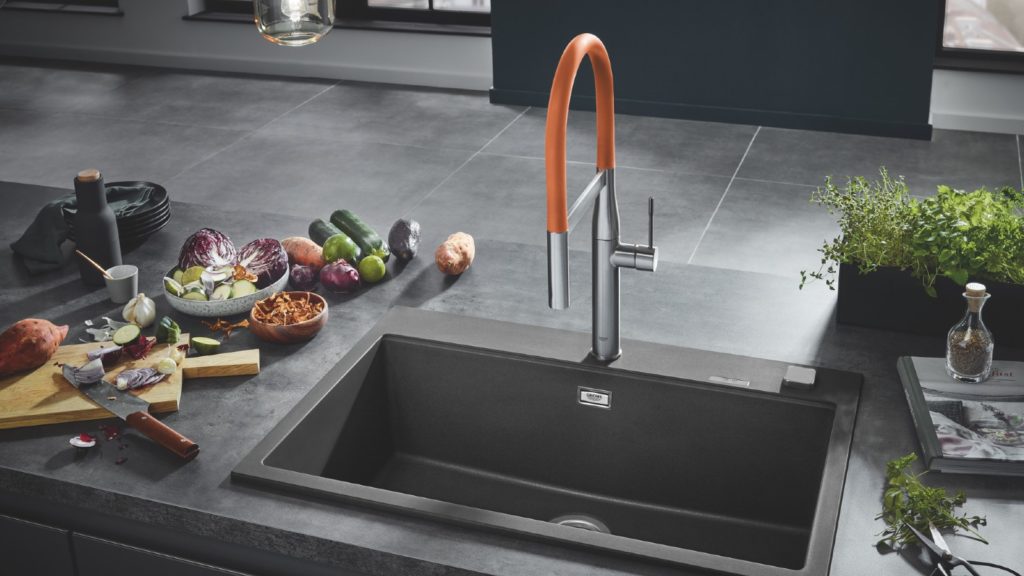 Reflecting the trend for dark composite sinks, Grohe showcases a single bowl model from its K700 series range and complemented by an Essence tap with orange hose

Marketing manager for Abode Leanne Adamson agrees, pointing out: “While the dishwasher may have lightened the load, the sink is still very much needed for a variety of tasks, from rinsing fresh fruit and vegetables to soaking larger pots and pans when home baking and the size and style of the sink has therefore adapted accordingly.”

In fact, kitchen experts say it has seen the sink market separate into small bowl and large-scale sink design.

Ben Bryden of RAK Ceramics explains: “On the one hand,  the kitchen itself is shrinking, especially in new build properties, so worktop space is reduced and sinks need to be quite compact and multi-functional.

“But on the other hand the amount of washing up we’re creating is growing.

This has led to the trend for large, one-bowl sinks for practical tasks such as soaking pots and pans, and the inclusion of a smaller, second sink, perhaps as part of a utility area or integrated into an island unit, for food preparation”

Certainly, the sink has evolved as group sales director at The 1810 Company Daryl Southwell points out: “Present day sees the kitchen sink turning more into an independent workspace rather than what had historically just been somewhere to wash pots and pans or rinse off foodstuffs.”

Of course, this concept of workspace is not solely focused on the sink, but incorporates the mixer tap too. 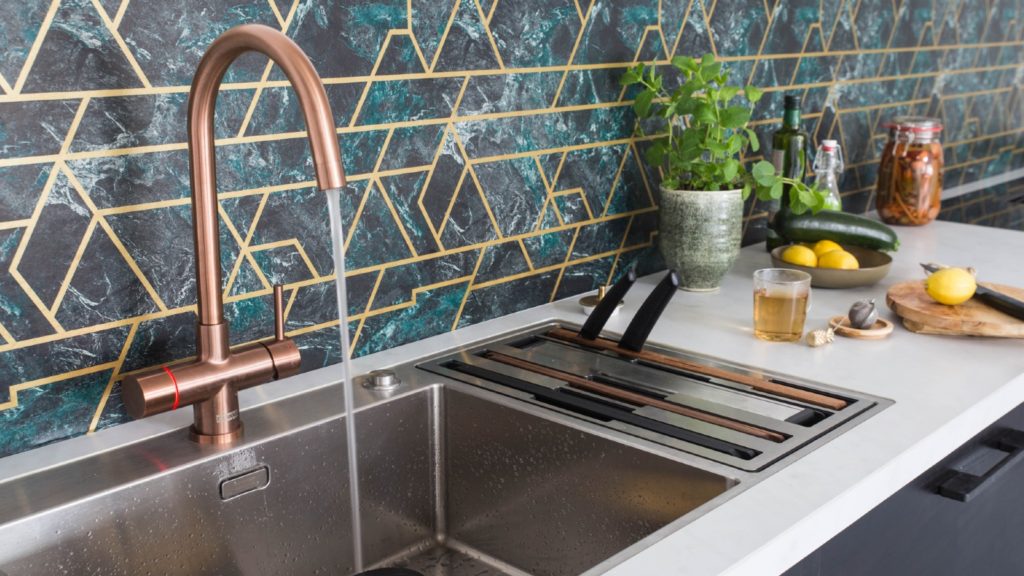 It has continued its evolution to become a food preparation aide and drink centre. Sales and marketing director at Franke UK Jo Sargent expresses: “With more home-centred living, we’ve seen increased demand for taps with added functionality such as boiling water, filtration, hands-free operation and spray hoses, all of which basically make life at home easier and in turn more enjoyable and less of a chore.”

In fact, such has been the popularity of spray taps, Franke has recently added four models to its range, including the Icon Pull Out Double Jet Shower tap boasting a pull-out spray with single or double jet.

And of course, the kitchen tap offering filtered water, boiling water, chilled or sparkling, or perhaps a combination, continues to a be at the forefront of sales for independent kitchen specialists. 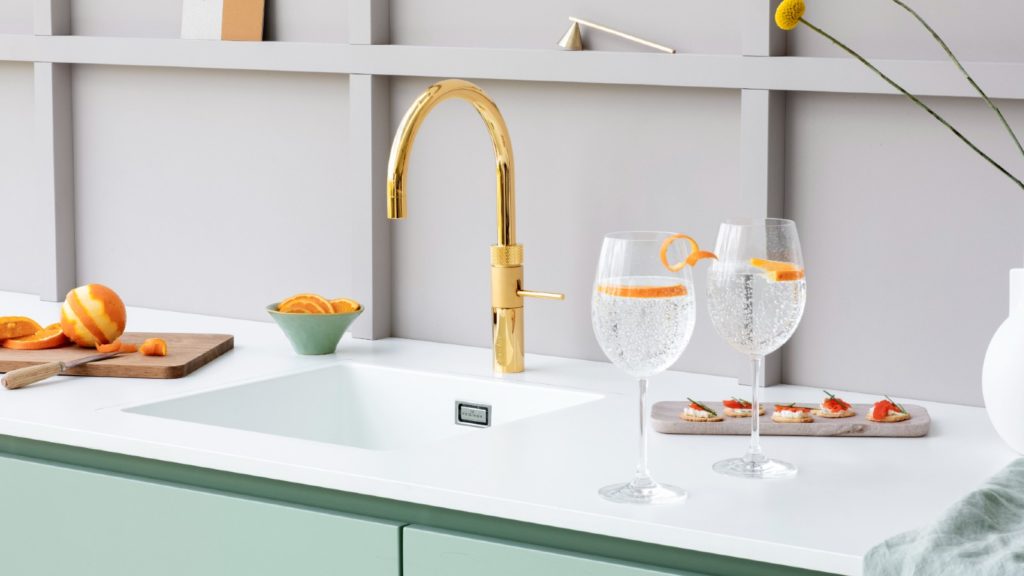 Representing the demand of consumers to want functionality combined with interior fashions, Quooker offers its Fusion boiling water tap in Round and Square models and a choice of colours.

Elina Enqvist-Twomey, leader category UK of LIXIL EMENA and responsible for Grohe, adds: “There is certainly no slowing in demand for multi-functional taps and water systems such as kettle-hot and filtered water taps, which now seem to be becoming a kitchen staple in many modern kitchens.”

And Leanne Adamson concurs but adds: “For taps, while technology in terms of hot water and filter systems continues to offer strong trading-up opportunities, other aspects such as accessibility, ease of use and hygiene are all influencing tap design.

With the pandemic firmly focusing attention on washing and hygiene, it’s no real surprise it’s of concern for kitchen sink and tap design. 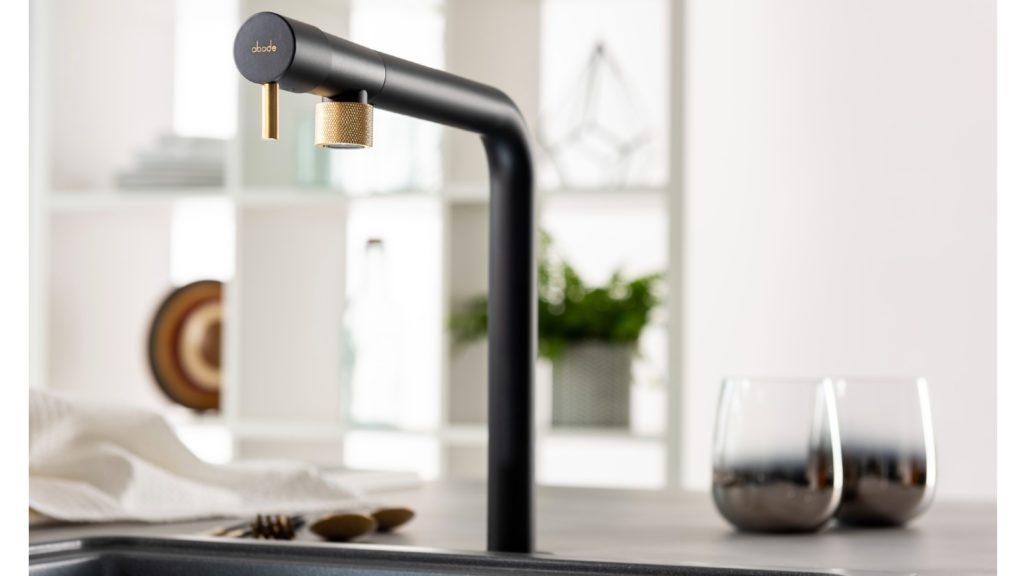 The Agilis mixer from Abode has been designed with ease of use and reduced contact in mind, as the lever can be operated by the back of a hand, wrist or forearm.

It has seen the market embrace granite sinks with antibacterial properties and hands-free taps. These not only prevent cross-contamination of foods but reduces touch points for daily usage, avoiding bacteria or viruses.

Abode has recently introduced the Agilis with a handle that can be directed using the back of a hand, wrist or foreman. While Grohe introduced the SmartControl push-button operation found on its showers to kitchen taps.

Leanne Adamson of Abode explains: “Reducing the need for direct contact with surfaces is something that we know has become popular with consumers since the start of the pandemic and the heightened awareness of good hand hygiene.”

And this is echoed by Elina Enqvist-Twomey of Grohe who says they have found the uptake of its SmartControl kitchen tap range to be “fantastic”.

However, Adamson also points out the move towards touch free doesn’t just satisfy the need for hygiene in the kitchen but also “fits well with the move towards future proofing the kitchen, with taps that offer enhanced accessibility seen as a long-term investment that consumers are willing to pay out for.”

Elina Enqvist-Twomey of Grohe also agrees thata focus on convenience of use will benefit the growing older market or kitchens designed for multi-generations, adding: “Lever-free taps also allow for increased accessibility and improved functionality for those with reduced mobility.

“These models are continuing to evolve and develop as we move towards an aging population with multigenerational households on the rise. Grohe’s kitchen tap range offers many models with innovative features that support accessibility and ease of function, such as Grohe’s Foot Control technology, which can be added as a retrofit feature to a number of Grohe’s pull-out kitchen mixers, allowing the user to control the tap with a touch of their foot.”

And to introduce these concepts to consumers and encourage them to trade up, head of marketing at Blanco UK John Robinson says not only to show them but create some theatre in the showroom. 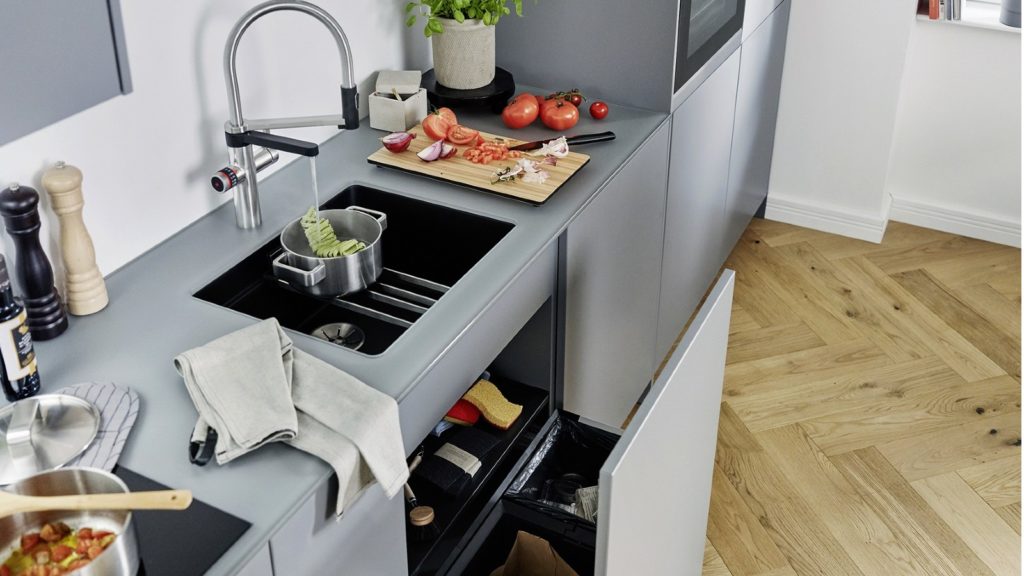 The Blanco Unit combines food preparation, drinking water and cleaning up all in one package. Designers can choose from a mixer tap, sink and waste bin that best meets their requirements.

He not only points to making tea or coffee with a hot tap but also says designers can highlight taps with precision measuring.

He advises: “It’s the same theory with sinks, let them spread curry paste all over a Silgranit sink, let it dry while you talk to them about doors, plinths, extractor fan. Then, simply wash it off and wipe away any marks to show the benefits of trading up.”

Of course, manufacturers have firmly focused on functionality, but this hasn’t been at the expense of interior fashions. Made from ceramic but in a contemporary style, the RL301cw is Reginox’s most popular sink and comes in a choice of bowl configurations, such as 1.5 or single bowl with drainer

In fact, marketing director at Perrin & Rowe and Shaws of Darwen Nigel Palmer comments: “We see a greater appreciation of how the sink and tap design can influence the overall kitchen space, but functionality is still extremely important. It is perhaps more of a balance that it has ever been.”

Jo Sargent from Franke UK continues, explaining consumers expect so much more in terms of sink and tap design: “Hand in hand with functionality, consumers now expect a wide choice of designs, colours and textures that will allow them to add visual interest and individuality to their kitchen design.

“Taps need to be in multiple finishes and granite sinks in an array of colours for real creative scope to be achieved.”

And dark tones will continue to be a key look going forwards for independent kitchen retailers and their customers.

“Matt Black shows no sign of waning, so much so that this year we made it available across seven of our Fragranite and Tectonite sink models and it’s also been introduced across many of our tap designs too”, says Jo Sargent from Franke UK.

And the demand for black is also evident in the Reginox portfolio, as sales and marketing director Dave Mayer comments: “The up-and-coming sink is our Jet Black range. Black is really popular at the moment and we have seen considerable interest in a number of our black products.

“We’re currently reviewing a number of our ranges to extend the offering to include more styles in black. So watch this space!”

In fact, such has been the influence of interior design, that personalisation has even entered the sink market. 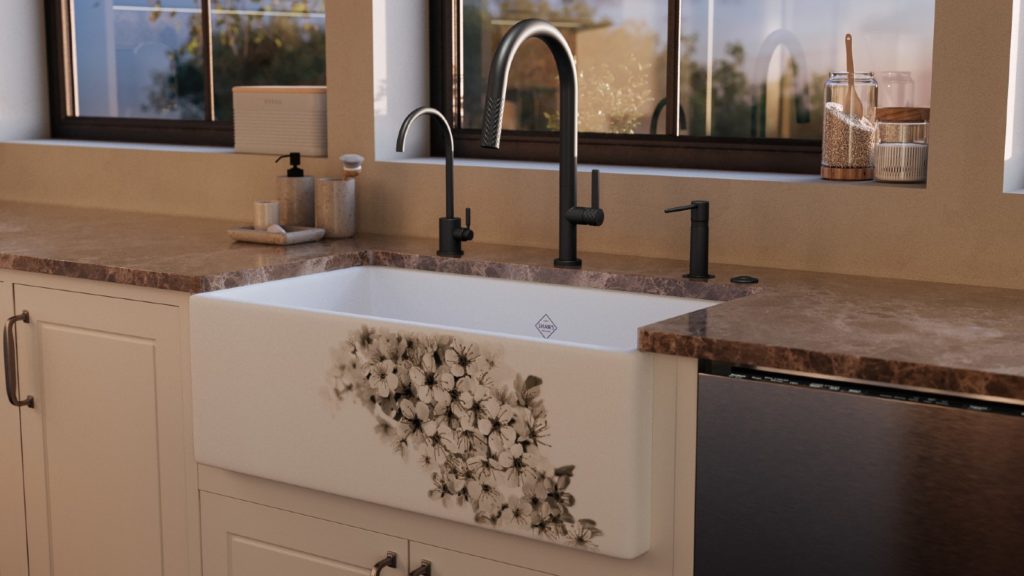 Shaws of Darwen has introduced the Gallery Collection, which features the company’s most popular sinks with exclusively-designed artwork.

Curated collections of sinks and taps offered in a selection of colours, dual tone finishes and even exclusive patterns are now available to kitchen designers and their clients.

Nigel Palmer of Perrin & Rowe and Shaws comments: “Inspired by social media, consumers are looking to create spaces more tailored to their needs and style preferences.

Shaws is meeting this by creating a new range of decorated sinks – seven exclusive designs available across a choice of five different sinks.

“We call this our Gallery Collection, and it offers something entirely unique in the market.”

So what next for sink and taps? As the market continues to evolve – there is no putting the Genie back in the bottle – and these models will continue to gain prominence in design and as part of the overall kitchen budget.

Sales director at AGA Rangemaster James Cunningham says: “The sector has developed considerably over the last couple of years and the general ‘value’ of a sink is more widely reocgnised by consumers and kitchen designers alike, so it is no longer an item that is automatically downgraded should the budget be squeezed.”

And the good news is that industry experts believe the boom time for kitchen sales will continue, thereby further growing the sink and tap maket.