The future is connected appliances

Momentum is building for futuristic products

Connected appliances need only overcome the obstacle of affordability to become a standard feature in our homes, finds Cian Brittle.

The prospect of controlling your entire home through one electronic device is no longer the ridiculous idea it would have been in previous decades.

Something that would have been more believable appearing in a Back to the Future sequel, than if it was fully realised for consumers.

Yet, with the rise of advanced technologies, like voice activation and Artificial Intelligence (AI), connected appliances are becoming increasingly common.

After all, this is a market that is already estimated to be worth around £2bn annually. Jon Brennan, commercial director at Benross Marketing, expects the expansion to continue: “We estimate a forecast of £3.8bn in 2022.”

However, there remains a lingering caution, even with the estimated size of the market. Consumers are hesitant to invest in expensive products that they do not fully understand.

This wariness surrounding connected appliances is something that Catherine Balderson, brand manager at Whirlpool, finds all too prevalent.

She comments: “85% of consumers reveal they would only purchase a smart appliance if they fully understood how it worked.”

It has undoubtedly piqued interest though, as Balderson also estimates that “77% of the UK is ‘aware’ of the connected home.”

The Story So Far

Despite the size of the market, connected appliances are still an emerging market. It’s poignant that, in a recent poll conducted by IronMongery Direct, 84% of tradespeople had never received any training in smart home tech. 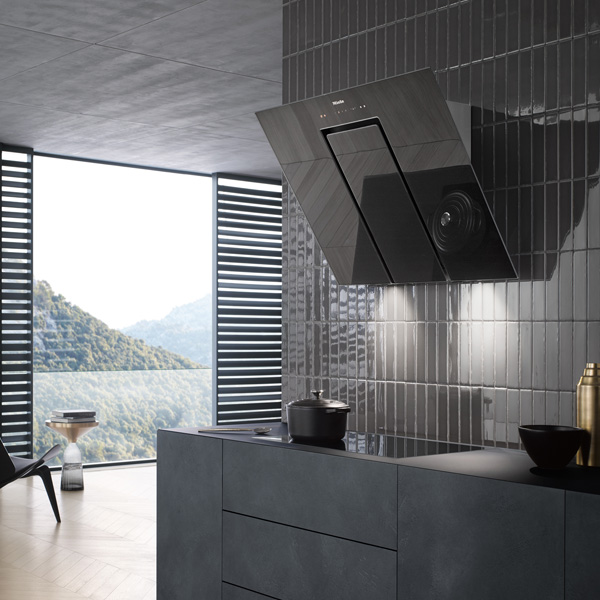 The Miele DA6498W Pure Cooker Hood, which comes in Graphite Grey and Obsidian Black, has an A++ energy rating. It includes Miele’s Con@ctivity 2.0 technology, which enables the hood and a hob to talk to each other

Although it clearly relates to an entirely different industry, it is obvious that the percentage is too high. Smart home tech remains in its infancy across the board.

After all, only 5% of Whirlpool’s washing machines have integrated smart tech (the highest percentage across all of their products), highlighting how low smart tech demand currently stands.

However, in spite of this, there is a general consensus that the market is exceeding expectations. Jon Brennan comments: “I don’t think five years ago we knew enough to predict where we would be.

“However, I’m surprised at the levels of growth I’ve seen in the last two years, and the pace seems to be unrelenting.” 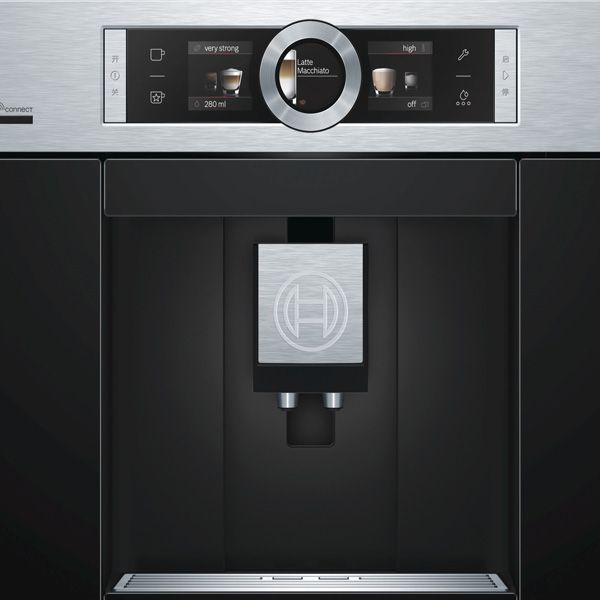 The Bosch CTL636ES6 fully automatic bean-to-cup coffee centre in stainless steel allows users to select coffee type and start operation on the Home Connect app. It features a water tank with a 2.4 litre capacity, and a bean container for up to 500g

This is echoed by Fiona Barker-Scott, brand manager at Falmec UK: “The concept of connected appliances is still relatively new for many. However, the market has embraced this new feature far more than anticipated.”

Although, not everyone agrees; Catherine Balderson has an alternative viewpoint: “The performance of connected appliances is not yet as strong as many people predicted. The price of smart technology in the home currently hinders mass adoption.”

The current generation of smart tech is already fairly advanced, with a focus on controlling appliances through apps on smartphones.

For example, as we covered last year, Whirlpool’s connected washing machine (FSCR 12441) and matching tumble dryer (HSCX 10441) “communicate with each other and can be controlled from anywhere using the 6th Sense Live app,” according to Catherine Balderson.

The Whirlpool connected washing machine (FSCR 12441) and matching tumble dryer (HSCX 10441) communicate with each other and can be controlled from anywhere using the 6th Sense Live app. The app allows the user to schedule programmes within a 48-hour time-frame

Another example of apps being used to benefit the consumer is outlined by Steve Macdonald, business director of the Freestanding Division at Hoover Candy UK.

He comments: “The majority of connected appliances have consistent features such as diagnostics reporting.

“This is available straight to the user’s phone, as well as energy consumption monitoring – perfect for keeping control of household bills.”

“By enabling a connection with the alarm function on my phone, the coffee machine will switch on when my alarm goes off first thing.

“If I am in a rush, as I jump in the car and drive off, the coffee machine and the lights react to my absence and turn themselves off.”

The Home Connect fridge-freezers are similarly advanced, as Kington explains: “Cameras take pictures of the inside of the fridge, which you can then view on your Home Connect app.” 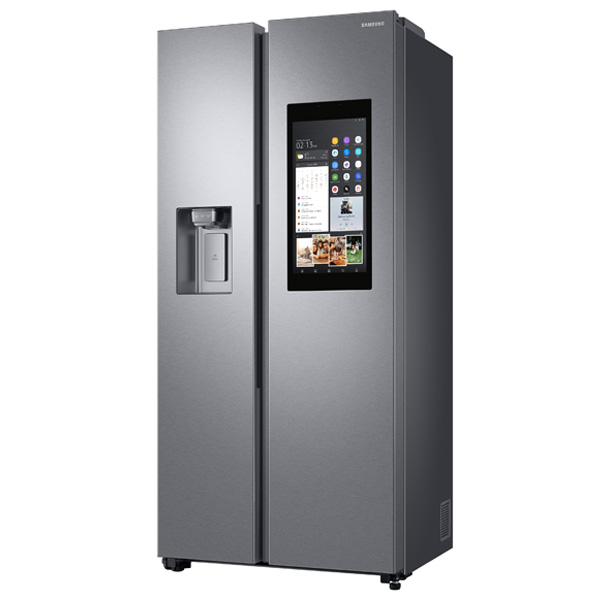 Using in-built cameras, Samsung’s Family Hub 3.0 Fridge Freezer takes pictures of the inside of your fridge so users can view its contents on their phone. It also enables users to track expiry dates, and suggests recipes based on the food in the fridge

This feature seems relatively widespread already, with Samsung’s Family Hub 3.0 Fridge Freezer able to do likewise, but alongside the more advanced feature of voice control.

Caution should be exercised, however, as with the rise of connected appliances, an increasing number of products will utilise an app in order to be operated.

Jon Brennan voices his concern over the impending saturation, and what he sees as the solution. He said: “I often say that I ‘need an app for my apps’, and I think that’s where Alexa and Google have really helped, as they now operate as a single control hub for many consumer devices.”

Voice of the Future

The voice control feature on the Samsung fridge freezer is a sign of where the market is heading in the coming years.

With the steady adoption of devices like Alexa and Google, controlling your products by talking to them is the market’s next target. 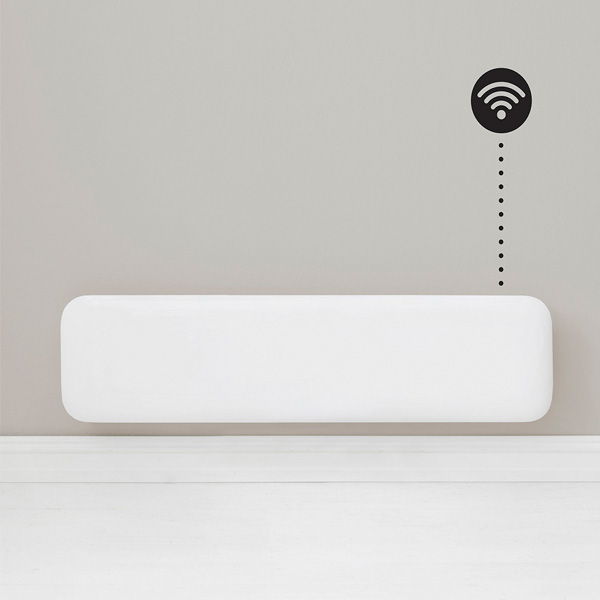 The Millheat app can control its Wi-Fi operated radiators, such as the Mill NE800L. It includes an ‘open window’ function, which automatically turns off the heater if a sudden fall in temperature is registered

Donald Shepherd, marketing director at Beko, believes that “from 2019, voice control tech will be available across the majority of our brand.”

This is reiterated by Steve Macdonald: “Voice activation is something we’re continually exploring for Hoover products.”

After all, according to Euromonitor International, 66% of consumers have access to a digital personal assistant, via a smartphone, and it is expected that voice-controlled digital assistants will enhance consumer’s interactions and experiences.

In addition to this anticipated direction in the market, other developments could include “the benefits of connectability, in terms of appliances that can browse the internet and access different websites, like the Hoover Vision oven,” according to Steve Macdonald. 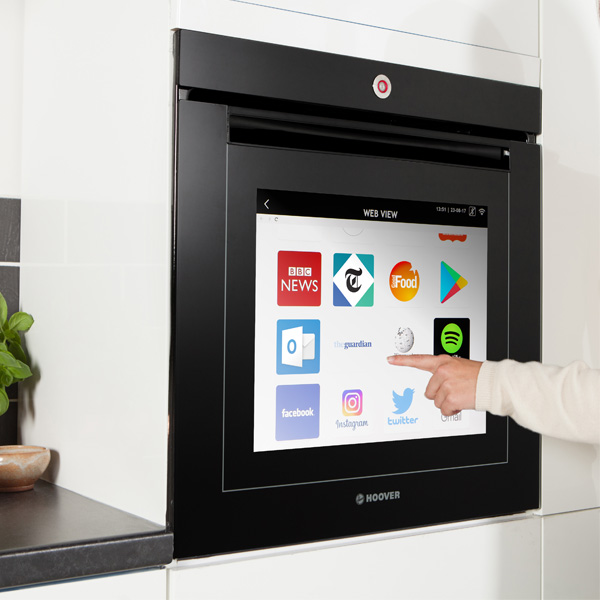 The Hoover Vision Oven has a touch screen control on the door, with Wi-Fi and Bluetooth connectivity, and website access. The 80-litre oven has 10 cooking functions. Hoover also recently announced a range of AI appliances

However, despite the promised innovation, the market is still facing problems that are holding it back.

Catherine Balderson believes that the market is faced with the issue of compatibility, and proposes that “with the introduction at lower price points in the market, there will indeed by mainstream adoption of connected appliances.”

She also maintains that “a barrier to the mainstream adoption of connected appliances is price, with over a third of respondents in a recent study quoting it as an issue.”

Once the issue of price is overcome, the growth for this market has serious potential. Steve Macdonald comments: “We fully expect connected appliances to increase over the next two years because connectivity is becoming more of a standard feature across all appliances, especially in laundry and dishwashing models.”

This sentiment is echoed by Jon Brennan: “I think in the next two years we will have more devices that are connected than not.”

“Utilise live displays wherever possible,” says Fiona Barker-Scott. You must engage the consumer, no matter how advanced connected appliances become.

There is a reluctance surrounding consumers currently, so it is vitally important to inform and educate them.

If a consumer can be shown how a product operates in person, and the benefits of using smart tech are outlined, then they are more likely to be interested in purchasing a product.

Daniel Dewey, product manager for Built-in Appliances at Hoover Candy UK, emphasises this idea: “Retailers can help consumers explore and feel confident using the technology by discussing and demonstrating the product in the showroom.”

Steve Macdonald follows a similar idea: “Relating the functionality that connected appliances offer to an individual’s lifestyle can also help put the benefits into context for consumers.” 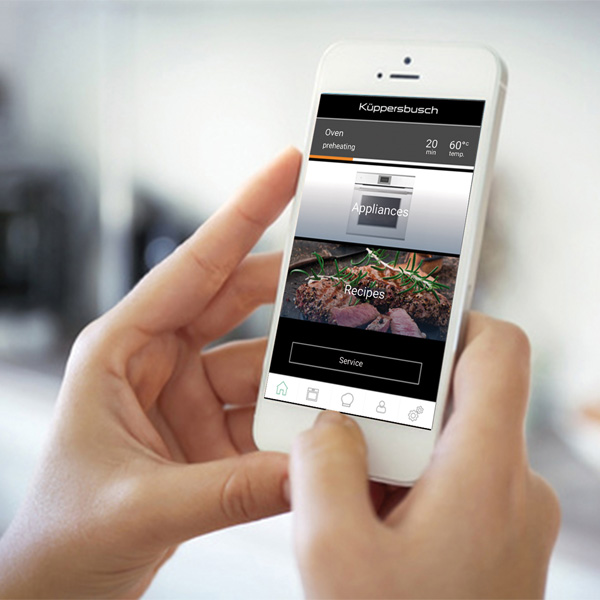 The Wi-Fi enabled Profession+ Oven collection can be controlled from anywhere using the K-Connect app. The app includes a search function to take the user to a selection of recipes which can be sent to the oven

Another to advocate the importance of showing consumers what to do is Adam Norris, product manager of Built-in Appliances at BSH Home Appliances.

He comments: “One of the best ways for retailers to promote Home Connect to their customers is by demonstrating the Easy Start function in the Home Connect app.”

Further to this, Catherine Balderson highlights who you should be targeting: “The key target are those who will become home owners in the years to come, and have grown up with a smart phone, apps and Wi-Fi.

“They will not accept or expect anything less than controlling their appliances via their phone or tablet.”

This is especially important in light of Jon Brennan’s comment: “80% of consumers own at least one device, and 35% have more than three.”

Whilst all of these advancements can only be good for the industry, it is important to introduce innovations sensibly.

Balderson goes as far as to claim that volume and value have soared by “518% and 485% respectively.” 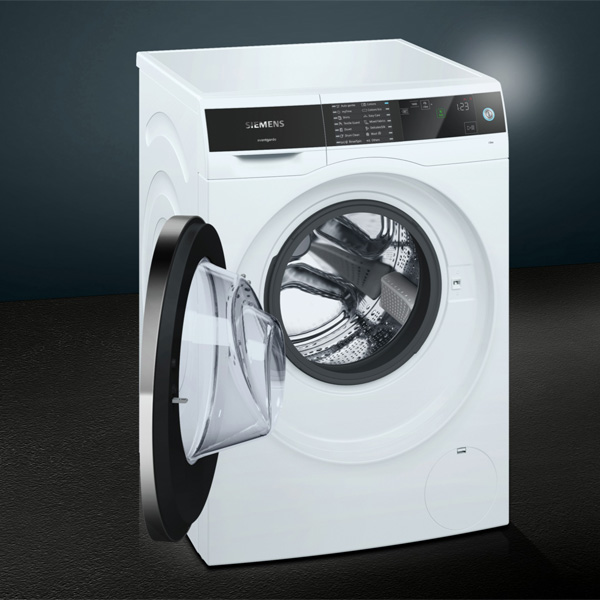 With a 9kg capacity, and maximum spin speed of 140rpm, the Siemens WM4UH640GB avant-garde washing machine features the i-Dos automatic dosing system. This measures the correct amount of detergent according to the size and soiling of the load

Cooking, however, does not appear conducive to the introduction of smart tech. Jon Brennan has noted: “Ovens are possibly one area where consumers are reluctant to operate remotely.”

Likewise, Catherine Balderson adds: “It is likely that a connected gas hob would create a challenge, with little benefit. Safety could also be an issue.”

There is rapid innovation in the current market, and with Jon Brennan’s prediction that “AI will start to play a greater role in operating appliances, with little/no input from the consumer,” connected appliances show no signs of slowing down.

Most wanted from November issue

Most Wanted products from June