The rise of the integral extractor

Will the passion for hobs with integral downdrafts be all-consuming or is there still room for separate extractor sales? Philippa Turrell takes a look at the evidence

The headline story in extraction has most recently been the proliferation of induction hobs featuring integral extraction. 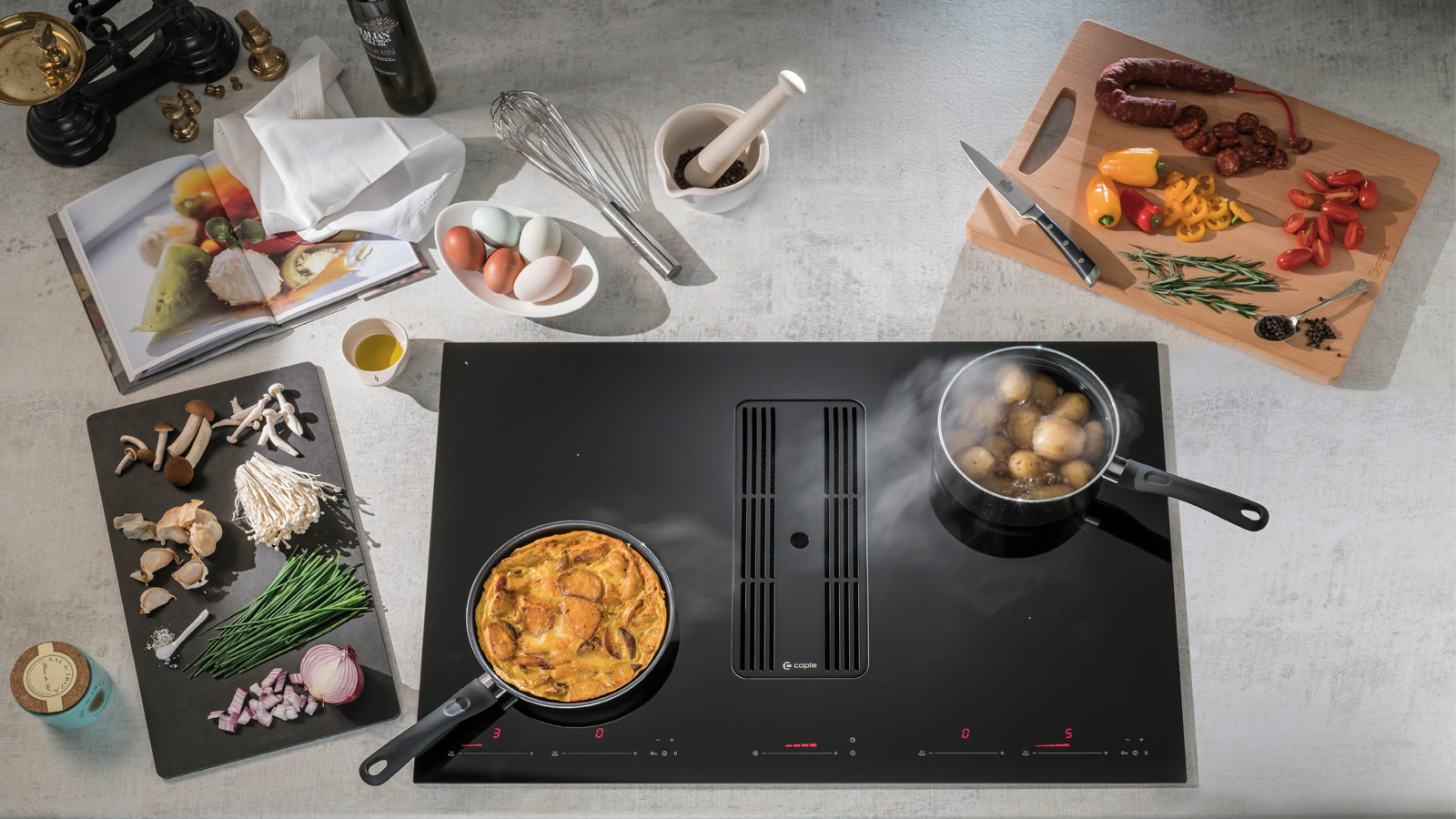 The DD940BK induction downdraft from Caple features plasma technology, as well as a charcoal filter, which reportedly eradicates 95% of odours. It has an extraction rate of 650m³/h and in integrated into an induction hob with 10 power levels

and Belgium extractor manufacturer Novy launched into the UK market with its combined models at the show.

And this trend was also mirrored in the FTK – Technology for the Kitchen event, part of Eurocucina, in Milan. Country manager of Novy Owain Harrison comments: “At kbb Birmingham and, more recently, Eurocucina FTK in Milan, there was a significant shift toward the combination hob and extractor, with most premium cooking brands featuring at least one model in their stable.” 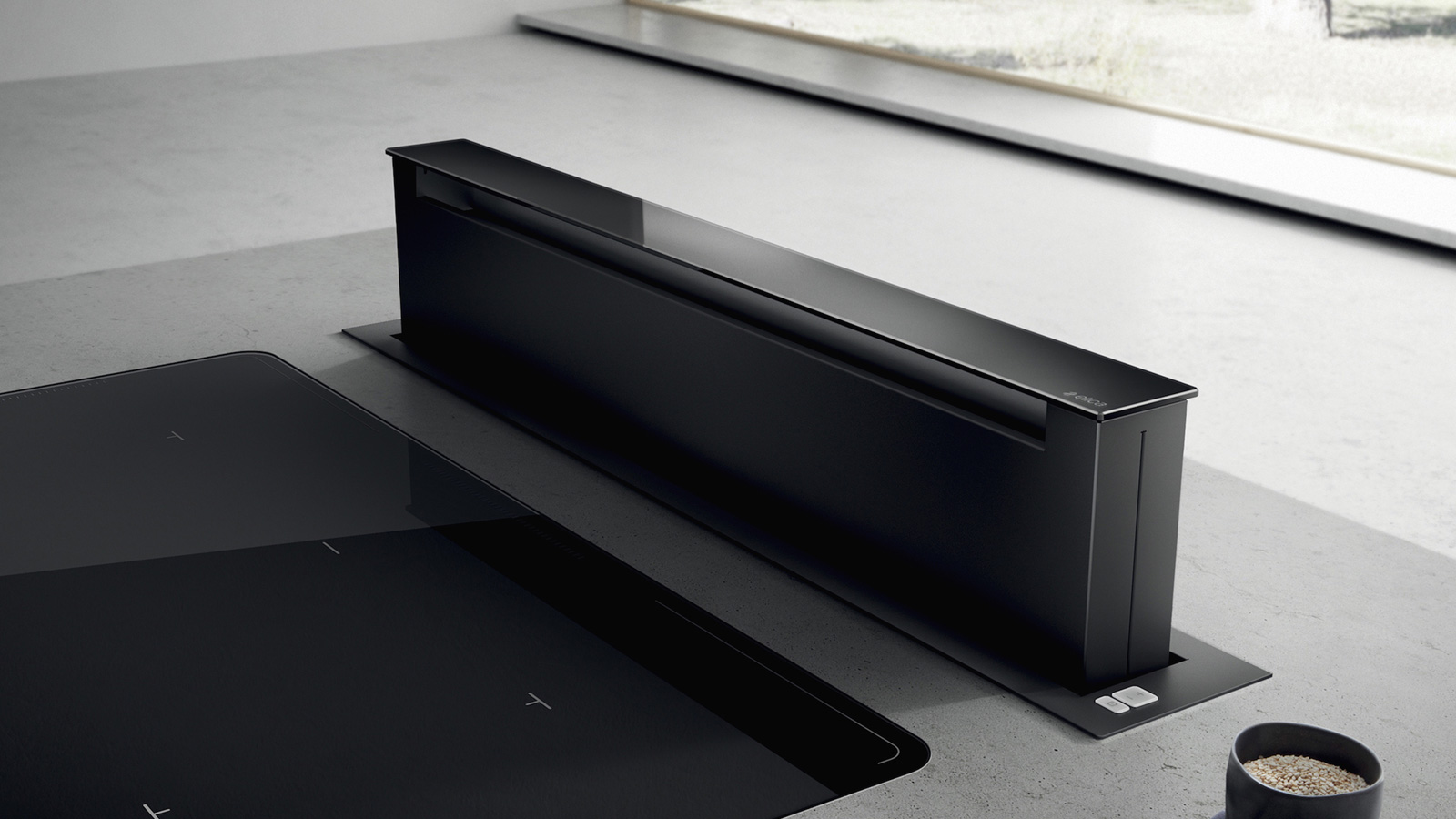 According to Elica, Pandora is the first downdraft to offer a full black trim to blend with the hob. Measuring 760mm, it comes with the choice of an integrated motor or remote motor, with extraction rates of 670m³/h and up to 710m³/h, respectively

In fact, Elica introduced six extractor hobs at Eurocucina FTK, “four of which will be available within a few months and two are for 2019,” explains Howard Bogod, managing director of the UK distributor for Elica, DR Kitchen Appliances.

Such has been the interest in the combination hob and hood extractor, that industry experts believe it will become more commonplace in kitchen design. 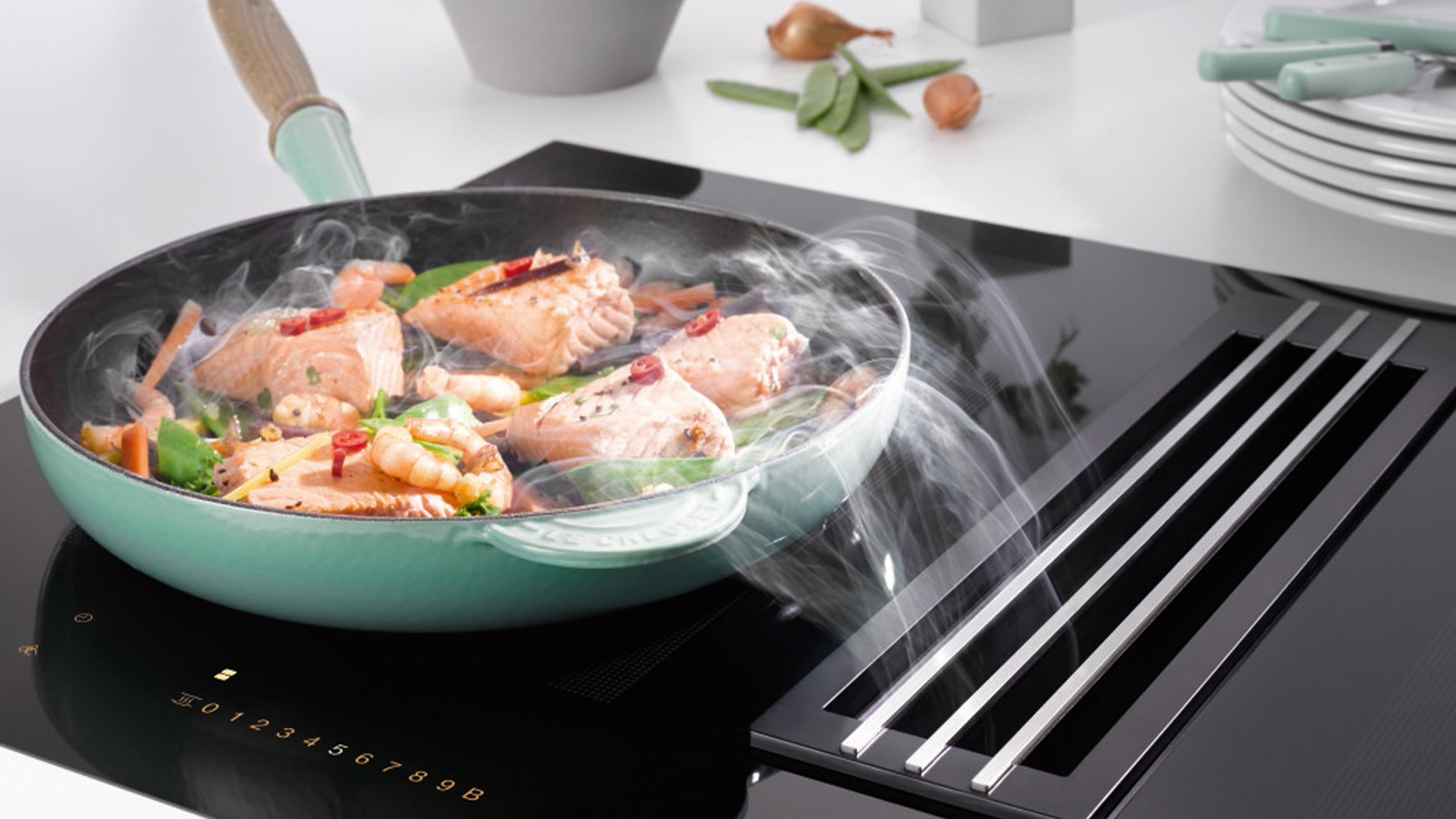 The two-in-one 7774Fl Induction Hob with Integrated Extractor from Miele can be ducted or used in re-circulation model. It boasts a 10-ply stainless steel metal grease filter and it’s Con@ctivity 2.0 features means it determines the correct fan setting and can adjust extraction rates during the cooking process

Owain Harrison of Novy emphatically states “the market is destined to grow further and will doubtless enter the mainstream”, adding “combination models may drastically affect the sales of standalone downdraft extractors in the future.”

But while the continuing passion for minimalist home interiors offers a wider appeal for the combination hood and hob extractor, communications manager at Franke Jeanette Ward states: “Unless there are significant changes in the cost base for integrated hob extractors, the separate hood is unlikely to die out.” 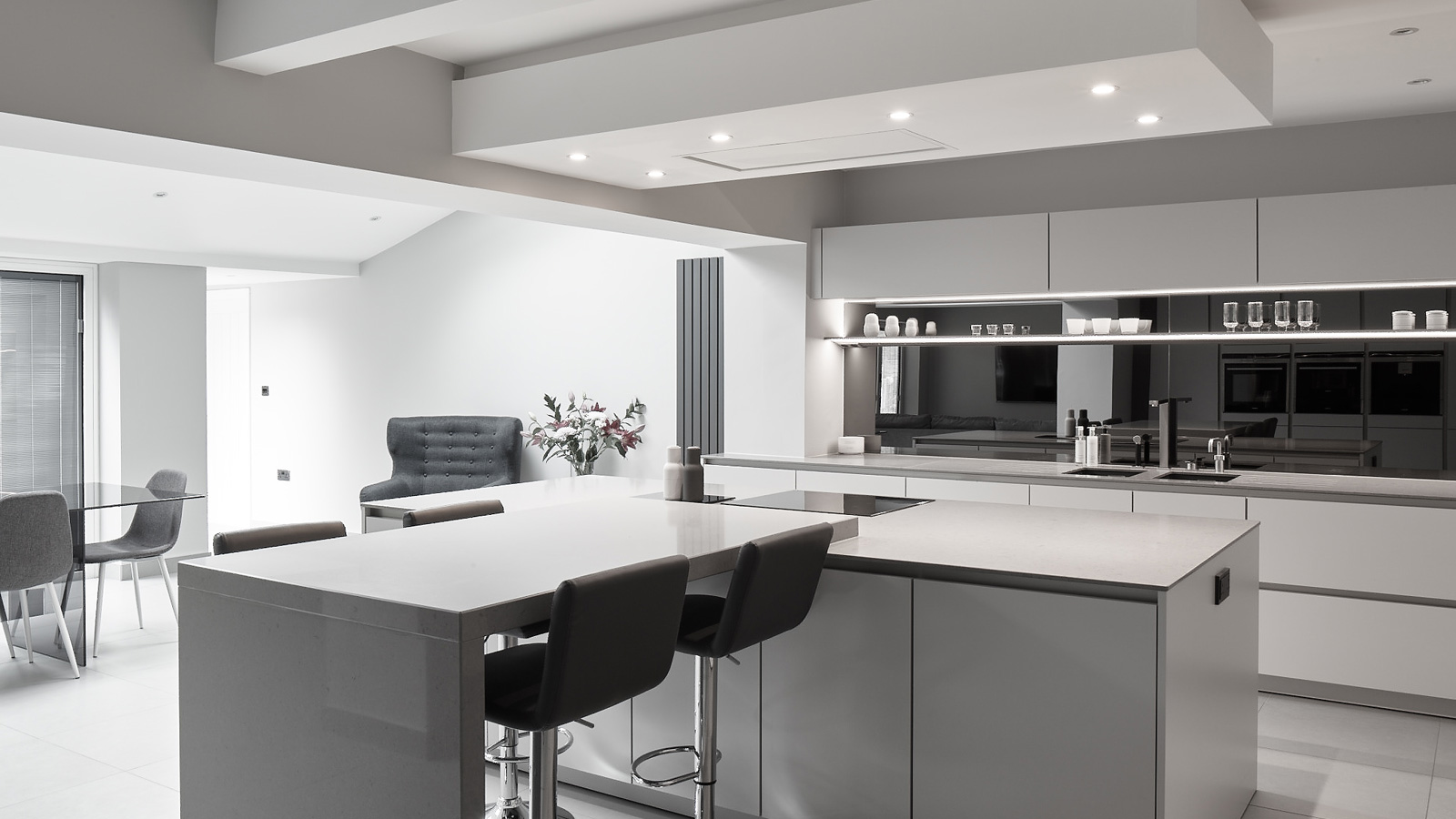 Westin’s Stratus Air ceiling extraction is designed in response to demand for invisible extraction which disappears into the kitchen architecture. It comes in white, so not to distract from the ceiling, and has an internal 800m³/h model; developed in collaboration with kitchen designers Grid Thirteen

And despite Westin recently launching an integrated hob extractor, sales and marketing manager Ann Onions believes they will not be all-consuming, leaving room for separate extractor sales: “Sales are growing rapidly for the Harmony from Westin on the back of excellent demonstrations of the product at kbb in Birmingham.

“It is unlikely to cause the death of the separate hood as this will always be required for range-cookers and the continued requirement for focal hoods making a statement.”

In fact, it is not even likely that combination hob and hood or even separate downdrafts, will be responsible for all future concealed extraction sales, as both of these appliances share the similar requirement of space.

Jeannette Ward of Franke explains: “It is important to ensure the kitchen is large enough, and with enough storage space to make the loss of the under cabinet space inconsequential for the consumer.” 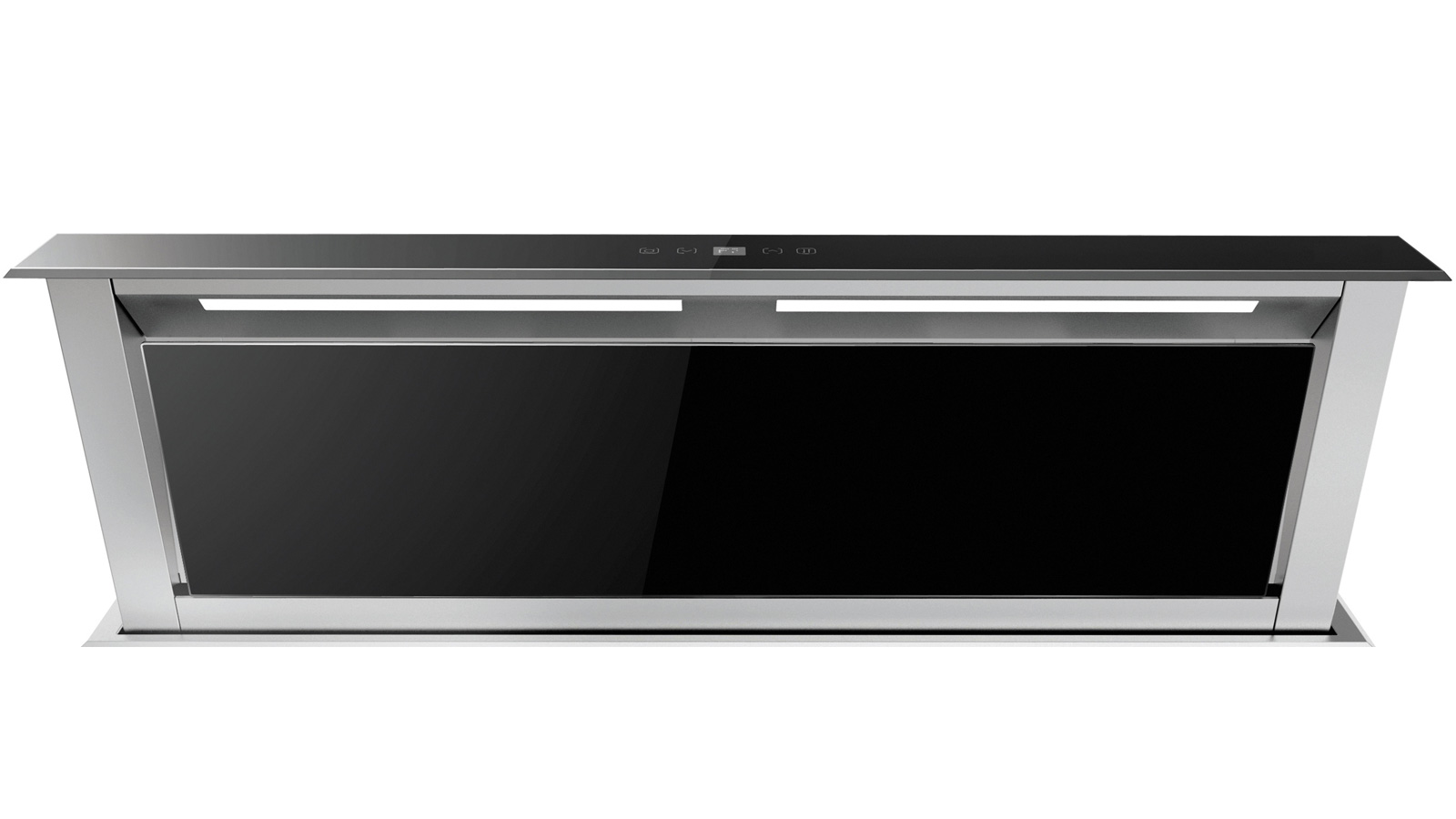 Forming part of the Prima+ appliance collection from PJH is the downdraft hood which measures 900mm wide. Operated by touch control, it boasts four speed settings, plus a booster function, and has an extraction rate of 760m³/h

However, it should be pointed out there are also models that can reduce the amount of space required for downdraft models, with their motors sited a distance from the source of extraction.

“The new downdraft models from BSH offer flexible installation solutions, such as being able to remotely mount the motor up to 3m away”, says product manager of ventilation for BSH, Sean Liddle.

He explains why: “This installation option is particularly useful if the customer needs full drawer packs beneath their hob, where the usual downdraft motor would be fitted.”

Luckily for designers, there is a raft of concealed extraction, such as those built-under wall cabinets through to ceiling options which widens the choice of discreet removal of steam and cooking odours.

At the top-end of the market, ceiling extraction is still proving to be a popular choice for designers and their customers who want clear sight lines across the kitchen. 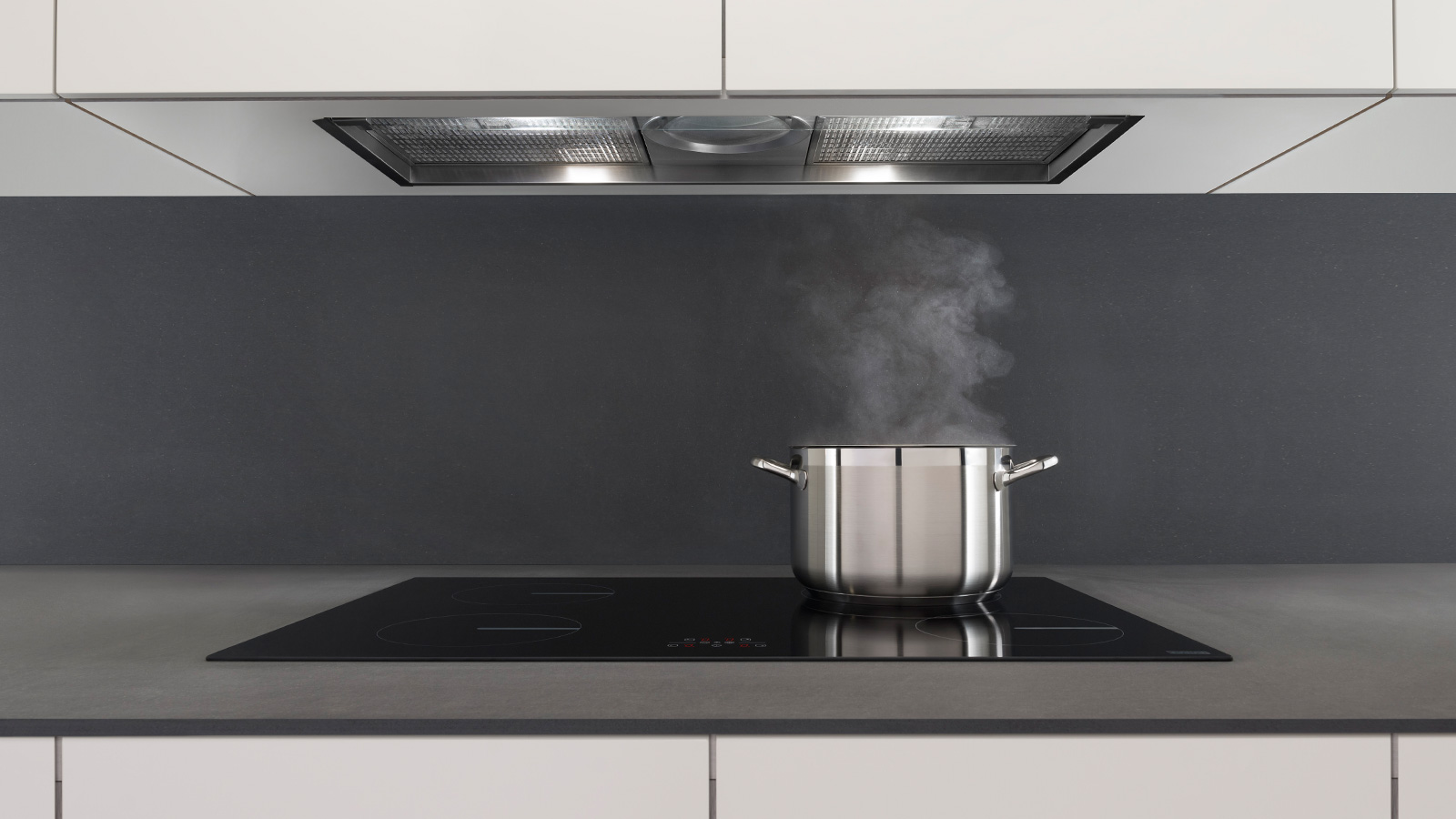 The Atmos Hood from Franke, which is installed in wall cabinetry, has been designed to counter condensation from induction hobs. It is available in three sizes, 600, 900 and 1200mm wide and has three speeds plus an intensive setting

Ann Onions of Westin says built-in ceiling hoods – its Stratus range – are the most popular. She explains why: “It fits flush into the ceiling, whereas some ceiling hoods have a slight lip below the ceiling.

“It is painted white which is the colour of most ceilings and it has no lights, meaning any pattern of ceiling lights is not disrupted. It has the added benefit of not just being concealed but virtually invisible.”

And yet, there are industry experts who suggest dynamic lighting is going to become more important in the design of built-in ceiling extraction, catering for task and mood lighting.

Measuring 600mm, the HNE51210 integrated hood from Beko has three speeds with an extraction rate of 210m³/h. It is available with optional carbon filters if it cannot be ducted to an outside wall

And this is reflected in the Elica portfolio, as Howard Bogod adds: “A critical feature is lighting. Nearly all kitchens now have LED lighting but there is no single temperature specification.

“So many of the latest Elica hoods, including the new ceiling hoods, feature ‘Tune White’, so you can set the temperature at any point between 2500K and 5000K.”

Of course, these developments are at the top-end of the market, but for designers working in the mid or lower markets, concealed extraction is still an option. 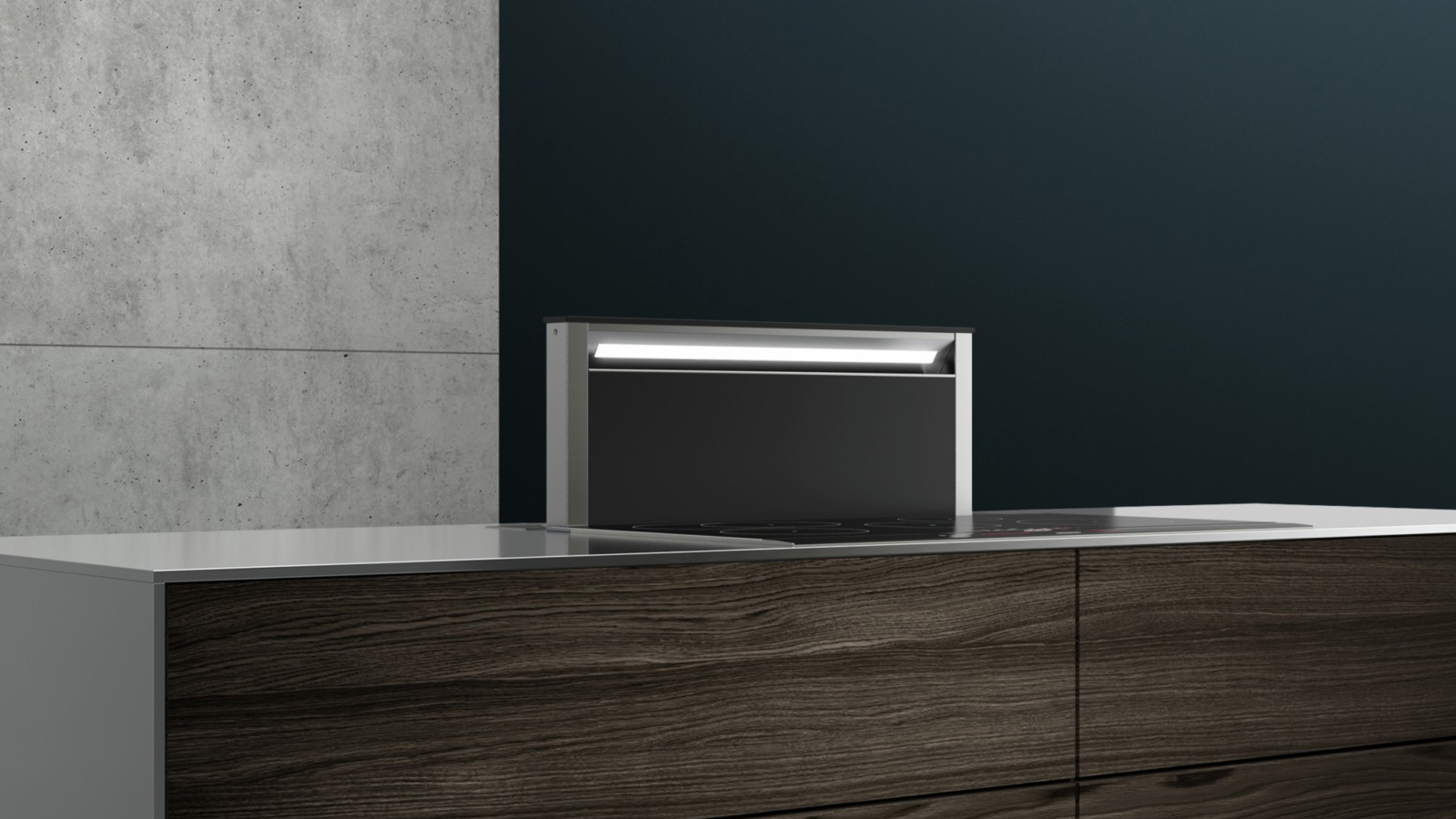 The Siemens LD97DBM60B downdraft Air extractor has three speeds, plus two intensive settings, and an extraction rate of 530 m³/h in normal use. It operates at 62dB, with a motor that can sited up to 3m away from the source

In fact, Jeannette Ward points out: “The most popular type of concealed extraction is built under or built-in, owing to the high number of galley-type kitchens, where space is more of a premium.”

And Nigel Jacobs, managing director of Euroline, which is the UK importer of Falmec, says this is reflected in his sales.

Alongside a combined panoramic hob system, he says one of his most popular models is “The Gruppo Incasso, a built-in extractor system that sits within the overhead kitchen furniture, directly above the cooking station.” 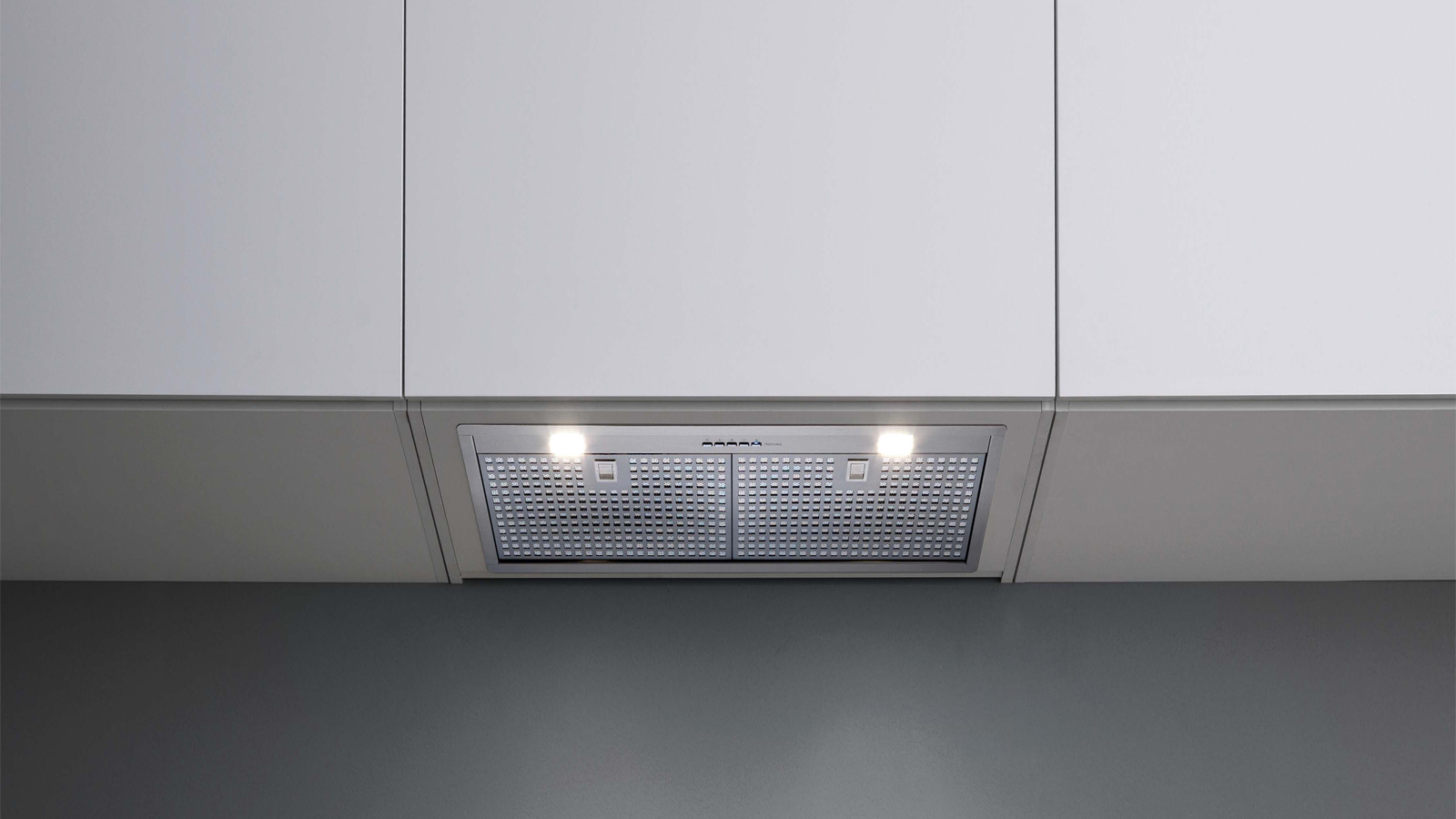 Available in the UK exclusively through Euroline is the Gruppo Incasso, a built-in extractor that sits in overhead kitchen furniture. Falmec has integrated it into three of its extractor collections, including Design, Professional and NRS, which is QuietMark approved, due to high demand

However, as with the downdraft or the all-in-one hob and extractor, there is a drawback to the built-under model, as Jeannette Ward explains: “built-in hoods, by their very nature, may only cover part of a hob, so it is important to consider the extraction required in relation to the size of the hob to make sure it’s sufficient.”

However, it should be pointed out this is a key requirement of all extractor, to make sure it meets the needs of the consumer – including their cookery style.

Ann Onion adds: “The main consideration for all extraction, not just concealed, is the performance requirements of the cook in the kitchen they are designing.

“Many beautiful kitchens can be ruined by a poor performing extractor and a kitchen full of fumes and smells.”

Not seen nor heard

While the performance of the hood remains integral to sales, so does the requirement for it to operate at low decibel levels. 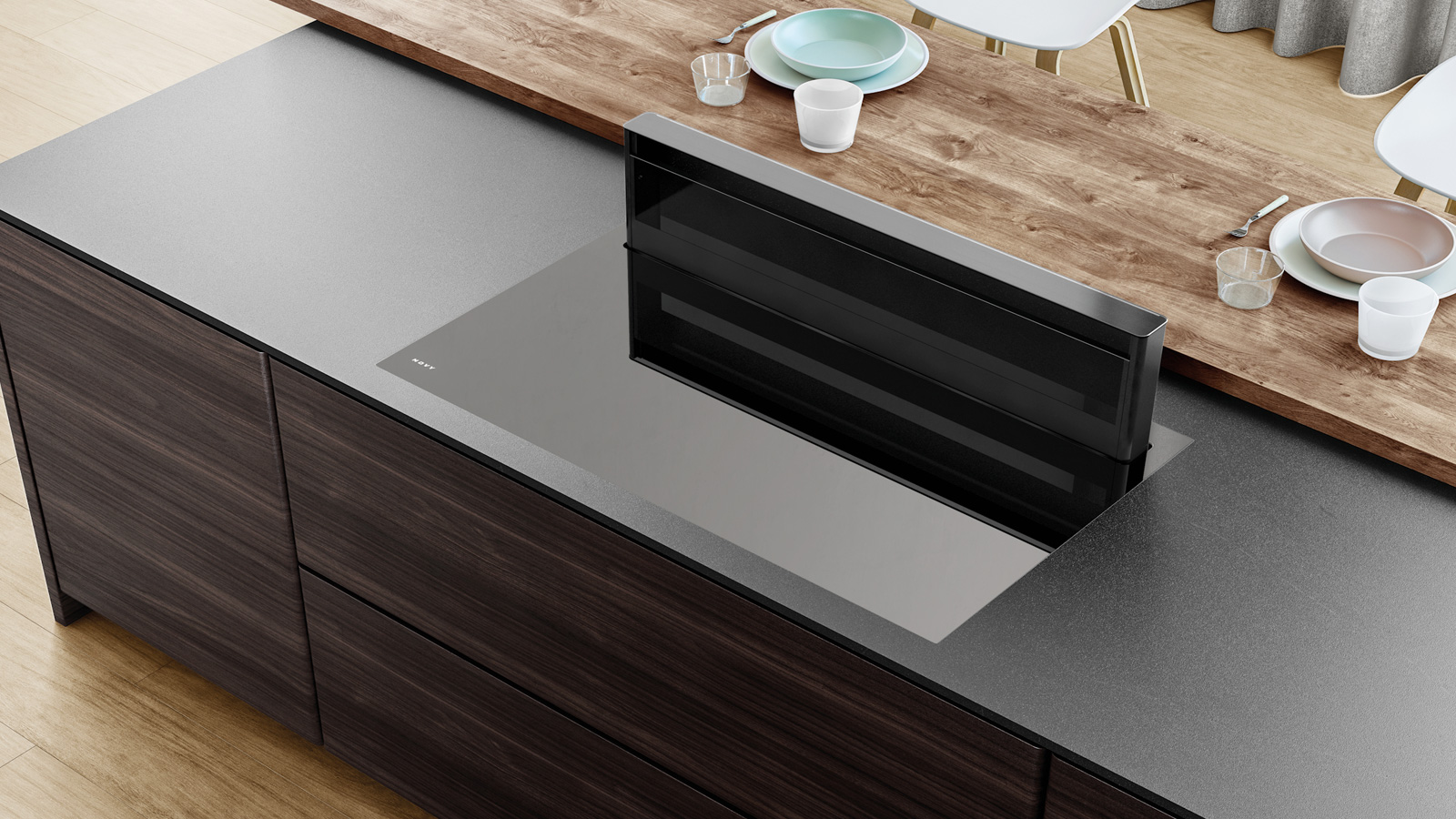 Winner of a Red Dot Award is the Panorama combination induction hob and downdraft extractor from Novy, which rises up to three levels of 100, 200 and 300mm, plus an auto-function to sense the optimum height. It has five speeds, plus three intensive settings, and a maximum air flow of 722.8m³/h

But going forwards, automated operation seems to be growing alongside this, from sensor technology, through to greater use of connected hood and hob technology.

Ward explains: “A future area is the development of efficient sensors to automate extraction by detecting changes in moisture and heat through a sensor and automatically adjusting the extraction level required.”

Meanwhile, Nigel Jacobs of Euroline picks up on the trend for connected living, when he says: “Connectivity between the hob and extractor is also continuing to pick up traction as users become more familiar and comfortable with the concept of the smart home.” 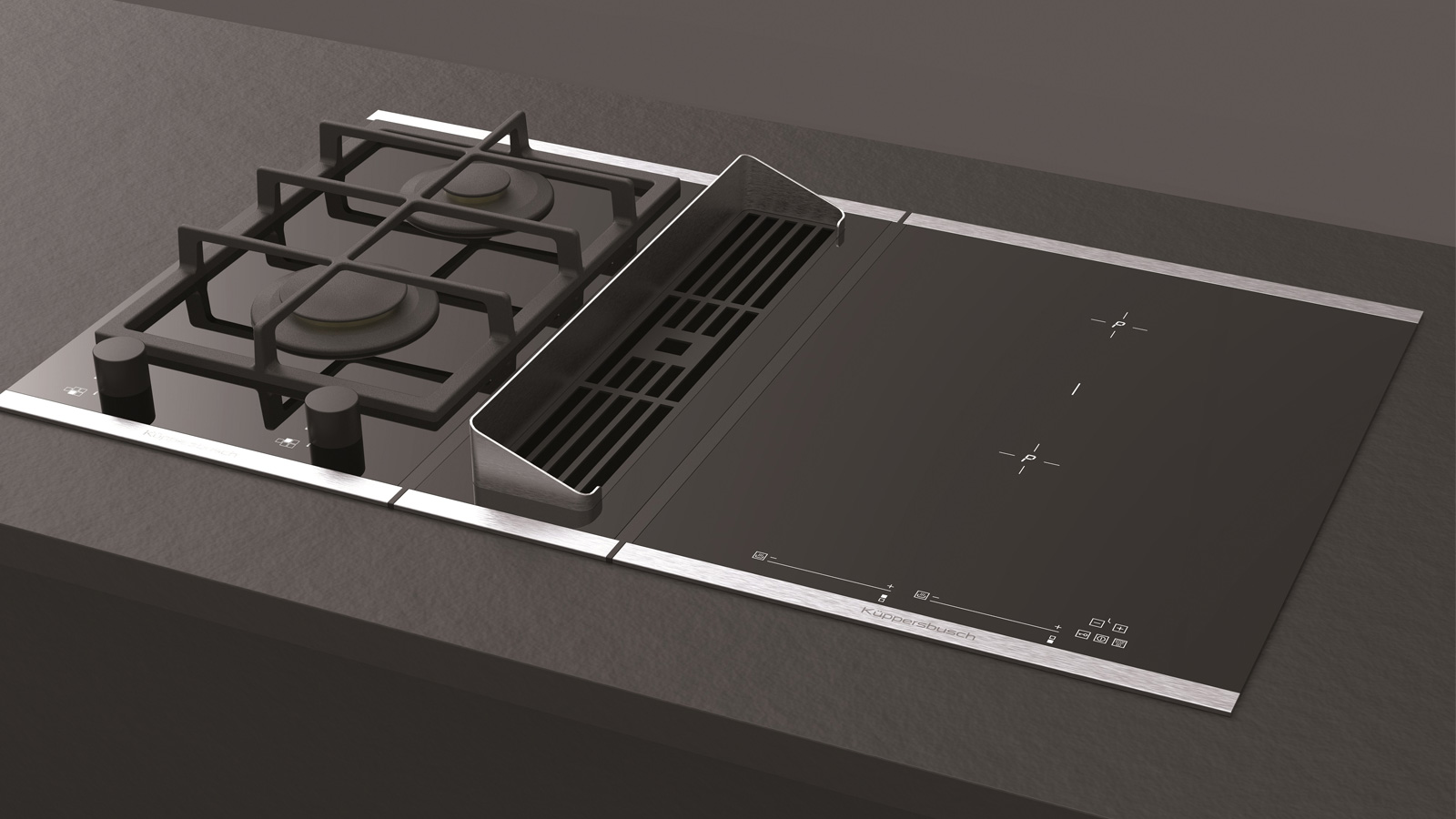 Part of its Varioline cooking appliances is the Premium+ Collection GKS3820 with concealed downdraft extractor featuring a gas deflector shield. It boasts plasma technology which is claimed to last up to 15 years

And Owain Harrison believes connectivity will even open the door to voice activation, as he predicts: “By the end of 2019, selected models will be app-enabled and controlled by voice activation via various hubs including Google Home, Amazon Echo and Siri. This is the way the market is moving.”

So while designers may be passionate about the combined hob and extractor, it isn’t all over for separate downdraft, ceiling or built-under extraction sale.

And, in fact, consumers even still have an enduring love for the focal extractor. Jeannette Ward adds: “With the rise of the island kitchen, focal hoods have become increasingly important. So there are some competing forces at work in the hoods market currently.”

What is key then is whether the extractor can be fitted into the scheme, performs correctly at the appropriate noise level and how users want to engage with their appliance.

Then love will truly be in the air for all types of extraction.