Abode: “It’s time to be a disrupter again”

Believing Brexit may benefit business, managing director of Abode Darren Holliday still has fresh thinking and refutes any suggestion he has joined the old guard 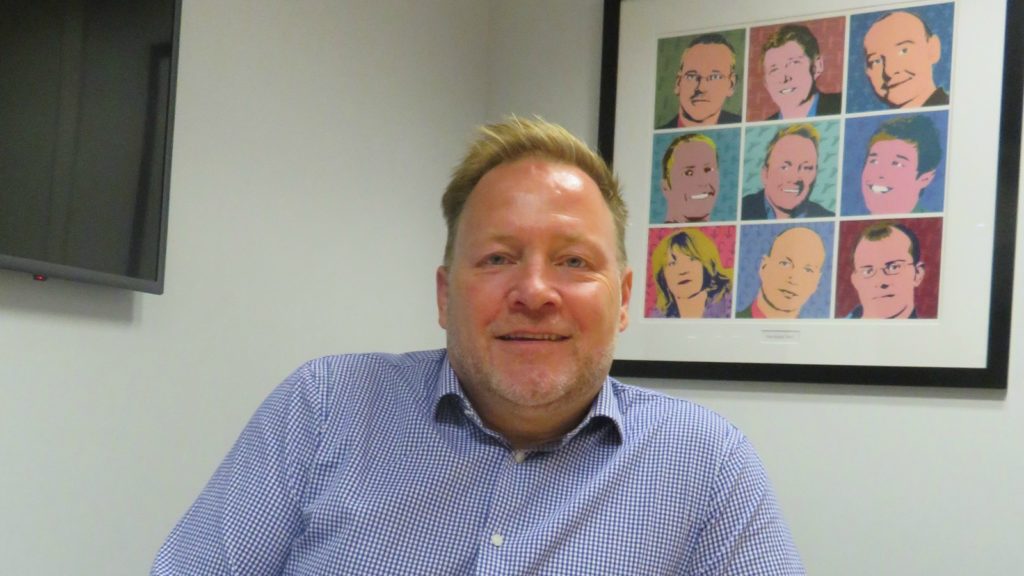 Having been a disruptor brand back in 2003, Abode is still keen to shake up the market.

It may no longer be the “petulant teen” of its early days, as managing director Darren Holliday describes it, with the business having matured and now a part of the Norcros Group.

However, Holliday is keen to point out “it’s very much a fun-loving adult”.

Although he attributes some of its success to “being in the right place, at the right time, with the right ideas and retailers liked it”. countless brands have peaked from initial excitement only to disappear.

Instead, he later admits “perserverance and belief are important to be a success”, adding “you’ve got to invest in your position. You’ve got to be forceful, like exhibiting at trade shows.” And Abode has certainly done that!

Holliday exclaims: “When I started the company I thought the maximum size it would reach would be a £3million turnover. We blew that out of the water pretty early on. We are currently trading at £13million.”

The company has continued to deliver double digit growth, with sales mainly in retail but also across trade and export markets.

Now the brand has grown its retail footprint to over 900 displyas in stores across the UK, including John Lewis, and is selling Abode and Pronteau-branded hot water taps into Wickes and Benchmarx.

Holliday says: “The Pronteau hot water taps have been a massive success. Their growth was 243% on the prior year.”

He suggest consumers trading up from a standard kitchen tap, and a reduction in the number of manufacturers supplying hot water taps, have helped Abode secure sales.

He also thinks the number of suppliers of hot taps will further diminish: “I think some companies have paid lip service to the product group and they are losing patience and not seeing results”, exclaims Holliday.

Admittedly, Holliday says Abode was a late entrant into the hot water tap sector, but he counters “that’s because we sat back and watched where the problems occurred and then designed the product to counter those issues.

“We designed a product that you could descale easily and straightaway the retailers recognised the innovation.”

And the company has since brought in hot water products, at differing price points, to cater for a wider market. 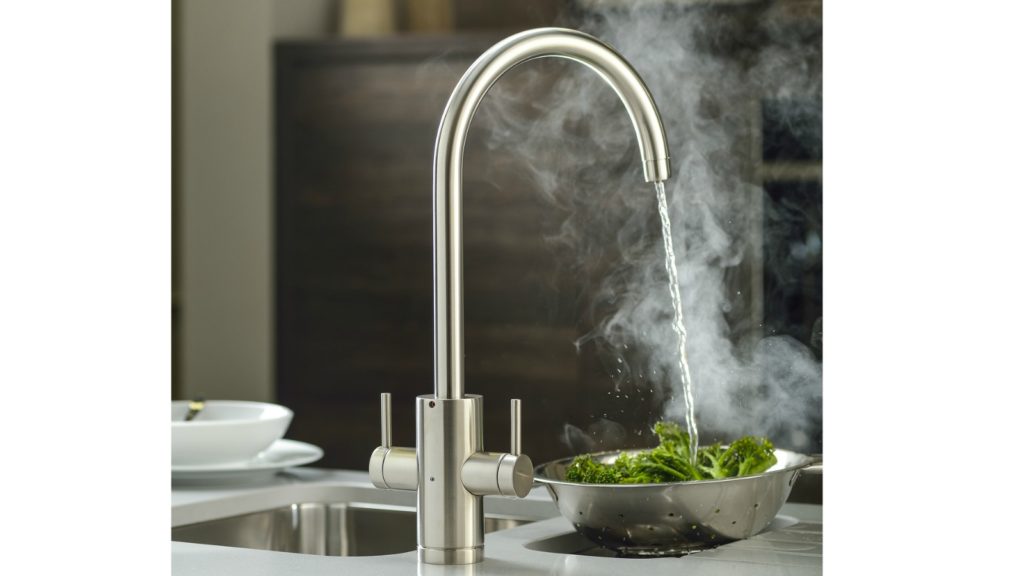 Preonteau 3-in-1 is available in a choice of three styles: Prosteam with a rounded spout, Protsyle with a squared spout and Professional

It is the investment provided by parent company Norcros, over the past two years, which has helped the company invest in new product development and people to deliver growth.

And the pace is prolific, as the company launched 90 products at KBB2018 alone, including a relaunch of its sink collection.

Holliday says product lifespans have dropped from seven years to perhaps three or four years, with colours and finishes moving even faster.

He says the challenge is supply: “The expectation of the Amazon generation, now, is that I order it on a Monday and get it Tuesday.

“So keeping the supply channels full, but not overly full, is a challenge and you have to think on behalf of the distributors and the retailers – not just what you have in your warehouse.”

He continues: “I think, these days, manufacturers take more responsibility. But, actually, that’s the way it should be because you can’t have a proliferation of product and expect the distributors and retailers to carry that same level of product.”

However, he says there isn’t a limitation on SKUs for the company: “I don’t think there’s a limit, as long as you’re growing.

“The problem is when you’re not growing and you end up with thousands and thousands of SKUs because it becomes very inefficient and the Perato Rule kicks in.

“But you also need those products that are the ‘wow-factor’ and sometimes it’s just a case you launch a product knowing full well it will take a year before that trend really hits.”

He continues: “You’ve got to be ahead of the curve to make an impact but not too far to scare people and that is something we haven’t always got right.

“Sometimes we’ve been too far ahead of the curve with product design and people have gone ‘woah’.” But he smiles, “they’ve been banished from my memory.” 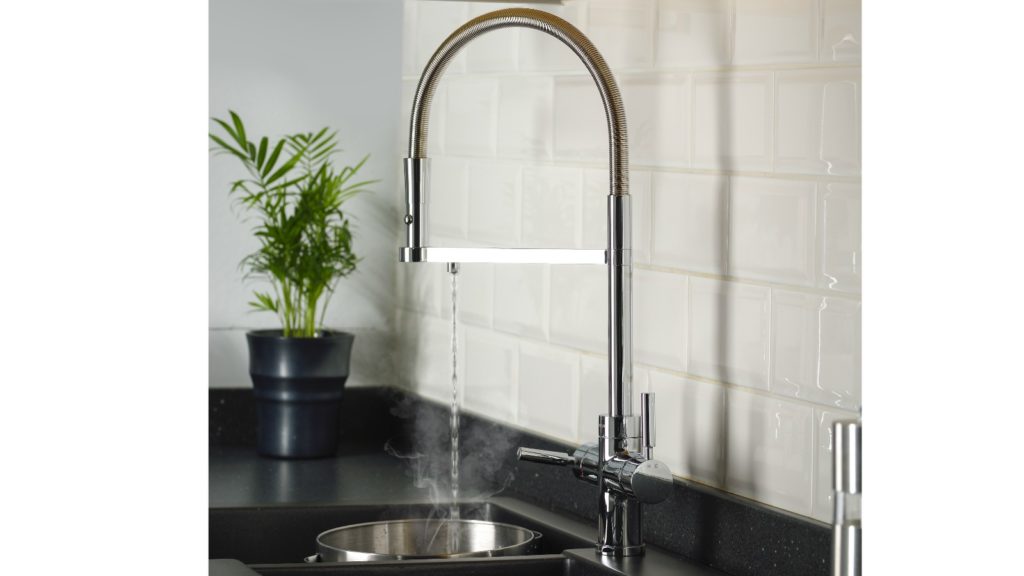 The Pronteau Professional dispenses steaming hot water from a separate outlet on the extension bar. It also has a pull-out spray on the standard hot and cold water feed

Seemingly untroubled by the challenging sales environment, Holliday states the recession worked well for Abode, “we doubled our turnover in that period” and is perhaps one of the few who believes Brexit could be good for business.

He explains: “When times are good, people never review what they do and they never look a who are supplying them and what value they are getting.

“People realised we were very good quality, offered very good prices and it worked for us because people gave us that chance.

“I think that could be the same thing when Brexit comes along.”

He continues: “I think Brexit is going to have an economic impact and a slowdown – we are already seeing it in new mortage applications and sales in the South East.

“The North of the country is likely to slow down, as well, and that will have the obvious knock-on that people won’t be putting on extensions with kitchens and bathrooms.

“So I think we will see a slowdown in volume in our markets for a while, but not necessarily on the value of projects.”

But isn’t Abode now part of the old guard, giving newer companies the chance to win its business in a challenging trading environment?

“I wouldn’t say we are old guard. We are still the new kids on the black when you look at our competition.

“Our attitude is still very fresh and we want to do things differently and be the people who are moving and shaking, and fleet of foot.

“I always like it to being a racing yacht – if we can be like a racing yacht which is able to move quickly and cut a different path through the waves, and our competitors are oil tankers taking a long time to move, then that’s what’ll keep up ahead of the market”, replies Holliday.

With the financial backing of Norcros, which is driving the company to become a well-known brand, eventually gaining consumer level recognition, Holliday is continuing to build on the company’s portfolio.

However, having a broad range of products, including the patented Swich and Pronteau 4-in-1 taps, what could be possibly left to launch? 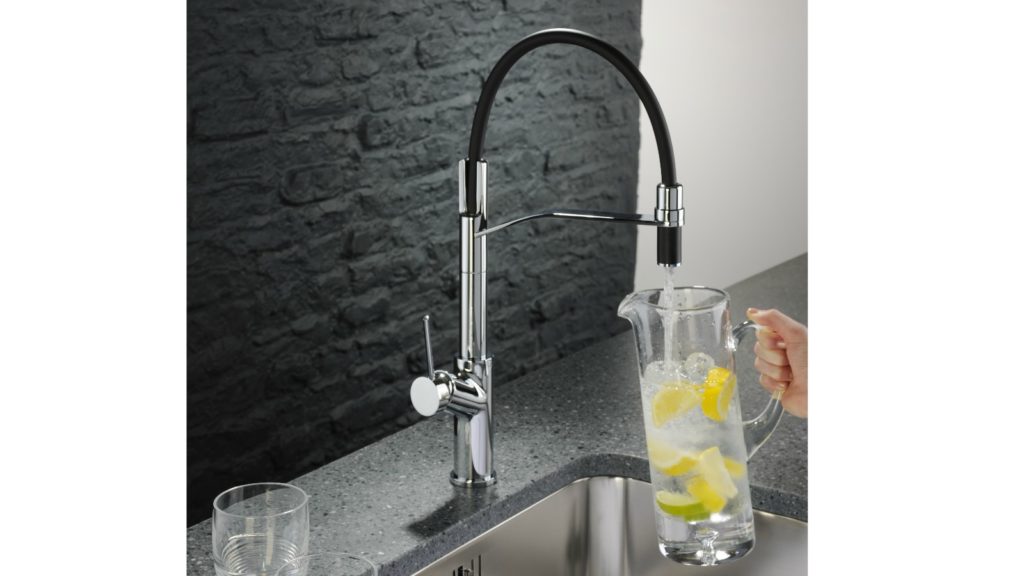 Holliday says there is always room for developing luxury ideas for the mass market, explaining: “There are massive opportunities, in my opinion, and that’s based on want.

“Consumers don’t need anything, these days. They’ve got everything. The opportunity is creating want where they want something, rather than need it, and at a price they can afford.”

And he is looking to broaden sales channels too: “We started in the retail channel because that’s what I knew and more recently we are getting involved in specification as the brand becomes better known by architects.”

But that doesn’t mean the company is turning its back on the retail channel – far from it.

“If we go back to the early days, we were an unknown brand and we had to be a disrupter to get a foot in the door, then open a path to sell stuff.

“So we have always been open to working with retailers and supporting them with ‘no quibble’ warranties because it differentiated us from everybody else out there.

“I think more recently people have copied what we do and so it is time for us to be a disrupter again.”