Sarah Reeve-Daly, director of Alon Interiors, established her business during a recession and nine years later she has acquired her third showroom in Gravesend, Kent.

Despite not explicitly looking to expand her business, which already consisted of showrooms in Ashford and Larkfield in Kent, Sarah seized an opportunity presented to her with both hands.

She knew the previous owner of Swans Kitchens & Bathrooms and he had decided to retire, ending his 35 years at the helm of the business. 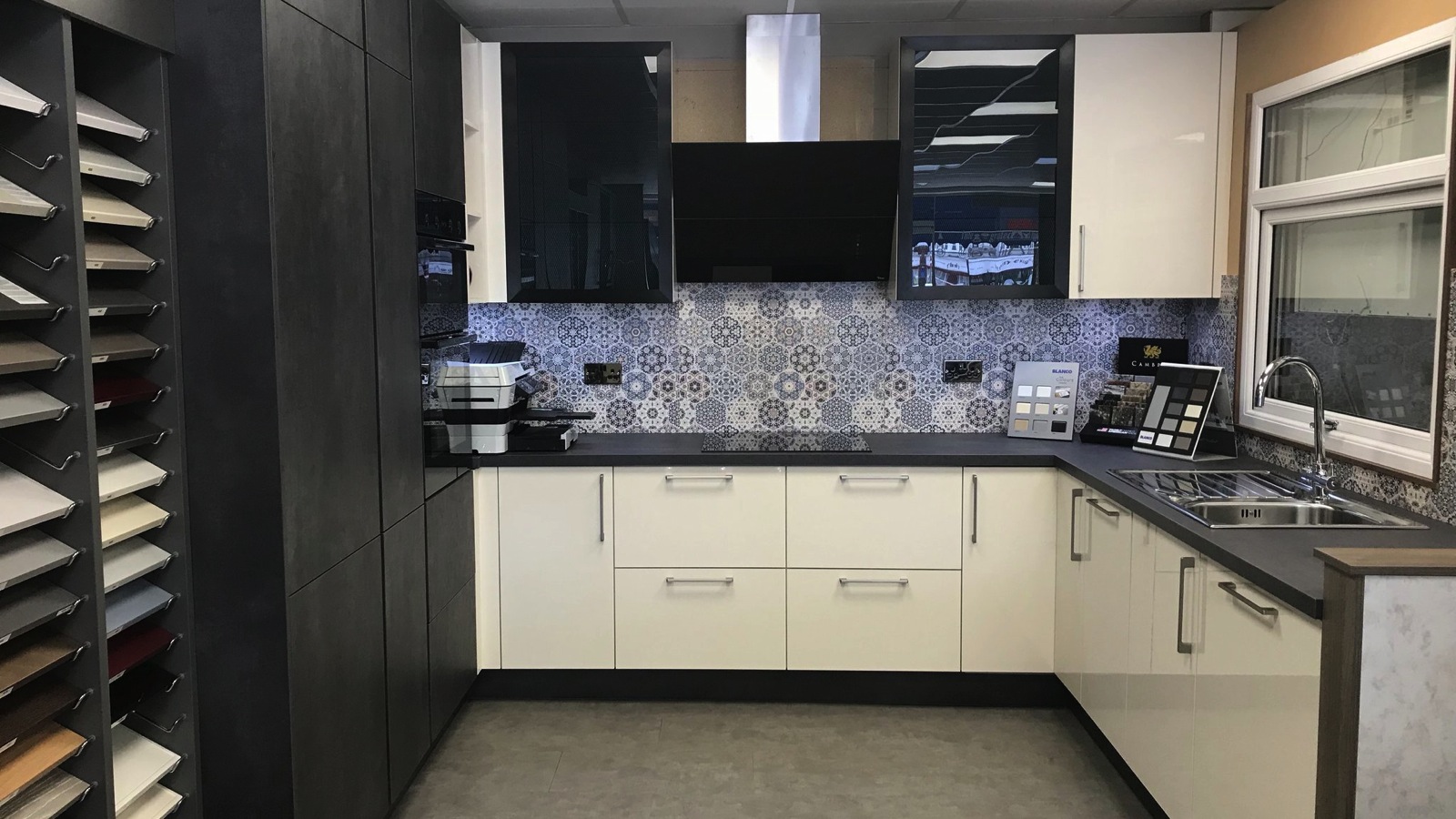 Monochromatic features are a popular trend at the moment, shown extensively in this display. Stone-like designs adorn the tall cabinets, while the glass white finish on the cabinetry is smudge resistant

Sarah describes the process: “It was just a natural transition for us to expand the business, and to move into a different area. I wasn’t looking for it, it just found me. I wasn’t sitting there thinking ‘I want to buy another showroom’, it was just an opportunity.”

With that, Alon Interiors’ third showroom opened last October in Gravesend. However, Sarah decided to retain the name ‘Swans Kitchens & Bathrooms’, instead of rebranding under the Alon Interiors business.

She explains: “We’re Alon Interiors, but we’re trading as Swans, it’s all one company. We’ve retained the previous name for longevity and the returning customers.”

She adds: “Swans was already established so that’s why we kept the name – we are modernising it, though. We’ve updated the website and introduced a new logo, so Swans will have a more modern feel.”

From alone to Alon

Having previously worked for two kitchen companies, Sarah was well-versed in the industry when she started Alon Interiors. She began the company by herself, and that’s the way it remained for quite some time.

She explains: “When I started Alon from scratch, it was just me. I was advertising the showroom heavily before it opened, and working on leads, and then I built it for five years before I took on another member of staff – it took that long to build it to the point where I needed to bring in help.” 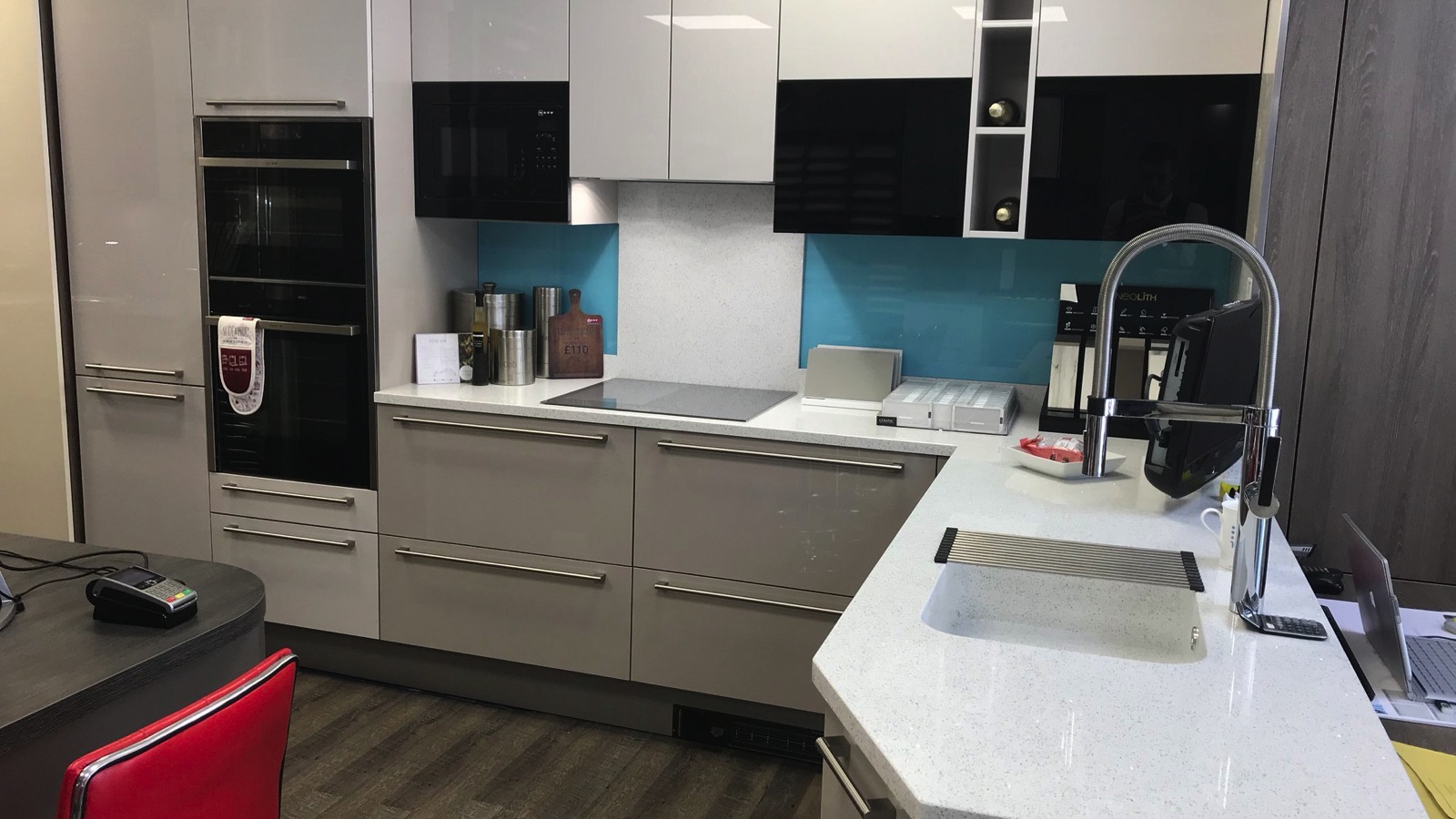 Alongside British manufacturers, Alon Interiors use German engineered solutions for their customers

Its head office is in Larkfield, which is where Sarah began the company, and the second showroom is in Ashford, which is its distribution centre.

But it remains a close-knit team: “We are like a family and we all do genuinely get on. Recently, one employee entered himself into a design award, and he was selected as a finalist from over 500 entries.

“So, we took the whole team to the event, we had a table and we all stayed overnight. We recognise and reward our employees when they achieve something exceptional.”

In fact, he is the only male at Alon, as Sarah adds: “We only have one man working amongst seven girls, which is pertinent in this male-dominated industry.”

When Sarah founded Alon Interiors, its showrooms exclusively housed kitchens, with bedrooms and bathrooms only being offered as an add-on to returning customers.

The purchase of Swans Kitchens & Bathrooms has seen all three areas on equal footing in the showroom for the first time. Sarah admits: “It was definitely a challenge, purely because I was stretched to my limit.

“Running the business originally was very time consuming, but then having to take on this showroom [in Gravesend] as well, I was very stretched.”

She adds: “It’s certainly been a learning curve, but also what’s interesting is that the two businesses operate very differently, even though they’re geographically close.” 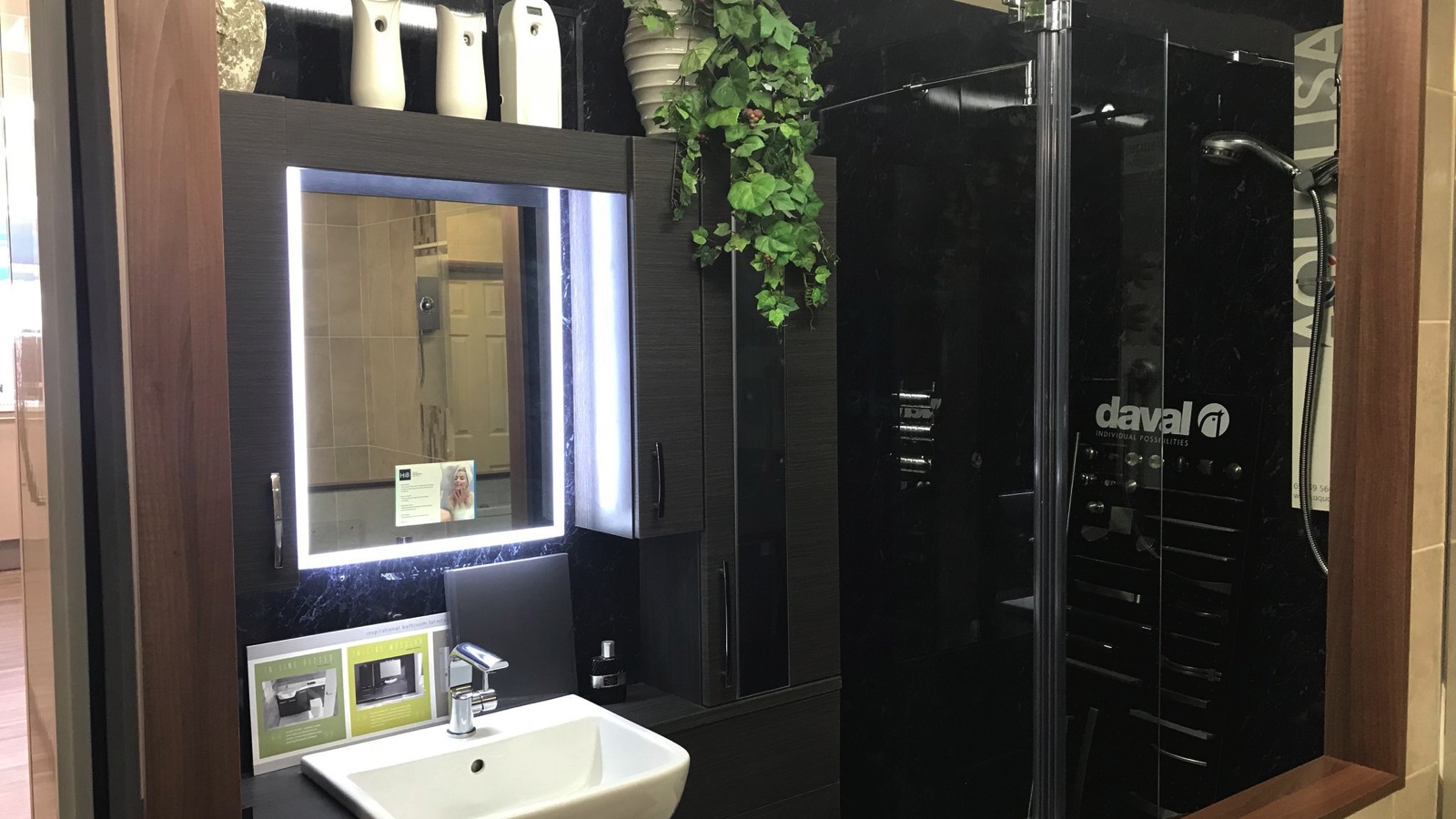 Alon Interiors has predominantly offered kitchens in its showrooms in Ashford and Larkfield. So, it saw a transition for the business with bathrooms gaining an equal presence in the Gravesend showroom

All of Alon Interiors’ showrooms operate out of Kent, so the fact that the consumers are so different is interesting, and presents yet another challenge for Sarah and her team.

She explains: “In Gravesend, the consumers like to see some kind of discount structure, whereas in Larkfield our price is our price.”

She also says: “In Gravesend, most of the clients are in close proximity to the showroom, whereas in Larkfield, we seem to cover a much larger area.”

Crucially, despite having to now split her staff between three showrooms instead of two, business is not suffering: “It hasn’t massively affected Larkfield. We’ve got a full-time salesperson in Gravesend now, but we’ve all made sure to jump in.”

She adds: “The people who sell out of Larkfield will now primarily work from that showroom, and likewise in the Gravesend showroom.”

Progression from the recession

Alon Interiors was founded in 2009 – right in the middle of the recession. Sarah reveals: “Everyone told me it was totally barmy, but that made me more determined to succeed. I’m not easily defeated either.”

She adds: “We had a downtime in Larkfield when I first started (after around 6 months), and I just hit the phones. I called builders, developers, carpenters, and to this day, we still work with some of them.”

It’s testament to the way that Alon is run that those initial relationships remain strong, even with the political and economic backdrop of the previous decade. 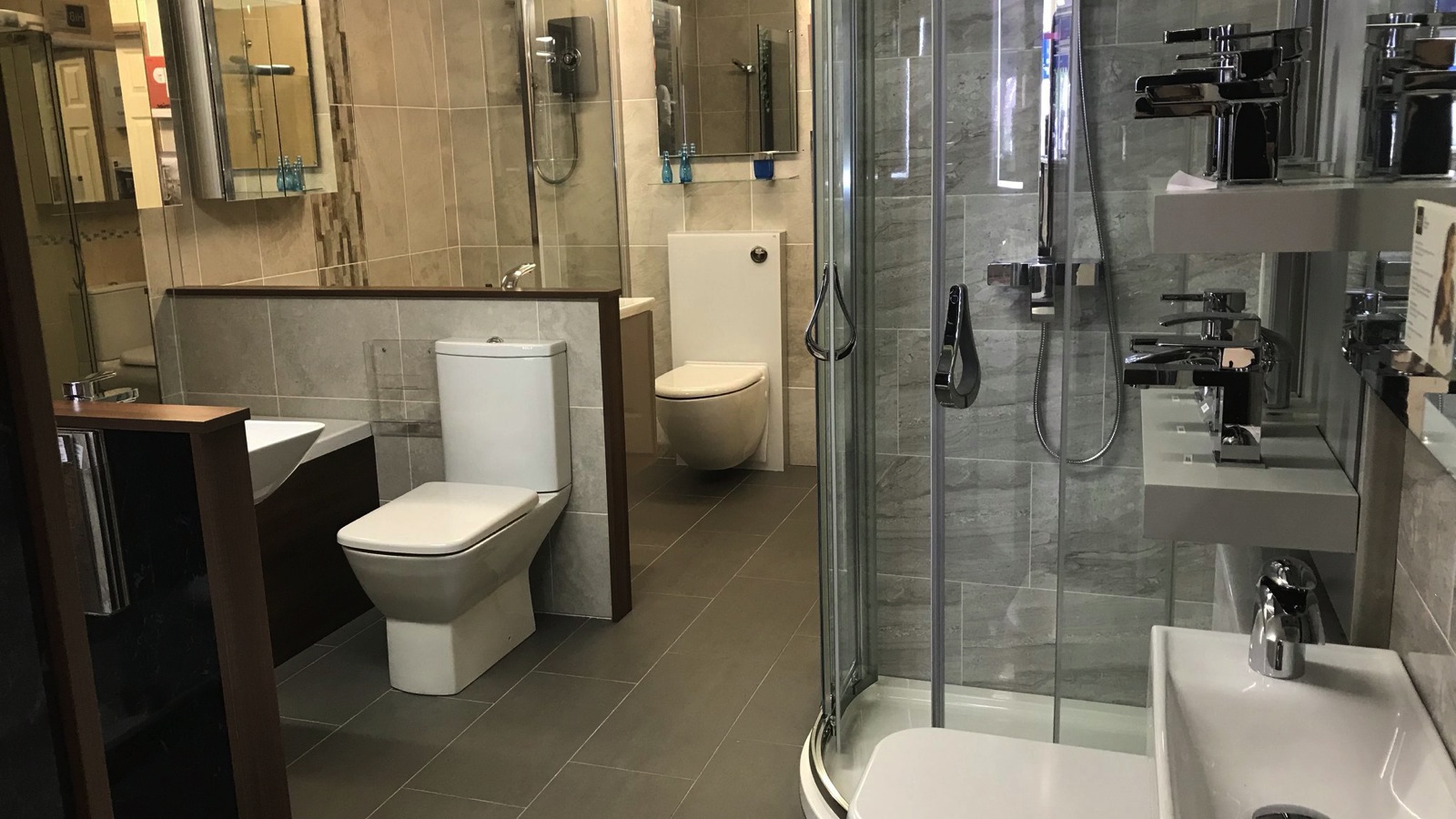 Alon Interiors has not shied away from giving bathrooms centre stage, with many different displays for the consumer to consider

And it is due to the company’s origins – being founded in a recession – that Sarah sees the current political climate as inconsequential: “People are always going to want kitchens and bathrooms, and if people can see the business and your product range are not affected, they will be reassured by that.

“If people have come to you as a recommendation, they are coming from somebody who is very happy. I don’t think they’re then going to feel uncomfortable about any background economic issues.”

She adds: “A lot of it is down to noise, and I personally think that it’s an excuse.”

Right people for the job

Having a dedicated and established team is one route to success, but Sarah is more than aware a prosperous business hinges on suppliers and fitters, as they will be the determining factor in consumer satisfaction.

“We’re only as good as the suppliers we’ve got around us, and we now have some fantastic suppliers that we’ve been using for years. We’ve got a good relationship with them, and I think that’s because we make their job so much easier.”

She adds: “It’s all about the customer journey – if you look on our Checkatrade, you can see that our customers are all very happy, and that’s how you start building the right relationships.”

Moving forwards, Sarah wants to continue developing her business by making the sales and installation more efficient, as she says: “I’d like to further develop the business by speeding up the sales process and increasing the number of fittings teams, so we can potentially complete more installs than we are at the moment.” 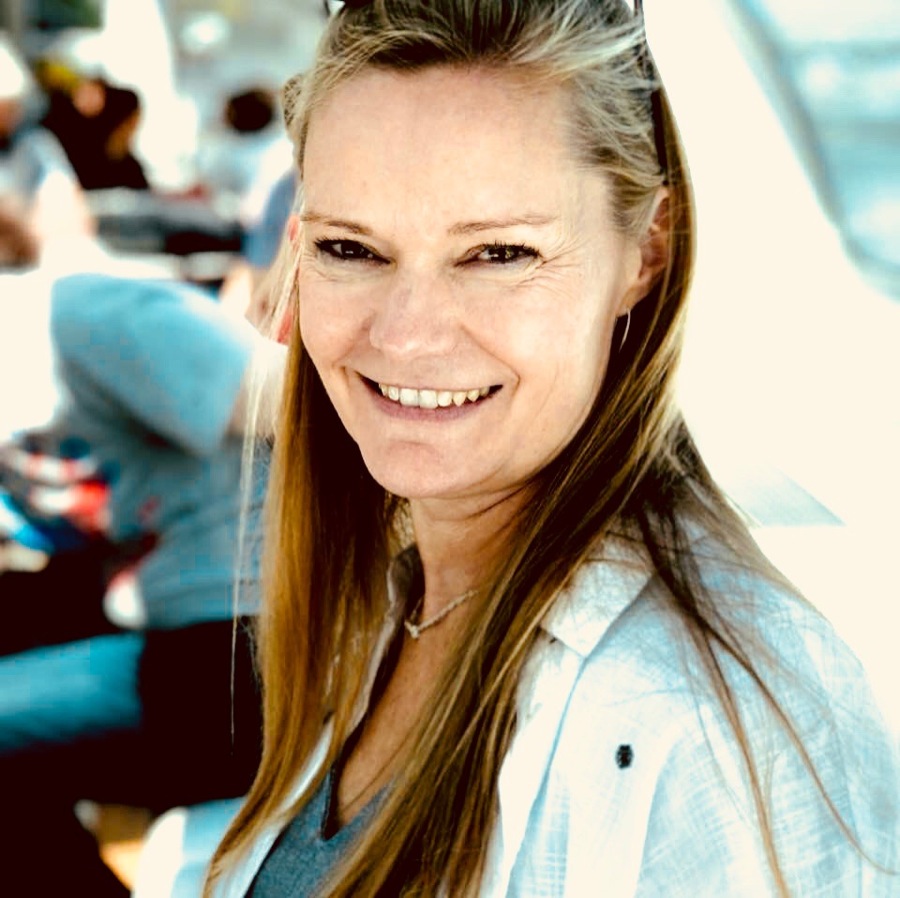 Sarah Reeve-Daly is the director of Alon Interiors, based between two showrooms in Ashford and Larkfield, Kent. Their recently-opened third showroom in Gravesend trades under Swans Kitchens & Bathrooms

However, the importance of securing the right people can’t be said enough, as Sarah is more than aware finding good tradespeople is a difficult task: “I know our fittings teams; I know how good they are.

“So, taking on a new team is not very easy. I’d prefer for customers to wait longer, but we use fitters that I can guarantee will do the best job.”

But, the need for more installers certainly isn’t stopping Sarah looking towards the future: “In October, a year after we started here in Gravesend, we’re going to have an open day for the showroom. We’re also doing one in Ashford in the same month.”

Sarah concludes that taking on an additional showroom has been good for the Alon business. Certainly, she hasn’t looked back: “We’re growing in the right direction.”

Check out our previous reader profile, where we visited Chris Burton, managing director of The Brighton Kitchen Company, to talk about his maverick approach to design and sales.