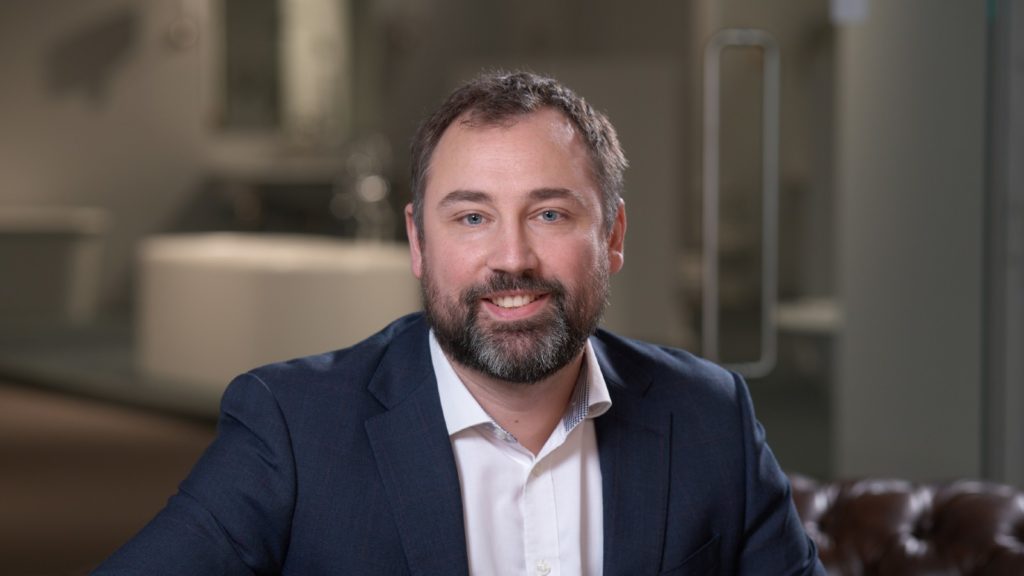 Bathroom distributor Davroc has not only launched a new brassware brand – Coalbrook – but at the same time invested in a showroom to support it.

Well-known for its traditional brassware offer of Lefroy Brooks, Davroc has also supplied contemporary brassware but has recently taken the opportunity to create its own brand “to bridge volume and higher-end design”.

Managing director Chris Dodds explains “There wasn’t really anyone doing what showrooms were telling us they needed, in terms of a good range, well-priced and all the finishes available across every product”. He adds: “We think there’s a niche that no-one sits in.”

Davroc launched the industrial-style Coalbrook brand, which took its name from the location of the world’s first iron bridge Coalbrooksdale. 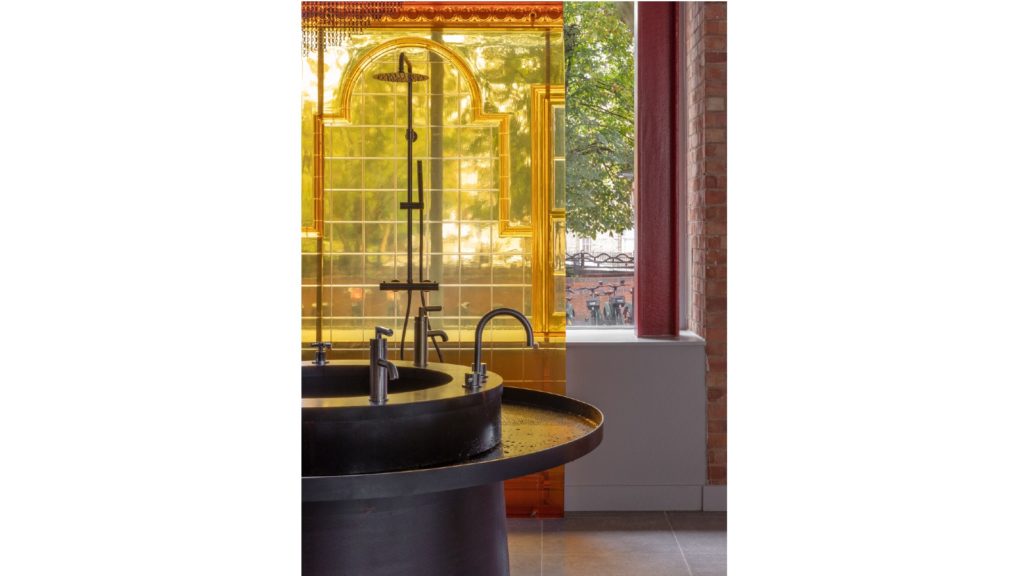 The collection was established with two ranges Domo and Decca, which span deck and wall-mounted basin mixers, deck and freestanding bath fillers, showers and complementary accessories.

All are stocked in four finishes; Brushed Brass, Brushed Nickel, Gunmetal and Chrome.

These have been joined by two additional ranges of Bank and Zurich, providing 400 SKUs across the four ranges and four finishes.

“It’s quite a tight range, in that respect”, says Chris Dodds. He explains: “We are trying to be very selective in terms of the products we bring in, so we can continue saying to people every product is available in every finish in every range. It’s a simple but strong message.”

It has seen a challenge for Coalbrook to maintain its stock levels, particularly as the business won a hotel project for 250 rooms early on. 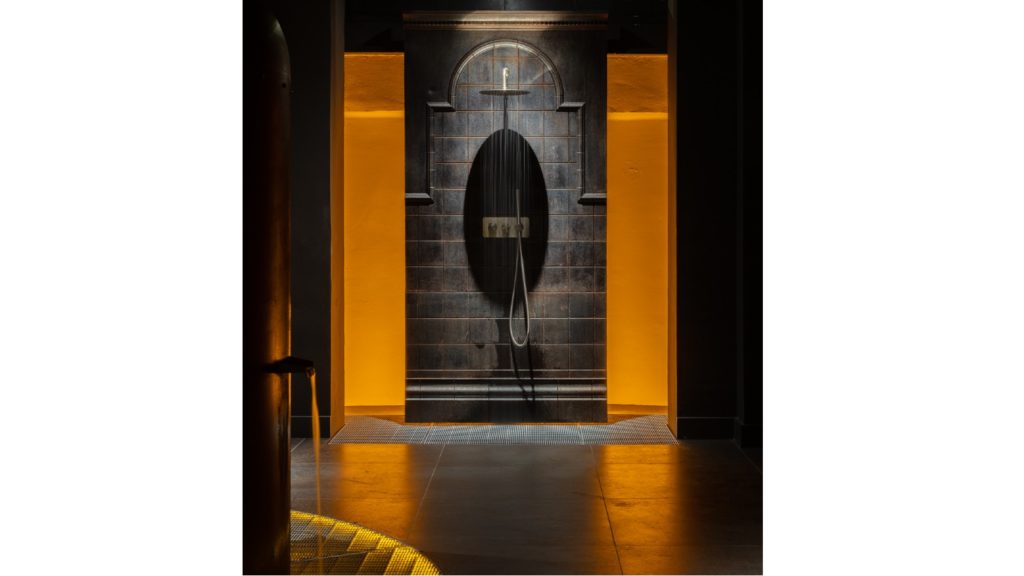 Created in-house by co-owner Giuseppe Corbisiero, Bank and Zurich will be added to the existing brassware collections at trade show Kbb Birmingham

Dodds says: “We were hopeful it would be successful, but it has been incredibly successful. So we have invested heavily in stock. If you make a commitment, you’ve got to back it.

Dodds admits the company has “gone over and above where we thought we needed to be, so we could built in the capacity to supply projects”.

However, with the backing of the 40-year old Davroc, owned by Giuseppe and Pietro Corbisiero, commitment to stock has also bolstered the success of Coalbrook, enabling the brand to become established “probably quicker than we would have otherwise.”

Made in China because “it’s very difficult to make a competitively priced product in Europe”,  explains Dodds, Coalbrook brassware is WRAS-approved and complies with BREEM regulation.

It forms part of the brand’s ethos, as Dodds adds: “Our real premise with Coalbrook is that we wanted it to be simple, so there was never any situation where a customer said ‘yes…but’.”

He conceded: “There are brassware specialists that do everything and anything. We won’t be that. We’ll aim to be easy to deal with and tick as many boxes as we can.”

Davroc has also invested in a new showroom for the Coalbrook brand, in a former pie factory The Market Building in Clerkenwell, London to target the project sector. 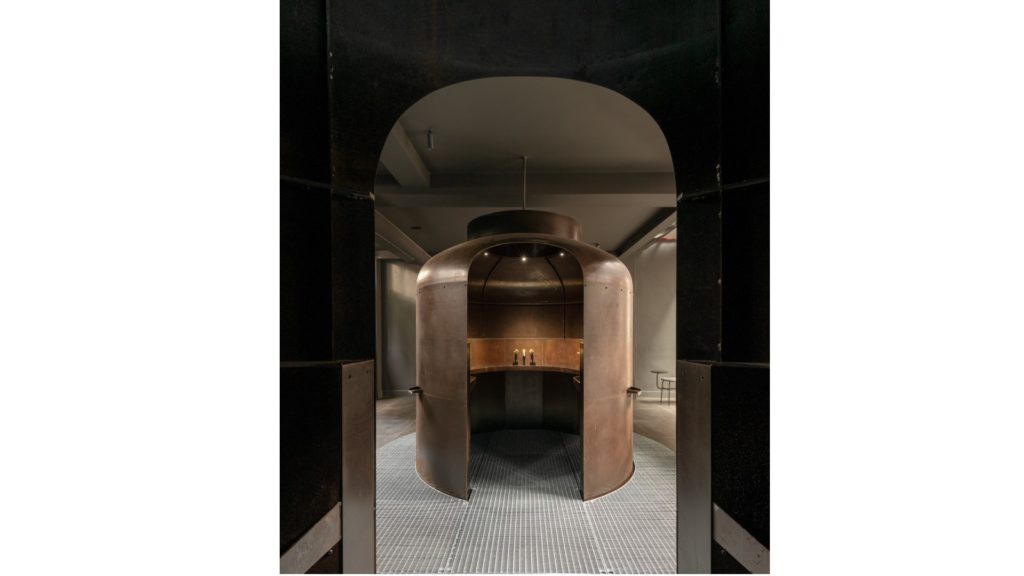 The two-storey showroom plays homage to the industrial styling of the brand with colourful, resin architectural freezes and a lower floor with cut-out boiler hosting working brassware

Designed by architectural practice Holloway Li, the two-storey building plays homage to the industrial styling of the brand with colourful, resin freezes and a lower floor with cut-out boiler hosting working brassware.

It is a collaborative space which also features furniture from Menu, lighting from Phos and a stonemasonry company which creates self-supporting staircases. “It almost feels more like a gallery than a showroom”, says Dodds.

Now, the Coalbook brand will also be introduced to retailers at kbb Birmingham. Dodds says: “We’ve got around 110 dealers and this will grow to 140-150, once we’ve filled all the geographical gaps. But we’re not looking for it to be overexposed.” 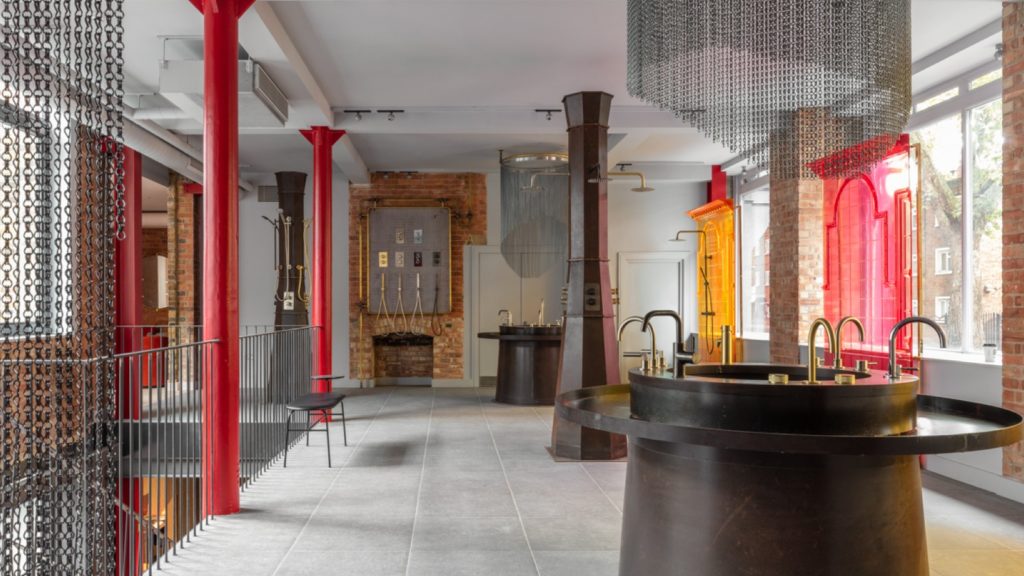 Designed by architect Holloway Li, the collaborative space features furniture from Menu, lighting from Phos and a stonemasonry company which creates self-supporting staircases.

The brand is supported by a brochure, features on Virtual Worlds and EasyQuote and has its own sales team, separate to Davroc.

Dodds explains: “We’ve tried to make it clear this is a brand in its own right and we’re unapologetic about that. It’s important that the brand is king.”

In return, Coalbrook is seeking a “reasonable amount” of display space in retail showrooms and Dodds adds “we’re also very keen that it’s important we’re important to them.

“That might mean we are their second choice on brassware. We understand there’s people who do things we don’t. But we don’t want to be someone’s fourth or fifth choice.”

Three years in the pipeline, Chris Dodds concludes Coalbrook “has far outstretched where I thought it would go”, continuing “the majority of people we’ve spoken to have said ‘it’s exactly what I need, it’s come at the right time and it’s been easy for me. I’m delighted with how positive the reaction has been.”