Roca | “What you’ll see is Roca being more dynamic”

Managing director of Roca UK Alan Dodds says expect the group to be more dynamic, as it competes with specialist manufacturers across the bathroom industry

Managing director of Roca UK Alan Dodds says expect the group to be more dynamic, as it competes with specialist manufacturers across the bathroom industry 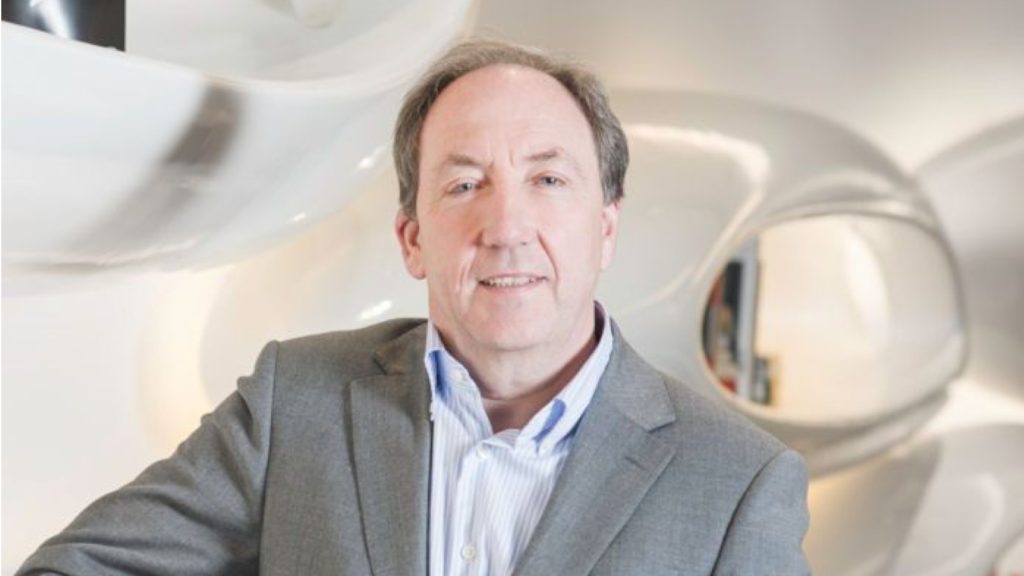 Now led by CEO Albert Magrans, the Roca Group is “probably moving faster than it has done for a number of years”, says managing director of Roca UK Alan Dodds.

He says the recession in 2008, which hit its native country Spain hard, had made the group a little conservative as then business was then focused on survival, but now he reveals “what you’ll see is Roca being more dynamic.

“I think you’ll see more from Roca, in terms of moving into other areas and a realisation that we want to be seen a complete bathroom supplier.”

It is this rationale which was behind the acquisition of the Spanish bathroom furniture manufacturer Royo, which saw Roca acquire a majority share, 75%, of the business.

The Royo Group owns three production plants and manufactures around one million pieces of furniture annually.

“Furniture is a big category for us”, explains Alan Dodds who adds: “But this moves us into a different league in terms of ranges, design, colours, lead times – you name it – the acquisition brings lots of benefits.”

And, this year, has also seen Roca acquire a sanitaryware factory in Brazil for €16million, adding to its 11 factories in that country alone.

Reportedly already the largest vitreous china manufacturer in the world, the plant will help Roca serve the American markets when its operational in February 2022.

And the expectations are this is not the end of the acquisition trail for Roca. Dodds continues: “I’m sure Roca will look at opportunities. We will continue to look at acquisitions in vitreous china because it’s our core strength but I would suggest we would be as interested in the rest of the bathroom area to strengthen it…We’re not just acquiring businesses to bolt on – they’ve got to be the right fit for the company.”

And Roca has been equally energetic with its product development, from introducing digital showers and freestanding baths through to sanitaryware designed by Brazilian architect Ruy Ohtake. 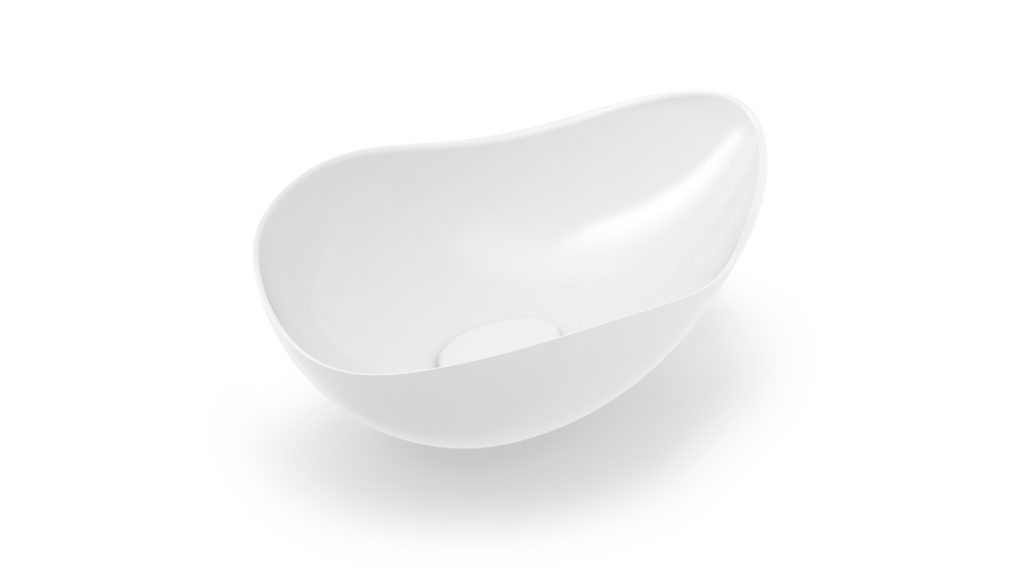 Brazilian architect Ruy Ohtake has created a range of self-titled, countertop basins which take inspiration for their shape from nature. They come in two designs and a choice of six colours.

“Last year, we cut back in a lot of areas to be prudent but one thing we didn’t cut back on was new product development”, explains Dodds.

“We now, as a group, make the biggest range of baths and the biggest number of models. We are increasing the capacity of our factory in Poland to make luxury baths and we intend to be a very strong player in that market, particularly for the Laufen brand.”

In fact, Dodds says on top of furniture, baths is one of the company’s main priorities for 2021.

Of course, without a global showcase such as ISH it has made the ability to inform trade customers about all the design stories a little more difficult, with Dodds admitting some launches have been held up so they can be shown face-to-face. 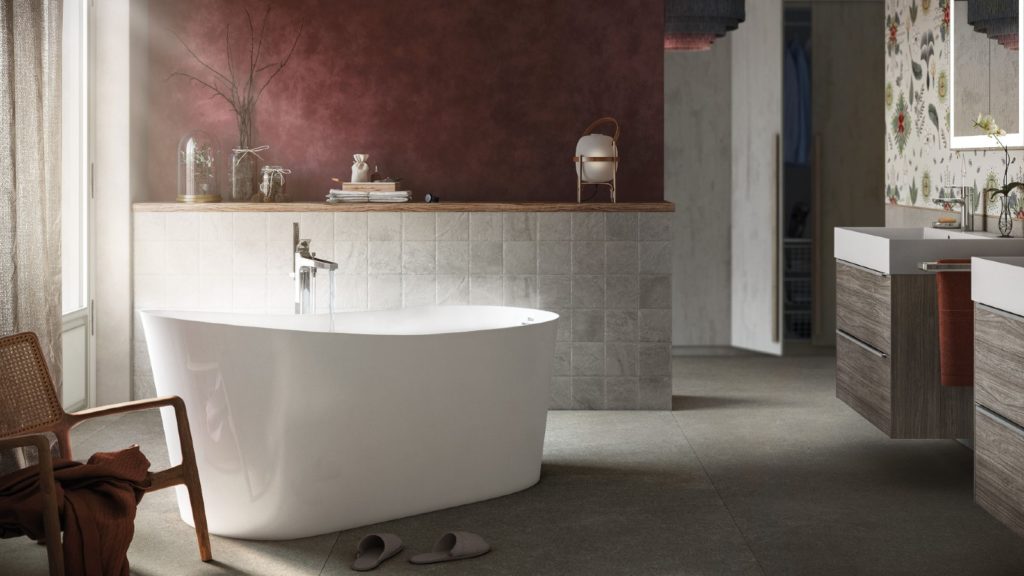 Focusing on freestanding baths for 2021, the Roca Group offers models across its Laufen and Roca brands, including Maui. It is available in round and square options.

And although the group is looking at digital events, Dodds says the focus has been communicating directly with its customers and staying in regular contact.

He comments: “Digital events are great for designers, specifiers and installers, where you are trying to get to a wide customer base but, for retailers we know, we want to communicate directly with them and as much on a one-to-one basis as we can, so we find out what are their needs, what do they want, what is important to them?”

And, generally speaking, Dodds is finding the retail sector is in “remarkably good shape”, adding “very few have gone out of business, which is fantastic. It shows how resilient they are.”

He points to sales which could be from a pipework of leads from the end of last year, but believes 2021 could follow the same pattern of sales as the year before. “There’s reason to hope the pattern we saw last year, people coming out of lockdown and deciding to invest in home improvement, could be repeated again. The Bank of England is forecasting a reasonably strong bounce back.”

But how long the upturn could last, with holidays now available as an option to consumers, and whether retailers can get the stock to fulfil orders are concerns for independents.

Dodds says “it’s difficult to know what changes to consumer behaviour will be”, concerning holidays.

But he pointed out the company has only seen small delays despite the “perfect storm” for shipping chaos with strong growth at a time when people bring their stock forward and an uncertainty with Brexit “up until the wire.”

However he states there could be an issue with increasing prices: “The biggest impact for the industry could well be commodity and raw material prices. Steel, copper, you name a raw material, and it’s shot up in the last 12 months, or even six months. If that’s for an extended period, you can’t absorb those.

“Some manufacturers have come out with surcharges because of containers and we haven’t done that. We are willing to take a medium-term view and hanging fire just to see what the real impact is and whether it’s a temporary blip or permanent change.”

In fact the philosophy of Roca has been to be flexible and adapt to the changing situations and Alan Dodds believes that will be also be the key to success for retailers. 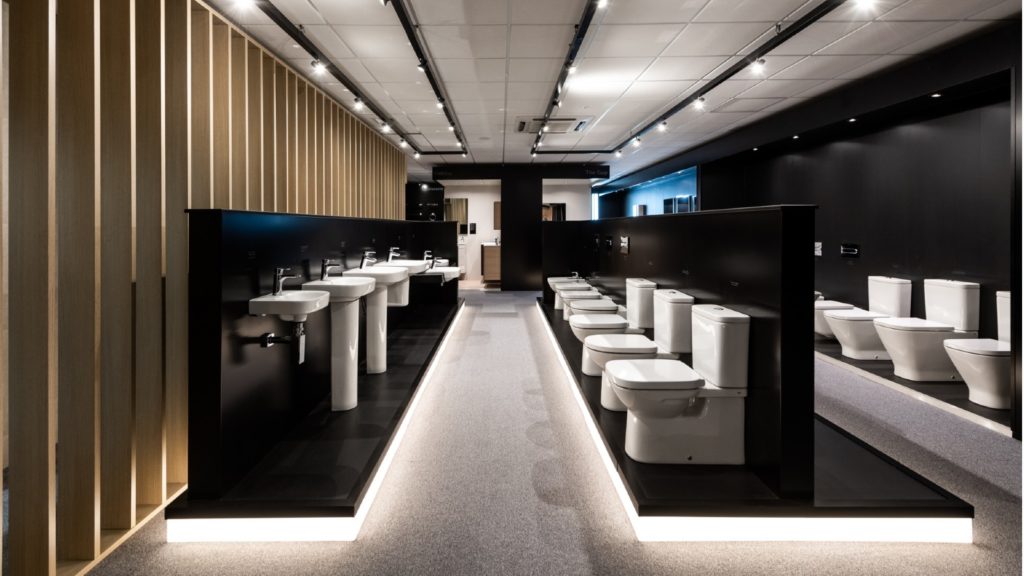 Roca opened its HQ and showroom in 2019, which features all its brands – Roca, Laufen, Cosmit and Armani | Roca. The premises measure 145,000sq ft and feature 150 more pallet locations than its previous UK base in Coalville

He is also optimistic about the rest of 2021, concluding: “I think the outlook is good. I think we probably have a couple of sticky months, as an industry, because retailers will have been shut for three months and maybe their pipeline of installations are running out.

“Assuming retail re-opens in April, then I think it could bounce back almost immediately and we should be in for a good year overall. But you’ve still got to remain flexible because things could change.”

Abode | “Embrace change as a fact of life”