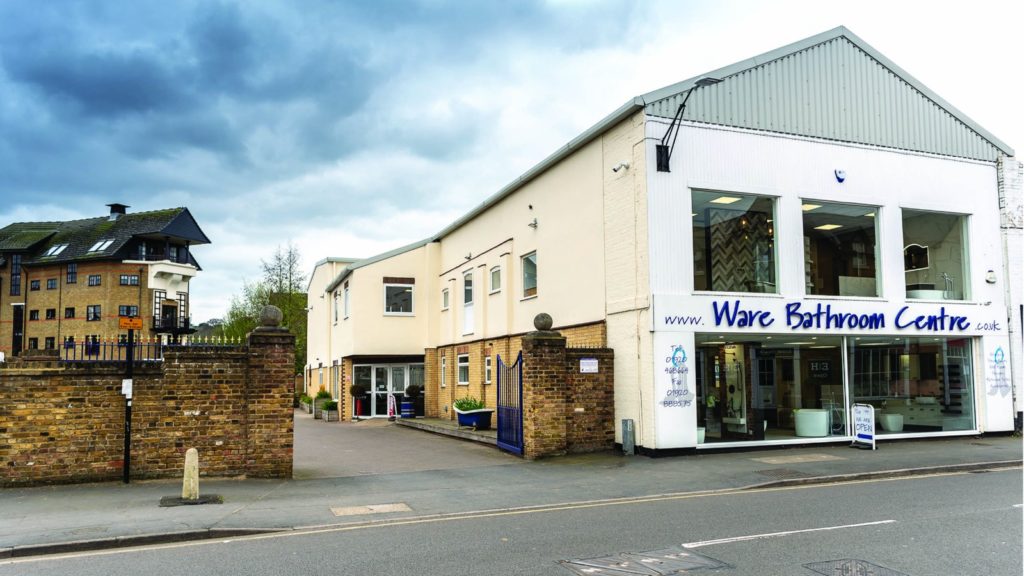 It was two years ago when Mick Nicholls received a  phone call in the morning which informed him the premises next door to his showroom – Ware Bathroom Centre – was on fire. “When I got to the showroom it was already cordoned off and about that time there were about five fire engines. Ultimately there were about 12 in attendance.”

Despite the fire service trying to put out the fire and housing down the bathroom showroom, the intense heat from the neighbouring property caused Ware Bathroom Centre to combust.

“Suddenly a poof of smoke came out of our eaves and that was it. It was alight”, explains Mick. 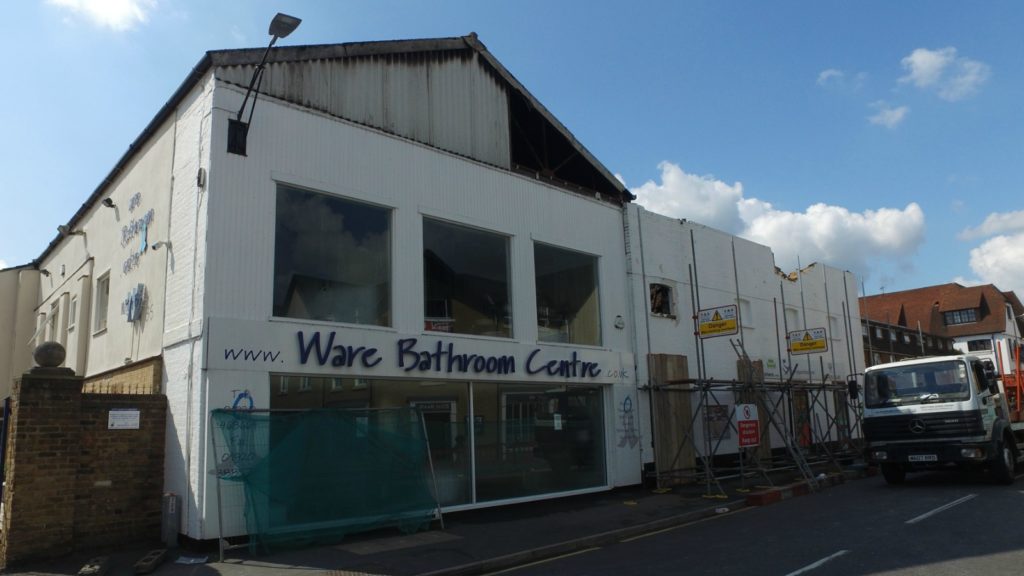 The fire had torn through the ceiling and the showroom suffered substantial water damage. Mick explains the scene “We had 4 inches of water in the front showroom and there was scum mark all the way around.

“The ceilings were down and it was an absolute mess.” It meant the two-floor 10,000sqft showroom, where the retailer had been since 1992, was unusable.

While this may have been where the story would end for many bathroom retailers, for self-proclaimed optimist Mick Nicholls it was the beginning of creating a new retail destination: “I thought ‘I’m going to turn this showroom around. It was a beautiful showroom and I’m going to make it even better and we did that.” 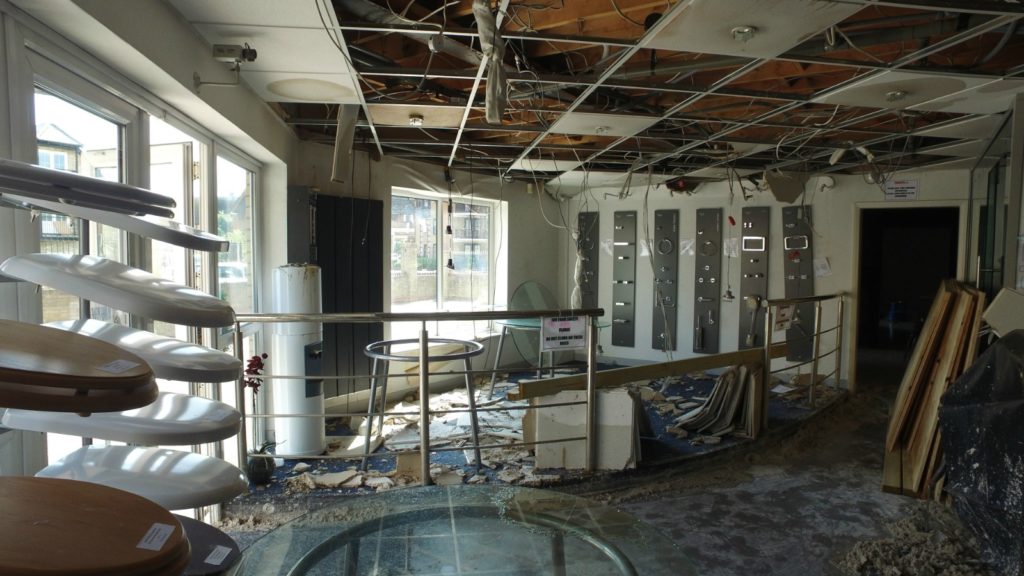 That’s not to say, Mick wasn’t offered some temptation to move locations, as Hertfordshire County Council which owned the neighbouring property where the fire started  knocked their building down.

He says: “They were convinced, I think, that we would do the same and sell the land for building. It’s probably worth about £1.6million.

“They even rang me up and said ‘we’ve got a scheme that we’d like you to look at’.

“They had got a drawing of our plot and their plot with 38 flats on it and one small commercial premises which they said we could use as a showroom and the turnover would have been 9.6million in flat sales – so you could have made a sensible amount of money.”

But with its canal-side location and being centrally positioned in Ware, Mick and his family were keen to rebuild.

The fire brigade had saved the computers and so the retail side of the business was able to relocate to the nearby premises of its merchant business – Ware Heating & Plumbing Suppliers WHABS.

“We set up desks and computers and put tables in the trade counter, if the public were prepared to come and see us without a showroom.

“We still did plans and went out to people’s houses but we lost about £1.2million in turnover.”

But Mick explains the company is financially strong, and during this time it turned its focus to contract work, as he says: “We had a slight divert where we knew we were going to lose business from the showroom so started looking at more contract work.

“We’ve just picked up 300-odd units in North London and got a big development in Elephant & Castle.”

Of course, the rebuild wasn’t without its wrangling between insurers and loss adjusters which saw a delay including being without a roof for nine to 10 months.

“It meant the building was open to the elements, “in fact, there was fungus growing in the staff kitchen, that’s how bad it was. It was sad to see”, adds Mick.

But he continues: “In the end we got paid out – not as much as we would want. They said we were under-insured on the stock, because on the policy it was down as displays and they said ‘that’s not stock’.

“They reckon we were under insured on the building and yet my broker said ‘you’re not’.

“We argued and argued and eventually I got £50,000 more out of them then they wanted to pay. It took a long time to turn it around.”

In fact, it took 15 months before any part of the showroom was re-opened. “We got back in the showroom, in some sort of degree, in December 2018.”

But this just saw the re-opening of a small part of the showroom and installation of designers’ desks and computers, as it was still being worked on.”

But Mick was quite fortuitous as the business well-insured and he says that is critical for any bathroom or kitchen retailer.

“I’ve passed the advice on to a few friends in the industry and said ‘whatever you do, you must check your insurance policy and make sure you have two years’ business interruption as a minimum’. I had that and it paid off.” 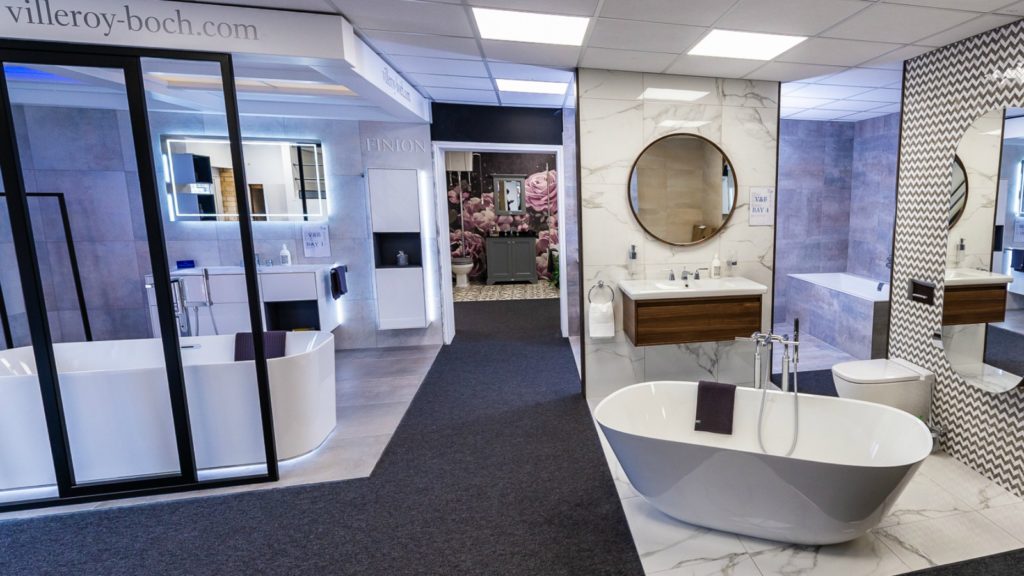 Having to rebuild the showroom from scratch meant Mick was given the time to consider the entire retail business.

“I looked at all the overheads. You don’t pay rates when you’re not in the building and we stopped the telephone lines. We stopped the CCTV maintenance.

“The first thing you do is start thinking about saving some money. In doing that, we looked at all the overheads electricity and gas  – anything that was a regular outgoing.”

It also enabled him to rethink the showroom layout and review his suppliers, asking them to help recreate Ware Bathroom Centre.

Mick explains the new look showroom is more open plan, as he comments: “We did concentrate on less is more.

“We had been in here since the 90s and we had put walls up and the idea then was to make the settings like your bathroom at home 3 x 2m. Over the years, we’ve gone away from that.”

And he encouraged suppliers to take an active part in designing the showroom, as Mick says: “We spoke to manufactures and said ‘this is a blank canvas’. We said to them – we’re got an area you plan it.

“We spoke to & Boch and we gave them prior position at the reception area and started from there.

“We already stocked Laufen but we took Roca on, which we didn’t have before. So now we have a Roca/Laufen area and for Abacus we did the same, giving them an area.”

And a buying group meeting, held at Utopia Furniture premises, saw Mick add this supplier to his showroom too.

In fact, Mick praises The National Buying Group (NBG) which he joined  six years’ ago as an “eye-opener and a bonus to the business, no question.

My accountant said to me ‘why didn’t you do this years’ ago? He says not only has it enabled to meet new friends and catch up with former friends he had lost contact “which has been brilliant” but adds “it certainly helps your buying power”. 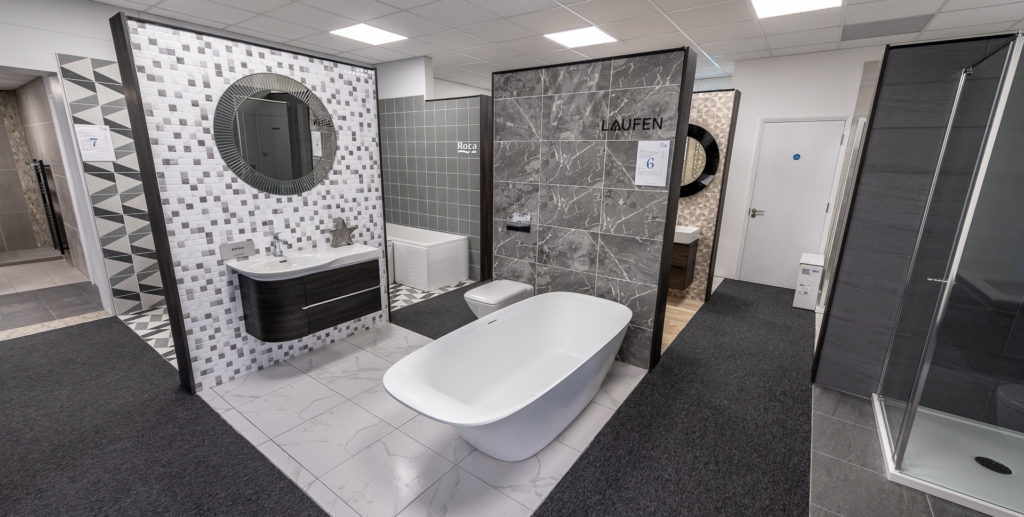 Roca has now been added as a supplier to the business, joining its sister brand Laufen

After 18 months and a £600,000 investment, Ware Bathroom Centre is once again home to around 80-100 displays and continuing to attract customer from the locality and as far afield as London, Luton and Chelmsford.

Mick exclaims: “I’ve been in this trade for 51 years. I just love it and I’m as enthusiastic today, as when I started. It would have been easy to say ‘sell it’. This has been 18 months/two years of something we weren’t expecting but have dealt with it. We’re still busy as a company. “

He attributes the success of his business to his staff, stating: “It is about good people and we have got some fantastic people.”

And Mick says service provided by his staff is paramount to a running a successful retail business. But he says the key to successful retailing for business owners is that “you don’t ever stop learning about the industry.” 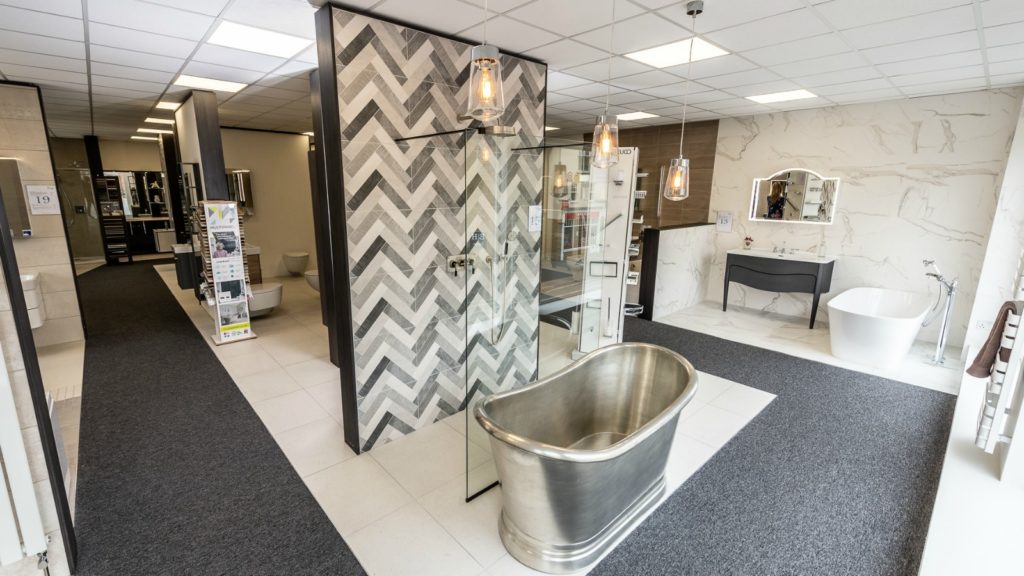 The two level showroom has been designed so it is open plan, allowing for larger and more impactful displays

And he cites the biggest learning curve and challenge to the industry has been the “internet without question –it is the biggest revolution. “We haven’t got an online shop and I’m conscious of it” says Mick.  “We’re not naive to think it’s not worth doing. People like Victoria Plum make an absolute fortune out of it”. However, he adds: “But If we started selling on line we would have to give the same service to people nationally as we do locally and it would be logistically difficult.”

But he is more decisive about the current economic climate stating quite simply “Brexit? I take no notice of that. It doesn’t worry me.

“Deal? No deal? I just wish they’d get on with it. If I’d have thought there was going to be a problem I wouldn’t have spent the money on this”, he says pointing to his showroom.

Certainly the company has been on a journey from its origins in 1982 when it was sited in an old forge, measuring 30 x 20ft, and with a trade counter hand built from pallets.

Now the company boasts a successful merchant business WHABS and the beautifully-restored Ware Bathroom Centre, it is set to take on the next stage of life.