We offer our take on the rebranded show for hotel, restaurant and bar design

Kitchens & Bathrooms News offers its take on the rebranded show for hotel, restaurant and bar design in its new home of London’s Olympia.

In a new location and with a broader show focus, the Sleep+Eat exhibition for hotel, restaurant and bar design took place at Olympia in London over two days. 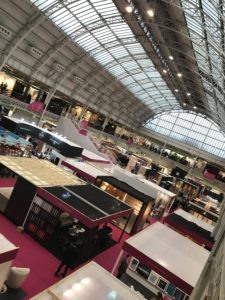 Supported for the past 13 years by founder partner Grohe, the company was joined by veteran exhibitors Roca, Laufen, Hansgrohe, Kaldewei, VitrA and Bette, with debut appearances from the likes of Merlyn, HiB, Shaws of Darwen and the recently-formed Zesther Living.

Predominantly still recognisable as the Sleep event, with little of the ‘Eat’ element visible, it was the inaugural outing of the rebranded show and so it will be interesting to see how the restaurant and bar element develops.

But gone was the higgledy-piggledy formation, with three tiers of exhibitors and Sleep Sets hidden in an adjoining space to the main show, as dictated by the layout of the Business Design Centre.

In its new home, with the show relocated to allow for growth, there was clarity of layout with a video wall entrance leading to an impressive vista of exhibitors.

However, it could be argued the more generic aesthetic has potentially lost the event its whimsical, boutique feel.

Although the Sleep Sets were now incorporated into the body of the show, interspersed between exhibitor stands, there seemed to be less emphasis on the concepts with their original design thinking.

The distinction was further muddied as manufacturers moved towards more conceptual stands, creating their own inspirational themes.

However, the success of the show is dependent on who it attracts and whether the visitor profile matches the expectation of exhibitors.

The volume of visitors seemed steady, with many exhibitors pleased if the numbers were on par with last year.

But there was a lingering question: would the architects based in East London follow the show?

The answer seemed to be ‘yes’, but there was also a greater emphasis on interior designers and a 24% increase in international visitors due to the show’s proximity to Heathrow Airport.

In fact, managing director of Roman David Osborne was emphatic the show “did not disappoint.”

Here are some of our top picks from the exhibitors who attended the show: 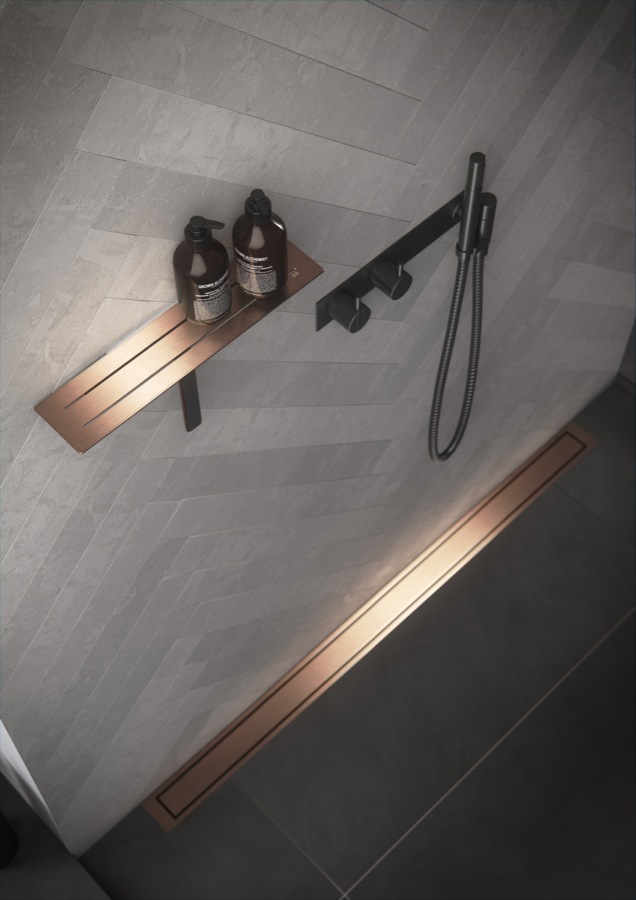 Founded by Danish architect Claus Dyre, Unidrain offers bespoke linear floor drains which can be covered with stone or in a choice of finishes to complement brassware.

Also, the company showed its Reframe Collection of bathroom accessories, which includes hooks and bars, designed to prevent towels slipping, as well as a soap shelf with a magnetic, undermounted shower wiper. 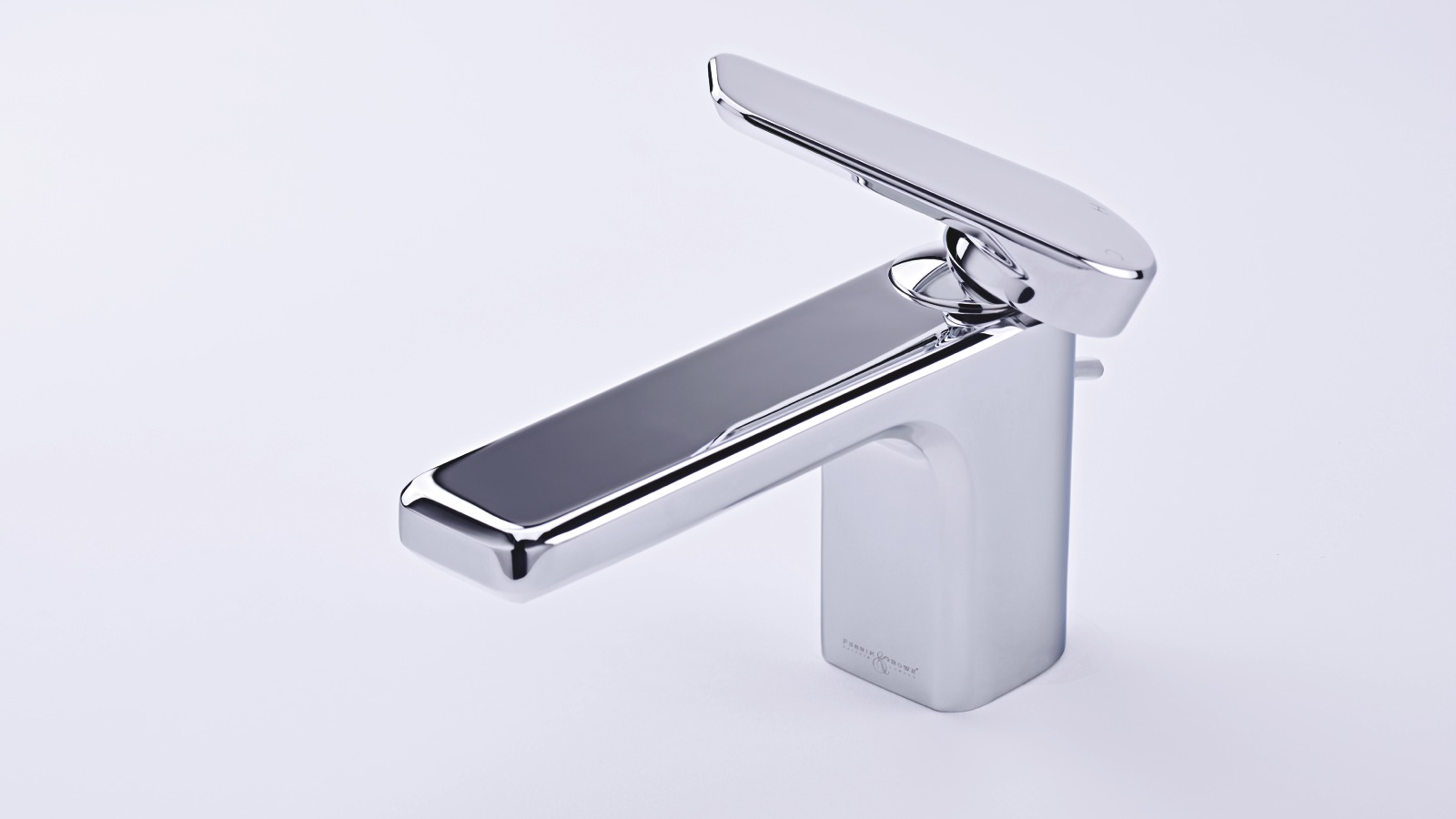 Named after the area of Shoreditch that stimulated the creative revival of East London, Hoxton is characterised by a slim spout and soft, curved lines.

The range includes a bath/shower mixer, shower set, single lever basin mixer and accessories which all come in Chrome, Nickel and Pewter, or special finishes to order. 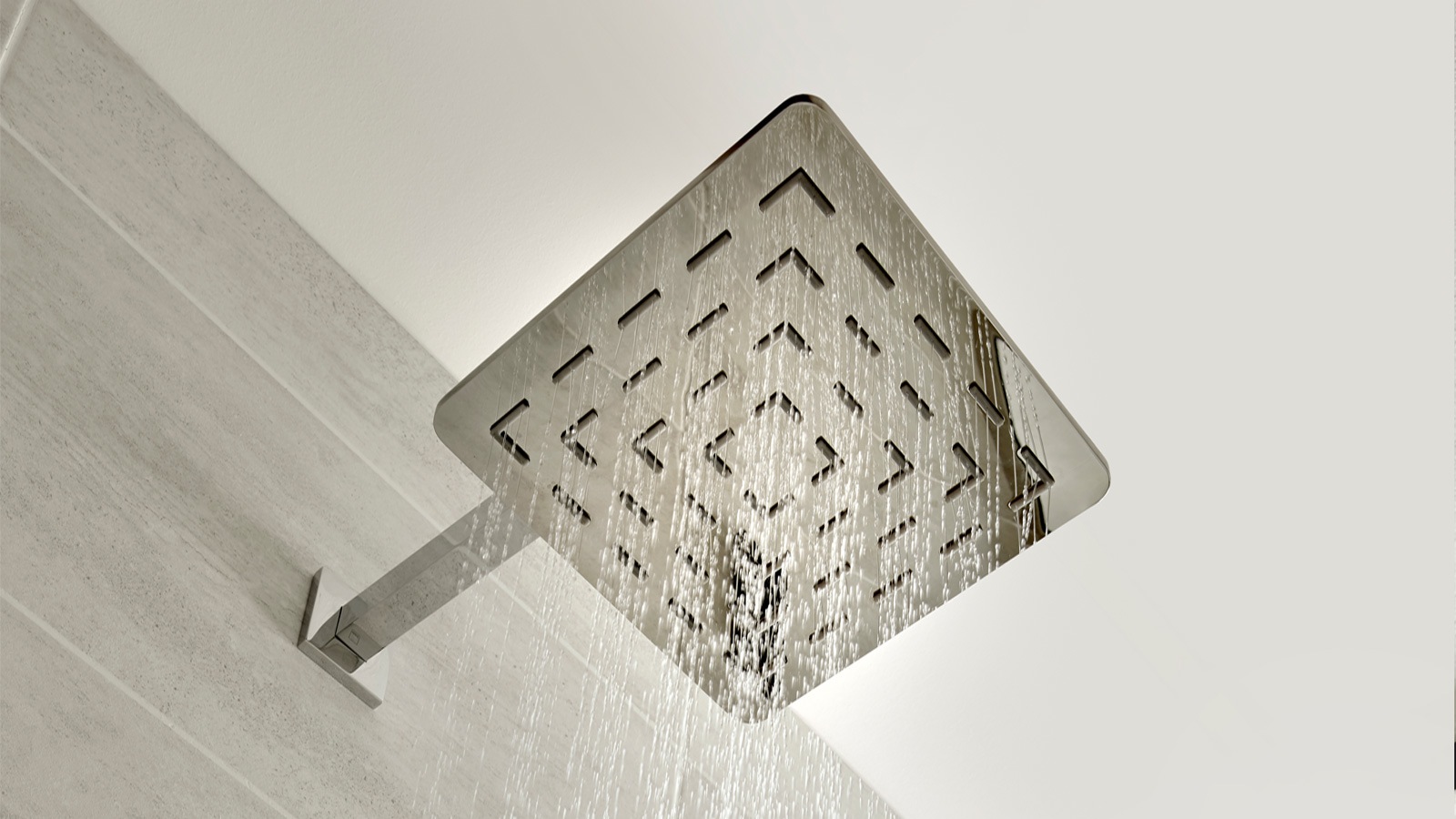 Equal in billing was its latest Geometry shower head, available in round and square designs.

It features a stainless steel finish, brushed around the edge to contrast with a polished face plate, and is guaranteed for 12 years. 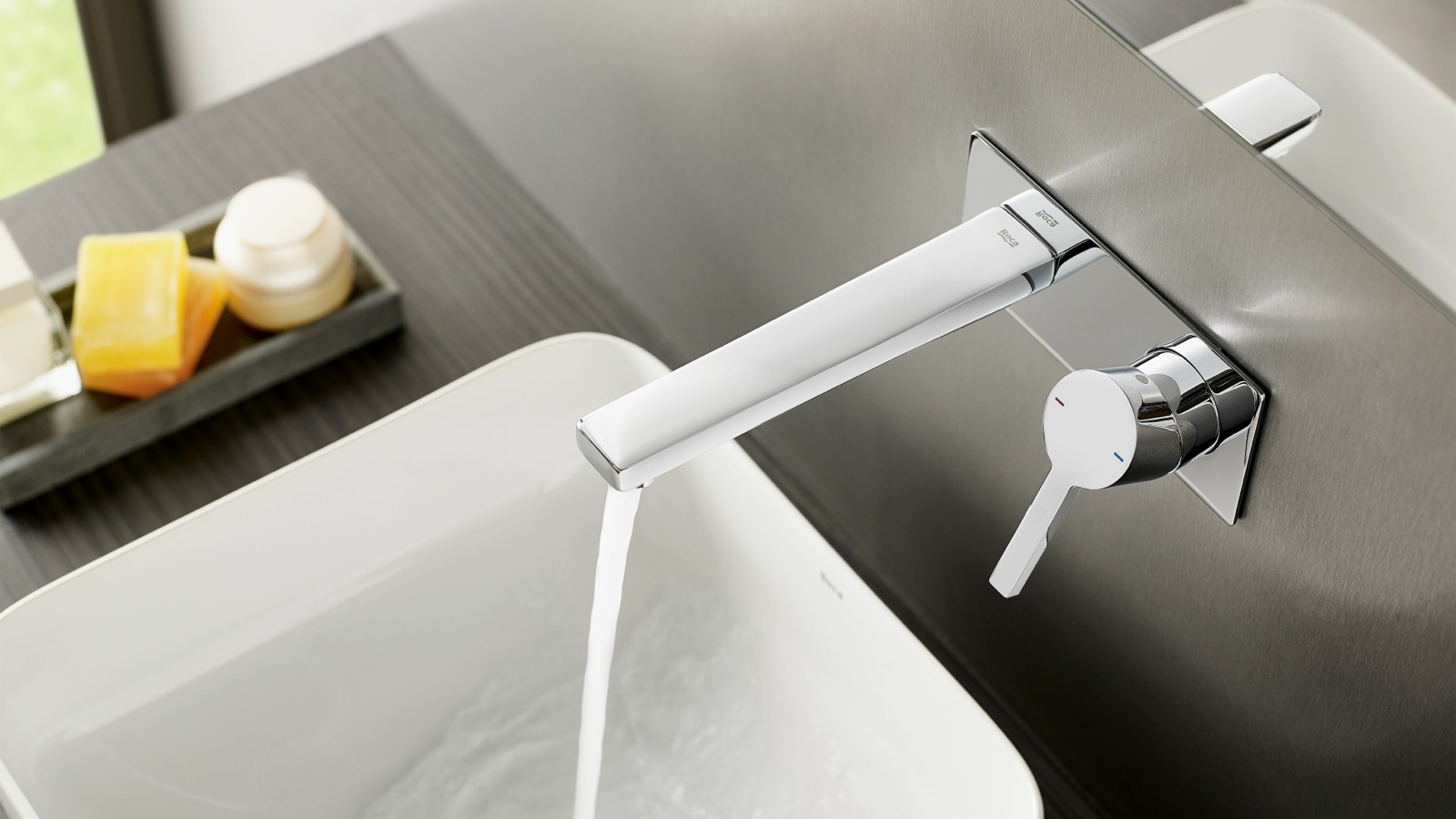 The Roca stand featured classical design with its Carmen range of sanitaryware, through to modern looks with Beyond and bespoke project basins with models from Bloc Hotel and Yotel.

However, brassware was also a key feature for Roca, which showcased Atlas, Naia and Insignia mixers, all featuring a cold start valve.

These were joined by Raindream shower heads, which boast EasyClean to prevent limescale build-up. 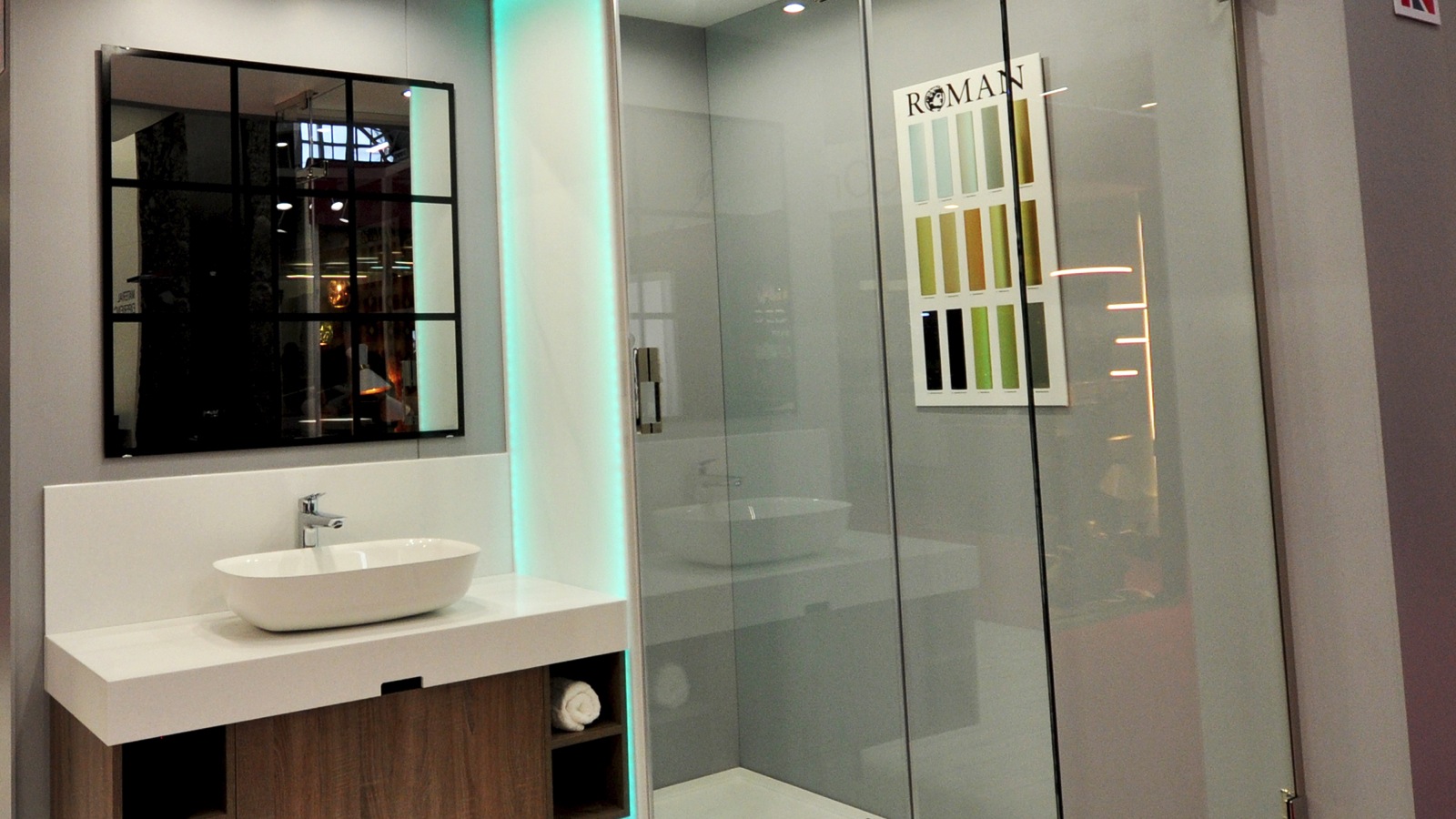 Showering manufacturer Roman showcased bespoke fabrication of enclosures and Corian moulding, plus its selection of finishes. 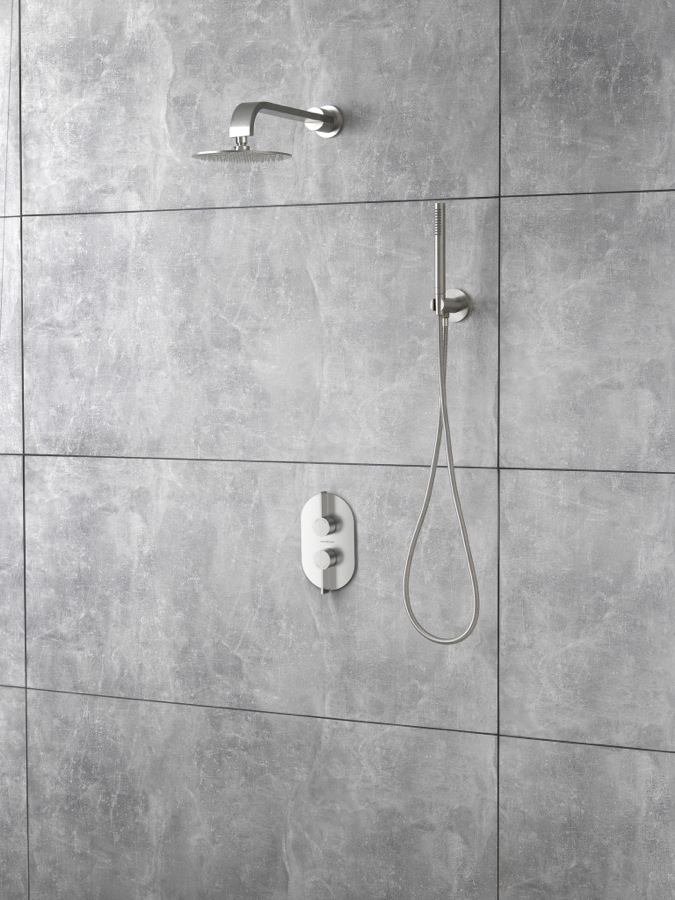 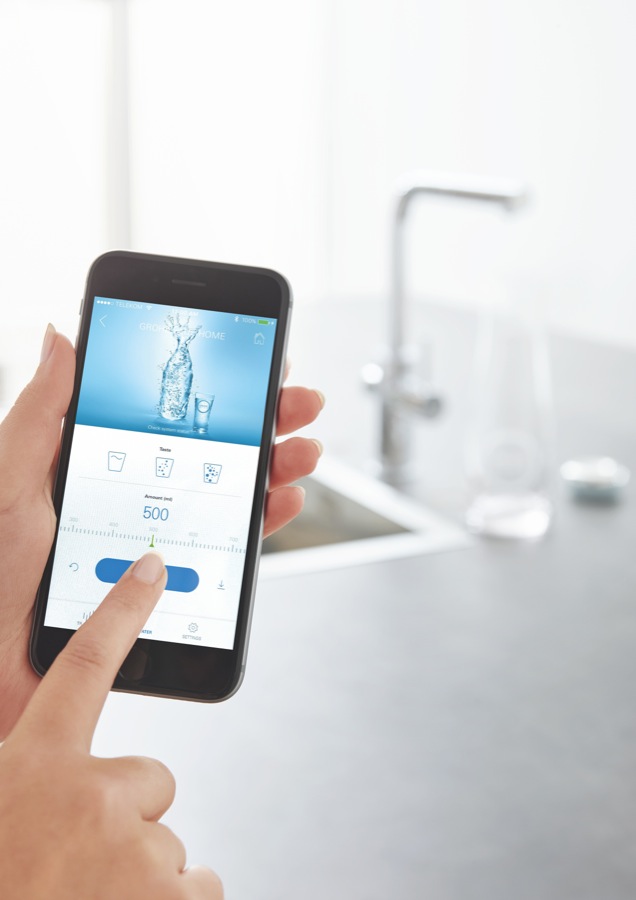 As Founding Partner, Grohe once again sponsored the VIP lounge which was based on experiential design.

It allowed visitors to get up close and better understand its instant hot water and Blue Home still and sparkling water taps.

However, the star of the show was the Blue Home with pull-out spray and App control to monitor filter and CO₂ bottle levels. 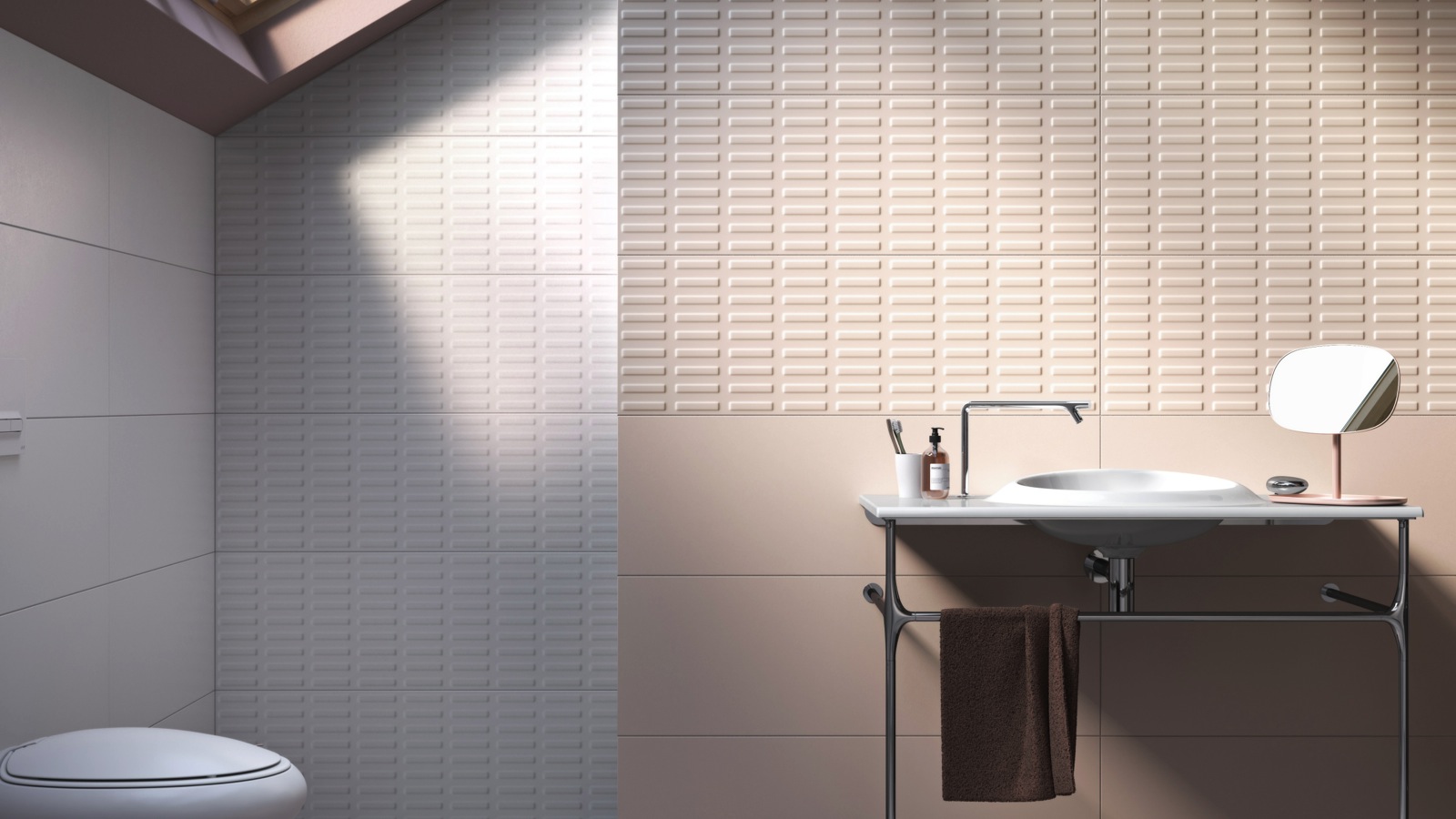 Shown first in the UK at designjunction, VitrA showcased its Plural collection designed by Terri Pecora.

Drawing on the heritage of communal bathing, it allows elements to be placed together, playing with differing forms – freestanding and surface mounted basins – and heights.

There were also additions to the Istanbul collection with a urinal and a vanity. 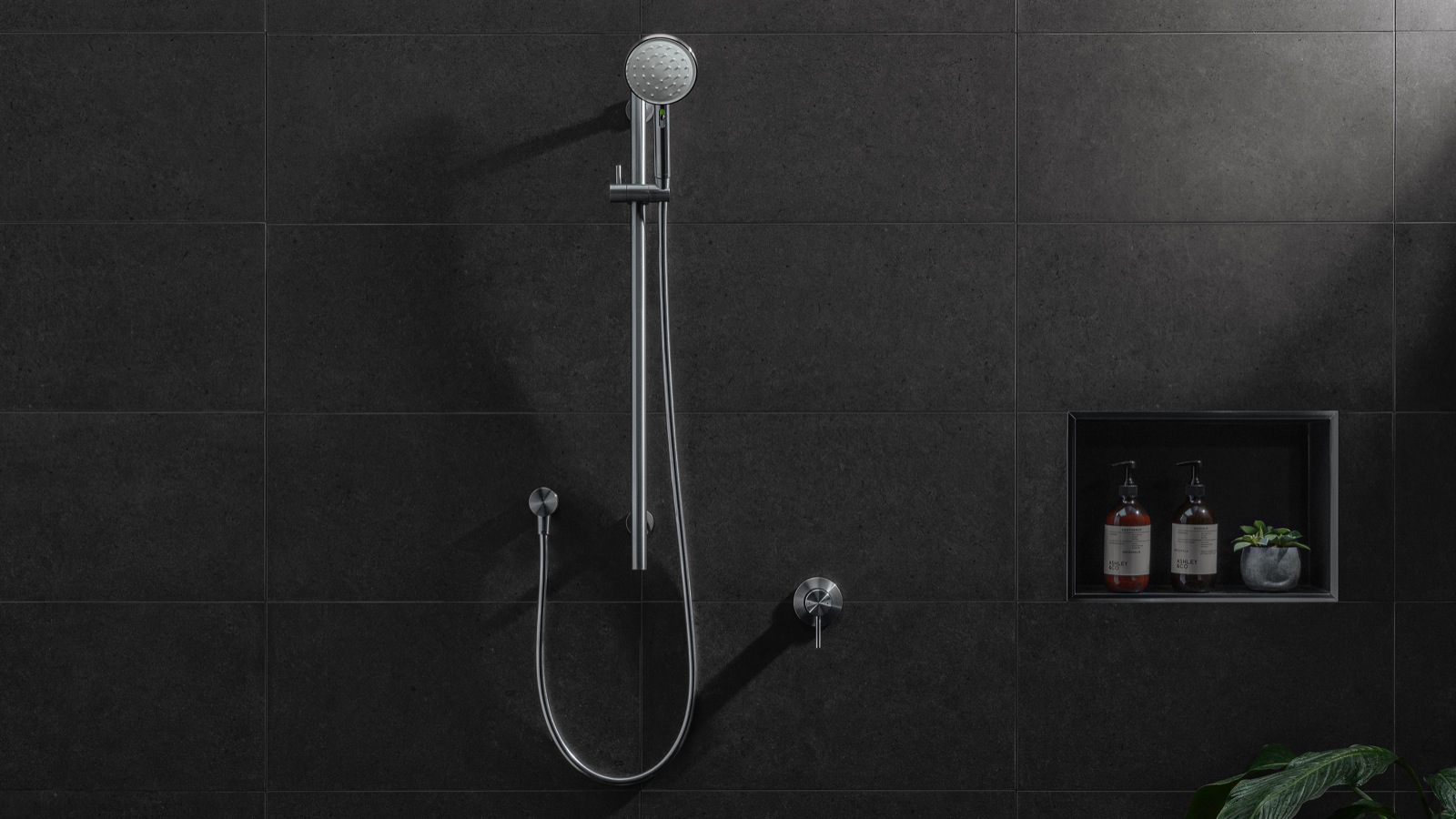 There was a live display on the stand to highlight the patented VJet technology, which allows for a variable spray pattern to be personalised for each user.

Manufactured from high-grade stainless steel, the handset has a lifetime guarantee. The shower is also able to deliver a water-saving flow rate of 9 litres per minute. Installed for the first time in the UK was the Aquamoon spa shower from Dornbracht, which retails at around £25,000.

It features four flow modes and lighting scenes from a concealed fitting within the minimalist ceiling dome.

Alongside, its sister brand Alape showcased its Aqua gloss and Terra matt finish for its glazed steel basins.

VIEWS: Director of sales and marketing for @RangemasterUK Iskender Diker offers his advice to kitchen retailers on… https://t.co/42RNFwcvKX

We have a date for KBB showrooms to reopen in England - April 12. Are you happy with the news? What does it mean fo… https://t.co/SUyKk9QPGP

Check out our feature on how cooker hoods have evolved into air purification systems https://t.co/toW2nWQR5B

NEWS: @Victorianplumb organic web traffic is worth £4.1million a month, according to research… https://t.co/Ga5AhRDI8l