Now you see it…now you don’t; why kitchens are out of sight but definitely not out of mind

Now you see it…now you don’t; why kitchens are out of sight but definitely not out of mind. Philippa Turrell reports 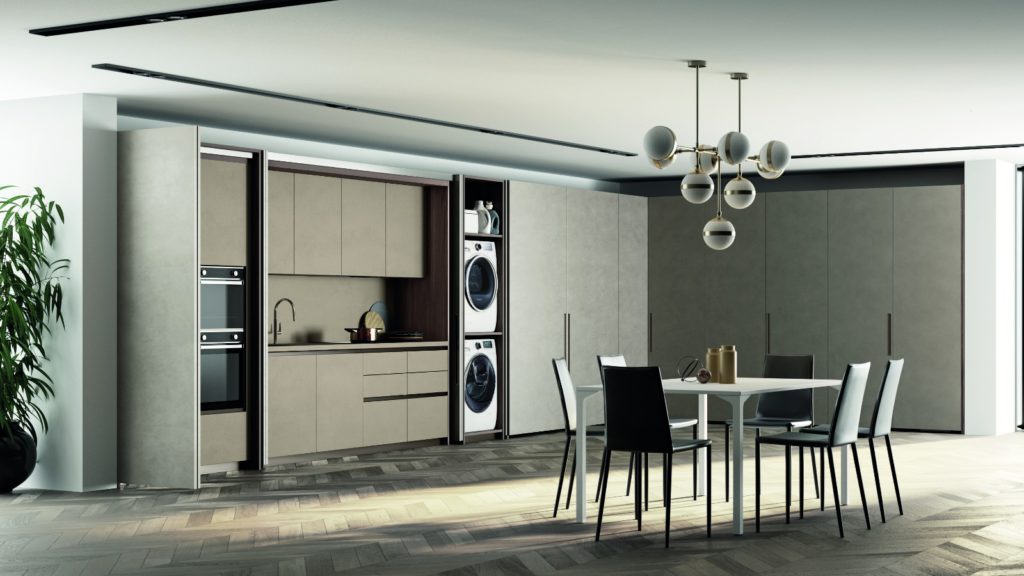 Box Life from Scavolini can be customised to create linear, corner or U-shaped solutions. It features retractable doors to conceal appliances or a laundry area to a pull-out worktop for extra prep space

When open-plan became a staple look for the home, kitchens were transformed to become a homogenous part of the ground floor interior design.

Hidden in plain sight, they have been designed to blend into the environment creating a seamless transition from living to working space.

Now this has been taken to the next level, as the kitchen can be installed completely out of view, and it is a growing trend in home design.

And his view is echoed by head of operations at Rotpunkt UK Matt Phillips who claims “the trend for concealed kitchens is on the rise.” 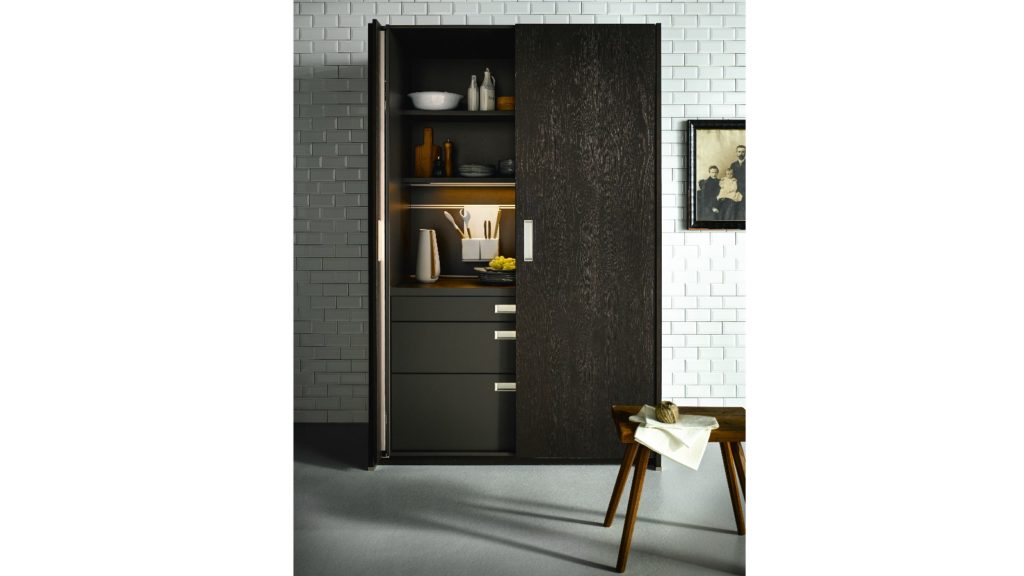 With Britain reportedly having the smallest homes in Europe, according to the Royal Institute of British Architects, it’s easy to see how the space-saving benefits of hidden kitchens would appeal to consumers.

Vittorio Naldi of Scavolini UK comments: “The addition of a hidden kitchen expands the look and feel of the living space.”

And Matt Phililps of Rotpunkt comments: “Generally speaking, we find that concealed kitchens can come into their own in city apartments where a functional kitchen is a must and space is typically at a premium due to the desirable factor.

“This style of discreet kitchen can also appeal to property developers who are transforming older properties into student flats, bedsits or starter homes.”

But kitchen designers would be mistaken, if they consider them solely as solutions for smaller and more cost-efficient homes.

Matt Phillips points out: “Although we might assume that concealed kitchens are most prevalent at the entry level , changing lifestyles and households mean you could find them at any level of the market.” 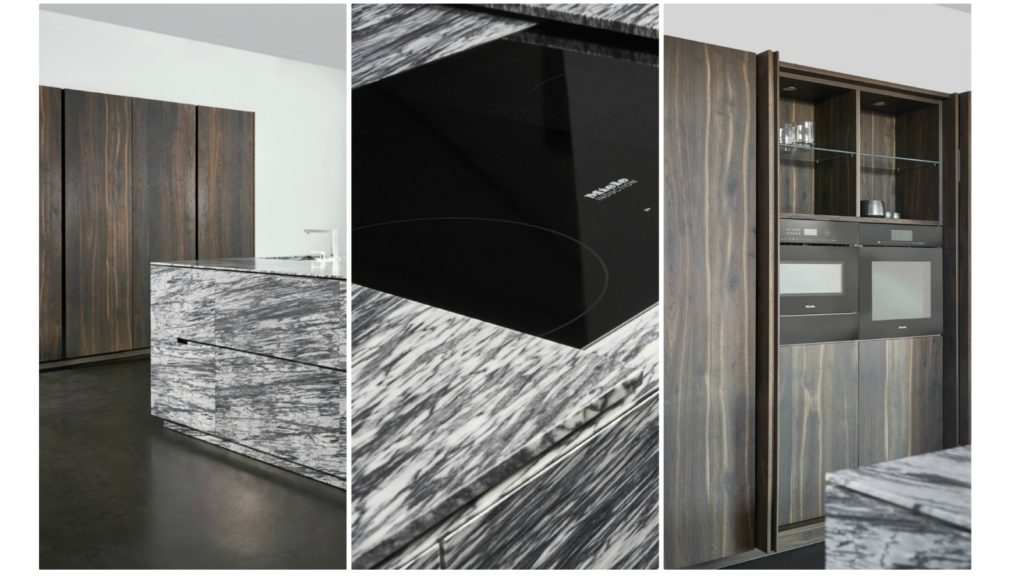 In fact, the concealed kitchen is equally at home in larger projects, offering a clean-lined aesthetic to an open-plan space.

Managing director of InHouse Wayne Dance comments: “While concealed kitchens are ideal for small space refurbishments, we will see real growth in the luxury refurbishment market.”

He adds: “Longer term and following an expected path, sales will instinctively work back towards the mid-market.”

Director of Eggersmann UK Daniel Bowler explains why the trend for concealed kitchen are taking hold in more prestigious developments: “Hiding the contents of the kitchen behind closed doors is obviously very beneficial in small spaces that can easily feel cramped otherwise.

“But it also creates a sense of harmony and relaxation in larger open-plan environments that are not just used for meal preparation but for socialising and general family life too.”

And area manager of Pronorm Don Ward agrees, adding: “Larger kitchens are often the hub for entertaining, so they can be used in the main kitchen area to enclose ovens and fridge freezers for a sleek and appealing aesthetic and to keep clutter out of sight when guests descend.” 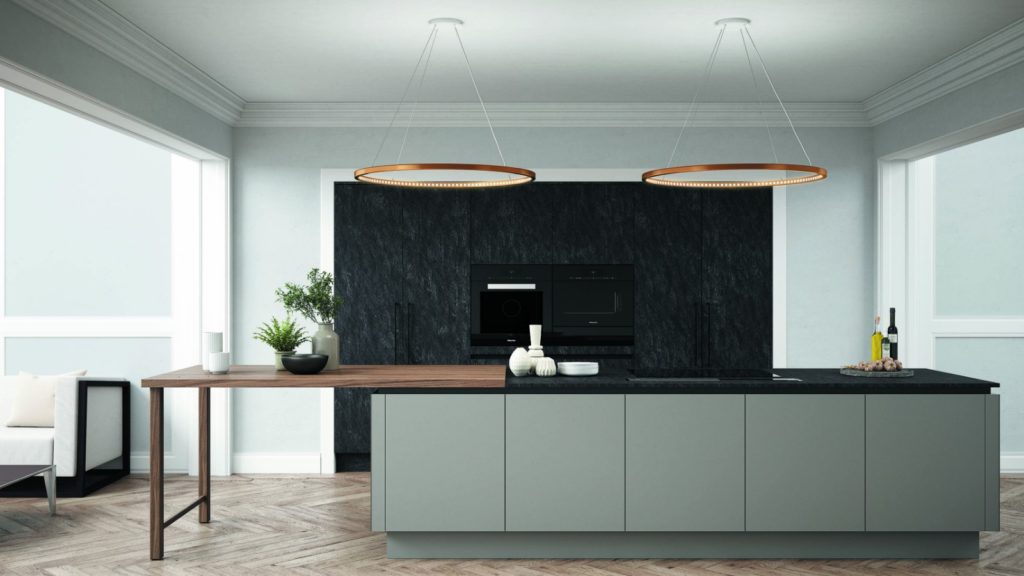 Part of its Part of Daval‘s Langham urban furniture style is the stone décor in a choice of light to medium grey Basalt and Slate (as shown). It is shown across a triple wall unit which houses a larder

Of course, designers can play with the idea of hiding parts of a kitchen, rather than feeling they have to slavishly adopt a completely concealed design.

Think of a hidden breakfast bar, such as the larder units now coming through in classic furniture.

Head of operations at Brandt Design Julia Steadman continues: “The idea of a concealed kitchen can be appealing across the board.

“There is scope for bringing elements of the concealed kitchen into a more traditional open-plan design, so the prep zone can be screened off from the dining area and essential cookware does not monopolise counter top space.”

“The very point of this concept is in having the freedom to choose when to access or conceal the kitchen space. Don’t imagine this to be a design short cut.” 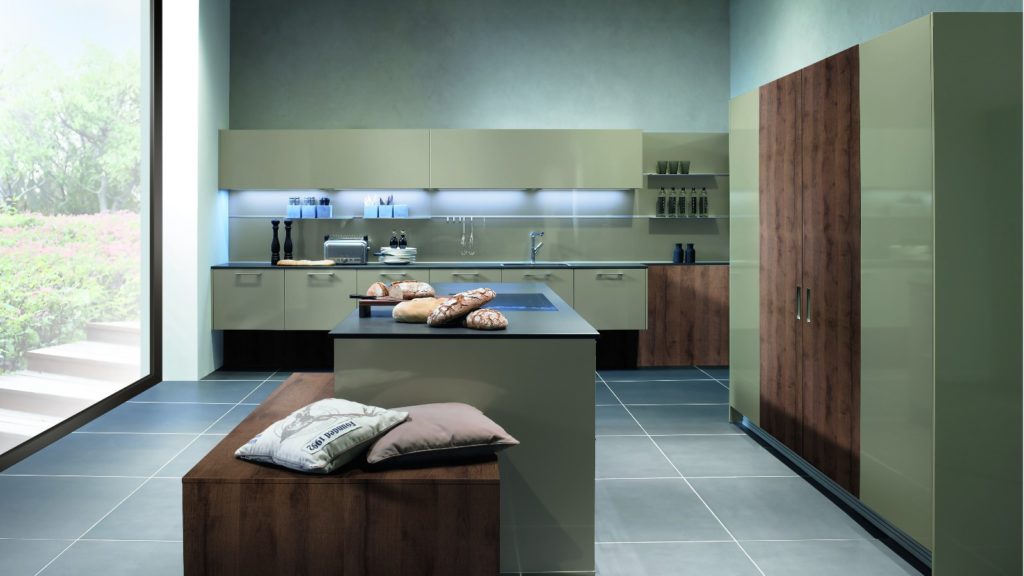 The Proline kitchen from Pronorm combines Cubanit Gloss doors in organic green with End Grain Oak pocket doors in laminate. The pocket doors boast a safety feature to prevent the doors being closed while the concealed appliances are in use

Although tempting to consider a closed off design is a simplified version of a kitchen on show, accomplished designers will be aware they require pin point accuracy and fulfil additional safety concerns.

While considering plumbing and electrics early in the scheme is a given across projects, Marr Phillips reminds designers: “Double-checking measurements is vital, as there will be little leeway for error in a concealed design where every component must fit flawlessly behind closing doors.”

And unlike kitchens which are on show, there are additional safety measures which must be considered.

Don Ward of Pronorm points out: “If there are ovens concealed behind furniture doors, it’s essential that there is a switch or mechanism which alerts the user if the oven is left on should they close the doors. The safety switch should kick in and automatically switch off the oven.”

He continues explaining ventilation is also key: “If fridge freezers are concealed behind doors then sufficient air venting should be allowed through the plinth to enable the unit to work correctly.”

Interestingly, the trend for concealed kitchens isn’t fleeting and these type of projects are becoming entrenched in home architecture. Industry experts agree.

Managing director of Daval furniture Simon Bodsworth states: “In my experience, concealed kitchens are an evergreen design. The challenge likes in making sure that they are relevant to our kitchen and living spaces each time as lifestyle change.”

And Julia Steadman of Brandt Design agrees, adding the concept is “revisited every decade.”

However Don Ward believes there are lots of sales to come from hidden kitchen projects: “I think we are still in the early stages of the concealed kitchen look, even though the design concept has been around for a while.

“The most popular elements are large doors that will reveal and conceal cooking appliances. Most mainstream manufacturers are offering concealed elements within their range now, which will encourage wider aware ness and consumer adoption of the style.”

“Given the desire for increasing flexibility in terms of finishes, storage and layouts, a deep understanding of both open and concealed modular kitchen concepts is vital.”

So, hidden kitchens are anything but a disappearing act for up-to-date home architecture.

Read more on furniture trends, such as the industrial kitchen.

JUST OUT: Mereway Kitchens introduces Q-Line with door and drawer units in 1600, 1800 and 2000mm widths… https://t.co/HpaiLlFpRo