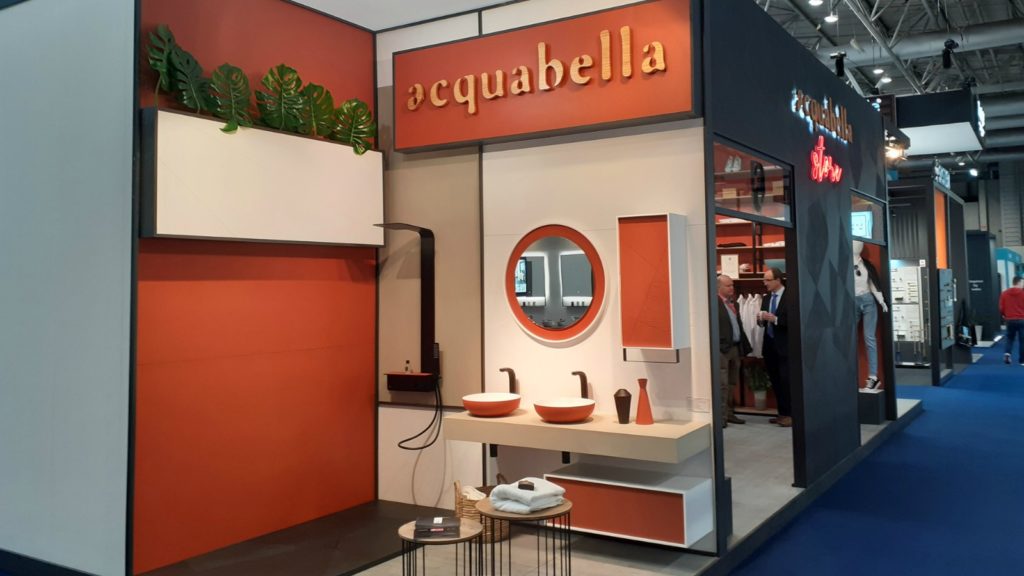 Can you remember the time when we could leave our house, gather in groups and network without the aid of a computer or mobile phone screen?

This was merely weeks ago, yet may already feel like a lifetime to independent kbb showroom owners trading in a new, remote retail landscape.

It’s hard to believe it was only in March around 15,500 visitors gathered to view the offerings of more than 400 exhibitors at the NEC and reported a record number of visitors on two days of the show.

It’s also incredible to consider this could be the last hurrah of suppliers showcasing their products, face-to-face to their network, for some time.

While the trading environment may have changed, it’s now more important than ever to look at how to adapt and evolve retail businesses.

Some ideas, such as remote CAD services, may have already been embraced, and much earlier than they previously imagined by owners of kitchen and bathroom showrooms.

While others, perhaps embracing presentation concepts showcased by Acquabella and Franke at the exhibition, may obviously take longer to embrace in store.

But retailers and designers must keep on top of what’s new for kitchen and bathrooms, as consumers need home inspiration now more than ever, with their only scenery being four walls of their own house.

When social distancing barriers are lifted, which they will be, consumers who have been cooped up at home will be fully aware of the limitations of their kitchen and bathroom.

They will have had more time to consider what they require of these spaces and been able to spend more time on researching products and looks that better suit their requirements and lifestyle.

So here we offer an overview of the exhibition, to help keep retailers on top of products and designs which will include future (and hopefully), plentiful projects. 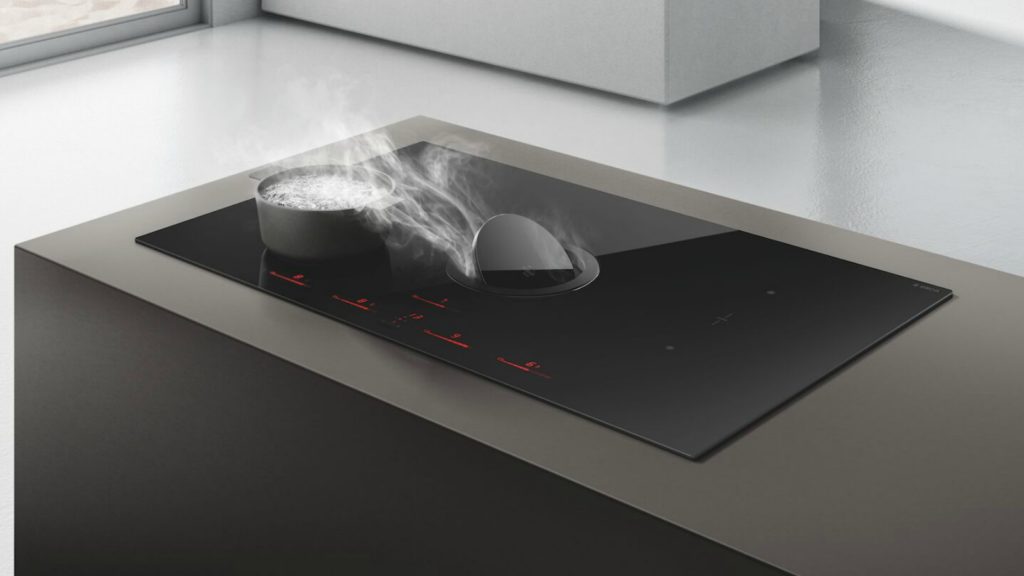 The Nikola Tesla range includes duct-out and recirculation models, with filters accessible from the countertop.

These were joined by Skydome and Hilight ceiling hoods boasting illumination for 160 and 300mm depths. 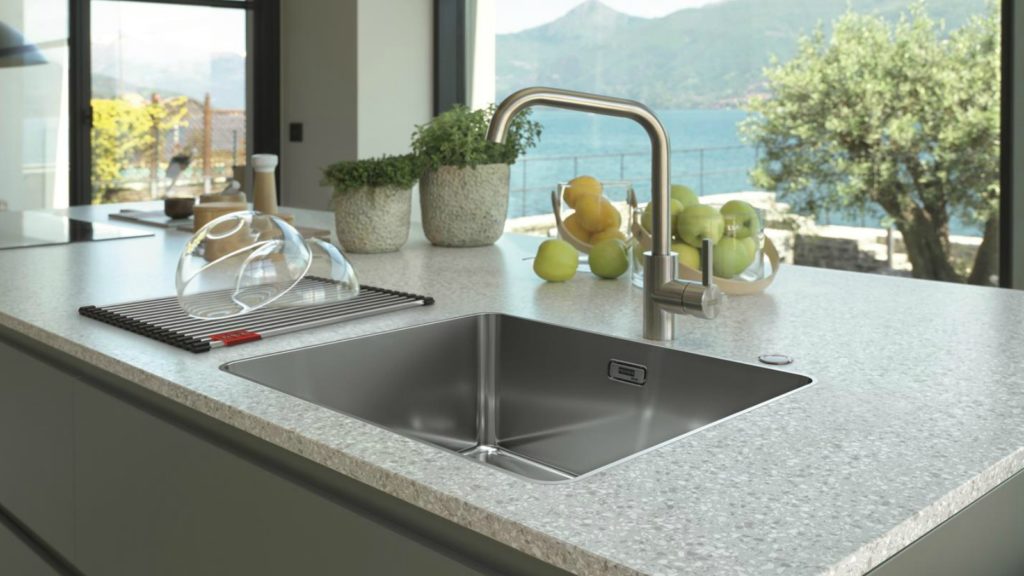 On a new international stand design, Franke showcased its Mythos MYX and Urban UBG Fragranite in Monochrome colours, an extension of the award-winning Box Center BWX range, as well as introduced its latest decorative hoods.

The hero launch of the event was the successor to the Kubus undermount sink, Mythos MYX which comes in eight undermount options plus four inset models.

It can be installed as an inset Slimtop or a true Flushmount, with a polished slimline 6mm rim visible on the worksurface. 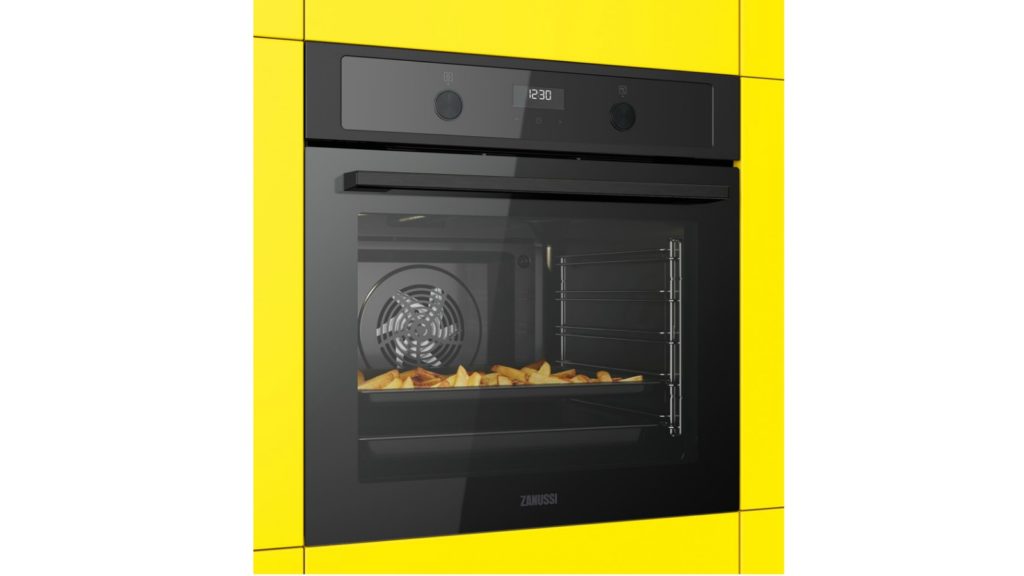 As part of a European-wide launch, Zanussi returned to its yellow branding and introduced its Bright collection of appliances with a nod to its revised marketing.

In addition, the Bright range included dishwashers with AirDry technology, to prevent odours in the appliance. 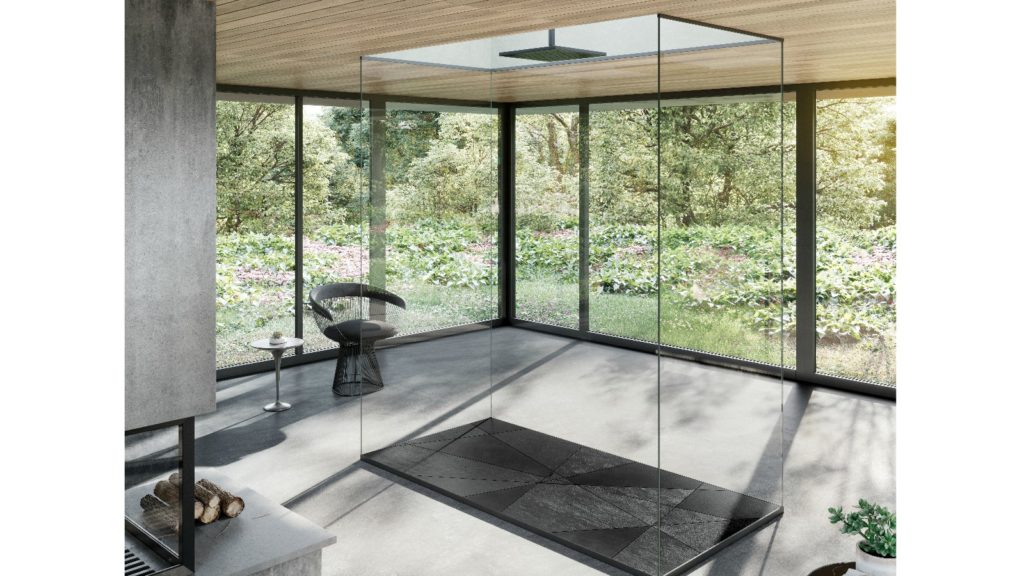 On one of the show’s award-winning stands, which was based upon a fashion store, Acquabella unveiled its Smart Quiz shower tray.

It features a design that consists of three high-definition finishes, created by Acquabella – Beton, Zero and Ethnic textures.

The shower tray has a drain hidden in the centre, with a grating that is fully integrated into the shower tray.

InSinkErator used kbb Birmingham to introduce Neochiller, for its 4N1 range of filtered taps, which provides up to seven litres of chilled filtered water per hour.

It also took the opportunity to preview Modern 3010 and 3020 taps, a collection of additional steaming hot water taps in six metallic finishes.

They are supplied with the NeoTank instant water heater which has a capacity of 2.5 litres and has been designed so it doesn’t take up too much cupboard space. 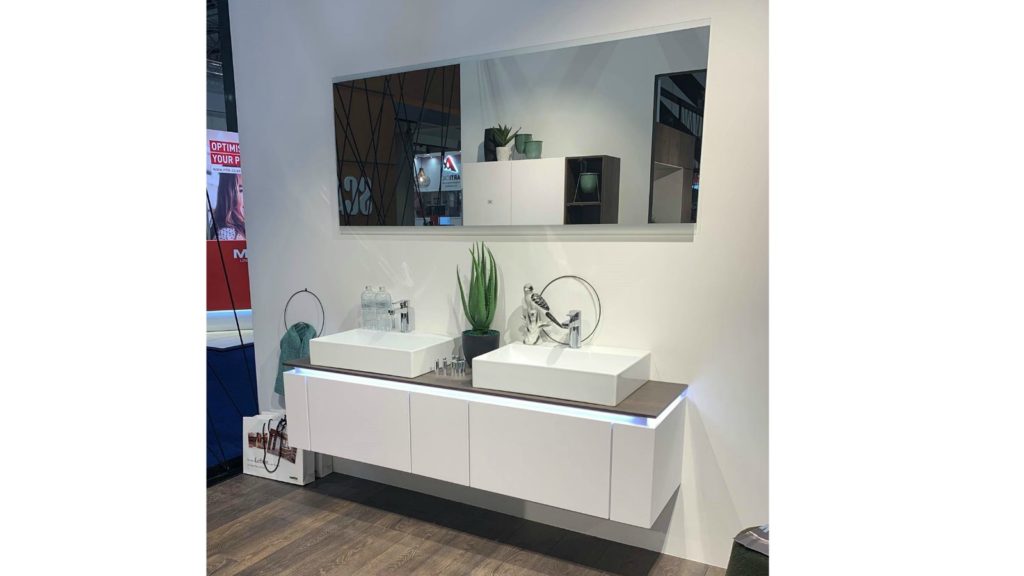 It showcased the trend for shades of grey and black, such as its latest Platinum Grey high gloss lacquer, combined with warm woods for kitchens.

This was joined by Nolte Spa which includes washbasin to mirrored cabinets, laundry units and lighting. 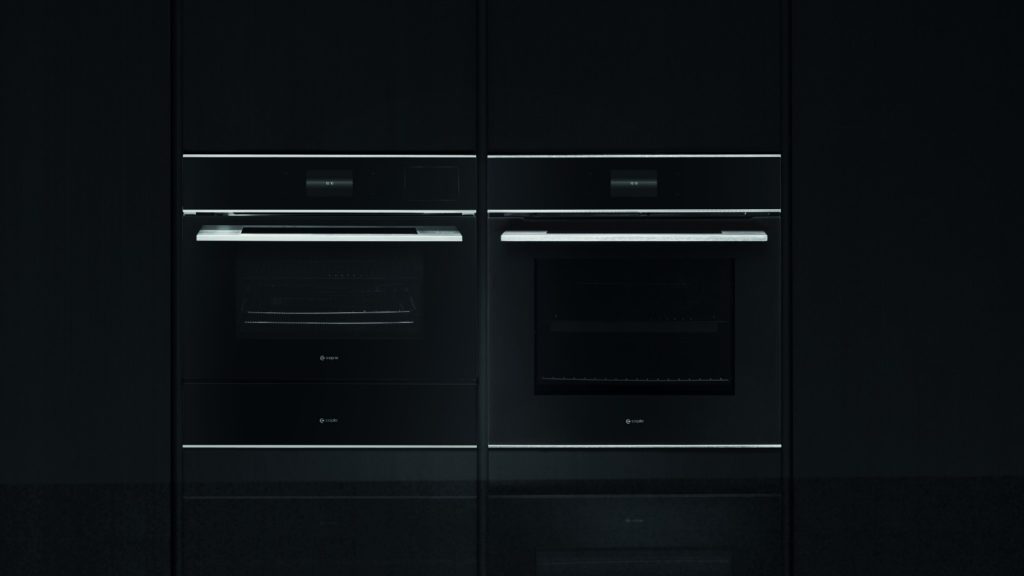 On a Japanadi-influenced stand, Caple unveiled 22 products spanning sinks and taps through to cooking, cooling, laundry and dishwashing appliances.

However, a hero of the stand was connected ovens, which were added to its Sense Premium range, in a choice of glass, gunmetal and black.

These Wi-Fi ovens were supported by its own Caple Home app offering multi-stage cooking, pre-programmed recipes for the British market and the ability to save favourite settings. 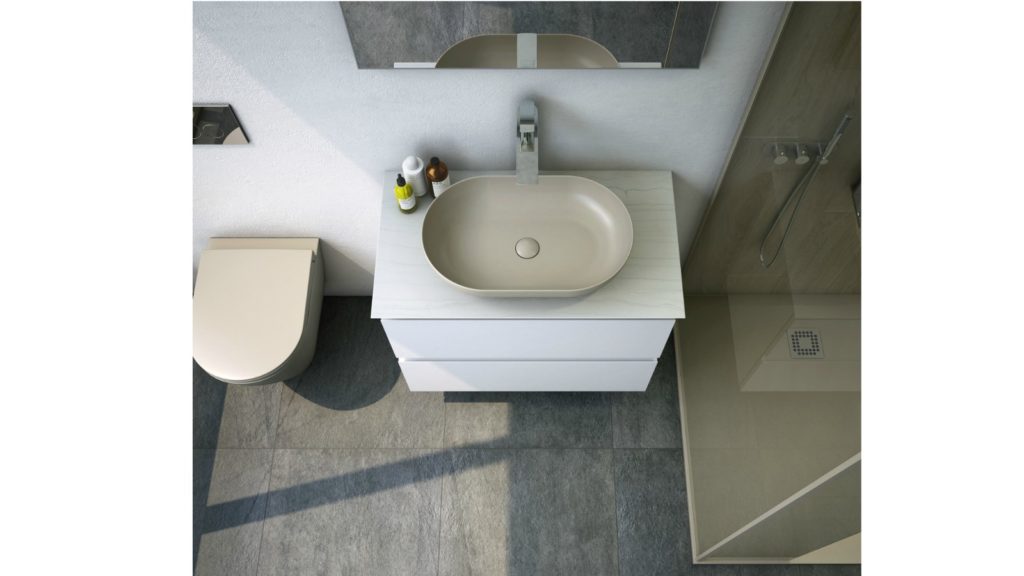 The story of the RAK Ceramics stand was colour with the introduction of RAK-Feeling, a collection of co-ordinating sanitaryware, shower trays and brassware.

It is complemented by a range of vanity furniture. 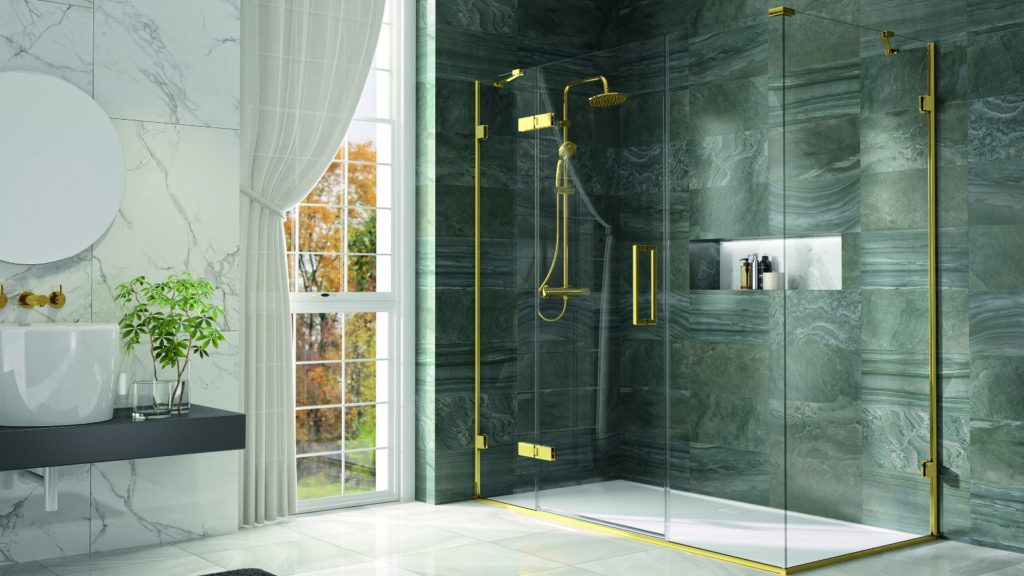 It was shown on the Arysto Ten Hinge enclosure alongside a range of accessories in complementary finishes.

Made from 10mm glass, Arysto Ten is a premium range of shower enclosures.

NEWS: @officialbikbbi offers tradespeople advice on what they can and can't do when working in peoples' homes.… https://t.co/7PXI6FcAvl