Commercial director of Bushboard Neil Horton explains what it means to become part of the US-based Wilsonart Group, and how it plans to introduce a laminate to rival sintered stone.

Established in the 1930s, Bushboard started life working with Bakelite for the electronics industry. In fact, it wasn’t until the Post-War era that it started to resemble the company it is today, producing laminate worktops.

Now, the company manufactures laminate, solid surface and quartz to offer a range of engineered surfaces.

Wellingborough-based Bushboard manufactures Omega and Options laminate worktops, as well as Encore-branded engineered solid surface. It is set to expand its offer with a solid laminate surface – Evolve.

Commercial director of Bushboard Neil Horton explains: “The business started in 1935 and was in all sort of hands until 2000 when it was acquired by the last management team who held business for 17 years. They built it from about £6million to £26million turnover in that time.”

The company was then sold to USA-based Wilsonart.  It means Bushboard is now part of a $1.2billion turnover group, which operates in more than 100 countries, manufactures in 16 locations across the world, and employs more than 4,500 worldwide (with roughly 1,500 of those in Europe).

It sees the company become stablemates with the company formerly known as Direct Worktops, now rebranded as Wilsonart in the UK, and most recently, Mermaid and Shore Laminates through recent acquisitions.

However, it is also in the same international group as French Polyrey and German company Resopal. And this has been a great fit for the Bushboard business which uses Polyrey and Resopal to manufacture its worktops.

Neil Horton explains: “When the shareholders of the business were looking to sell it on to a company, they were seeking a company that would not change what we did. We built a very strong business, a very ethical business. 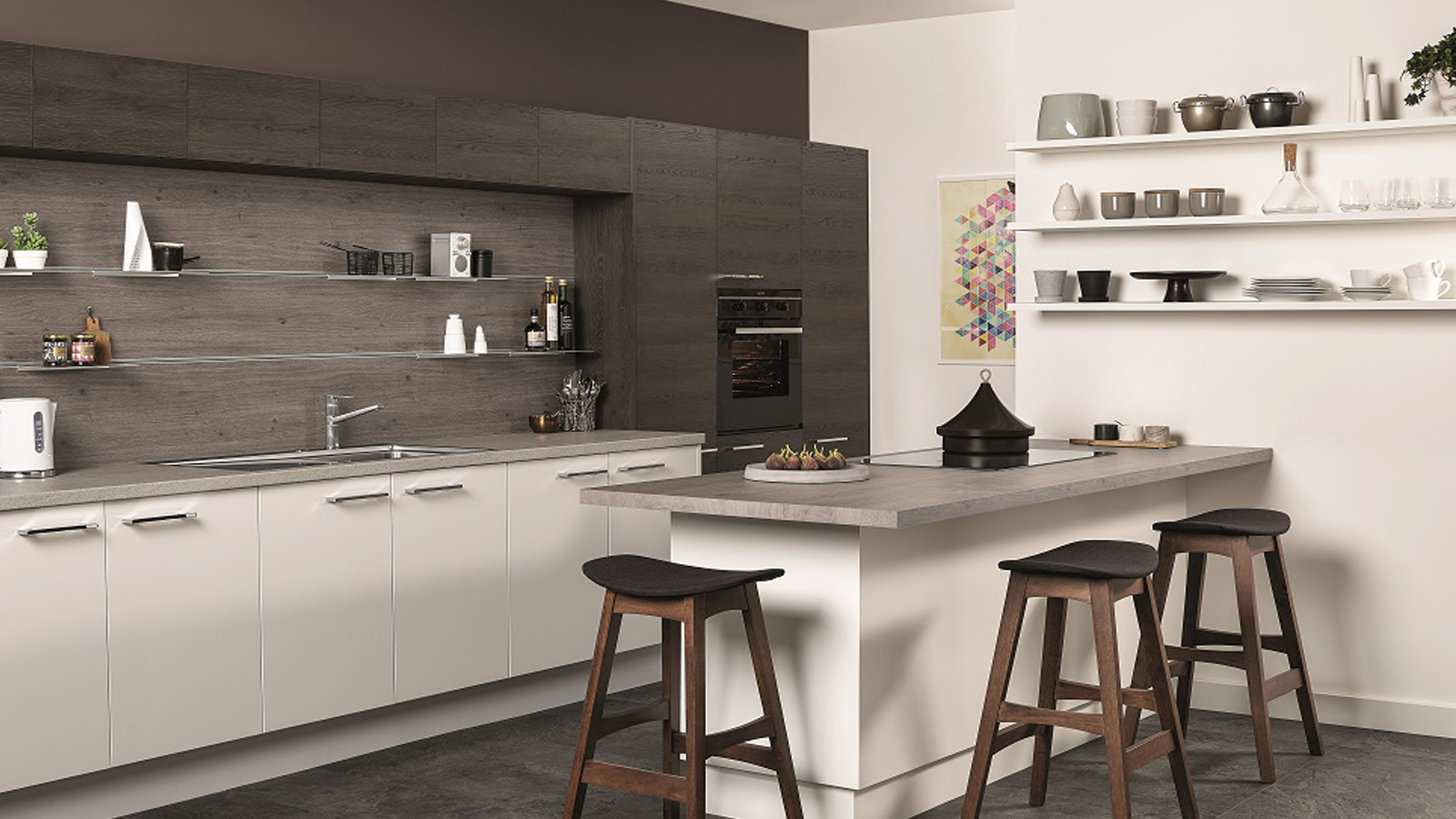 As part of its Omega brand, Bushboard introduced a new collection of worktops in a choice of 50 décors and six textures. The worktops come in 38mm or 22mm square-edge options, and with end-grain detail on edging strips.

“The Wilsonart group was very clear there would be no changing the way that Bushboard operates. They were buying a management team, a brand and products, not just a manufacturing facility.”

Explaining why it has been beneficial for its kitchen showroom customers too, he adds: “It enables us to run faster and bring new product to market and invest in people to support retailers. It gives us the punch behind our business that will support us to grow.”

Neil Horton confesses customers may have been nervous following the acquisition, which slightly affected revenues. Now, they have now seen nothing has altered, businesses have carried on as usual.

But, in reality, the Wilsonart ownership has brought changes to the business, which will benefit its kitchen showroom customers. 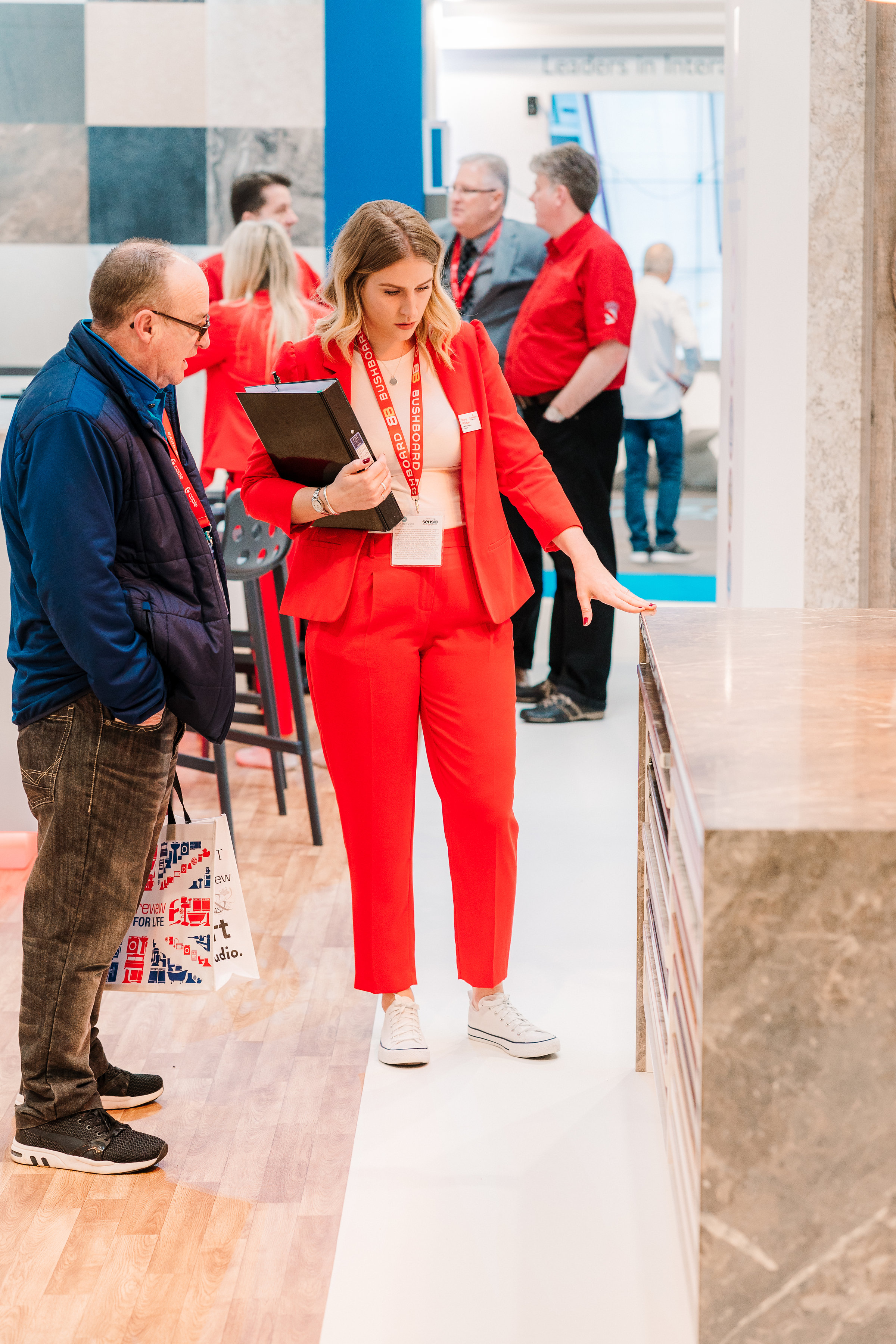 Following its acquisition by USA-based Wilsonart Group, the story of the Bushboard stand was it was still the same company – just bigger and better

The company has invested in the factory, to improve speed to market, added to its distribution base with JP Distribution and also in product innovation.

Horton adds: “All of our investments over the past two years have been in robotics because of the speed we have to produce our products.”

In fact, the company has invested £1.5million into its bathroom wall panelling production, with a new line being installed in summer.

In fact, the bathroom sector with its Nuance wall panelling brand has been a huge success for the company. So much so, Horton confesses at times it has struggled to keep up with demand.

Just one of its Nuance decors had sales of eight times its forecast, but the investment in production of the panels will enable faster delivery to market.

“We have had issues over the years with Nuance, which we launched in 2009, of just not managing to keep up with demand. It launched again in 2012 with new decors and we’ve seen exponential growth,” says Horton.

Horton explains how the bathroom panelling has become the largest part of Bushboard’s business: “In revenue terms, it’s growing 30-40% every year, year in, year out.” 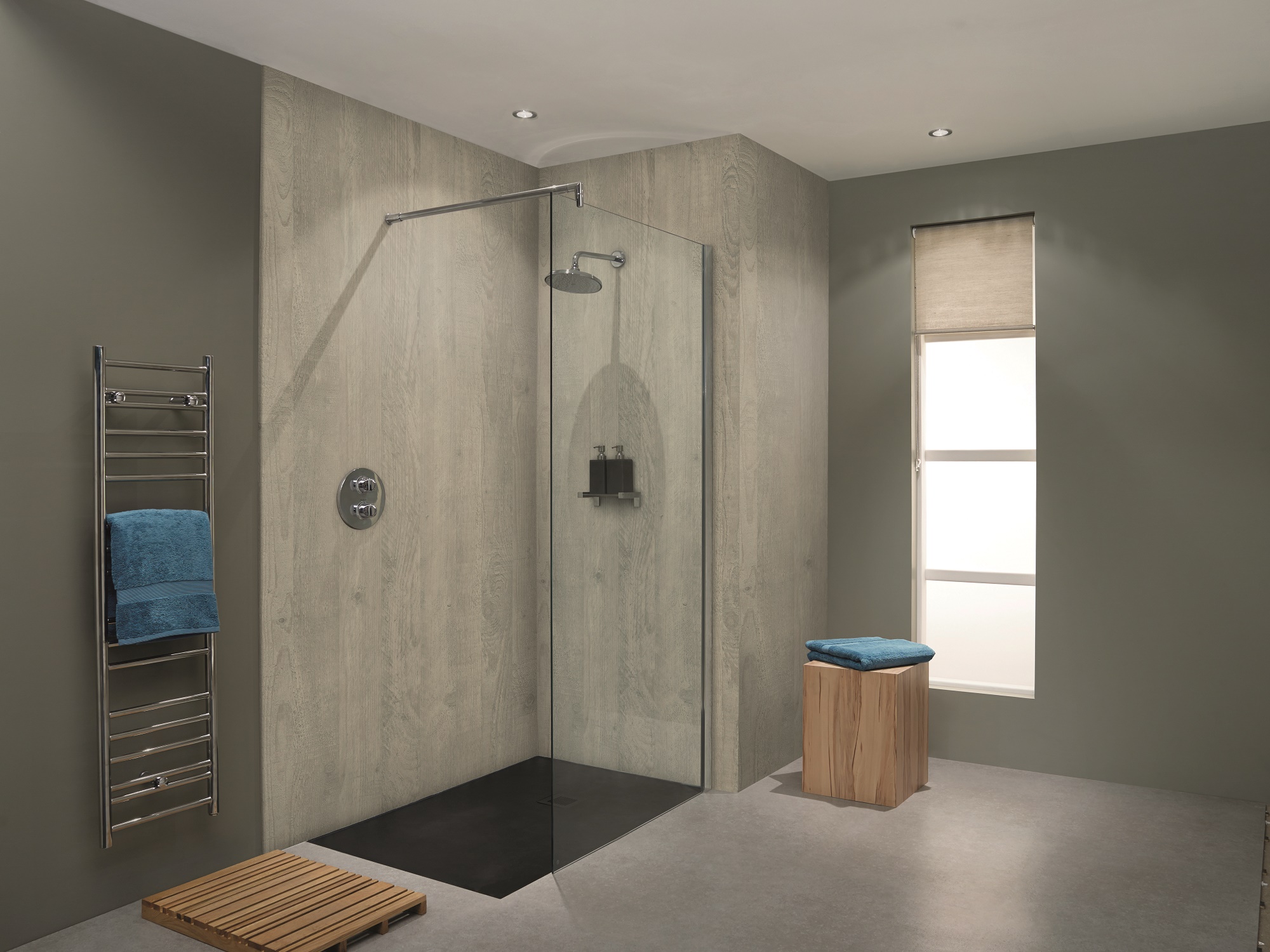 Bathroom panelling now accounts for the largest part of the business. In terms of revenue, it has grown by 30-40% every year

The market for wall panelling was “dying from the bottom up,” explains Horton, who said it was just treated as a low-cost and quick way of covering a bathroom wall.

However, having “swum for the blue water,” as Horton describes it, Bushboard helped create aspirational, design-led products as an alternative solution to tiling.

“We saw an opportunity to use laminate properly in the bathroom. but we had to solve three issues. The first one, quite simply, was design. The second was we didn’t believe in MDF or Plywood as a core substrate. We wanted a 100% waterproof core. The third was we didn’t want to use metal times so we created a post formed edge.”

He continues: “What the market was selling on was ease of installation, quick installation and ease of cleaning and we sold on design. The product looks fabulous – why wouldn’t you buy it?

“Then, not only does it look great, it’s still easy to install. It’s actually easier because you don’t need trims, and if you make a mistake on installation and water gets into the panel, it is waterproof. It meant the retailers embraced it.”

Not content to create a new market for wall-panelling, Horton explains how the company now plans to create a laminate worktop to compete as an alternative to sintered stone.

Leveraging the experience of Wilsonart, with its Zenith solid laminate range, Bushboard is on the cusp of launching a version which has a more high-end look with Evolve.

The 12mm solid laminate can be routered for undercount sinks and drainer grooves, like Zenith, but comes in a choice of core colours.

“It isn’t totally scratch-proof like ceramic is, but there is a massive price difference. It performs better than a HPL worktop.”

The Evolve solid laminate range will include 13 printed decors, with two that are anti-fingerprint finish. Horton adds: “Plus we are adding acrylic, glass-effect splash backs.” 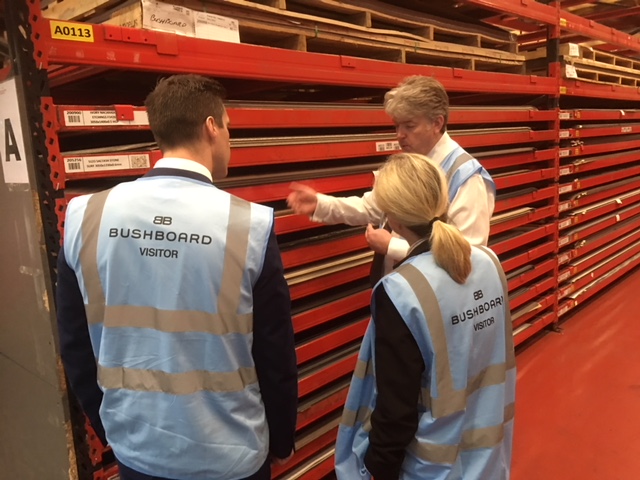 Commercial director of Bushboard Neil Horton explains to Kitchens & Bathrooms News how the company plans to invest in production. It will be adding a robotic line for its Nuance bath panelling during the summer

And Horton explains how Evolve follows the missions of the company, stating: “It’s about giving high-end design to the majority of the population.

“Like in everything else we do, it looks like products that are far more expensive but is affordable. We are really excited. This is going to be a big success for us.”

He explains solid laminate will be a success for the company because it enables some retailers to trade up, with others who deal in the premium sector to offer a price-conscious alternative.

“Over time, the average order value for those showrooms have been increasing, so we have to find products which easily move them on to laminate or easily move them into areas where they are able to grab more orders because they have more products for those customers.

“We have retailers who say I could do with more work, but I’ve got no way of pushing down. When we say we try and find a product that suits a customer’s budget, that gives them a product they are really pleased with but at the right price point, it enables retailers to access other price points”.

And Horton continues stating how it could actually make for a more profitable sale for kitchen showrooms: “What’s always worried me about Quartz granite worktops is they are very expensive. If a customer has limited spend, is the retailer making the margin they should on that worktop or discounting to get a sale?

“Or is the customer’s budget squeezed to a point that spends doesn’t come in on appliances or furniture because the worktop is important?

“For me, it’s about finding them a way of giving them a worktop, which frees up spend on appliances and furniture, in particular furniture where retailers make a margin.”

Together with its Nuance bathroom panelling, Horton states Evolve will move the business and the market on this year.

He exclaims Bushboard is confident that it has established a high level of trust with its retailers, so believe it will have a buy-in from the start, initially with its Encore solid surface dealers.

He explains why: “Laminate worktops are really good value and perform really well, the design is good, the texture is good but consumers want something a bit better. Per linear metre, sintered stone is expensive.

“The Holy Grail is finding a price point in the centre and that is what Evolve does.”